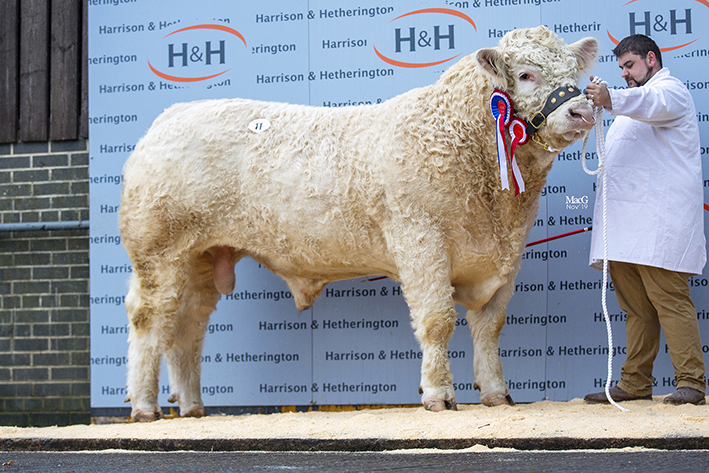 A small but high-quality offering of Charolais bulls saw a high of 5,500gns and an average of £3,525 for the seven bulls sold at Borderway Mart on Friday 22 November.

Top of the lots at 5,500gns and star attraction of the day was the supreme and male champion from Jan Boomaars, Woldringham, Surrey. Vexour Otto an April 2018-born son of the 16,000gns Woodpark Longbow and Vexour Fairlady, who goes back to the Carlisle reserve intermediate champion Maerdy Tally, was purchased by G McClanachan and Sons, Torthorwald, Dumfriesshire. 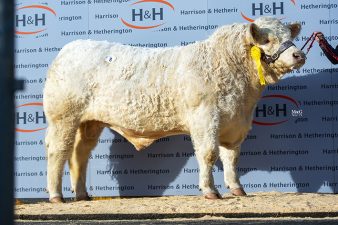 Next in the trade stakes at 4,200gns was Balmyle Ovation, who goes on to work in Blyth Bridge, Peeblesshire, for new owners T Walker and Son. He was awarded a blue ticket for breeder and exhibitor Bill Bruce, Meigle, Perthshire, at the mornings show and this 19 month-old lad is out of Balmyle Jade, a Royal Highland Show supreme champion Balmyle Eclipse daughter, and sired by the 16,000gns Ovill Lennon. 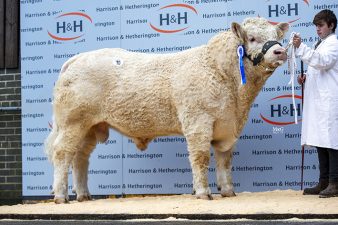 The aforementioned Jan Boomaars was in the money again just moments later with his reserve male champion and April 2018-born Vexour Owen. Also sired by Woodpark Longbow, his dam Vexour Jitters is a daughter of the 13,000gns Stirling supreme champion Newhouse Emperor. He was knocked down sold to JD Quigley and Sons, Beattock, Dumfriesshire, for 3,000gns. 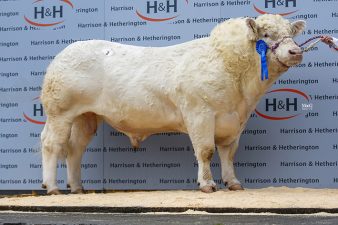 Two bulls then came under the hammer for 2,800gns a piece, with the first being Ballakilley Ollie. Ollie who stood second in his class in the pre-sale show, is no stranger to the show ring having previously been awarded the overall supreme champion at the Isle of Man Southern Agricultural show. By Alwent Goldbar, this 22 month-old is out of Ballakilley Fairlady, a Sang-D’or daughter, was offered for sale by Jonathan and Jennifer Quine, Bride, Isle on Mann and purchased by C and MA Douch, Pum Saint, Carmarthenshire.

The other making this money was the 19 month-old Whitecliffe Oscaro, who is the by the 31,000gns Carlisle reserve supreme champion Whitecliffe Highlight. His dam is Whitecliffe Hetty, a heifer by the 10,000gns Stirling supreme champion Chunal Dougie, and R Gill and Son, Sabden, Lancashire, were the final bidders, purchasing him from Mark and Jane Hayhurst, Kirbymisperton, North Yorkshire.

The Hayhurst’s other lot Whitecliffe Oliver who sold in a 2,500gns deal to WJ Irving and Co, Dalbeattie, Kirkcudbrightshire, was also a Whitecliffe Highlight son and this February 2018-born lad is out of the Whitecliffe Tyrone-sired Whitecliffe Doris.

Another Yorkshire entry, this time selling for 2,700gns was Jean Atkinson’s red ticket winner Bassett Oliver from Thorpe Bassett. The breeding here includes Whitecliffe Lacroix on to the home-bred Bassett Hannah that goes back to the 10,000gns Harestone Domino, and this 20 month-old was the pick of G Hodge, Abington, Lanarkshire.

The draft from the Lawersbridge herd of David Smith and Sons, Mauchline, Ayrshire, saw the only females sold through the sale and their two top lots both made 2,300gns.

First up was the mother and son pair Lawersbridge Minx and Lawersbridge Pirate who were purchased by J Johnston, Sorn, Ayrshire. Minx is a three year-old first time calver by the homebred Lawersbridge Iceberg and out of Redheughs Eba, who in turn is sired by Balmyle Brinstone, her six month-old son Pirate is by Whitecliffe Muskateer.

Their next cow and calf outfit Lawersbridge Molly and her daughter Lawersbridge Penny, were knocked down at the same amount, this time selling to Frank King, Newry, Co Down. Molly is another three year-old daughter of Lawersbridge Iceberg who is bred out of the Smithston Elite-sired Lawersbridge Gypsy and her nine month-old heifer calf Penny is also sired by Iceberg.