Charolais once again sold the highest number of bulls as well as producing the biggest average of all breeds sold at the Spring round of the Stirling bull sales. They also matched the top price of 25,000gns not once but twice, sold a total of 117 with 15 bulls to five figures and a strong commercial interest saw 74 sell for 5,000gns and above. The breed’s average of £6,633.85 was up £571.18 up on the year while the clearance rate was 79% at the sale on Tuesday 18 February.

Society CEO Peter Phythian was delighted with the day’s trade. He said “The great prices we have had today is a reflection of how well Charolais sired steers and heifers are selling in the store mart. We are just starting to see buyers looking at the myostatin status when purchasing bulls and are being more conscientious of how they select them. With profit in mind they are going for the breed which finishes first, improves turnover and cuts carbon”. 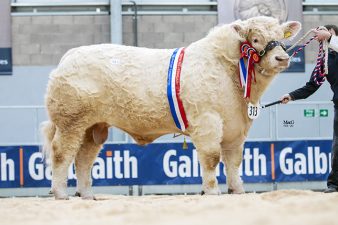 The star of the sale was W K and P Drysdale’s senior and supreme champion from Blairgowrie, Perthshire, who was the first to sell at 25,000gns. The May 2018-born Glenericht Oasis, whose full brother sold for 11,500gns in October 2017, is sired by the 12,000gns Caylers Gladiator and out of Glenericht Gem, a daughter of the 16,000gns Stirling junior champion Clyth Diplomat. He was purchased by Danny Sawrij, Kedzlie Farm Ltd, Blainslie, Lauderdale. 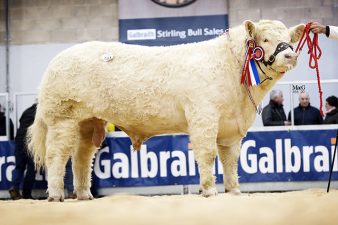 The other lot to secure 25,000gns was the reserve supreme and junior champion Elrick Outlaw, this time knocked down to Boden and Davies Ltd, Mellor, Cheshire. A 17 month-old son of the French-bred Maerdy Gouverneur, his dam Elrick Florida, who is also mother to the 8,500gns Stirling supreme champion Elrick Malt, goes back to the 11,000gns Maerdy Dublin. His breeder and consigner Michael Massie, Ellon, Aberdeenshire, accrued the day’s top herd average of £14,175.00 for his four bulls. 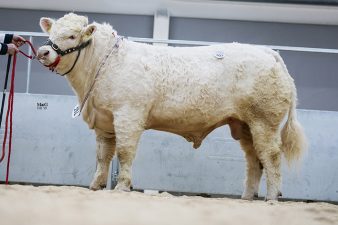 Michael’s next highest priced at 15,000gns was the red ticket winner Elrick Oxygen, also sired by Gouverneur, his dam Elrick Isidore is another Maerdy Dublin daughter. The August 2018-born Oxygen caught the eye of the Maghera breeder Jonathan Crawford and travels home over the water to work in Co Derry.

Mr Massie’s other top priced lot Elrick Oxford was knocked down sold to W Ramsay and Sons, Castle Douglas, Kirkcudbrightshire, for 9,000gns. This 17 month-old lad who is bred out of the 16,000gns Stirling supreme champion Thrunton Fearless daughter Elrick Jessica, is another son of Maerdy Gouverneur. 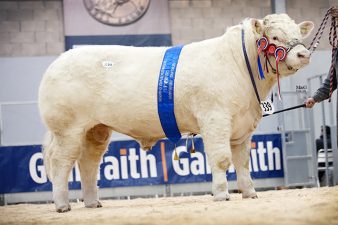 The second bull to sell at a 15,000gns price tag was the pre-sale show’s intermediate champion from Roy and Matthew Milne, Lhanbryde, Morayshire, whose five bulls sold averaged £8,778.00. Elgin Oliver, a June 2018-born son of the 11,000gns Woodpark Elgin and the 12,000gns Caylers Gladiator-sired Elgin Ianthe, was purchased by Jenny and John Rix, Nayland, Essex. 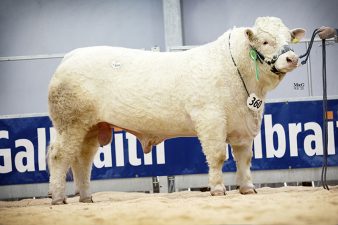 13,000gns was the highest price paid for an impressive string of 12 bulls sold by the Flintshire Vet Esmor Evans which averaged £6562.50. The June 2018-born Maerdy Osgood, who caught the eye of joint purchasers Major David Walter, Balthayock, Perthshire and C Smeaton, Kirkbuddoo, Angus, when he was placed third in his class the previous day, is out of Maerdy Honney, a daughter of the French-born Froufrours, while his sire is the 10,000gns Stirling reserve senior male champion Blelack Fabulous.

Esmor’s other top lot was the blue ticket winner Maerdy Obrian. The first son sold by the 18,000gns Stirling reserve supreme champion Goldies Linford, his dam Maerdy Dendrite goes back to the French bred Maerdy Alcazar. 9,500gns was the final bid by W J Millar, Tealing, By Dundee, for this 18 month-old bull. 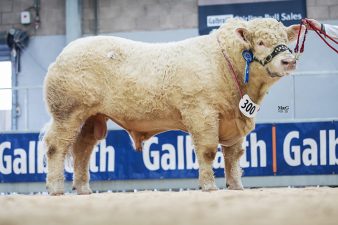 The auctioneers gavel came down 10 times in total at 10,000gns and the first to achieve it was the Northumberland bred Burradon Olaf from former Society chairman Chris Curry. Having placed second in his class at the pre-sale show, the 21 month-old Olaf is sired by the Irish bred Clenagh Lyle who has bred over 60 progeny into the herd since his purchase in 2016. Burradon Jemma is his dam and she goes back to the 10,000gns Puntabrava Federico, while grandam Emma is a full sister to the 26,000gns Burradon Garibaldi. J Morton and Son, Melrose, Roxburghshire, were his purchasers. 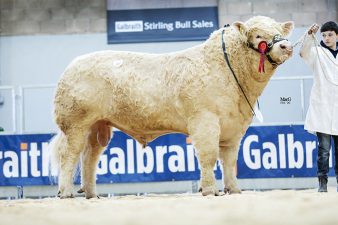 Matching the 10,000gns price tag was an entry from the aforementioned Danny Sawrij. Swalesmoor Oscar, a May 2018-born son of the 30,000gns Oakchurch Igor, was purchased by John W Millar, Port of Menteith, Stirlingshire. His dam Swalesmoor Laura is in turn sired by the 22,000gns Yorkshire show male champion Balmyle Headline. 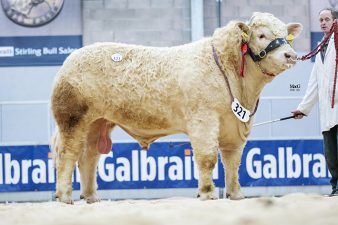 A and R Paton, Avonbridge, Falkirk, were the next to purchase a 10,000gns lot. The class winner Woodpark Oaktree is out of the Irish bred Deeside Gulliver daughter Woodpark Lavender and this June 2018-born bull is sired by the French born Doonally Souverain. He was bred and exhibited by Will Short, Beragh, Co Tyrone. 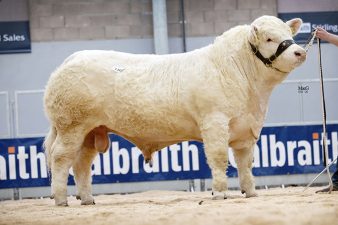 The next two 10,000gns lots both come from the vendors, William and Moira Milne, Strathdon, Aberdeenshire. The first Glenernan Ohboy, who is a 20 month-old son of the 17,000gns Elgin Jagger and Glenernan Finesse, a daughter of Mistral Ben, was knocked down to John Jeffrey, Kelso, Roxburghshire. 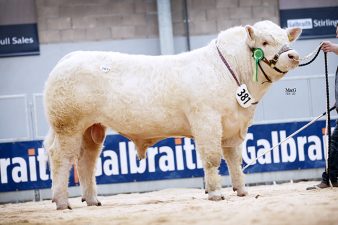 The Milne’s other 10,000gns offering was the yellow ticket winner Glenernan Original, a July 2018-born lad by the 17,000gns Elgin Jagger and out of Glenernan Ivory, who goes back to the Stars of the future junior male champion Dunesk General. J Gordon and Co, Alford, Aberdeenshire, were the winning bidders. 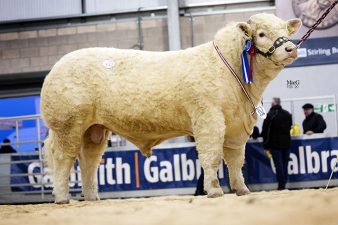 The reserve intermediate champion was the next to sell at 10,000gns. Sired by the Perth show junior champion Balthayock Impression, the 19 month-old Balthayock Overdrive, who was purchased by K and J Mallarkey, Ythan Bank, Aberdeenshire, is out of the Highland reserve female champion winner Balthayock Lisa, whose father is the 26,000gns Balbithan Vespasian, while grandam Gem bred the 46,000gns Minstrel. Breeders and exhibitors Major David and Nick Walter, Balthayock, Perthshire, matched the day’s top number of bulls sold at 12 – averaging £6,763.75. 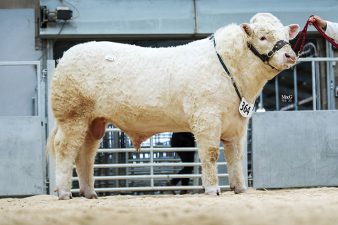 The July 2018-born Thrunton Orkney from J H C Campbell and Sons, Alnwick, Northumberland, who sold a total of four to average £7743.75, was the next to attain the 10,000gns price. Sired by the 28,000gns Maerdy Jerusalem, his mother Thrunton Lilac goes back to Thrunton Gladiator, and he was purchased by Jan Boomaars, Woldingham, Surrey. 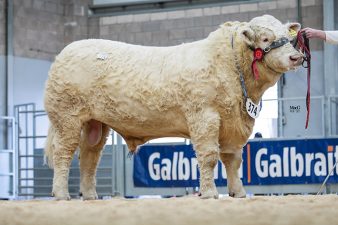 Also hitting the 10,000gns price tag when he was snapped up by G T Wordie, Huntly, Aberdeenshire, was A and A Wright’s class winning 19 month-old, Lagavaich Orlando from Ballindalloch, Banffshire. Elrick Jazzman is the sire here and his dam Hindstones Gypsy is by the Carlisle supreme champion Trefaldwyn Valiant. 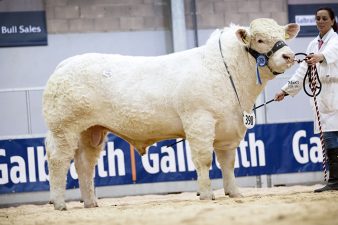 Tweeddale Orbit, a 17 month-old bull who was tapped out reserve junior champion for breeders Jonathan Watson and Co, Berwick Upon Tweed, Northumberland, was next to sell at 10,000gns. He is another to boast an impressive pedigree being sired by the 28,000gns Maerdy Jerusalem and his dam Tillside Ingrid, full sister to the 9,000gns Goldies Iceman goes back to the 30,000gns Dingle Hofmeister. He goes back to Northumberland to work for F T Walton, in Morpeth. 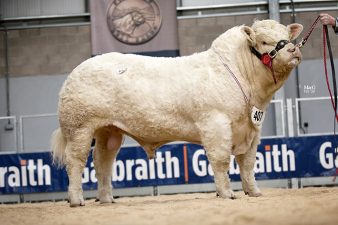 The next vendors in the money were R and N Barclay, Insch, Aberdeenshire, who sold a total of six bulls which averaged £8,802.50. Their 10,000gns class winner Harestone Offtheclock who was purchased by H Crawford, Ballymena, Co Antrim, is a September 2018-born son of the French born Highland show champion Harestone Jaquard and Harestone Iona, a 16,000gns Stirling supreme champion Thrunton Fearless daughter. 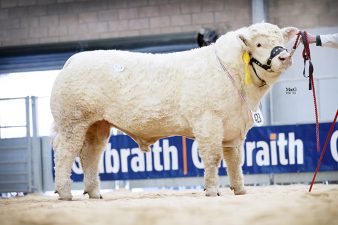 The Barclays next highest priced was the yellow ticket winner Harestone Oberhausen. Out of Harestone Jutty, another Thrunton Fearless daughter and sired by the homebred Harestone Hercules, the 16 month-old Oberhausen commanded an 9,500gns bid from J M Nisbet, Sorn, Ayr. 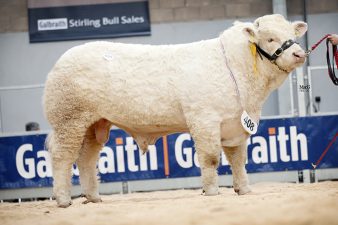 Also from the same home was the September 2018-born Harestone Osasco, who was purchased for 9,000gns by Andrew Young, Girvan, Ayrshire. Another son of Harestone Jaquard, his dam is the Thrunton Fearless-sired Harestone Lovejoy. 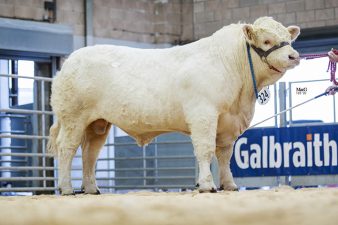 Three more bulls then achieved 9,000gns apiece with the first coming from Colin and Fiona Wight, Biggar, Lanarkshire, who sold a total of three to average £6,650.00. Carwood Oswald who stood second in his class the previous day is a son of the 14,000gns Ugie Goldcup and out of the Royal Highland show reserve junior male champion Elgin Emperor daughter Carwood Iris. The man behind the money on this 20 month-old bull was J W Hogg, Gifford, East Lothian. 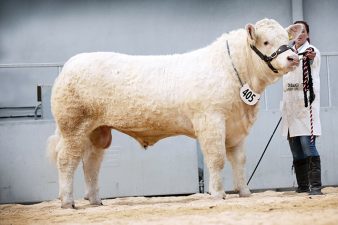 The same buyer went on to purchase Tweeddale Ontop also spending 9,000gns to secure him from the aforementioned Jonathan Watson and Co, Berwick Upon Tweed, Northumberland, who sold a total of six to average £5,915.00. The August 2018-born Ontop is out of Lakenheath Ellen, who has bred sons to 9,000gns and is sired by the Suffolk show champion Tattenhall Impeccable. His sire is Blelack Blackberet who has not only bred over 100 progeny into the Tweeddale herd but has also proved to be a popular choice for AI. 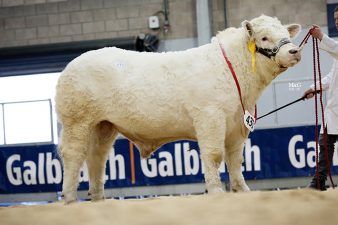 The final 9,000gns bid went to Bill Bruce, Meigle, Perthshire, for his 14 months-old bull Balmyle Onward. Sired by Ovil Lennon whose first crop of sons were sold at Stirling last October where they were awarded the best group of three and sold to a top of 9,500gns, Onward’s dam is the 22,000gns Balthayock Diplomat daughter Balmyle Harmony. G W Woolhouse and Sons Ltd, Ravensfield, Rotherham, were the purchasers. 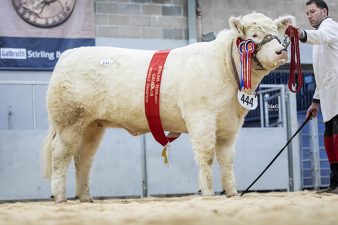 Leading the bids for the females at 5,500gns was the female champion Allanfauld Ozzy from former Society President Archie MacGregor, Kilsyth, Glasgow. Sean Mitchell, Skelton, Cumbria, was the winning bidder of this July 2018-born heifer, by the homebred Allanfauld Lachie who has bred over 40 sons and daughters and out of Allanfauld Gaga, a daughter of the Royal Highland show reserve junior bull Elgin Davinci.

The above-mentioned J H C Campbell and Sons heifer entry Thrunton Oriental was another female top seller. David Dandie, Broxburn, West Lothian, were the purchasers who paid 3,200gns for the reserve female champion and July 2018-born Oriental whose dam is the Thrunton Gladiator-sired Thrunton Isabella and sire is the 28,000gns Maerdy Jerusalem.