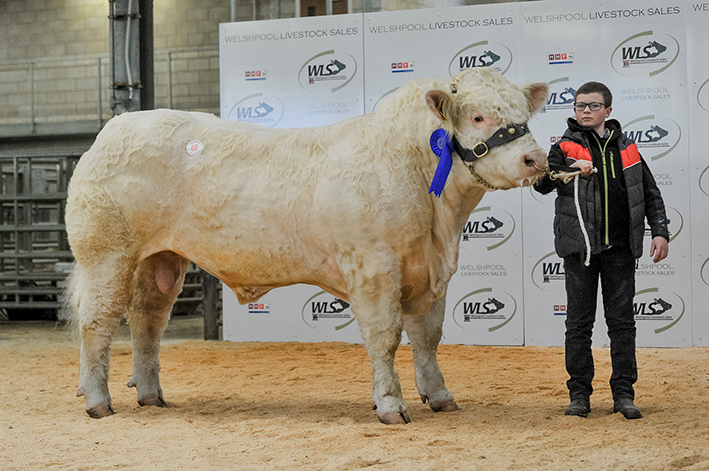 Topping at 6,100gns with an average of £3615.94 for the 32 bulls sold, an increase of five from last year’s tally, the sale at Welshpool on Thursday 7 November also saw the clearance rate rise by an impressive 14%.

It was a great day for David Thornley, Hartshorne, Derbyshire, who not only secured the sales top price, but in addition his bulls produced the top herd average for the day at £5,180 for his three sold, his herd’s top average to date. David said “Welshpool is my main sale and I produce my bulls with the commercial man in mind, aiming for good calving figures with an emphasis on health and longevity. While at the market this week, three of my previous buyers made a point of coming to talk to me to tell me how pleased there with their Dooley bulls. I was delighted to hear this and this is the reason I keep coming back here to Welshpool.”

David’s sale topper at 6,100gns was the 16 month-old and yellow ticket winning Dooley Ocean, whose sire Davally Igolo was twice crowned champion at National shows. His dam is the 10,000gns Balmyle Dingle daughter Balnuith Inspire, and he goes on to work at Pentrefoelas, Gwynedd for new owners A and M Owen. 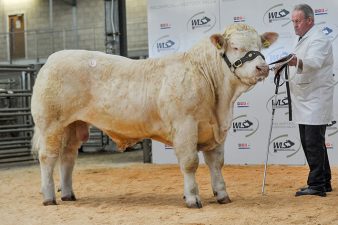 Mr Thornley’s other top priced lot was Dooley Orville, also sired by Davally Igolo but this time out of Blelack Headgirl, another Balmyle Dingle daughter. The July 2018-born Orville was knocked down sold for 5,200gns to VB and H Davies, Llanafanfawr, Powys. 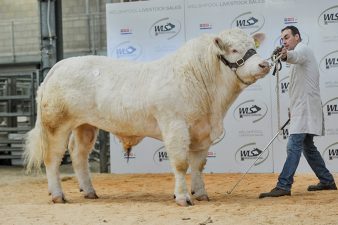 Earlier in the sale a 17 month-old son of the 8,000gns Carlisle supreme champion Gretnahouse Jugular, sold for the second highest price of the day to BA and O Jones, Criccieth, Gwynedd. Montgomery Orly, who is out of the Blelack Digger-sired Montgomery Havard realised a price of 5,600gns for his breeders and exhibitors Roberts and Jones, Llangadfan, Powys, whose Montgomery herd also did well, seeing five bulls going on to new homes for an average price of £4,452. 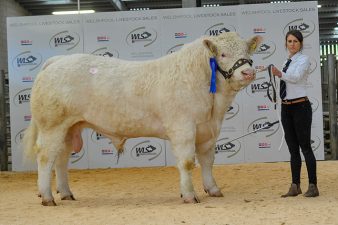 Their next top selling lot which commanded a 5,200gns bid from ET Bound and Co, Llangurig, Powys, was the May 2018-born Montgomery Odessa, who stood second in his class at the morning’s show. Odessa is sired the same way as his aforementioned shed mate and his dam Montgomery Ffydd also goes back to Blelack Digger. 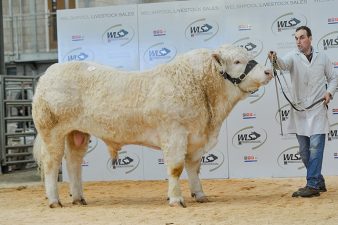 Another in the money for the Montgomery herd was Montgomery Owain. This time sired by the 9,000gns Balmyle Harlequin. This 18 month-old is out of another Blelack Digger daughter Montgomery Little and the man behind the money on this lot was E Edwards, Cerryigdrudion, Denbighshire. 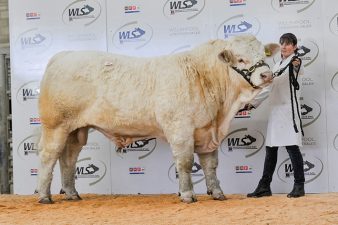 Following on at 4,800gns was Caylers Oreo who was offered for sale the Barker family of Caylers Charolais, Nuthampstead, Hertfordshire. TT Thomas and Son, Three Crosses, Swansea, was the purchaser of this 19 month-old son of the Irish-born Rosanna Jupiter and the Thrunton Dominator-sired Caylers Gytha. 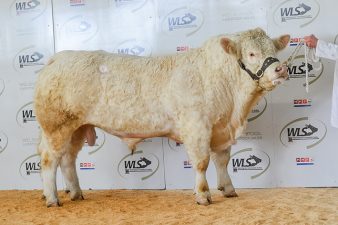 Next in the trade stakes was the March 2018-born Belan Orlando. Belan Jennie, a daughter of the 18,000gns Thrunton Fairfax is the dam here while he is sired by the 7,000gns Tweeddale Marcus. He was bred and exhibited by J S Abel, Cwmbelan, Powys and the final bidders on this 4,800gns lot were D Jones and Son, Corwen, Denbighshire. 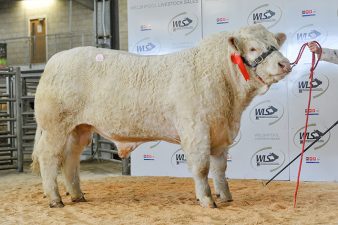 Minutes earlier a class winner from Alwyn and Medwyn Williams went under the hammer at 4,200gns. Castellmawr Outstanding, a 20 month-old by the Irish-bred Goldstar Gentleman and out of Castellmawr Jade, who goes back to the French-bred Riri, was purchased by TH Williams and Son, Welshpool, Powys. 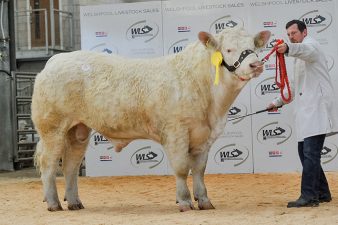 Matching the 4,200gns price tag was Trefaldwyn Oliver, and this blue ticket winner was snapped up by JT and A Davies, Oswestry, Shropshire. The youngest lot of the sale at just 13 months old, the Balthayock Darcy-sired Oliver was offered for sale by local breeder Arwel Owen, Garthbeibio, Powys. His dam is the homebred Trefaldwyn Joy who goes back to the popular AI sire Goldies Eddy. 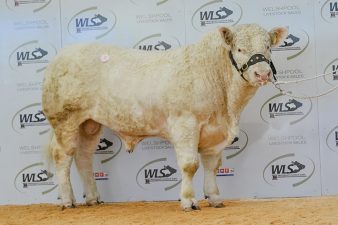 Four bulls then came under the hammer for 4,000gns with the first being offered for sale by Kevin Thomas, Capel Iwan, Carmarthenshire. Moelfre Orion who is bred out of Moelfre Ianna, a daughter of the 16,000gns Royal Welsh reserve male champion Anside Foreman, is sired by the 12,500gns Balmyle Impression and G Davies, Tywyn, Gwynedd, was the purchaser of this 18 month-old lad. 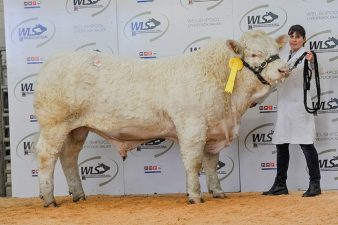 The second to sell at a 4,000gns price tag was the May 2018-born Caylers Osprey, who stood third in his class at the pre-sale show. The 10,000gns Stirling reserve senior male champion Blelack Fabulous is his sire and his dam is Caylers Ella, a daughter of Maerdy Uniroyal. Purchased by J Brown, Minehead, Somerset, this bull was another entry consigned by the aforementioned Caylers Charolais.

The class winning Esgob Oswyn was the third bull knocked down to 4,000gns, when he caught the eye of Mr Evans, Bryncir, Gwynedd. Gareth Jones, Cwmtirmynach, Gwynedd, was the breeder of this 17 month-old, sired by the 12,000gns Caylers Hustler and out of the Blelack Digger daughter Esgob Jade. 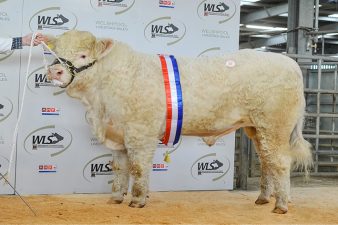 Another to bring 4,000gns when chapped down to Billy Turner, Skelton on Ure, North Yorkshire, was Esmor Evans champion Maerdy Orpheus from Mold, Flintshire. One of the younger lots, this 15 month-old who is sired by the aforementioned Blelack Fabulous is out of Maerdy Martha, a 26,000gns Maerdy Hearthrob daughter.

Four heifers found new homes and the best seller of the day was the two year-old Mortimers Nononsense, who realised a top bid of 3,000gns. She has an impressive pedigree behind her, being sired by the South East Calf show bull calf champion Mortimers Hurricane and her dam Mortimers Genie, a National show champion, is in turn sired by the 16,000gns Perth senior champion Ravensworth Alder. She went home with J Rudkin, Thrussington, Leicestershire, who purchased her from Messrs Mortimers Farm, Eastleigh, Hampshire.

Graiggoch Natalie, an October 2017-born heifer from Gerwyn Jones, Nebo, Conwy, was next top priced at 2,300gns. Purchased by Sandbatch Charolais, Sandbatch, Cheshire, she was tapped out first in her class at the morning’s show and is sired by the 15,000gns Carlisle supreme champion Burradon Talisman, while her dam Edenhurst Rhapsody goes back to the 14,000gns Royal Ulster junior champion Killadeas Jack.

At the finish of the sale there was a dispersal of the Hackleton Charolais herd of Hackleton, Northamptonshire. The herd which was established over 25 years ago with purchases from the Lendor and Gurteen Charolais herds, has bred two National show champions and is sadly dispersing due to the development of the farm buildings and other commitments.