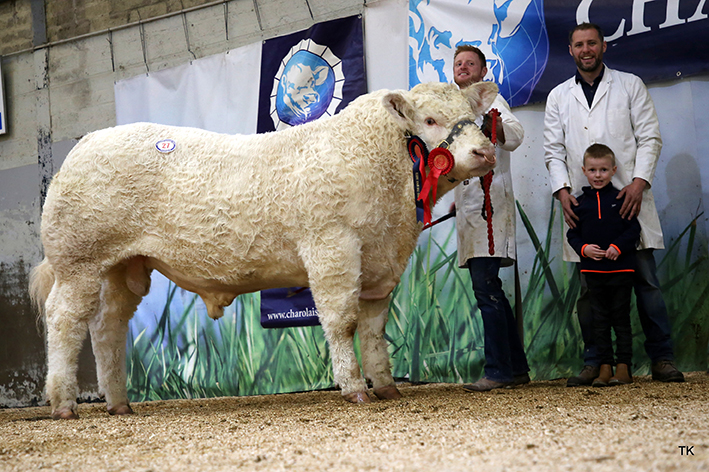 There was a good trade for Charolais at the Northern Ireland club sale held at Dungannon Mart on Friday 1 November, where bidding peaked at 5,800gns and 29 lots sold to an average of £3,277 with a 74% clearance rate, up 7% on last year.

Topping the lots at 5,800gns was the day’s reserve senior champion from Devine Brothers, Artigarvan, Co Tyrone. Brownhill Owenroe, a 16 month-old who was purchased by Frank Reid, Ballinahinch, Co Down, boasts an impressive pedigree being sired by Rumsden Fawkes who counts among his show successes the Balmoral Show supreme championship, the Highland Show male,  reserve supreme, and junior interbreed championships as well as the Royal Welsh junior interbreed championship. While his dam Brownhill Indigo goes back to the Highland show junior champion and 25,000gns Perth supreme champion Goldies Unbeatable. 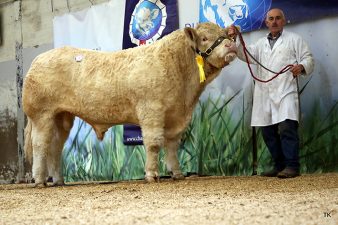 Following on at 5,200gns was Beechdale Obelix, a February 2018-born lad who caught the eye of Sean McGovern, Clogher, Co Tyrone. He is out of Beechdale Lavender, an Alwent Goldbar daughter, by the popular AI sire Davally Illusion and was awarded a yellow ticket at the pre-sale show for breeders and exhibitors Gregory Donnelly, Ardmore, Co Derry.

Minutes later Drumlegagh Oscar, a 17 month-old son of Blelack Digger and Deeleview Helen, who goes back to the French-bred Suzeringie, who stood second in his class at the pre-sale show was sold for 4,200gns. Purchased by J Marshall, Castlederg, Co Tyrone, he was bred and consigned by John, Ivan and Ryan Elliott, Newtownstewart, Co Tyrone. 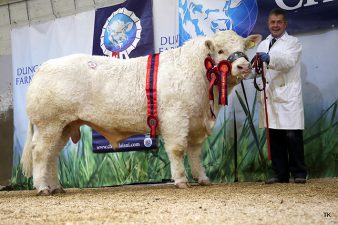 Also in the money was Mervyn McKeown, Crossgar, Co Down, who secured 4,100gns for the June 2018-born Royaldowns Orlando, who had earlier claimed the junior male champion prize, the overall male champion prize and the supreme championship. Orlando who is sired by Rowandale Dancer and goes back to the Allanfauld Velocity-sired Royaldowns Debbie goes on to work in Castlerock, Co Derry for new owner Ivan Tanner. 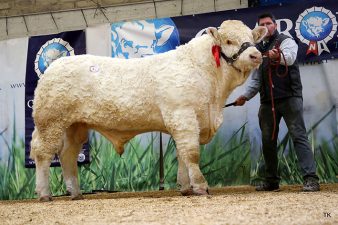 Matching the 4,100gns price tag and also securing a red ticket at the pre-sale show was Patrick Quigley’s 15 month-old bull Rossavalley Oak from Bellanleck, Co Fermanagh. Kevin McManus, Enniskillen, Co Fermanagh, was the man with his hand in the air as the hammer went down on this 18,000gns Thrunton Fairfax son, whose dam Rossavalley Jane is sired by the 15,000gns Carlisle supreme and intermediate champion Burradon Talisman.

Four bulls then achieved 4,000gns apiece, with the first being Mountjoy Oregon, a February 2018-born lad by the Royal Welsh reserve junior champion Montgomery Ianto and his dam Mountjoy Jitterbug goes back to the Carlisle reserve senior champion Gaer Positive. He was shown and bred by Caldwell McAskie, Mountjoy, Co Tyrone and purchased by D McClurkin from Belfast. 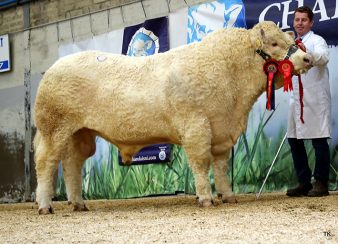 The days senior champion who was also awarded the reserve supreme champion and reserve overall male champion accolades, was the next in the trade stakes at 4,000gns. The 18 month-old Sandelford Odriscoll from George Henderson, Bushmills, Co Antrim, is out of Sandelford Hannah, a daughter of the 14,000gns Goldies Usher and sired by Blelack Immaculate and he was purchased by the pre-sale show judge Edward Hull of Southminster, Essex.

The judge didn’t stop there with his purchases, he also went on to secure a blue ticket winner from Will Short, Beragh, Co Tyrone, for 3,100gns. Woodpark Olympian, a May 2018-born by Deeside Gulliver is bred out of Woodpark Glenda who in turn is sired by the 19,000gns Doune and Dunblane show champion Corrie Alan.

A July 2018-born class winner from Sean McCaughey, Augher, Co Tyrone, was next to secure 4,000gns. Fymore Outstanding who heads out to Co Down to work at Ballynahinch for M Murphy, is out of the 18,000gns Perth intermediate champion Fury Action-sired Fymore Emerald and by Crossmolina Euro.

The yellow ticket winning Cappagh Oscar was just behind, securing 3,200gns for his breeders Mr Robert and Agnus Todd, Corbet, Co Down. A son of the 9,000gns Blelack Goldenboy and out of the 13,000gns Stirling reserve intermediate champion Conval Frank-sired Cappagh Ines, the 19 month-old Oscar was knocked down to Malcom Fleming, Magherafelt, Co Derry.

Gregory Donnelly’s Beechdale herd from Ardmore, Co Derry was behind the next top priced sale. Beechdale Ocean, a June 2018-born lad who was snapped up by Paul Hughes, Benburg, Co Tyrone, for 3,000gns, is sired by Davally Illusion and out of the Clyth Diplomat daughter Beechdale Lupin. 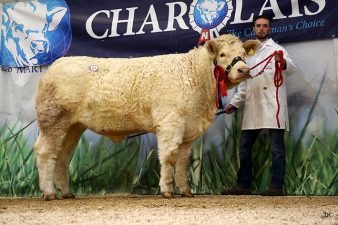 The female section was headed up by the female champion who was bred and exhibited by Edgar Johnston and Sons, Cookstown, Co Tyrone. Bid to 3,600gns by Frank Reid, who had already purchased the top priced bull lot, Gallion Nancy is a two year-old by the 25,000gns Stirling intermediate and reserve supreme champion Inverlochy Ferdie and out of Coolnaslee Hawthorne who goes back to the 9,500gns Clogher show senior male champion Corcreevy Dingle. 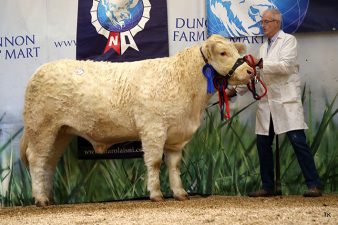 Next in the trade stakes at 3,300gns was the reserve female champion Brogher Nancy, who sold served to the 10,000gns Stirling reserve junior champion Goldies Icon. Trevor Phair, Bellanaleck, Co Fermanagh, was the consigner and Nancy, a November 2017-born daughter of the 8,000gns Blelack Blackberet and the Pirate-sired Brogher Elly, was snapped up by Sydney Hadnett, Armagh, Co Armagh.

Up next and making 2,900gns when she was knocked down to Stephen McGuiness, of Hawthorn Heights, Greysteel, Co Derry, was the May 2018-born class winner Drumlone Olga from Kenneth Veitch, Lisbellaw, Co Fermanagh. Sired by Crossmolina Euro, her dam Dunmore Gina goes back to Cottage Devon.

At the end of the sale there was a small draft of four heifers from Brian McAllister and Son, of Kells, Co Antrim, all of which found new homes to average £2,283.79. The highest priced of the bunch was the 22 month-old 18,000gns Thrunton Fairfax daughter Burnside Nutella. Out of Burnside Eimp, who goes back to the 16,000gns Perth reserve junior champion Balmyle Vagabond, she was purchased for 3,000gns by John Watson, Portadown, Co Armagh.

The McAllister’s other top priced lot, who was purchased for 2,400gns by Patrick Kearney, Maghera, Co Derry, was Burnside Ova, an 18 month-old daughter of the 16,000gns Clyth Diplomat and Sandelford Deva, who goes back to the 14,000gns Goldies Usher.