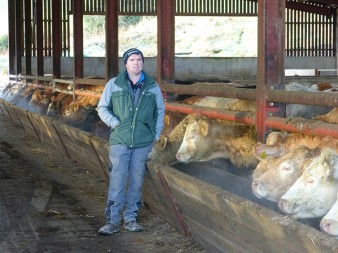 Behind the busy farm supplies operation in Ballynahinch,  McKelvey Bros runs one of the top finishing units in County Down.  Finishing 1000 bullocks and 300 heifers including 1000 head of Charolais last year. The cycle never stops says Thomas McKelvey.

“We graze 400-500, mainly Charolais because they do best at grass.  You can get Charolais finishing at 16-20 months, this is where the breed has the big advantage and passes other continental breeds.  We want weight for age, nothing will beat them”.

The new beef unit was built in 2012, the farm itself has 500 acres.  A total of 260 acres of grass is grazed and McKelvey Bros knows the significant feeding value of grass. The remainder is for cereals and grass silage.

“Buying growing cattle lets us spread the risk.  It lets us utilise the grass better and gives the best use of our intensive finishing”.

McKelvey Bros purchases cattle all year round predominately from  Clogher, Markethill, Saintfield and Hilltown They particularly purchase Charolais in larger batches around the 8-12 months to grow them on grass and have them finished between December and March.

Cattle for grass are purchased in February/ March time, looking for leaner cattle and those which will give the highest feed conversion rate to maximise profit.

“We buy the top cattle at the ringside, within a price range for good commercial cattle. Similar continental cattle can be bought but they do not deliver the same growth and profit as a Charolais”.

“The Charolais has growth, some breeders take them too far, maybe to get a bit more money for them but this leaves the finisher little to gain.  It’s better to sell them in a leaner condition”.

“You have to look at what it costs the breeder to get them heavier, if they are too well fed they don’t do so well.  They lose condition when they go out to grass and they just melt”.

McKelvey Bros tries to keep on top of the market and have a good idea of what happens.  We see gradual changes in the suckler market, cattle being sold at lighter weight – the finisher needs to get their chance to do their bit”.

All cattle at McKelvey’s farm are weighed on arrival and treated for IBR, Blackleg, worms and fluke.  Marker tags are put in all cattle for easier identification and herd management.

The ration remains the same wheat, barley, sugar beet pellets and maize meal mixed in the diet feeder with silage,straw and vegetables.  This mix would be fed at 4.5kg per head up to 7.5kg at finishing time.  Cattle are fed twice a day, morning and a fresh run at lunch time bringing the cattle forward.

With the new reduced weight limits,  McKelveys don’t want the cattle  going over 700kg and incurring a penalty. So at 500kg they are put  on the finishing ration.

Thomas says good minerals help with weight gain.  “It helps  to keep them leaner and in the better grades”.

Two loads of washed vegetables are used every week. The cattle always have fresh feed in front of them and it maximises their intake and weight gain.

“The cattle have to grow  to a certain level and they need the frame on them to finish.  They cost a bit more to buy but you get them to a better end price more quickly”. McKelveys aim to have in-spec cattle to achieve mainly top grades.

McKelvey Bros cattle are kept mainly on slatted floors fitted with rubber slat mats, with some kept on straw bedding. There are pens of 40 in the new building and pens of 25 in the original sheds.  Finished cattle are drawn from the December to March period with 50 going for slaughter each week.

The new purpose built shed would be wanted by any beef farmer, holding over 400 head with open ends and side ventilation. Cattle are very comfortable here, hence maximising growth rates. 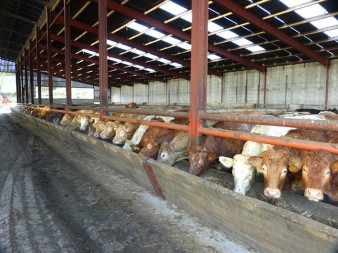 “The weight limit is capped at 420 kg for bullocks, with severe penalties for cattle over this limit that is why we try to keep them within the specification”.

“Charolais bullocks averaged about 385 kg for the year with heifers coming in at 345 kg average, we have very few which are overweight”.

The business operation concentrates on bullocks as they leave a better return and finish heavier.  Heifers finish quicker but the better weight gain is in the bullocks.

Most of McKelvey Bros cattle go to ABP Lurgan a mere 25 miles away again ensuring cattle remain calm and stress free as possible.

There is an air of calm at McKelveys, cattle are quiet and contented. It is a very efficient operation where the cattle can be fed in two hours, leaving plenty of time for other jobs to be done.

Thomas points out that “you can get a premium with native breeds (Aberdeen Angus) but, you can get the same premium with good continental grades. In essence the Charolais gives the weight we want with the conformation that we want in the shortest time.”