Charolais met a solid commercial trade peaking at 7,500gns and smashing centre pedigree cattle records with an average £4,013 for 63 lots sold at the breed society’s autumn fixture at Welshpool on Thursday 8 November.

“A quality show of bulls met a good level trade fuelled by the continued demand for Charolais cattle, a reflection of Charolais sired store cattle which have been attracting premium prices throughout the UK at the autumn suckled calf and store sales,” commented the society’s David Benson. 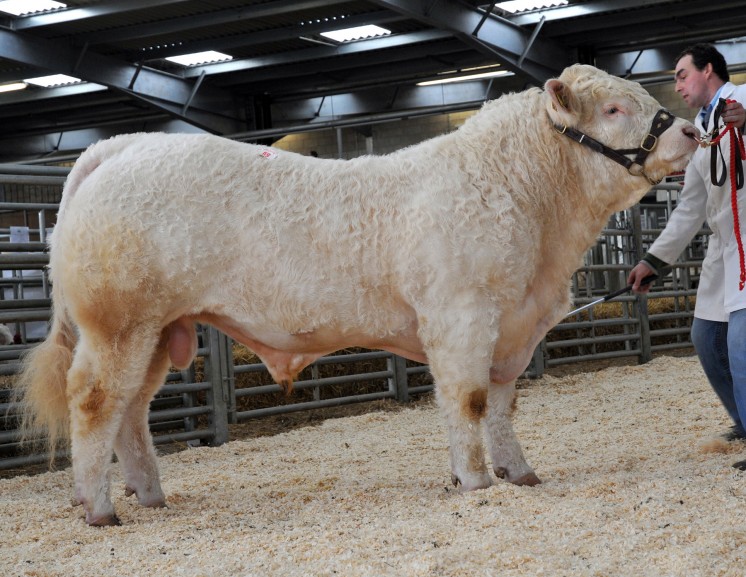 Sale leader at 7,500gns was Montgomery Gwylfa TI +79, SRI +70, an 18 month old within the breed’s top 1%, sired by Blelack Digger and out of a homebred dam going back to Tullygarley Attaboy. Bred and exhibited by Gareth Roberts, Llangadfan, Welshpool he was knocked down sold to James and Alec Cowan, Synod Inn, Llandysul to run with their 120 cow suckler herd. “We selected Gwylfa for his figures, in particular eye muscle, growth and most importantly calving ease, ideal for leaving calves to go on to our bull finishing system which is focused on maximising growth efficiently in the shortest possible time,” Alec explained. For Gareth Roberts it was his highest price ever achieved in Welshpool for a bull bred from his 50 cow herd which is selectively targeting to be within the breed’s top10%.

Later in the day, Mr Roberts was in the money again when he sold for 6,500gns Montgomery General TI +57, SRI +49, another 18 month old Digger son and out of a homebred dam by Baggrave Loggo. The buyer was Alan Brookes, Gipsy Hall Farms, Wilmcote, Stratford upon Avon.

The day’s second highest call at 7,200gns was made for the 20 month old Turney bred Olivers Gibraltar from Brian Jones, Heol Senni, Brecon to TJ Davies, Llanfynydd, Carmarthen. Sired by the 28,000gns Farleycopse Turbo, he was out of a Hamilton cow going back to Mortimers Robroy.

Next at 7,000gns was Deunawd Gethin TI +33, SRI +30, a 17 month old Allanfauld Chieftain son and out of a Penfold dam by Cader Regal. Bred and exhibited by Wil Owen, Criccieth, he was purchased by MLL Howatson, Nantglyn, Denbigh. Two more 17 month old Chieftain sons from Mr Owen each secured a 5,000gns bid. First to go was Deunawd Greg TI +35, SRI +37 to RL Davies, Cwmtirmynach, Bala, while minutes later Deunawd Ger TI +45, SRI +43 was knocked down sold for 5,000gns to TJ Stephens, Cilfrew, Neath.

Llangrove General TI +54, SRI +41 was secured for 6,300gns by BA Williams, Treborth, Bangor. A 19 month old Sarkley Dakota son and out of a homebred dam by Killadeas Jack, he was bred and exhibited by LE and SA Phillips, Llangarron, Ross on Wye.

Four entries shared a 6,000gns price tag. First through the ring was Midas Geronimo TI +45, SRI +45 from father and son team, Roger and Drew Coppinger, Edstaston, Wem to EM Gittins, Menai Bridge, Anglesey. A Dingle Hofmeister son, he was out of a homebred dam by Moyness Maharajah, from their 20 cow herd.

The next 6,000gns bid was made by SI Jones, Llandrillo, Corwen for Caylers Goliath TI +41, SRI +40, a Clonoulty Andraemon son he was out of a homebred dam going back to Kelton Tribune from David and Louise Barker’s 30 cow herd based at Nuthampstead, Royston. Earlier on Goliath secured the third Welshpool championship for the Barkers after judge, Ian Bell identified him for his ‘scale and power’. “He is a modern Charolais combining great growth and fleshing, with a good back end and style.” However he added there was very little between Goliath and reserve champion, Moelfre Gerald TI +31, SRI +23, a 21 month old by the 8,500gns Newhouse Chicago from Kevin Thomas, Llanstephan selling for 4,800gns to RA Elias, Garn Dolbenmaen, Gwynedd.

Mr Thomas secured the third 6,000gns bid for Moelfre Galileo TI +41, SRI +34, a 15 month old Chicago son and out of a homebred dam by Allanfauld Norseman. The buyer was AC Hughes, Pwllheli. A third Chicago son, Moelfre Grandprix TI +33, SRI +23 from Kevin Thomas commanded a 5,900gns bid. A 17 month old out of a homebred dam by Blelack Rommel, this first class prize winner was knocked down sold to RG Powell, New Radnor, Prestigne.

The final 6,000gns call was made by BA Jones, Criccieth for Castellmawr Gwynedd, a 17 month old by the 55,000gns Sportsmans Columbo and out of a homebred dam from Alwyn Williams, Pistyll, Pwllheli.

Two more entries shared a 5,000gns price. The 16 month old Sarkley Glenfiddich, by Plexus and out of a homebred dam from the Pennie family, Glyn, Chris and Nigel, of Llandyssil, Montgomery was knocked down sold to James Alexander, Randlestown, County Antrim. The next lot in the ring, Oakchurch Gunner TI +72 SRI +62 was secured for 5,000gns by B and M James, Dolfor, Newtown. Bred and exhibited by Roger Price, Staunton-on-Wye, Hereford, Gunner was by Blelack Digger and out of a homebred dam by the 25,000gns Thrunton Socrates.