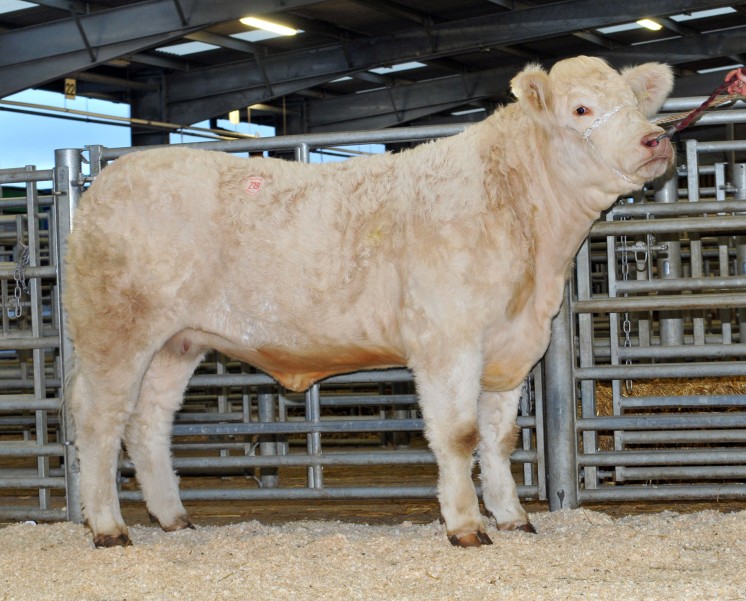 Charolais females were in demand peaking at 11,000gns when Arwel Owen reduced his Trefaldwyn herd in Welshpool on Thursday 8 November.

Sale topper at 11,000gns was Trefaldwyn Fancygirl TI +45, SRI +42, a two year old Dingle Hofmeister daughter, out of a homebred dam by Major and sold in calf to Blelack Digger. Fancygirl was no stranger to the ring having secured the Royal Welsh female and reserve overall breed championship titles earlier this year. She was knocked down sold for flushing to Richard Clegg, Seathwaite, Cumbria.

A total of 5,500gns was paid for another cow and calf pair. The four year old Trefaldwyn Destiny TI +29, SRI +26 by Trefaldwyn Usk, out of a homebred dam going back to Edenhurst Shogun and sold in calf to Goldies Eddy made 3,500gns to RP Ryder, Welshpool, while Trefaldwyn Hawaii TI +61, SRI +54, her nine month old heifer by Digger made 2,000gns and travelled over the water with S Killen, Newry, County Down.

Heifers by the 28,000gns Goldies Champion were in demand. Selling for 4,800gns to J Evans, Ardudwy was Trefaldwyn Goldengirl TI +25, SRI +29, a 22 month old out of a homebred dam going back to Mowbraypark Orlando. A bid of 4,500gns secured the two year old Trefaldwyn Ffion TI +25, SRI +23, another Champion daughter, for A and O Redhead, Berwick on Tweed while the two year old Trefaldwyn Fanfare TI +22 SRI +22 by Champion commanded a price tag of 4,400gns from DH Jones, Bow Street, Ceredigion.