Charolais met a ready demand both from home and from Scottish buyers selling to 5,800gns at the Northern Ireland Charolais Club’s official November show and sale at Dungannon on Friday 2 November. 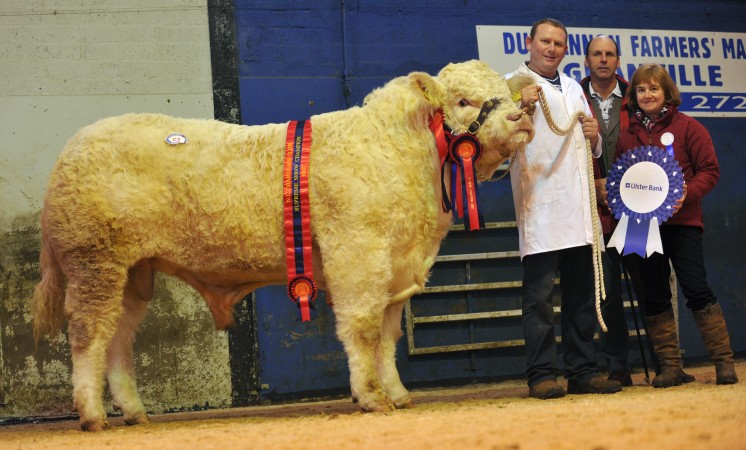 Heading the trade at 5,800gns was the male and supreme champion Fymore Glory TI +37, SRI +33. This 14 month old from S McCaughey, Augher, County Tyrone, was by the 18,000gns Fury Action and out of a homebred dam. He was knocked down sold to V McErlain, Armoy, County Antrim.

The second highest bid of the day was made by Dumfriesshire-based M Barr, Crocketsford at 5,400gns for the 16 month old Derryharney Gentleman TI +29, SRI +23 from H C Stubbs and A A Burleigh, Lisnaskea, County Fermanagh. Gentleman was by the 10,000gns Perth champion Thrunton Bonjovi and out of a homebred cow.

Next came class winner Ramrad Graham at 5,200gns, a 17 month old by the 7,500gns Balmaud Vincent and out of a homebred dam. He was bred by R D A Morrow, Coleraine, County Londonderry and went home with A Butler, Ballycastle, County Antrim. The same buyer also bid 3,400gns for the senior male, reserve male and reserve supreme champion Ballyreagh Goldstar TI +23, SRI +21, an 18 month old from S Somerville, Ballygawley, County Tyrone. This one was by the 55,000gns Thrunton Voldemort and out of a homebred dam.

Sold for 4,600gns was Ballyoak Gucci TI +44, SRI +32, a Doonally New son and out of Killadeas Bovril. This 16 month old from S and A McKenna, Clogher, County Tyrone was secured by D Kane, Ballymena, County Antrim.

A call of 3,600gns was made for Drumilly Gino TI +17, SRI +15, a 17 month old by Killadeas Jack and out of Coolnaslee Regina. Sold to B Halliday, Rathfriland, County Down, he was bred by J R Paynter, Armagh, County Armagh.

Mullaghbane Greg TI +26, SRI +22, was knocked down sold at 3,400gns to J Daly, Pomeroy, County Tyrone. This 17 month old from W E F Elliott, Florencecourt, County Fermanagh, was by Fury Action and out of a homebred cow.

Leading the female trade at 4,200gns was the reserve female champion Dartonhall Faith TI +28, SRI +29. Bred by J Erskine, Killylea, County Armagh, this two year old was by the 19,000gns Corrie Alan and out of a homebred cow was purchased by S Mohan, Emyvale, County Monaghan.

Next at 3,600gns was Brogher Fortune TI +15, SRI +16, from T Phair, Enniskillen, County Fermanagh. Fortune was a 22 month old by the 55,000gns Sportsmans Columbo, out of Lenaghran Rachael, and she was knocked down sold to J Wright, Ballymena, County Antrim.

Two heifers made 2,800gns. First up was Drumacritten Gigi TI +42, SRI +39, from G Nelson, Rosslea, County Fermanagh. Gigi was a 19 month old by Thrunton Bonjovi and out of a homebred dam, and sold to F Reid, Ballinahinch, County Down for 2,800gns. Also sold at 2,800gns was Lisnadill Georgia TI +26, SRI +25, a 15 month old by Doonally Olmeto and out of Mullagh Polly. She was bred by G King, Lisnadill, County Armagh, and was secured by N Cochrane, Craigavon, County Armagh.

The leading 2,600gns bid for the Rowendale herd dispersal from D McKay, Ballymena, County Antrim was made by W Short, Omagh, County Tyrone, for Rowandale Tiree TI +33, SRI +30, a 10 year old cow by Carrowcowan Platonic and out of Killadeas Noelle, with her nine month old bull calf Rowandale Hawkeye TI +33, SRI +36, by Corrie Alan, at foot.