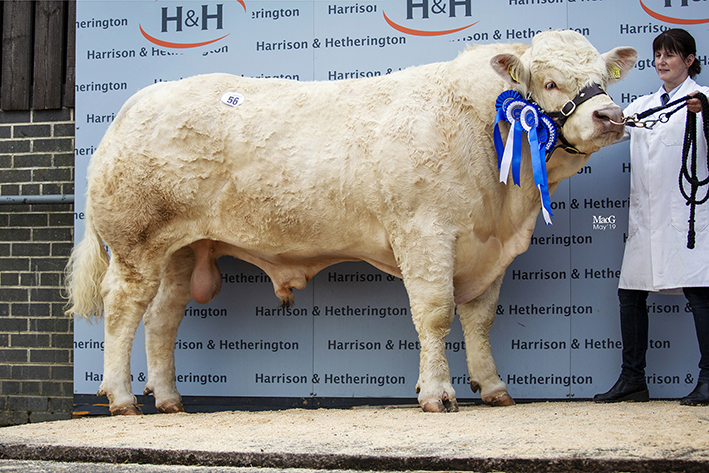 Top priced at 12,000gns was the reserve supreme, reserve male and reserve intermediate champion Caylers Napoleon from the Barker family at Caylers Charolais, Nuthamptead, Hertfordshire, who went on to sell a total of four bulls to average £6,892.50. The 17 month-old Napoleon who was knocked down at 12,000gns in a two way share between John & Raymond Irvine, Ballindalloch, Aberdeenshire and Jim Muirhead, Arbroath, Angus, is sired by the Irish-born Rosanna Jupiter and out of Caylers Fuchsia, a Caylers Bombadier daughter.

Next from the same vendor came the blue ticket winner Caylers Oscar, who is also sired by Rosanna Jupiter. One of the sales younger lots, the January 2018-born Oscar, who is bred out of the Thrunton Dominator-sired Caylers Glamour, caught the eye of Messrs Edmondson, Kirkby-in-Furness, Cumbria, who purchased him for 6,000gns.

Also from the Caylers yard and selling at 5,600gns, was the 17 month-old Caylers Nougat. This time purchased by J Griffiths, Llandrindod Wells, Powys, he is out of the Royal Highland show reserve junior male champion Elgin Davinci daughter, Caylers Inspiration and sired by First, whose first two sons sold last month at Welshpool averaging £6,300. 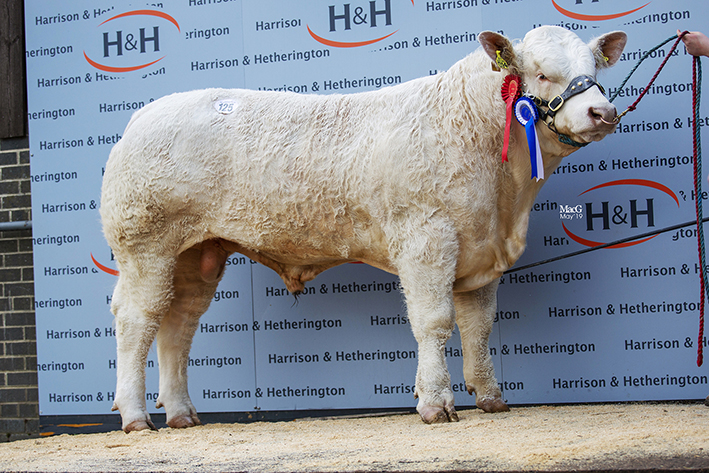 Next in the trade stakes at 9,000gns was the class winner Goldies Network. The 15,000gns Gretnahouse Heman is the sire of this December 2017-born lad, while his dam Goldies Jewel goes back to Goldies Gladiator. Local breeder William Cleasby, Temple Sowerby, Cumbia, was the buyer and he was offered for sale by Hamish Goldie, Ruthwell, Dumfries-shire, who sold a total of three to average £6,930. 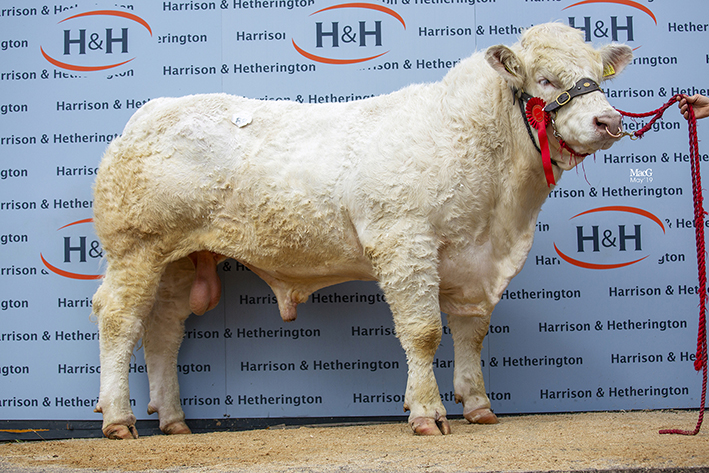 Mr Goldie’s other top lot selling for 8,000gns, was the supreme, male and intermediate champion Goldies Noted. Judge Sean McGovern of the Ratoary Charolais herd, Co Tyrone, placed him top commenting “the champion found me, I liked his moves, a long clean bull with nice quarters and top line, with a great head, locomotion and balance, the type of bull I would like to see in my own yard.” Another Gretnahouse Heman son, this time bred out of Goldies Jinny, a 34,000gns Perth supreme champion Goldies Uppermost daughter, the 17 month-old Noted goes on to work in Castle Douglas, Kirkcudbrightshire, for his new owners Gelston Castle Farms. 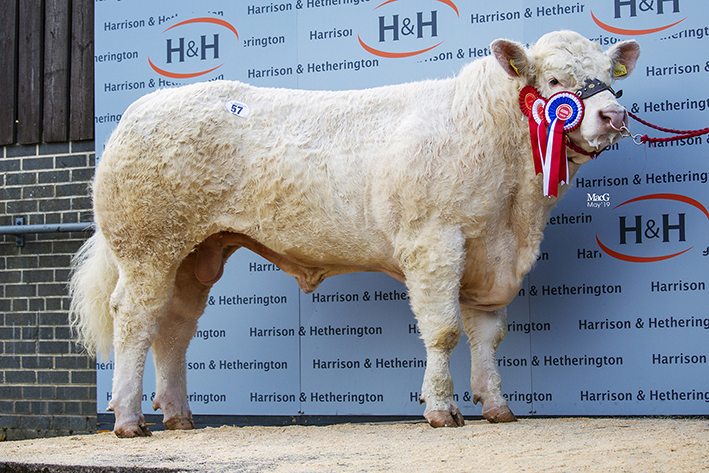 Another lot knocked down at 8,000gns, was Gretnahouse Ninja, who had placed third in his class at the previous day’s show. The December 2017-born Ninja is sired by Westcarse Jimmy, whose first four sons sold averaged £8,250 at Stirling in February, and out of Gretnahouse Fayesse, who has previously bred bulls to 7,500gns, and is in turn sired by the 25,000gns Perth senior champion Thrunton Camelot. He was purchased by A Smellie, Peebles, Roxburghshire and consigned by Alasdair Houston, Gretna Green, Dumfries-shire, who achieved the highest herd average of the day, 7,008.75 for his four bulls. 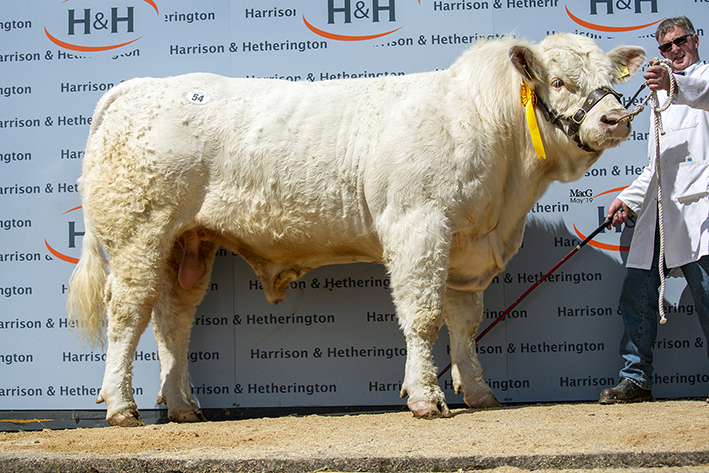 Mr Houston’s next highest priced, selling at 7,200gns to William Forbes, Ballindalloch, Banffshire, was the class winner Gretnahouse Nelson. Westcarse Jimmy is also the sire of this 17 month-old whose dam is the 17,000gns Balthayock Gladiator daughter Gretnahouse Jaywatch. 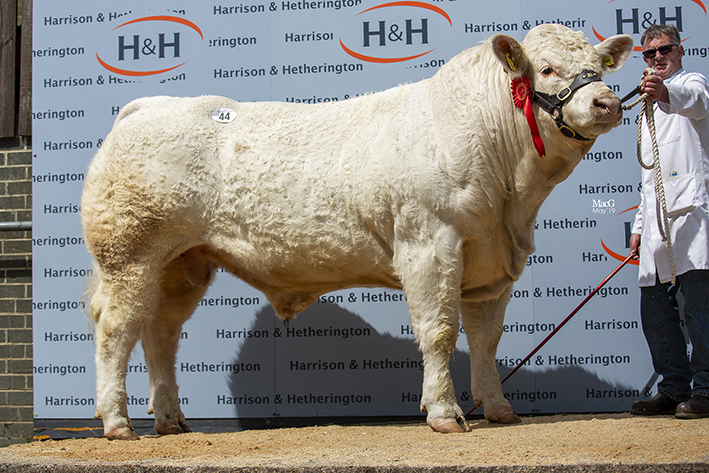 Gretnahouse Neon, a blue ticket winner, was the other of Alasdair Houston’s top selling lots. 6,500gns was the price paid for Neon, an October 2017-born son of Westcarse Jimmy and the 12,000gns Carlisle reserve senior champion Wesley Equinox daughter Gretnahouse Jusilla, who was purchased by Messrs Strain, Ballantrae, Ayrshire.

Whitecliffe Nico, who was tapped out second in his class, was the next highest priced at 7,800gns. Bred and exhibited by Mike and Jane Hayhurst, Kirbymisperton, North Yorkshire, this 20 month old 30,000gns Dingle Hofmeister son, was snapped up by Rachel Dawson, Newton Burgoland, Leicestershire. His dam Whitecliffe Heather is a Blelack Digger daughter. 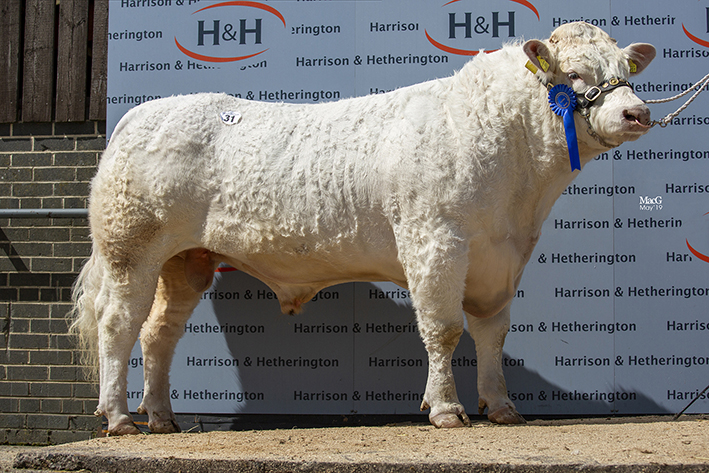 Not far behind at 7,500gns was the March 2017-born Ricnick Nelson, a top 1% calving ease bull, who placed second in his class at the presale show. He is no stranger to the show-ring, having secured the Dumfries show male championship last year. The 18,000gns Thrunton Fairfax is the sire here and he is out of Ricnick Jump, a Logan Geordie daughter. Offered for sale by Richard McCornick, Lochfoot, Dumfries-shire, he was purchased by AH Fisher, Portpatrick, Wigtownshire. 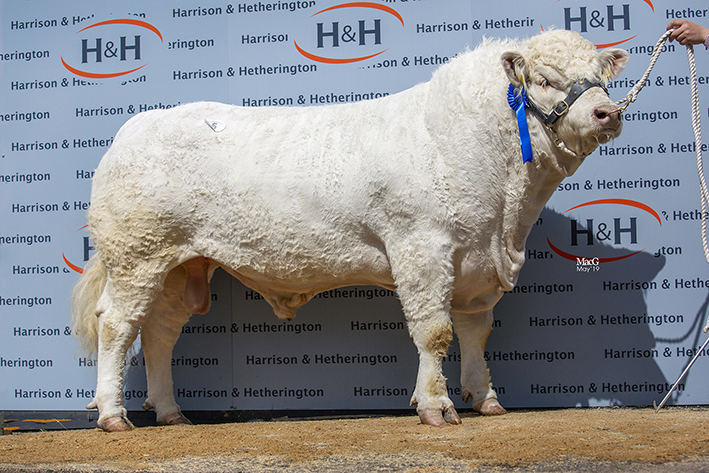 The next highest priced lot was knocked down sold to Messrs Coghill, Birsay, Orkney, for 7,200gns. Seaville Nero, a blue ticket winner and 20 month-old son of the National show reserve male champion Sportsmans Linesman, was consigned by Robert and Kathleen Jackson, Blencogo, Cumbria. His dam Seaville Julie goes back to the popular and easy calving AI sire Blelack Digger. 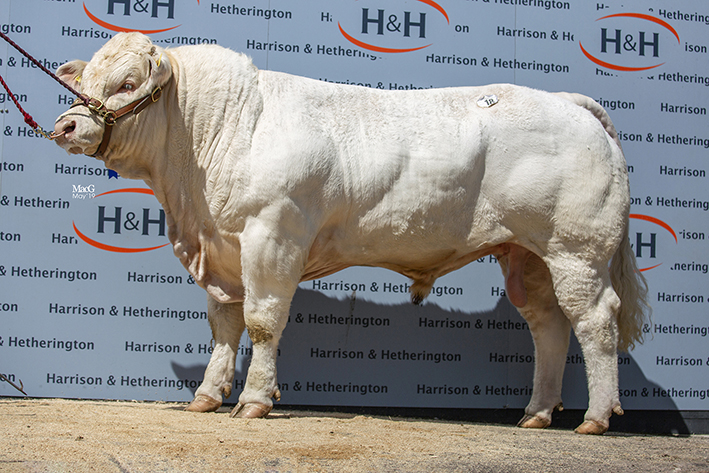 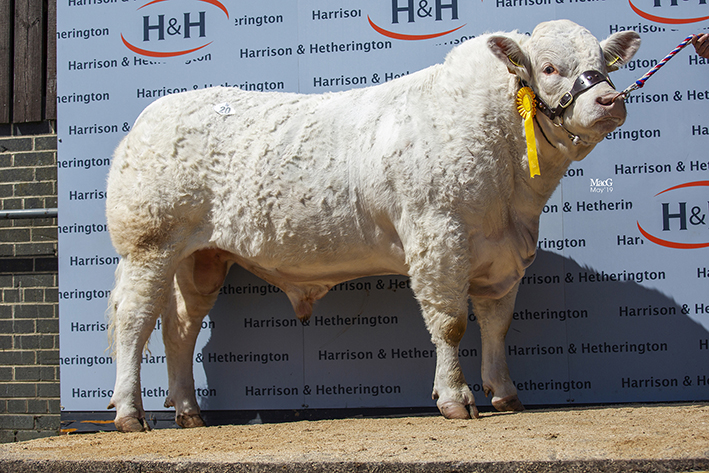 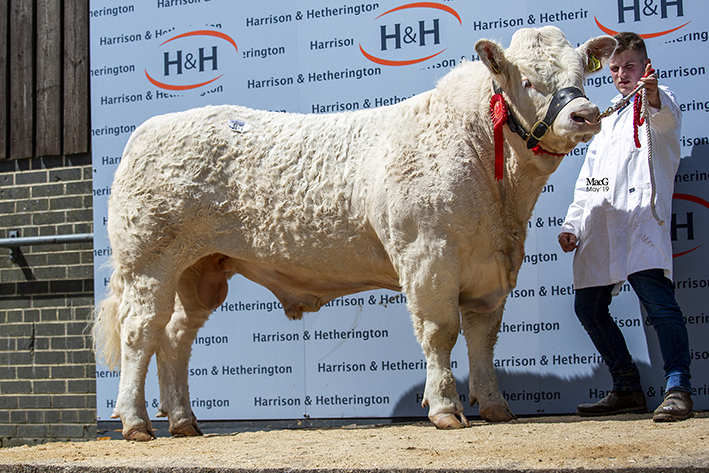 Commanding a 6,500gns bid from an undisclosed purchaser was the 9,000gns Carlisle class winner Nuthampstead Judas son, Westcarse Napoleon, who stood second in his class at the pre-sale show. John Christie, from Stirling, Stirlingshire, was the exhibitor of the December 2017-born Napoleon, who is bred out of Westcarse Gill, a Kersknowe Clansman daughter.

The other 5,500gns lot was Ellerton Oldstone who had been tapped out second in his class for breeder and exhibitor Andrew Brown, Foggathorpe, Yorkshire, and sold to Messrs Shennan and Sons, Girvan, Aryshire. The 19,000gns Perth reserve junior champion Corrie Alan is the sire of the March 2018-born Oldstone and his dam Ellerton Honeysuckle goes back to the £15,000 Lowerffrydd Benhurr.

There was plenty of trade for Charolais females, with heifers selling to 4,800gns twice, both of which were consigned by the aforementioned Hamish Goldie. Goldies Nancy, who had placed second in her class the previous day was the first, a 25 month-old daughter of the 14,000gns Goldies Joss and the Goldies Formidable-sired Goldies Juliette, she sold served to Messrs Strain, Ballantree, Ayrshire. 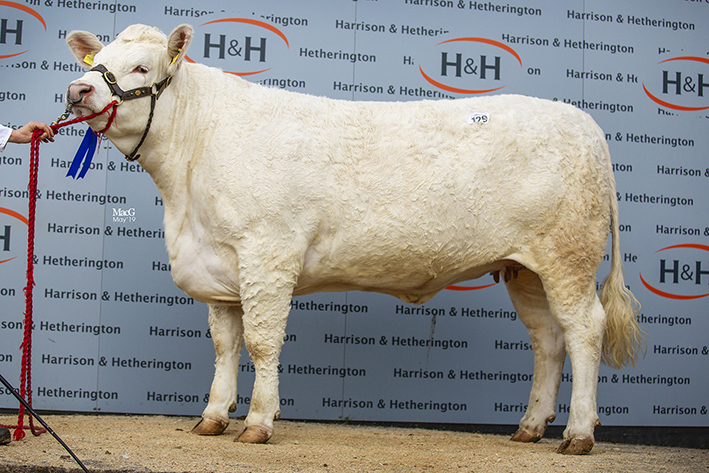 The other of Mr Goldies lots to be knocked down at 4,800gns was the July 2017-born and Gretnahouse Heman sired, class winner, Goldies Nice. Out of Goldies Incense another Goldies Formidable daughter, she was purchased by Whitemills Ltd, Marden, Herefordshire, which is a new venture set up by Botswanan resident Patricia Johnson-Hill. Her son in law and stockman, UK born Clive Marshall, moved over to Botswana in 1985 to take over the running of the Charolais herd there after working for the De Crespigny herd with Gordon Brookes. Clive, who will be establishing Patricia’s Charolais herd here in the UK, is travelling over later this month with the intention of selecting more base females for the herd. He is looking for “structurally correct females with very good figures”. 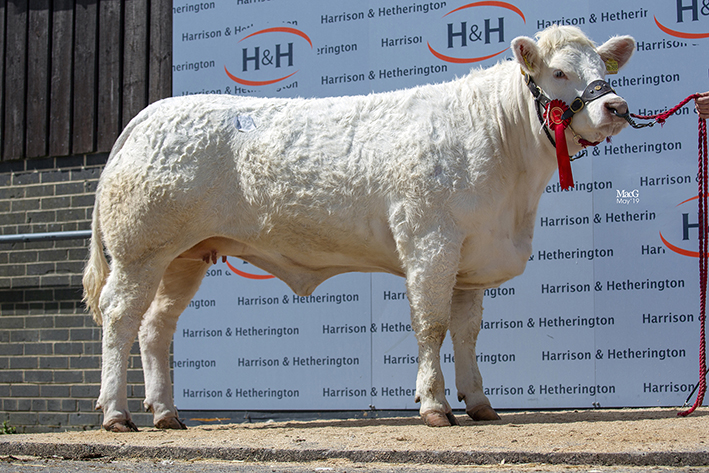 Whitemills Ltd went on to purchase another of Mr Goldie’s lots, the reserve female champion Goldies Nora for 3,500gns. The 19 month-old Nora is bred out of Goldies Jean, who also goes back to Goldies Formidable and is sired by Gretnahouse Heman. 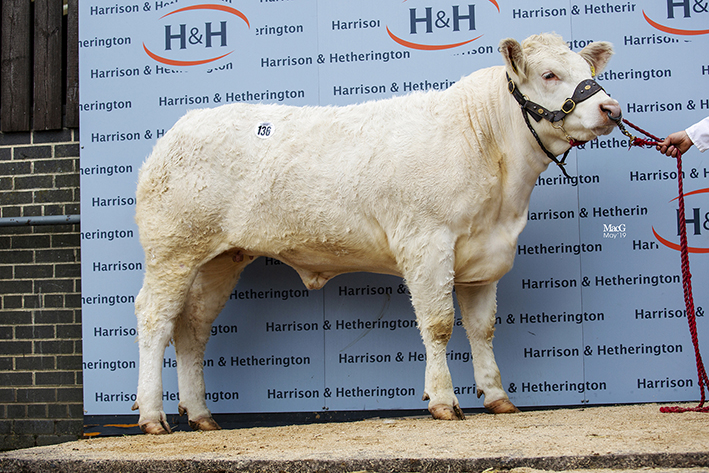 A cracking draft of heifers from Roy and Matthew Milne, Lhanbryde, Morayshire, was up for sale next and saw the ten heifers on offer average £1785.00 with a top price of 4,000gns for the 16 month-old Elgin Natty, who was purchased by Ellis Mutch to join his herd in Forglen, Banffshire. She is sired by the 11,000gns Woodpark Elgin, while her dam Elgin Juliet, a half-sister to the 28,000gns Stirling supreme champion Elgin Glenlivet, goes back to the Highland show supreme champion Elgin Highroller.

Another of the Milne’s family top lots was the February 2017-born Elgin Nicky, who sold served to Messrs Bowen, Molleston, Pembrokeshire for 3,200gns. Again sired by Woodpark Elgin, Nicky is out of the 12,000gns Caylers Gladiator daughter, Elgin Ida.

The highest priced cow and calf outfit was bred and consigned by Fred, June and Emma Andrews of Holmfirth, Yorkshire. Holtstead Libby, a December 2015-born first calving heifer, who sold served to the 10,000gns Stirling senior champion Chunal Dougie, is sired by the 12,000gns Carlisle reserve senior champion Wesley Equinox and her dam Holtstead Gina goes back to the 30,000gns Dingle Hofmeister. She was purchased by E Hourston, Swannay, Orkney, along with her six month-old, Blelack Digger-sired bull calf, Holstead Odin for 3,500gns.