There was a strong commercial interest in Charolais bulls at Welshpool on Thursday 8 November at the breed’s official autumn sale. Bidding peaked at 7,000gns and 27 bulls sold to an average of £3,771, while the demand for Charolais females fuelled a 4,400gns top bid. 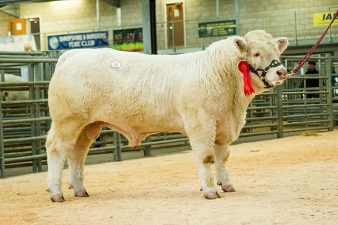 Topping the lots and securing a price of 7,000gns in a joint purchase from Society President Archie MacGregor, Kilsyth, Glasgow, and Wallace Brown, Kilmarnock, Ayrshire, was the 14-month-old Maerdy Norseman from Flintshire Vet, Esmor Evans, who had also secured the top price of 40,000gns at Stirling bull sales last month. Norseman was awarded a red ticket at the pre-sale show and is sired by the 10,000gns Stirling reserve senior male champion Blelack Fabulous, while his dam Maerdy Jinny is a daughter of the easy calving and short gestation Blelack Digger.

Next in the trade stakes was the day’s supreme champion Dooley Nemo who has been shown successful throughout the season, with his highest accolade being crowned male and junior male champion at this year’s Nation 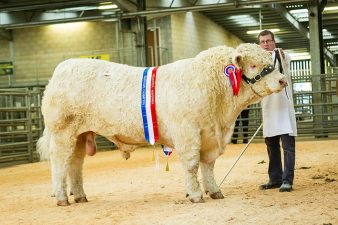 al Charolais show in July. His dam Guthrie Iona, who was purchased in-calf to Nemo at D and P Murray’s Guthrie herd dispersal sale in October 2016 for 3,400gns, is a daughter of the Royal Highland show supreme champion Balmyle Eclipse, and he is sired by Stirlingshire-bred Falleninch Hamzoraj. The May 2017 born Nemo who was purchased by SO Jones, Corwen, Clwyd for 6,500gns was bred and exhibited by David Thornley, Swadlincote, Derbyshire, who also went on to secure another top price of 4,200gns for his 16 month old 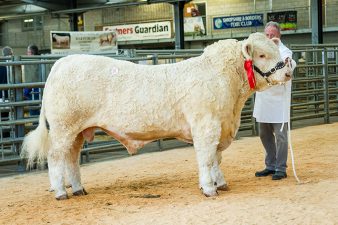 class winner Dooley Nissan. Sired by the National Charolais show supreme champion Davally Igolo and out of the Perthshire-born Harviestoun Harriet who goes back to the 15,000gns Carlisle supreme champion Burradon Talisman, he was purchased by D Morgan, Talybont, Ceredigion. 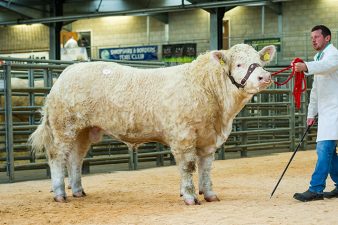 Next and selling for a 6,200gns price tag was a June 2017 born entry from Arwel Owen, Foel, Powys. Trefaldwyn Nebo, a son of Goldies Eddy and the Blelack Digger-sired Trefaldwyn Harmony stayed local when purchased by MPB Ashton and Sons, for their Welshpool based suckler unit. 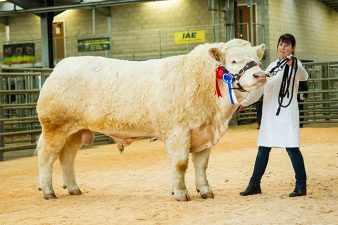 Caylers Nixon was next in the trade stakes at 5,000gns after he caught the eye of TN Lightfoot, Callington, Cornwall, when he was tapped out as reserve supreme champion by judge Emma Andrews in the pre-sale show. The Barker Family of Caylers Charolais, Nuthampstead, Hertfordshire, are the breeders of this 18 month old son of the Irish born Rosana Jupiter, bred out of the Thrunton Dominator daughter Caylers Graceful. 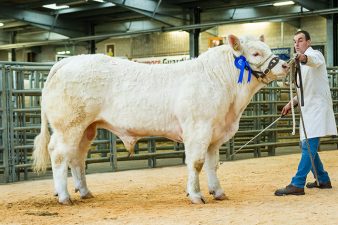 Two entries from Messrs Roberts and Jones Llangadfan based Montgomery herd were the next highest priced lots and both were sired by the 8,000gns Carlisle supreme champion Gretnahouse Jugular. Top priced was the 15 month old Montgomery Ned who secured a bid of 4,800gns from GG Morris, Brecon, Powys. He had been handed a yellow ticket earlier in the day and is out of the Elgin Columbo-sired Montgomery Hafren. 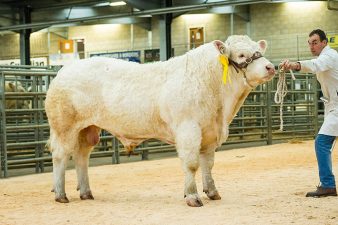 Earlier in the sale their 18 month old entry Montgomery Nefyn sold for 4,000gns. He had also been successful in the pre-sale show, being awarded third place in a strong class of intermediate’s. This time out of Montgomery Imperial who goes back to Blelack Digger, he was purchased by W Pugh, Rhayader, Powys. 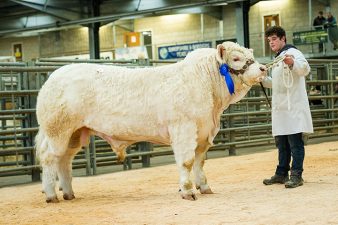 Also hitting the 4,000gns price tag was Wyn Rees and Son’s Hendy Nadal from Llangurig, Powys. After being placed second in class, the 14 month old Nadal by Davally Illusion was knocked down to EH Anwyl, Llanbrynmair, Powys. His dam is Hendy Gentle, a daughter of the 8,500gns Killadeas Contact. 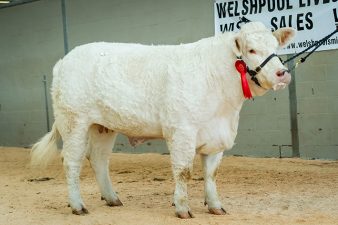 A strong entry of females saw the prices peak at 4,400gns for a class winning entry from Ann Orr-Ewing, Purton, Wiltshire. Foxacre Marcina, a July 2016 born daughter of Wesley Forceful and Moreton show reserve female champion Foxacre Flavia, was bought by Tomos Rich, Cilcain, Flintshire, who went on to purchase both of Griff Morris’ cow and calf outfits on offer.

The first and top priced of Mr Morris’s cow and calf combo’s from Llanwern, Powys, secured a 4,000gns bid from Mr Rich. The 2012-born cow Cargriff Harmony and her seven month old heifer calf Carrgriff Octave were the pair and Harmony whose sire is the Irish-born Goldstar Echo was sold served to Thrunton Larry who is also the sire of Octave.

An added feature of the sale was the dispersal of Rodney and Jake Gregory’s, Chasewater-based Kerling herd from Cornwall. Their top lot was another mother and daughter pair. The cow Wesley Fettle, who sold served to the 9,000gns Carlisle supreme champion Sportsmans Neptune, is a 2010 born daughter of the 10,000gns Balmyle Dingle and out of the Maerdy Rock-sired Wesley Capri, while her six month old her heifer calf Kerling Octavia, is sired by Gretnahouse Loomis. Together they commanded a 3,000gns bid from Neil Barclay, Insch Aberdeenshire.

Also bolstering the female section were the production sale heifers from the aforementioned Arwel Owen’s 1994 established Trefaldwyn herd. The highest priced at 2,200gns was the March 2017 born Trefaldwyn Nova. Sired by Blelack Digger and out of Trefaldwyn Jadore, a daughter of Goldies Eddy, she goes home to Talsarnau, Gwynedd, with her new owner GW Williams.