A ready demand for Charolais at Dungannon on Friday 2 November saw bull prices top at 5,800gns with an of average of £3,335 for the 34 sold – eight more than last year’s corresponding sale. Two herd reductions added to the female tally with 15 heifers selling to a top of 6,500gns and averaging £3,269, while the three cow and calves on offer averaged £4,900. 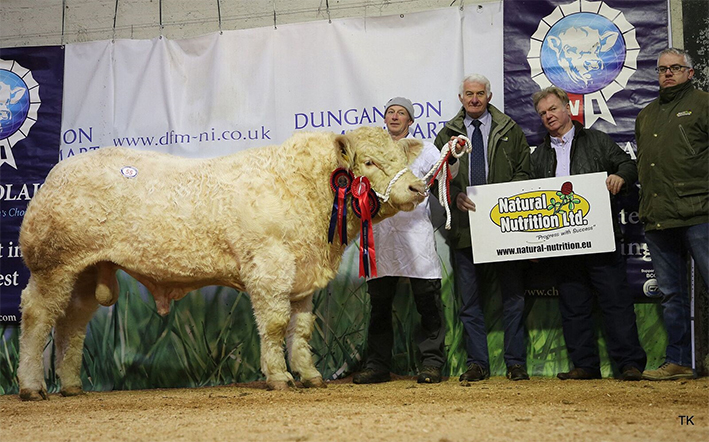 Leading the bull lots at 5,800gns was the junior and reserve supreme champion Kiltybane Norman from Seamus and Aidan Bellew, Cullyhanna, Co Down. Norman who was purchased by Kevin O’Neill, Dromore, Co Tyrone, is an August 2017 born son of the 16,000gns Royal Welsh show reserve male champion Anside Foreman and Kiltybane Flora, a daughter of the Great Yorkshire show interbreed champion Cretlevane Albertz. 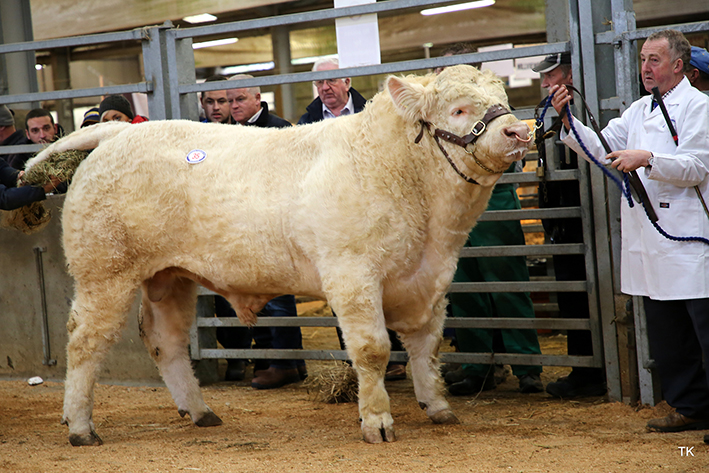 Hillviewfarm Nougat, a blue ticket winner from Adrian Richardson, Maguiresbridge, Co Fermanagh, was the next highest priced bull at 5,200gns. The 17 month old Nougat is sired by the popular, easy calving and short gestation Blelack Digger, while his dam is the French-bred Harestone Tyrol-sired and Scottish-born Elgin Elisha. He goes on to work in Donegal, Eire for new owner Dessie Graham. 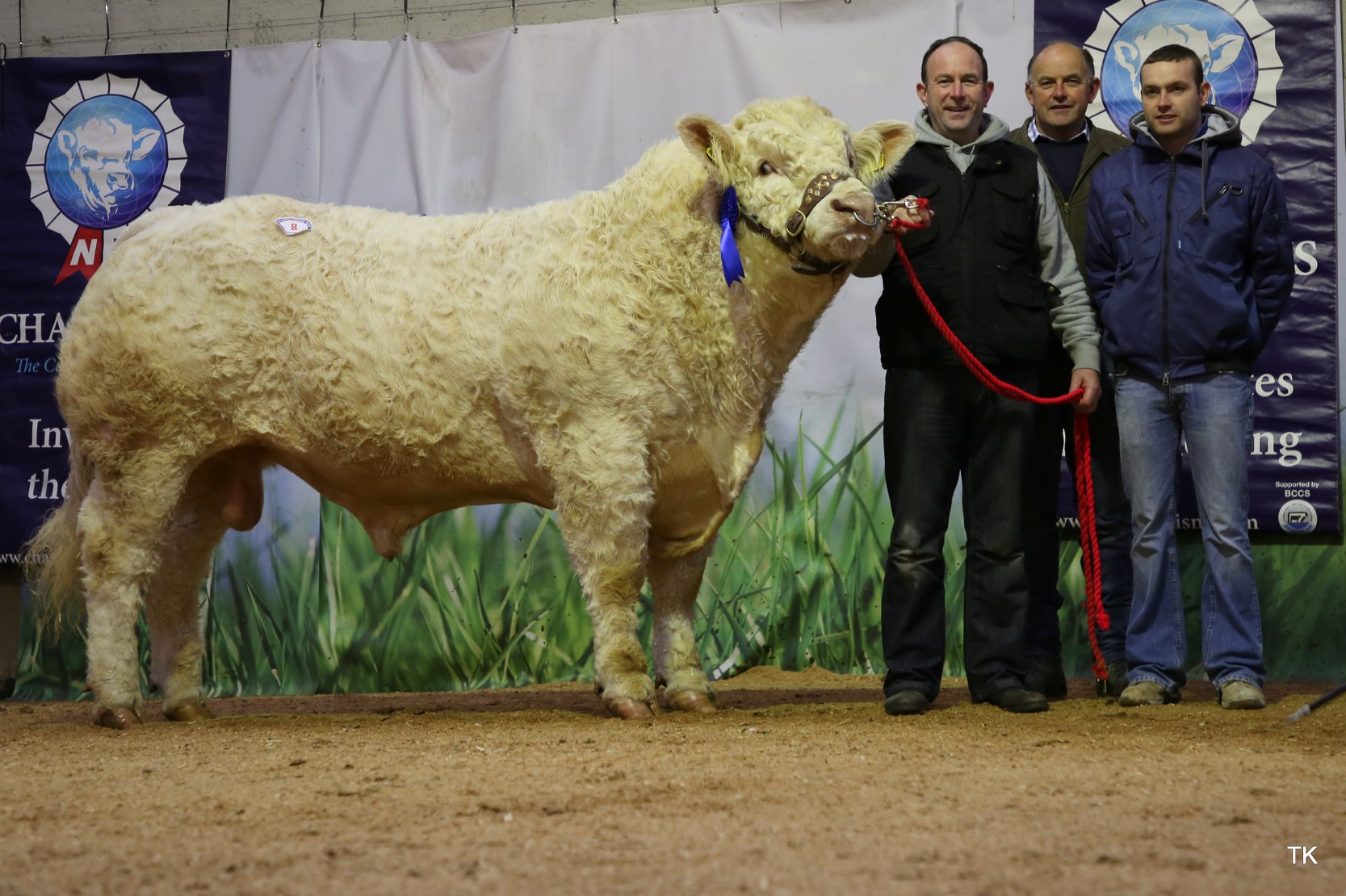 Next in the trade stakes at 4,900gns was the April 2017 born Brigadoon Neptune, who had also stood second in his class at the pre-sale show. Purchased by Andrew Canning, Dungiven, Co Derry, he is out of Rossmore Urbane, who goes back to Doonally New and is sired by the 10,000gns Stirling reserve junior champion Goldies Icon. He was consigned by breeders Albert and David Connolly, Ballynahinch, Co. Down. 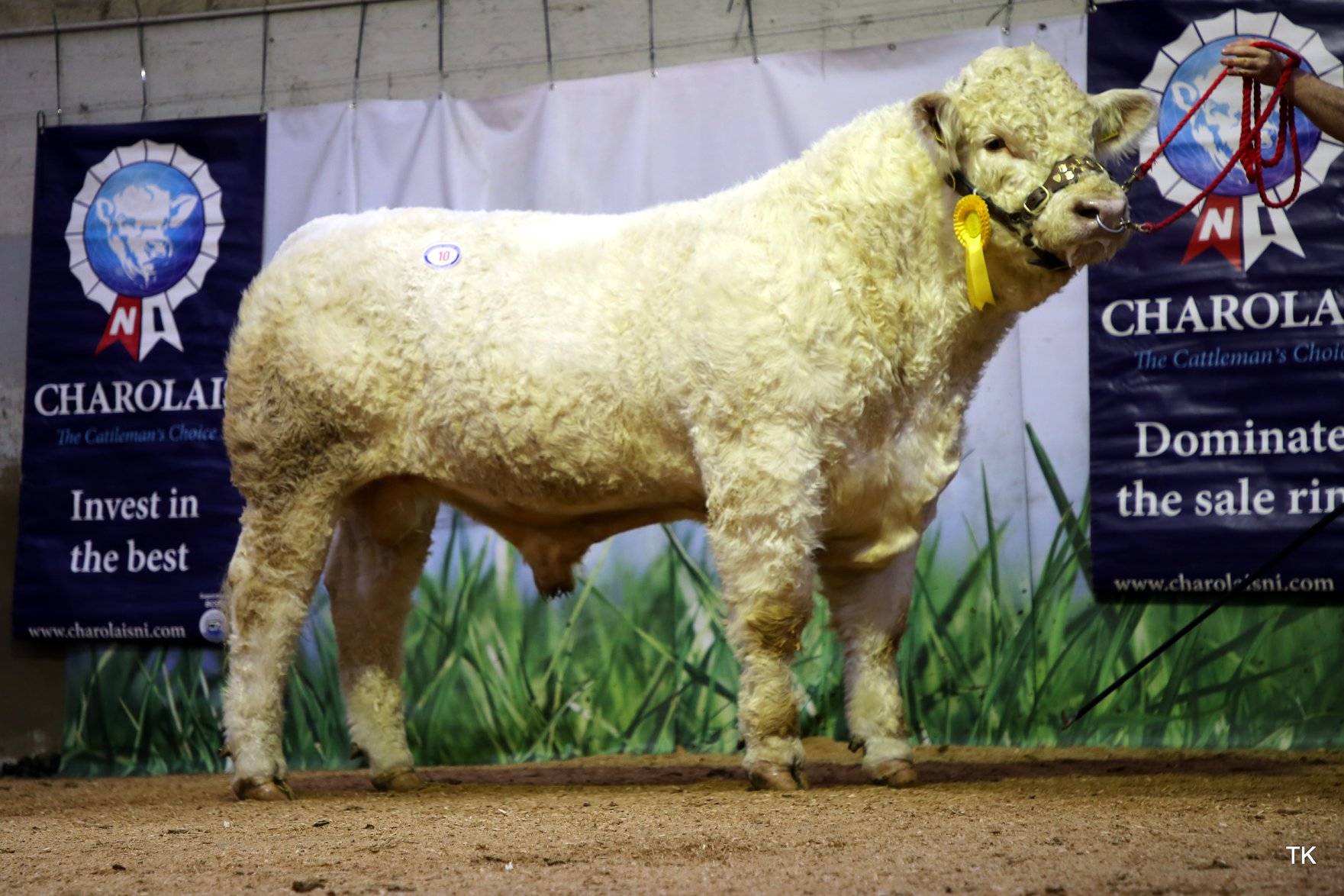 The Connolly’s had a good day, with the two lots they had on offer, averaging £4,987.50. Their other consignment, the 18 month old Brigadoon Nemesis who was snapped up by Colin Maxwell, Downpatrick, Co Down, for 4,600gns, is sired by the Royal Ulster show supreme champion Brampton Petition and out of the Irish-bred Royal Gemma. 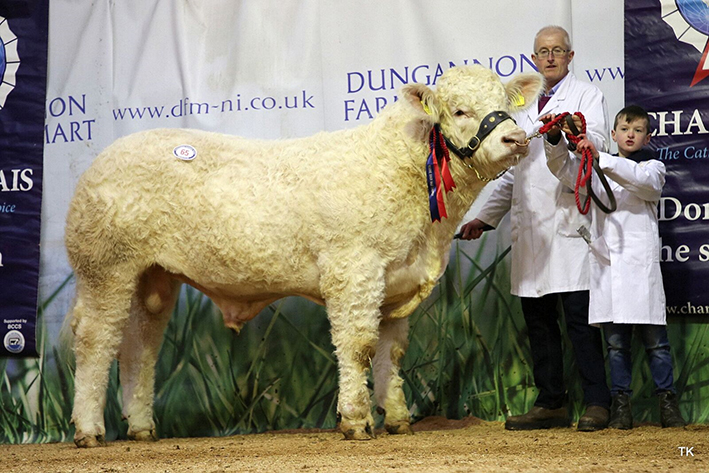 The reserve junior champion Brogher Nevada from Trevor Phair, Bellanaleck, Co Fermanagh, was next in the trade stakes at 4,800gns. The breeding here includes Vexour Freddy on to the home-bred Brogher Gemma, who goes back to the 10,000gns Perth supreme champion Thrunton Bonjovi, and this October 2017 born lad was purchased by RW Robertson, Newtownards, Co Down. 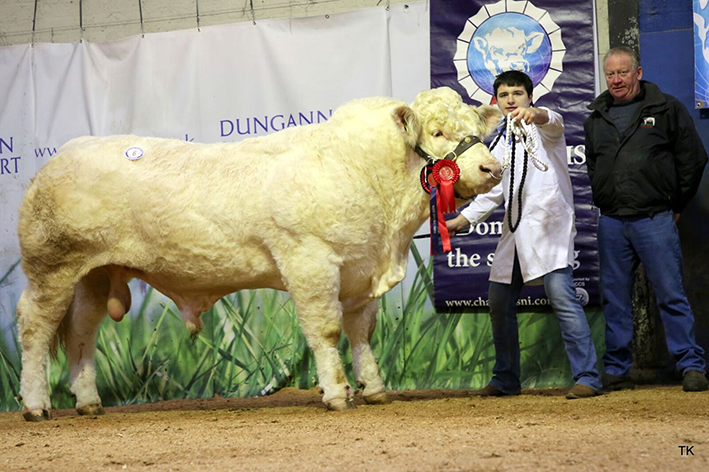 Also commanding a 4,000gns bid, this time from Andrew McCammond, Templepatrick, Co Antrim, was James McBride’s Moorlough Nougat from Strabane, Co Tyrone. The 16,000gns Stirling junior champion Clyth Diplomat is the sire of this 17 month old lad who stood second is his class at the pre-sale show, while is dam is Moorlough Heighlight, a Thrunton Voldemort daughter.

Matching the 4,000gns price tag was another blue ticket winner, the 16 month old Killadeas New. His dam Killadeas Dawn is a home-bred daughter of the Dungannon supreme champion Glencoe Victor and he is sired by the 8,000gns Blelack Blackberet. Bred and exhibited by Stuart and David Bothwell, Ballina Mallard, Co Fermanagh, he heads on to Castlewellan, Co Down, to work for M and E Rice.

The next lot, Sandelford Neeson, who had headed up his pre-sale show class, was knocked down sold at 3,800gns to Daniel McAllister, Ballycastle, Co Antrim. George Henderson, Bushmills, Co Antrim was the consigner of the June 2017 born Neeson, who is by the 26,000gns Balbithan Vespasian and out of Sandelford Finessa who goes back to the 14,000gns Goldies Usher.

A pair of bulls sold for the next highest price of 3,400gns with the first being an April 2017 born Blelack Digger son from John, Ivan and Ryan Elliott, Newtownstewart, Co Tyrone. Drumlegagh Nero, whose dam Deeleview Helen is sired by the French-bred Suzeringie, was purchased by TJ McLernon, Crumlin, Co Antrim. 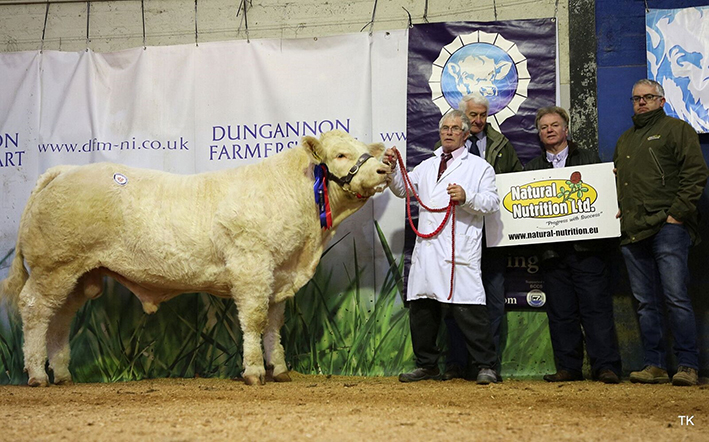 The second to sell at a 3,400gns price tag, was another Digger son, Drumconnis Necleus who had been awarded the reserve intermediate championship title earlier in the day. The 30,000gns Balmyle Bollinger-sired Drumconnis Ida is the dam of this 15 month old from John McGrath, Dromore, Co Tyrone, who stayed local when purchased by Kevin O’Neill, also from Dromore.

There have not been many Charolais females on offer at Society sales this year and the purchasers were keen to grab one while they had the chance. The drafts from the Hillviewfarm and Glencoe herds fuelled the interest and Adrian Richardson and Son’s heifers topped the lots.

Heading up the prices at 6,500gns for the Richardson family was the two year old Hillviewfarm Millie. Sired by the aforementioned Blelack Digger, and out of the 25,000gns Perth supreme champion Mowbraypark Orlando-sired Hillviewfarm Iona, she was snapped up by Colin Todd, Lisburn, Co Antrim. With another three heifers selling to new homes, the Richardson’s enjoyed a great trade and sold the four to average £5,486.

The next at 6,200gns was another of their lots, with the same sire behind her. Hillviewfarm Margaret, who is out of Hillviewfarm Dawn, a daughter of the 15,000gns Carlisle supreme champion Burradon Talisman, heads over the water to Roebuck, Yorkshire, with new Charolais breeder David Timm, who went on to purchase two out of the three Hillviewfarm cow and calves on offer.

The highest priced at 4,800gns was the mother and daughter pair Hillviewfarm Dawn – the dam of the previous mentioned lot – and her eight month old heifer calf Hillviewfarm Olive who is sired by Mowbraypark Orlando. 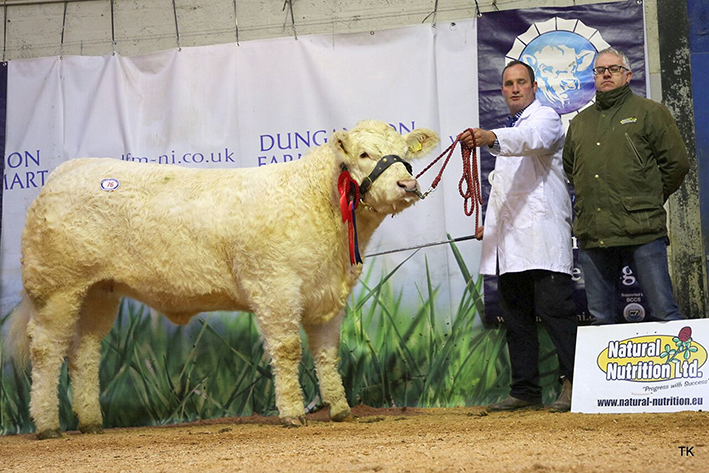 The top lot in the main heifer consignment and commanding a 4,800gns bid from Clare Ferris, Millisle, Co Down, was the Female Champion Killadeas Nancy from Stuart and David Bothwell. The 16 month old Nancy, is sired by the abovementioned Blelack Blackberet and out of the Doonally New daughter Killadeas Faithful.

Also in the money at 4,500gns, was the youngest heifer of the sale, the November 2017 born Glencoe Nelly from Paddy and Valerie McDonald, Killeavy, Co Down. A daughter of Clyth Diplomat her dam is the Bova Banker-sired Glencoe Jenny and she was purchased by Denis Quinn, Cookstown, Co Tyrone.