A small but high-quality offering of Charolais bulls saw a top bid of 5,800gns in Welshpool on Thursday 8 February, at the breed’s official spring sale, where 16 bulls sold to an average of £3622.50 and an improvement of 8% on last year’s clearance rate.

Leading the way at 5,800gns was Gareth Jones’ reserve champion from Cwmtirmynach, Bala. The May-2016 born Esgob Morgan who was snapped up by Edward Bros, Oswestry, Shropshire, is a son of Alwent Goldbar and the 26,000gns Carlisle junior champion Anside Excalibur daughter, Esgob Glain. 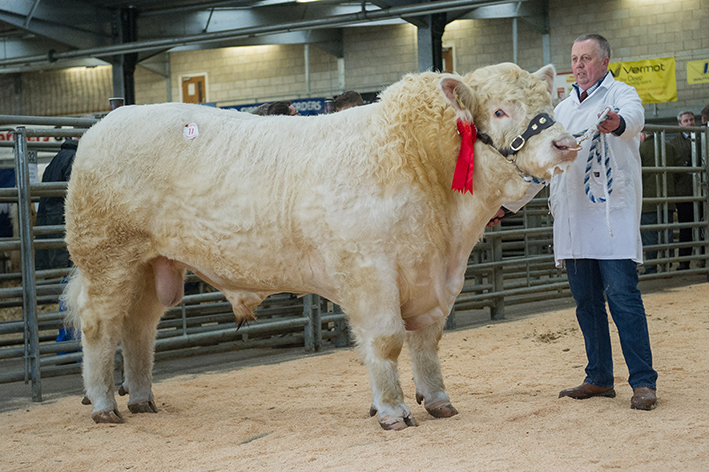 Next in the trade stakes and purchased at 4,800gns by RW Owen, Garn Solbenmaen, Gwynedd for was Trefaldwyn Magnus, who had been tapped out second in his class at the pre-sale show for breeder and exhibitor Arwel Owen, Welshpool, Powys. The 17-month-old Magnus boosts an impressive pedigree, being sired by the 28,000gns Perth supreme champion Brampton Nacodar and out of the 11,000gns Royal Welsh Show female champion Trefaldwyn Fancygirl, a daughter of the 30,000gns Dingle Hofmeister. 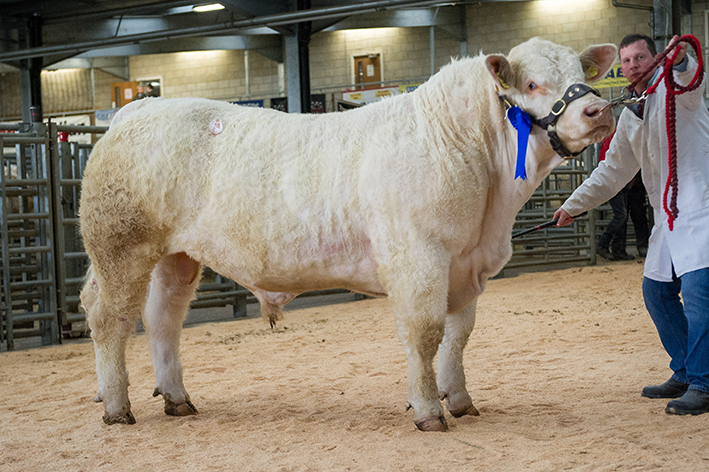 Trefaldwyn Magnus sold for 4800 gns from Mr R A Owen

Just behind at 4,600gns was a yellow-ticket-winner from Mrs Ann Orr-Ewing, Purton, Wiltshire, the
Wesley Forceful son Foxacre Miletus. The May-2016 born Miletus is out of the Three Counties reserve junior heifer champion Foxacre Galante and goes home to work in Knighton, Powys for RP Morgan and Son. 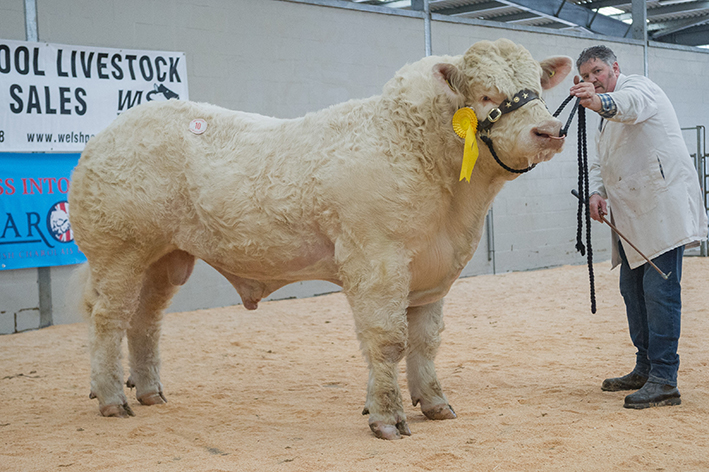 Foxacre Miletus sold for 4600 gns from Mrs A Orr-Ewing

Two bulls sold for 4,500gns apiece and both were offered for sale by the aforementioned Arwel Owen. The first, Caenest Morgan who was bred by J and E Evans, Dryffryn Ardudwy, Gwynedd had also been awarded a yellow ticket at the pre-sale show. This 14-month-old who caught the eye of TT Jones and Co, Llanbrynmair, Powys, is by the proven high performing, short gestation and easy calving Blelack Digger and out of Trefaldwyn Eternity who in-turn is sired by the 30,000gns Balmyle Bollinger. 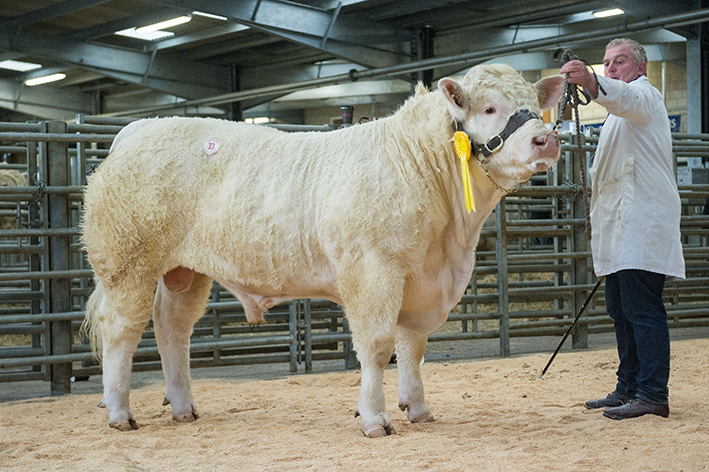 Caenest Morgan sold for 4500 gns from Mr R A Owen

Minutes later Mr Owen’s secured another bid of 4,500gns, this time for the home-bred November-2016 born Trefaldwyn Max who is also sired by Blelack Digger. His dam is the Goldies Eddy daughter Trefaldwyn Ice and the NPTC Group, Newtown, Powys were his winning bidders. 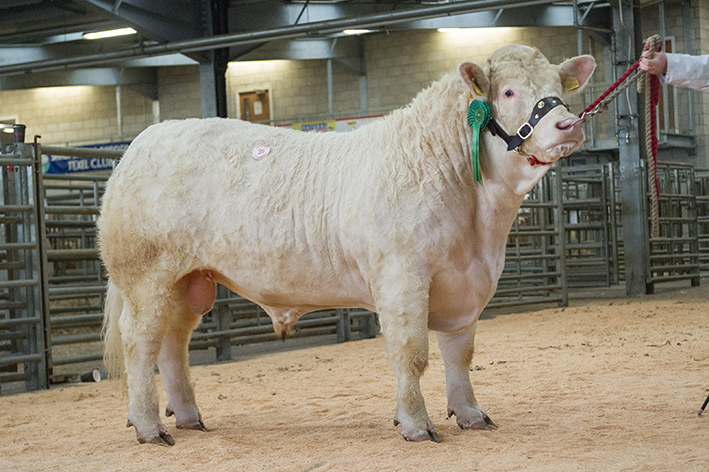 Trefaldwyn Max sold for 4500 gns from Mr R A Owen

Next, the 22-month-old Montgomery Meic commanded a 3,500gns bid from Gipsy Hall Farms, Wilmcote, Warwickshire. Meic who stood third in his class in the morning’s show is sired by the 9,000gns Balmyle Harlequin, out of the 30,000gns Dingle Hofmeister daughter Montgomery Iarll and was bred and exhibited by Gareth Roberts and Jones, Welshpool, Powys.

A trio of bulls were knocked down at 3,000gns a piece, with the first coming from Highfields Park Farm, Withyham, Sussex. The 20-month-old, blue-ticket winning Chameran Marek who was purchased by WF Palmer and Sons, Truro, Cornwall, is sired by the 12,000gns Cumberland Show champion of champions Sandelford Harrison and out of Edenhurst Fleur – another Dingle Hofmeister daughter.

Matching the 3,000gns price tag was the September-2016 born Wissington Mickey. Mickey, an entry from Jenny and John Rix, Nayland, Essex who was exhibited by Darren Knox was purchased by DWR Reynolds and Son, Knighton, Powys, is by the aforementioned Blelack Digger and out of the home-bred Gretnahouse Ferdinand-sired Wissington Jolly.

Also hitting the 3,000gns price tag was Esmor Evans’ 14-month-old Maerdy Mario from Mold, Flintshire. Maerdy Gwlan is out of French-bred Begonia daughter Maerdy Poem and sired by the 10,000gns Stirling reserve senior champion Blelack Fabulous. The Williams’ of Holt, were the successful bidder and take him home to their Wrexham-based unit.

The only female of the sale was a 2-year-old entry from Mr R J Butler, Rudford, Gloucestershire. Commanding a bid of 2,100gns from C Wardle, Sandbach, Cheshire was the 15,000gns Carlisle supreme champion Burradon Talisman daughter Carrigbeg Ladyjane who sells served to Davally Illusion.

Challenges ahead; time to think about your forward Beef strategy. » « Polled for profit