It was a fine day last summer when we visited the JordanCastle herd of polled Charolais in Wellow, managed by Sydney Carr and his daughter Laura. Alongside their pure Charolais herd which they run on a commercial basis, they host school visits in their purpose-built education facility and entertain guests in their three holiday cottages set in the idyllic Nottinghamshire countryside.

The education enterprise is the brain child of Laura, who feels strongly about the benefits of teaching children how their food is produced. It was set up in partnership with the Higher Level and now Higher Tier Countryside Stewardship Scheme which enables them to offer free visits to schools. They also offer visits to other organisations whether it be farming or local interest groups.

Sydney is the third generation to farm at Jordan Castle Farm after his grandfather and uncle purchased the farm in 1939 and both he and his daughter Laura were born in the farmhouse. The 270-acre holding consists of 50% grazing and 50% arable which supports the winter feeding needs of the cattle with the remainder sold as milling wheat. The 200 cattle are fed hay and 1kg of barley per day in the winter and when brought in, are kept in their management groups sorted by age with the spring and autumn calvers kept apart.

Charolais cattle are renowned for their good temperament and this herd is a shining example. The Carrs have culled any cattle that show any signs of bad disposition and the result is a herd that are quiet, friendly and easy to manage. This is of paramount importance in this low maintenance system as the main day-to-day work is undertaken by Sydney while Laura is away working during the week. Sydney’s motto is “decent cattle, decent feed, it all comes down to management”.

Easier management was the reason why Sydney was initially drawn to polled Charolais with their reputation for being easier calving. He said, “It has paid off from the start. I have only had to assist one calving in the past year”.

Sydney joined the polled society, as it was then, in 1987 after purchasing his first polled Charolais bull in 1982 from Ralph Needham’s Cockerington herd. These days, the farm’s 75 breeding females produce stores to sell at nearby Newark in the Spring and Autumn, whilst heifers are kept for replacements and pedigree sales. The herd averaged £1100 for their 17-18 month old steers and heifers sold through Newark in 2016. Laura said “When we finish cattle they usually attain a U-grade and average £1250. Currently I am exploring the benefits of selling some of our animals as meat direct to the consumer”. 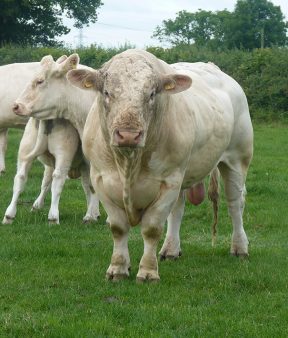 Stock bulls are selected for style and temperament and their latest addition Cockerington Justice has turned out to be the quietest they have had. There are three bulls running with the herd at present; the homebred JordanCastle Heathcliff and Alwent Impact are also earning their keep. Sydney comments, “We hope to keep one of Heathcliff’s sons for breeding in the future. Unusually we purchased Impact from Steve Nesbitt at just 13-months-old, but he has been a great success. We tend to work our bulls for six years, and bring in fresh bloodlines for our replacements”.

Calving is in the Spring and Autumn and is spread over a few weeks for ease of management. All the herds females were born on farm with the exception of one purchased from the Needhams at the same time as Cockerington Justice. Laura remarked, “Cockerington Jodie was a very nice Christmas present!”

Heifers are calved down at approximately two years nine months and are routinely still calving at 12 years old with the oldest mother this season being 16.

The Carr’s breeding bulls are usually sold at about 20-22 months and Sydney commented “People want to purchase bulls that are ready to work and by that age they can see what they’re getting. We advertise through our website, Sell My Livestock and the Newark Market newsletter. We also have lots of repeat customers who like our easy-calving, good-tempered bulls”.

On the day of our visit, James and his mum Serena Underwood of Gillingham, Dorset were visiting to look at the 22-month-old JordanCastle Lionheart. The Underwoods established their Pennymore herd in March last year, with the purchase of five cows and calves from the Cockerington herd. They obviously liked the look of Lionheart as he subsequently travelled to his new home in Dorset at the end of July. James recently commented “I chose him for his nice nature and good EBV’s. I am just starting out with Charolais and he has proved to be a lovely quiet bull who I move everyday and he has never given me any problems. He’s running with my eleven breeding females at the moment, and the five cows who I put him to first are due to calve in June and July. Working full time, I have chosen to calve in the long days of the summer months. I am looking to put him with some sucklers once he has his first calves on the ground.”