A combination of pedigree and commercial interest saw a flying trade of Charolais bulls at Welshpool on Thursday 9 November. Bidding peaked at 7,200gns, while 13 lots traded at 5,000gns and above. The 43 bulls sold averaged £4444.19, an increase on last year of £588 and clearance rates were also up on the year by an incredible 31% to 84%, proving that the demand for Charolais bulls is on the rise.

Society CEO Peter Phythian commented, “We are delighted that Charolais trade is going from strength to strength, with every Society sale this year improving on numbers sold and average prices. The commercial producers were out in force today looking to secure a Charolais bull so that they can capitalise on the recent trend in the store markets where Charolais sired suckler calves are topping the markets on weight for age”. 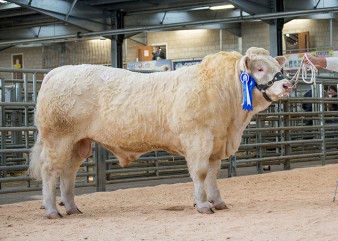 The sale leader at 7,200gns was the reserve champion Cliftonpark Madoc from Mrs JM Robinson, Tenbury Wells, Worcestershire. The March-2016-born Madoc is sired by the French bred Rosanna Fameux and out of the homebred dam Cliftonpark Irish, who goes back to the 10,000gns Carlisle reserve senior champion Thrunton Bravado. He was purchased by Messrs P and M Davies, Sennybridge, Powys. 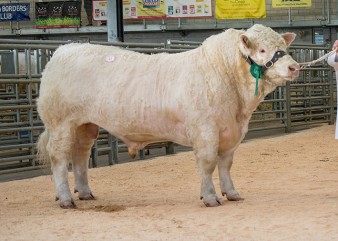 Close behind at 7,000gns and the first of three to sell for breeder and exhibitor Kevin Thomas, Capel Iwan, Dyfed – whose sales averaged £6,300 – was the 18-month-old Moelfre Maestro. Maestro who was purchased by E Jones, Caernarfon, Gwynedd, is the first bull to sell by the 12,500gns Balmyle Impression, whose daughters have been retained, while the dam is the Gretnahouse Vigorous-sired Moelfre Dollar. 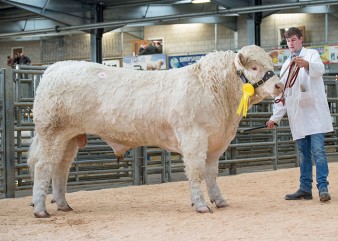 Also in the money for Mr Thomas was the yellow-ticket winner and April-2016-born Moelfre Major. Another son of herd sire Impression, this time out of Moelfre Ianna who in-turn is sired by the 16,000gns Royal Welsh show reserve male champion Anside Foreman, he was purchased by B Bayliss and Co, Whitney-on-Wye, Herefordshire for 6,400gns. 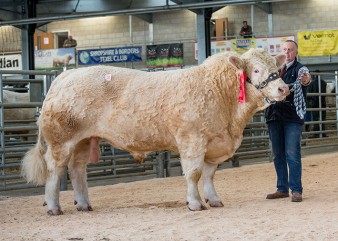 Securing 6,800gns was the April-2016-born Esgob Magnumgold, who was one of three bulls to top his class in the pre-sale show, for breeder and consigner Gareth Jones, Bala, Gwynedd, who went on to sell all three for an average price of £6,055. Staying local when snapped up by J Roberts, Bala, Gwynedd, Magnumgold is sired by Alwent Goldbar and his dam Esgob Gold is a former Royal Welsh Show junior female champion by the 26,000gns Carlisle reserve supreme champion Anside Excalibur. 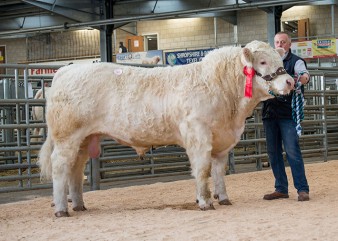 Mr Jones next highest priced offering was the red-ticket-winning Esgob Mint, who is out of another Anside Excalibur daughter, Esgob Impulse and sired by Goldies Eddy. IW Roberts, Dolwyddelan, Conwy was the purchaser of this 17-month-old at 5,500gns. 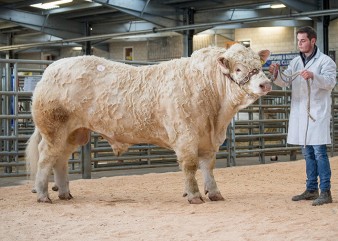 Four bulls were knocked down at 6,000gns a piece, with the first coming from JAW Rees, Llanidloes, Powys. TJ and DA Stephens, Neath, West Glamorgan, were the last men in on the March-2016-born Hendy Majestic, who is sired by Tullygarley Rollerball and out of Hendy Topsy who goes back to Balthayock Matthew. 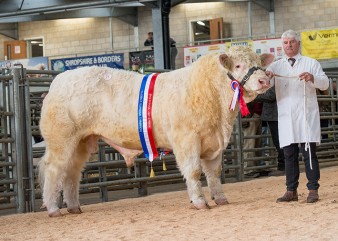 Another to bring 6,000gns when chapped down to TN Lightfoot, Callington, Cornwall, was Peter and Sheelagh Donger’s supreme champion Seawell Merlo. The 19-month-old Merlo is a son of the French bred Maerdy Flambeau and Seawell Creative who in-turn is sired by the renowned Irish AI bull Doonally New. 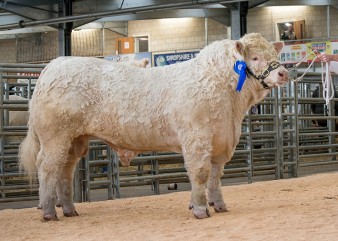 Also selling for a 6,000gns ticket price was the April-2016-born Maerdy Myfanwy who was snapped up by DT Edwards and Co, Trecastle, Powys. The breeding here includes sire the French bred Maerdy Gouverneur and dam Maerdy Glorious, a daughter of the Irish National Show champion Baladin. Myfanwy placed second in his class for breeder and exhibitor, Flintshire Vet Esmor Evans, who had a successful show also securing first and third places for his other entries. 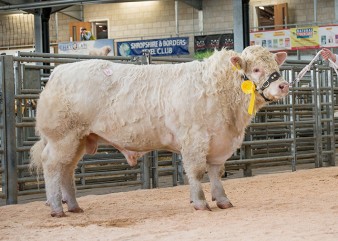 Equalling the 6,000gns price tag for Mr Evans was the 17-month-old, yellow ticket winner, Maerdy Morlo, who was purchased by Simon and Suzanne Frost, owners of his sire Vexour Freddy. Simon who runs a 125-spring-calving suckler herd in Bakewell, Derbyshire, did his homework before visiting the sale and selects his bulls very carefully on EBV’s as well as looks commented that, “He has an undoubtedly superior carcase and he has out-scanned his intermediate figures”. Morlo’s dam Maerdy Gwin is sired by the proven high performing short gestation and easy calving Blelack Digger. 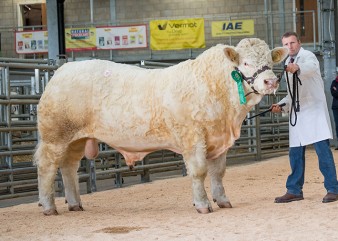 Commanding a 5,600gns bid from Tynybryn Farms, Tregynon, Powys, was the April-2016-born Caylers Maverick. Sired by the Irish bred Rosanne Jupiter and out of the Maerdy Uniroyal sired Caylers Ella, Maverick was bred and exhibited by the Barker family of Caylers Charolais, Nuthampstead, Hertfordshire. 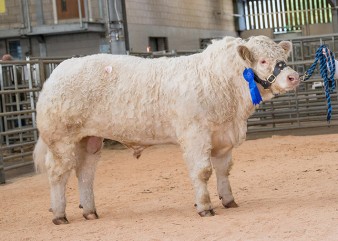 Next in the trade stakes at 5,500gns was a 16-month-old bull offered by the Corbett family, Felindre, Powys, and purchased by Messrs Evans, Pwllhelli, Gwynedd. Teme Magnum who had been tapped out second in his class at the pre-sale show, boasts some top-class pedigree breeding behind him. His sire is the 70,000gns Royal Welsh supreme champion Barnsford Ferny, while his dam Pedr Indigo – who can count breed champion awards at both the Shropshire and Oswestry show amongst her many ring successes – is sired by the 12,000gns Royal Welsh show supreme champion Thrunton Classic.

The females on offer met with a ready trade, with all six finding new homes and averaging £2,826.25. Leading the bids at 4,000gns was the female champion from Gerwyn Jones, Nebo, Conwy.
The March-2015-born Graiggoch Lucy, is a daughter of the 16,000gns Stirling junior champion Clyth Diplomat and the 25,000gns Perth supreme champion Mowbraypark Orlando sired Thrunton Starband. She was purchased by Kevin Thomas who was in the mood to spend after doing so well with his bull sales earlier in the day.

The 18-month-old reserve female champion from EH Pennie and Son, Montgomery, Powys was next in the trade stakes at 3,100gns. Sarkley Marianna who was purchased by T Rich, Mold, Flintshire, is sired by Lisnagre Hansome and out of Sarkley Brianna who goes back to Roundhill Rocky.

Finishing off the female trade and trading for 2,700gns apiece, were a pair of two-year-old Anside Excalibur daughters, bred and exhibited by the aforementioned Gareth Jones. Esgob Lollypop and Esgob Lea who sold served to the 12,000gns Caylers Hustler, both took the fancy of Mr D Owen and went on home with him to Aberdovey, Gwynedd.