A bumper show of Charolais backed by soaring demand produced a record breaking trade at Dungannon on Friday 3 November, at the Northern Ireland Charolais Club Autumn sale. Bidding peaked at 8,000gns in both the male and female sections and 26 bulls sold to an average of £3,428.65. The 8,000gns secured for the trade topping female Battleford Lola is a Charolais sale centre record.

Leading the bids for the bulls at 8,000gns was the May-2016-born Mountjoy Morgan, who had been tapped out first in his class at the pre-sale show for breeder and consigner Caldwell McAskie, Mountjoy, Co Tyrone. Morgan is sired by the Royal Welsh reserve male champion Montgomery Ianto and is out of the homebred dam Mountjoy Ultra who goes back to Gaer Positive. He goes on to work in Derryhouse, Co Armagh for Messrs McGinnity.

The supreme, male and senior champion Coolnaslee Martin was next in the trade stakes at 6,000gns. He was exhibited by herd manager Stuart Wilson on behalf of his owner and new custodian of the Coolnaslee herd Jonathan Crawford, Maghera, Co Derry, son of the late Gilbert Crawford. The 17-month-old Martin was snapped up by Seamus Conroy, Tassagh, Co Armagh, and his breeding includes his sire, the 10,000gns Carlisle intermediate champion Ratoary Icebreaker, who is rated amongst the top five percent of the breed for calving ease and dam Coolnaslee Gina who in turn is sired by the Balmoral Show supreme champion Goldies Carnival.

Another entry from Mr Crawford sold for 4,400gns. Coolnaslee Max a June-2016-born son of Ratoary Icebreaker and the Goldies Carnival sired Coolnaslee Honor was purchased by S Windrum, Ballygowan, Co Down.

Commanding a 5,200gns bid from the Rogers Family, Ballynahinch, Co Down, was the reserve senior male champion Sandelford Mason from breeder and exhibitor George Henderson, Revallagh, Co Antrim. The 17-month-old Mason is sired by the 13,000gns Stirling reserve intermediate champion Conval Frank and out of Sandelford Fern, a daughter of the 14,000gns Goldies Usher.

Liam Johnston Mountain herd from Tempo, Co Fermanagh was behind the next transaction, when Mountain Magnificent was purchased by Messrs McKeagney, Maghera, Co Derry for 5,000gns. Magnificent who was tapped out third in his class at the pre-sale show, is a 16-month-old son of the Ballymena Show champion Derrygiff Jester and the Oscar sired Derrygiff Clare.

The next highest price of 4,200gns was bid by James Watson, Portadown, Co Armagh for one of the youngest lots of the sale. The 12-month old Brogher Major who stood second in his class earlier in the day for consigner Trevor Phair, Bellanaleck, Co Fermanagh, comes from show-winning breeding, being sired by the 12,000gns Carlisle reserve senior champion Wesley Equinox and bred out of the Fintona Show class winner Brogher Gigi who goes back to the 55,000gns Balmoral Show interbreed champion Sportsmans Columbo.

Staying local when snapped up by Robert O’Neill, Dunloy, Co Antrim was a yellow ticket winning entry from John Currie, Ballymena, Co Antrim. Tullygarley Marco, a June-2016-born by Davally Illusion and out of the Blakestown Endorse sired Tullygarley Harriet was sold for 3,600gns.

An 18-month-old son of the 10,000gns Perth supreme champion Thrunton Bonjovi, bred out of Ballymather Ivy, a Coolnaslee Asprey daughter, was next in the trade stakes at 3,100gns. Ballymather Matrix from Ian Rea, Nutts Corner, Co Antrim was purchased by WJ McClenaghan, Drumreagh, Co Down.

The star of the female section was the two-year-old female champion Battleford Lola ET, who broke the sale centre record for Charolais females when she was knocked down at 8,000gns. This entry from Bartley Finnegan, Moy, Co Tyrone, who is sold in-calf to Blelack Immaculate, will be travelling across the water with her new owner Blair Duffton from Huntly, Aberdeenshire. She is sired by the Black Isle Show champion Lochend Apache and her dam Blelack Usp is sired by the 25,000gns Perth supreme champion and Royal Show junior male champion Thrunton Socrates.

Attracting a bid of 5,000gns when she was purchased by Clare Ferris, Millisle, Co Down, was the 19-month-old class winner Hillviewfarm Margo from Adrian Richardson, Maguiresbridge, Co Fermanagh. Margo who is sired by the renowned easy calving and popular Blelack Digger is out of Hillviewfarm Gina who goes back to the 14,000gns Royal Ulster Show junior male champion Killadeas Jack.

The next three entries were all consigned by Robin and Agnes Todd, Corbet, Co Down. Firstly, selling for 2,600gns was the blue-ticket-winning Cappagh Lydia, sold served to Alwent Goldbar, the April-2015-born Lydia, by the 18,000gns Thrunton Fairfax and out of the 14,000gns Goldies Usher daughter Cappagh Esther, caught the eye of David Adams, Portglenone, Co Antrim.

Matching the 2,600gns price tag for the Todd family was the 25-month-old Cappagh Lois, this time going home to Teer, Co Down, with Phelim and Bronagh Caragher. The Blelack Goldenboy sired Lois, whose dam Cappagh Dawn is sired by 15,000gns Carlisle Supreme champion Burradon Talisman ,collected a yellow ticket at the pre-sale show and is sold served to the aforementioned Conval Frank.

Mr and Mrs Todd went on to secure 2,500gns for another 25-month-old Goldenboy daughter, this time out of the Burradon Talisman sired Cappagh Divine. Cappagh Lily who is in-calf to Davally Illusion was purchased by Stephen McGuinness, Greysteel, Co Derry.

The final lot to make 2,500gns was Drumlone Marina, who had placed second in her class for breeder and exhibitor Kenneth Veitch, Lisbellaw, Co Fermanagh. Micheal McVeigh, Dungannon, Co Tyrone, was the man with his hand in the air when the hammer when down on this January-2016-born, Pirate sired daughter of the Irish-born Doon Eleonora, who in turn is sired by the 18,000gns Perth intermediate champion Fury Action. 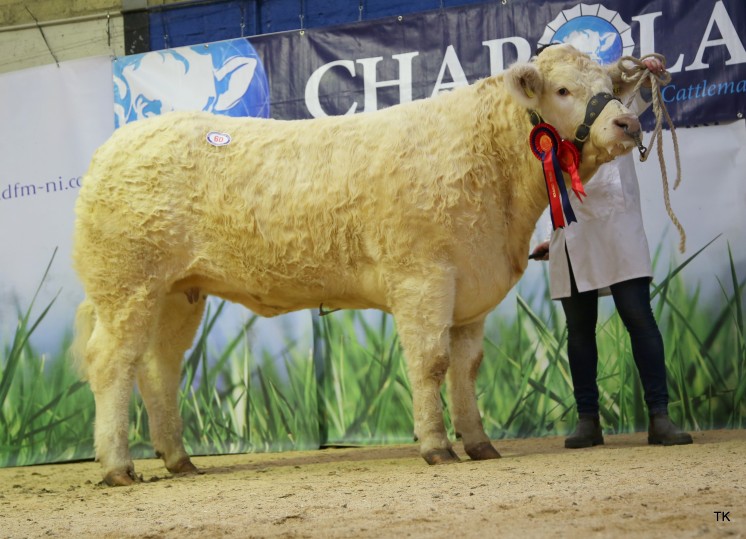 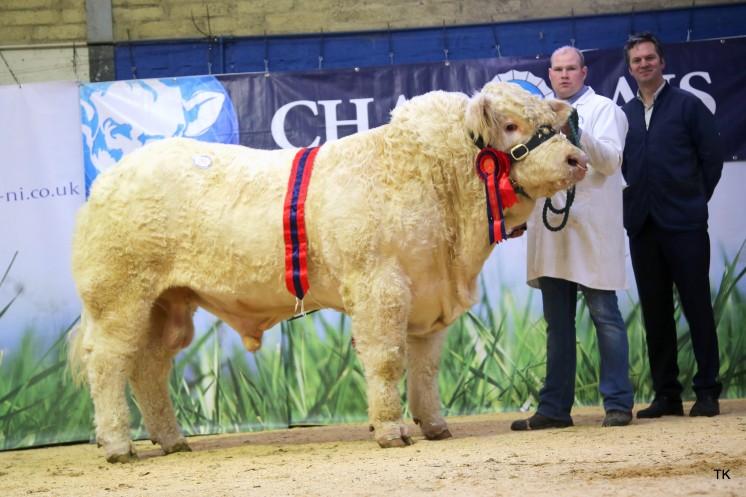 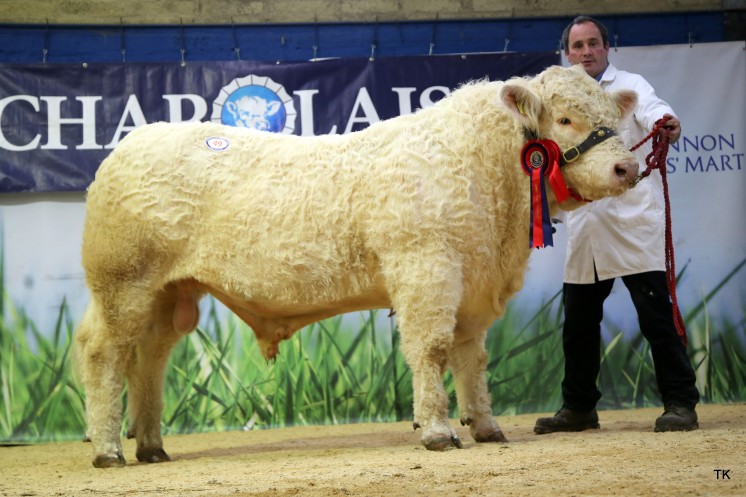 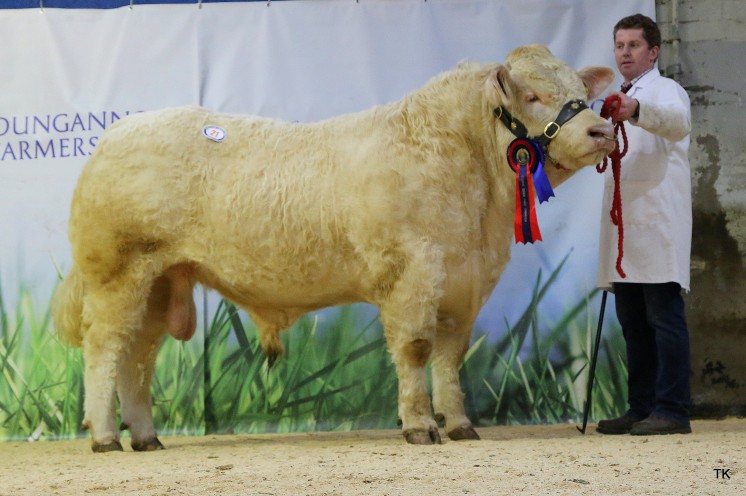 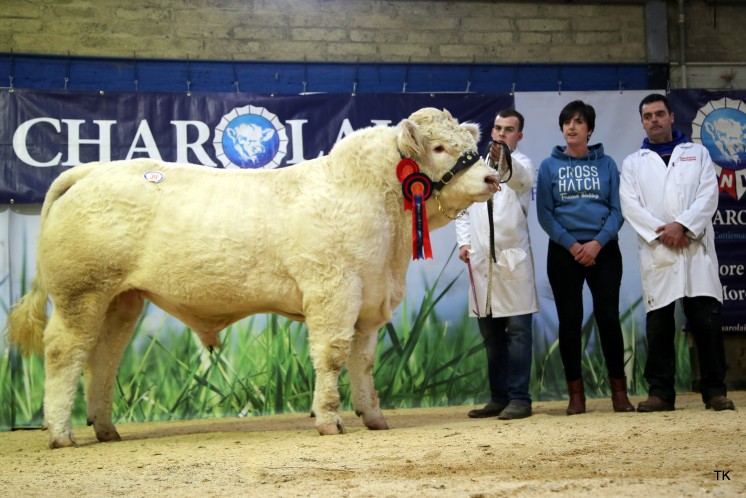 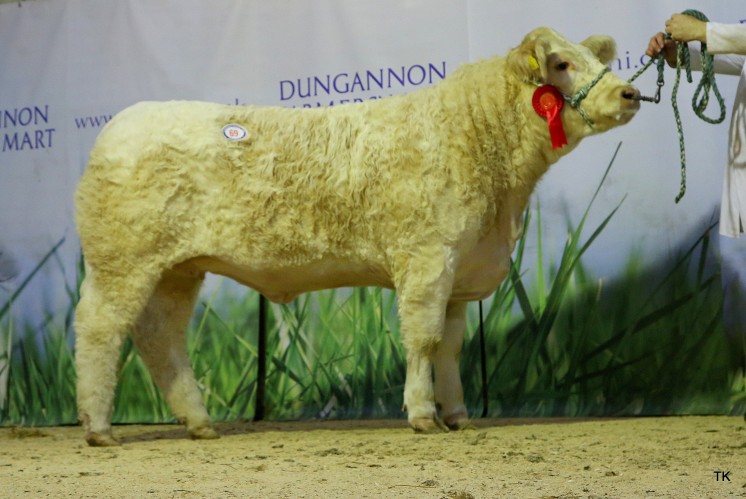 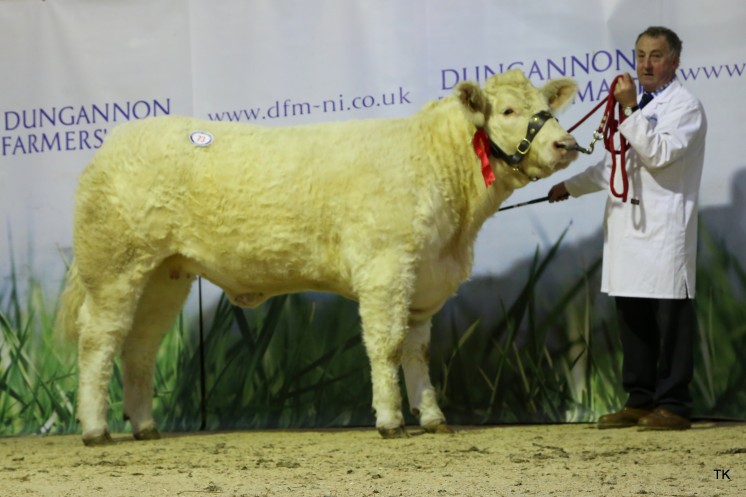