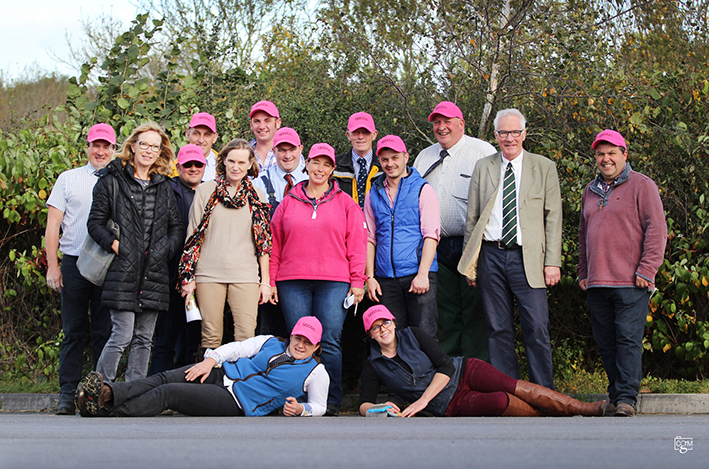 The Sedgemoor ring was filled to bursting for the dispersal of the Balbithan Charolais cattle and emotional goodbye to one of the breeds most renowned herds, on Thursday 12 October. The prices peaked at a sale centre record of 17,500gns and a new Charolais record average of £8550.65 for the 23 cows and calves sold, with cattle making their way to new homes in all four corners of the UK.

Andrew and Beth White established the Dorset based herd in 1987 with the purchase of just four females from the Warninglid and Cullum herds. In 1991 Herd manager Jane Haw joined the team and their combined passion has seen the herd become one of the most well-known in the country, securing numerous breed and interbreed titles including three Burke Trophy successes. The herd is most recognised for the powerful and graceful females who have dominated the show ring but its bulls have also shared the limelight, most notably Balbithan Vespasian who sold for 26,000gns at Perth in 2006 and who has gone to become a very successful sire for the Balthayock and Blelack herd, producing sons which have regularly featured at the Perth and Carlisle sales and have sold to 22,000gns. 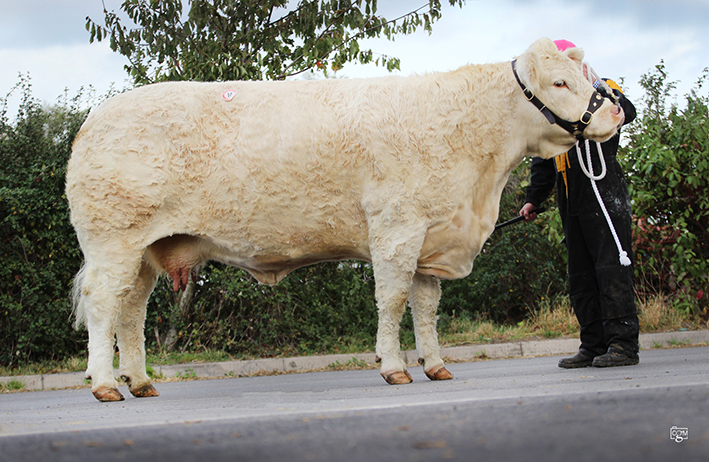 The day’s sale topper at 17,500gns was the seven year old and successful show cow Balbithan Faith, who counts amongst her many accolades the reserve supreme championship title at the Royal Cornwall Show, the reserve female championships at the Devon and Royal Three Counties Shows and red tickets at the Royal Bath and West and Royal Berkshire Shows. Faith who is sired by the 12,000gns Devon County Show male champion Newhouse Benson and is out of the homebred Balbithan Una who goes back to the 13,000gns Perth junior champion Simpsons Gregg, was accompanied by her April-born Goldies Eddy sired bull calf Balbithan Nelson. 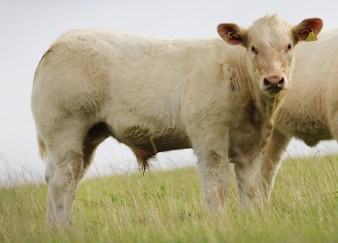 Faith’s has been a consistently good breeder with two of her previous calves having gone on to secure show successes themselves including her 2016-born son Balbithan Mercedes, who sold for 7,500gns at Carlisle in May after being awarded reserve male champion at the Royal Cornwall show last year. The pair were purchased by Mark Switsun, Dunvant, Glamorgan who also went on to secure the National Show class winning and Balthayock Hamish sired maiden heifer Balbithan Mowlem for 5,500gns. 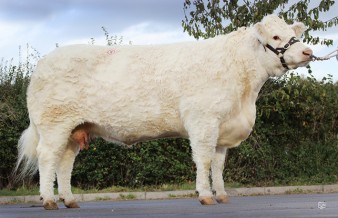 Next in the trade stakes was another of the Balbithan’s renowned show cows sold with her bull calf at foot. Balbithan Iona who has twice been crowned the Charolais National Show champion and secured a total of 10 interbreed titles including as part of the 2016 Burke Trophy championship pair, was knocked down at 15,000gns to a Devon breeder, who purchased a total of six lots. The 2013-born Iona’s breeding includes the 10,000gns Stirling senior champion Chunal Dougie and the home-bred 10,000gns Inverlochy Topsire sired Balbithan Dixie. She was sold with her five-month-old Goldies Eddy sired son, Balbithan Nairn. 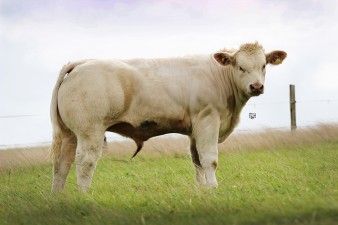 Two cow and calf outfits secured a total of 14,200gns and both were sold as split lots. The first was mother and son Balbithan Gilly and Balbithan Napoleon. Balbithan Gilly who is a full sister to the 26,000gns Balbithan Vespasian, is no stranger to the show-ring herself and has also bred show winning daughters. The 2001-born Gilly is sired by the aforementioned Chunal Dougie and is out of Balbithan Tilly, who is in-turn sired by Balthayock Nougat. She was purchased at the top cow price of 9,000gns by Jonathan Crawford, son of the late Gilbert Crawford and new custodian of the Coolnaslee herd in Maghera, Co Derry. Her February-born son Napoleon who secured a bid of 5,200gns and is sired by Balthayock Hamish is going back to Throop, Dorset with Jane’s son Ben Trim. 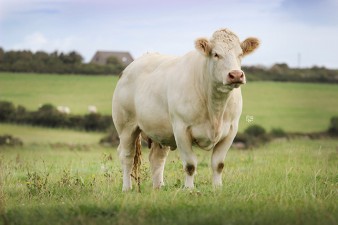 The other cow and calf outfit to fetch a total price of 14,200gns was the mother and daughter pair Balbithan Georgia and Balbithan Nabraska. The cow Georgia was purchased for 5,400gns by JJ McGuigan, who is also based in Maghera, Northern Ireland. She is sired by Chunal Dougie and is bred from notable line of female show winners, her dam Balbithan Arizona was awarded the reserve heifer championship at the Newbury show and her grand-dam Balbithan Nadia was a Royal Show supreme champion and reserve Burke Trophy winner. Completing the pair and securing the UK record price of 8,800gns for a seven-month-old female Charolais calf was Georgia’s daughter Nabraska. Thor Atkinson, Ulverston, Cumbria was the man with his hand in the air as the hammer went down on this Davally Illusion sired heifer.

Stock bulls were sold next, averaged £5103 for five and two bulls shared the top price of 6,000gns apiece. First up was the 23-month-old Goldies Lawson who was purchased by the Balbithan herd in May at Carlisle where he was awarded the intermediate and reserve male championships. He heads down to work in St Austell, Cornwall with David and Bernadette Stacey, is sired by Goldies Formidable and his dam Goldies Violin who goes back to Thrunton Trademark has bred bulls to 26,000gns.

JH Davies, Citrea, Abbergavenny purchased the other 6,000gns bull, the homebred Balbithan Mackenzie who is a February-2016-born son of the 11,500gns Loganbar Goran bred out of Balbithan Hyacinth, a Newhouse Benson daughter. Another show goer, he won his classes at this year’s Charolais National and Royal Welsh shows, was awarded the junior championship at the Royal Three Counties show and the male and reserve breed championships at the Royal Bath and West.

Leading the heifers at 9,500gns was another purchased on behalf of Ben Trim. The January-2015-born Balbithan Lupin is a daughter of Goldies Eddy and Balbithan Daisy and was the reserve breed champion at this year’s Royal Three Counties Show.

Minutes earlier, the two-year-old Balbithan Louisianna was knocked down with a bid of 7,500gns from the aforementioned Thor Atkinson who purchased a total of four. Louisianna is out of the above-named Balbithan Georgia, sired by Goldies Eddy and is due to calf in January to Wesley Furnish.