Wednesday 13 September sadly saw the dispersal of the Tutbury Charolais herd from Burton-upon-Trent, Staffordshire, due to a change in farming policy. The herd was established by JD Leavesley just two years ago when he purchased the majority of the Newroddige herd which was founded in 2004 with the purchase of five females. The herd has had numerous successes in the show ring including eight breed championships and three interbreed championships in their two seasons of showing. 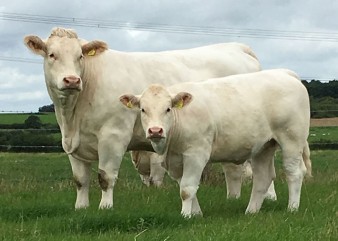 The sale topper at 7,200gns was a mother and daughter pair who sold as a split lot. Catching the eye of J Conn, Strabone, Co Tyrone, the February-2014-born Newroddige Jody who was recently crowned supreme champion at the Bakewell Show and awarded reserve supreme beef animal at the Staffordshire County Show in June. Jody is sired by the 30,000gns Balmyle Bollinger and out of Newroddige Delightful and goes back to the 18,000gns Derryharney Outstanding. She was accompanied by her nine-month-old heifer calf Tutbury Matilda who is sired by the French bred Unico SC who travels home to Ellon, Aberdeenshire with AJR Farms.

Next in the trade stakes was another pair, this time purchased as a set by MA and V Roberts, Botwnnog, Gwynedd. Dam Newroddige Jewfull is an April-2014-born daughter of the popular AI sire Alwent Goldbar and out of Newroddige Graceful who goes back to Maerdy Estyn. Her eight-month-old male calf Tutbry Navigator is another sired by Unico SC.

The very next lot sold for a combined price of 4,300gns, another mother and daughter pair who again went on to different homes. Newroddige Jazmin, a 2014 born daughter of sire Alwent Goldbar and dam Newroddige Chloe who is out of the Three Counties supreme champion Thrunton Versailles and sired by Oldstone Egbert, was purchased by AK Watkins, Kentchurch, Herefordshire. The afore mentioned AJR Farms of Aberdeenshire were the purchasers of her eight-month-old heifer calf Tutbury Noellla who is also sired by Unico SC.

Two pairs were sold for a total of 3,700gns a piece starting with the first lot of the day. Newroddige Isabelle and her September-born heifer calf Tutbury Marybelle were sold on to different homes. The 2013-born who Isabelle is sired by the 30,000gns Dingle Hofmeister and out of the 15,000gns Carlisle supreme champion Burradon Talisman daughter Newroddiige Aquila was purchased by BJ Mould, Dunston, Staffordshire, while her 10,000gns Esgob Ferrari sired calf Marybelle was snapped up by ER Hollingsworth, Middleton, Manchester.

The dam from second split pair to sell at 3,700gns was purchased by Mr P Weston, Ashbourne Derbyshire – Newroddige Farris, a 2010 born twin, sired by the 9,000gns Royal Show senior male champion Gretnahouse Archangel who sells served to the 12,000gns Elrick Legend. While Charlotte Boden, Bostock, Cheshire was the purchaser of her October-born heifer calf Tutbury Melissa, another sired by the French born Unico SC.

Following on at a combined price of 3,300gns, was the mother and daughter pair Newroddige Jessica and Tutbury Nikita. Jessica, an April-2014-born daughter of Alwent Goldbar and the Gretnahouse Archangel sired Newroddige Effie was purchased by DP and M Jones, Minsterley, Shropshire and the Unico SC sired Nikita went home with T Rich, Mold, Flintshire. 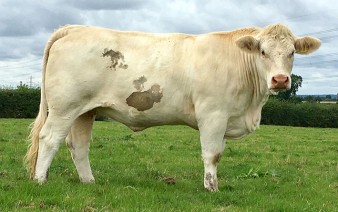 The heifers topped at 2,500gns and 2,100gns with two more purchases by AJR Farms. The January-2015-born Newroddige Linda was the highest priced and sold in calf to Balthayock Impression. She was shown in 2016 and crowned junior champion at the Ashby show and reserve breed champion at Bakewell and is sired by the 10,000gns Welshpool supreme champions Esgob Ferrari. The 20-month-old Tutbury Maisie, was AJR Farms final purchase at 2,100gns. Again, sired by Esgob Ferrari, she is out of Newrodige Finesse who goes back to Newroddige Banjo.