Charolais bulls met with a ready trade in Dungannon on Monday 1 May, topping at 5,200gns with a clearance rate of 93%, up 17% on the year for 2 more sold. Following the recent Charolais sales trend averages were also up by £360 to £3,182. 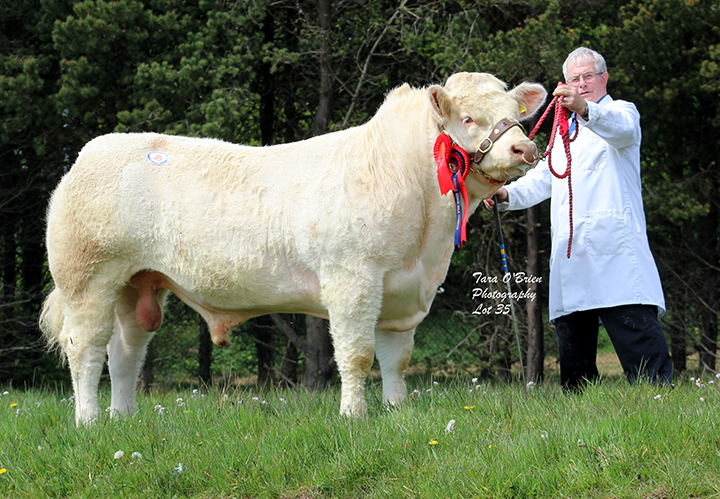 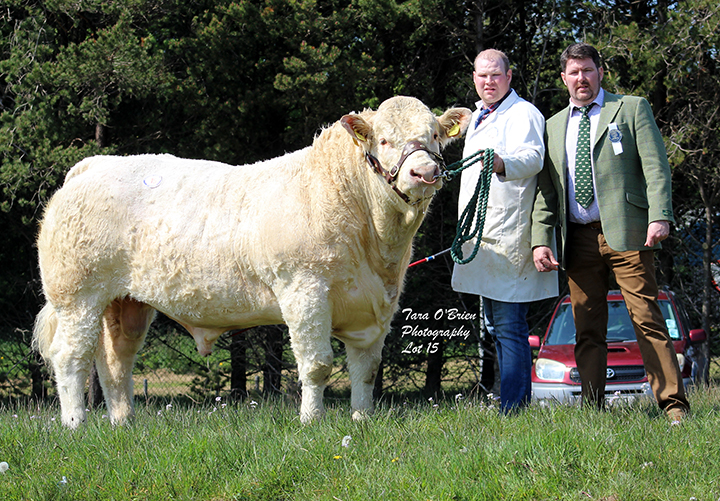 Next in the trade stakes was the November 2015-born Coolnaslee Largolf whose breeding includes the 12,000gns Maerdy Fiend and maternal grandsire the 55,000gns Balmoral interbreed champion Sportsmans Columbo. Largolf who commanded a 4,900gns bid from Norman Johnston, Enniskillen, Co Fermanagh had been awarded a yellow ticket earlier in the day for breeder Gilbert Crawford, Maghera, Co Derry. 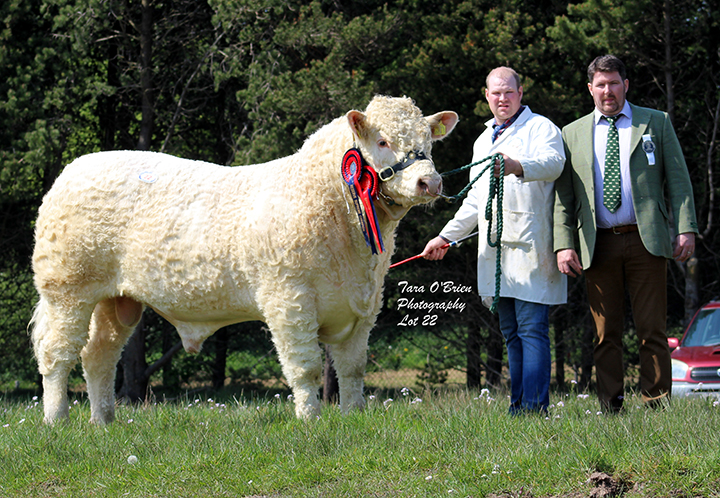 Mr Crawford went on to secure the reserve supreme and male championships with his 15-month old entry Coolnaslee Master who is no stranger to the show ring having secured the Pedigree Calf Fair reserve junior championship back in November. The 22,000gns Newhouse Bigal is the sire here and the home-bred dam again goes back to Columbo. Stephen McGuinness, Greysteel, Co Derry were the purchasers at 4,600gns. 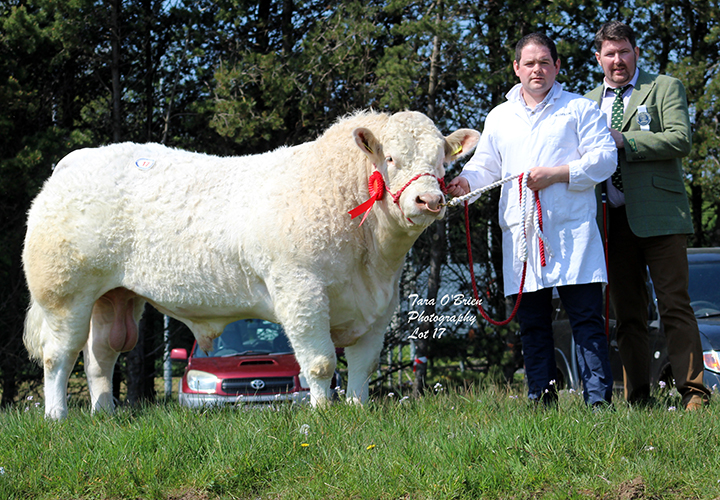 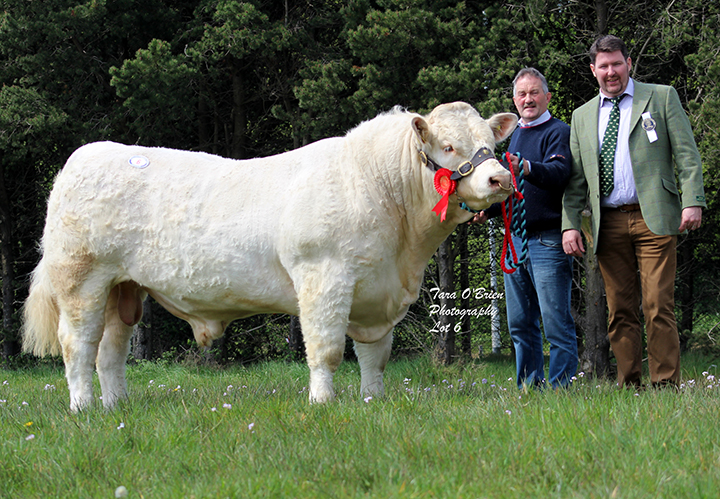 Another class winner this time from breeder Kenneth Veitch, Lisbellaw, Co Fermanagh realised the next highest bid of 4,000gns and the man with his hand in the air as the hammer went down on this one was Eric J Connor, Maghera, Co Derry. The 18-month old Drumlone Lindsman is a son of the French AI sire Plexus and the homebred Drumlone Hilary.

The next top priced at 3,800gns and purchased by HP Nugent, Toomebridge, Co Antrim was the 18,000gns Thrunton Fairfax son Royaldowns Legend, a December-2015 born entry from Mervyn McKeown, Downpatrick, Co Down.

Next and selling for a price tag of 3,300gns, J, MN and SP Bradley, Plumbridge, Co Tyrone offered their 15-month old Slievemore Mugsy. The 18,000gns Perth intermediate champion Fury Action sired this lad who was snapped up by Seamus McMullan, Bellaghy, Co Derry.

Just two lots later Harold Stubbs and Alan Burleigh, Crummy, Co Fermanagh sold their Minsups reserve junior bull champion Derryharney Major. The January-2016 born Major who is sired by Allanfauld Vagabond and out of Derryharney Dancer who goes back to the 13,000gns Perth junior champion Simpsons Gregg, caught the eye of Andrew Millar, Antrim, when he was placed second in his class at the pre-sale show.

Matching the 3,100gns price tag was the February-2016 born Kiltybane Misterlucky sired by Doonally Nicefor and out of the home-bred Kiltybane Icity. Desmond Rafferty, Carrickmore, Co Tyrone bought this one from breeders and exhibitors Seamus & Aiden Bellew, Cullyhanna, Co Down.

The third lot to sell for 3,100gns was a 14-month old entry from William and Margaret Nelson, Rosslea, Co Fermanagh. The 22,000gns Newhouse Bigal sired Drumacritten Mark journeys on to work at Randalstown, Co Antrim with Brian Smyth. 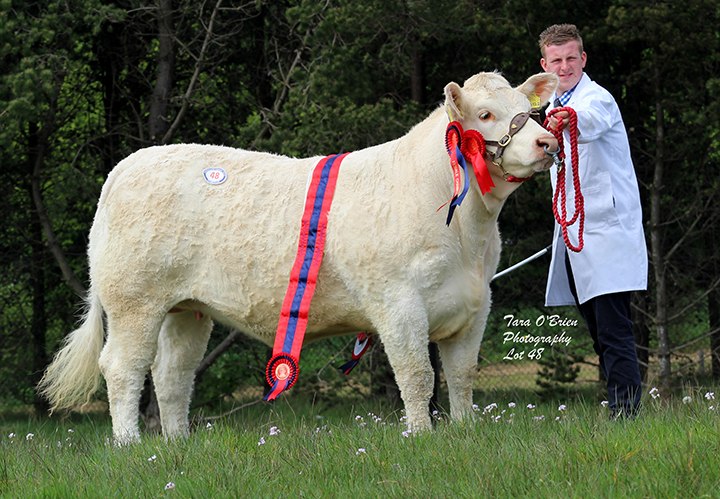 The female lots were topped by an entry from Harold Stubbs and grandson Alan Burleigh of Crummy, Co Fermanagh who earlier in the day were awarded the supreme and female championship for their 15-month old Doonally New daughter Derryharney Moonlight who was snapped up by H and H Heron, Newtownards, Co Down for 3,300gns.

The Heron family were in a buying mood and went on to purchase the reserve female champion Killadeas Lottie, an August-2015 born lass sired by easy calving Blelack Digger from breeders and exhibitors Stuart and David Bothwell, Ballina Mallard, Co Fermagh.

Balmoral Show » « Charolais clearance rates and averages up at Stirling