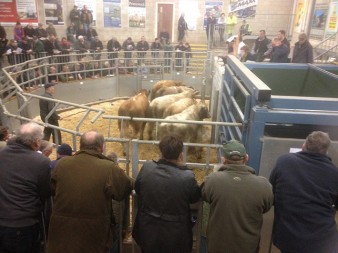 The fallacy that Charolais bred cattle cannot meet the current supermarket requirements has been well and truly exposed by the price and demand for Charolais calves and store cattle at the autumn round of suckled calf and store sales.

This is what the auctioneers had to say in Friday’s edition of the Scottish Farmer:
Alan Hutcheon – Cattle Auctioneer at Aberdeen and Northern Marts Thainstone Centre “The good news is that there is still a big demand for Charolais cross calves, which instead of being sold at the heavier weights of the past are now being cashed at lighter weights”. This was a point echoed by John Roberts, cattle auctioneer at United Auctions, Stirling. “Buyers still want Charolais cross calves because they are quicker to finish and the professional finishers will always seek out such cattle because they know they’ll get them away quicker by altering the finishing rations accordingly”. This fact was substantiated by Tom Wrench, Auctioneer at Rugby Farmers Mart who stated “there is a £100 premium for Charolais bred stores when taking the age of the cattle into consideration and up to £150 premium for Charolais bred calves under one year old”.