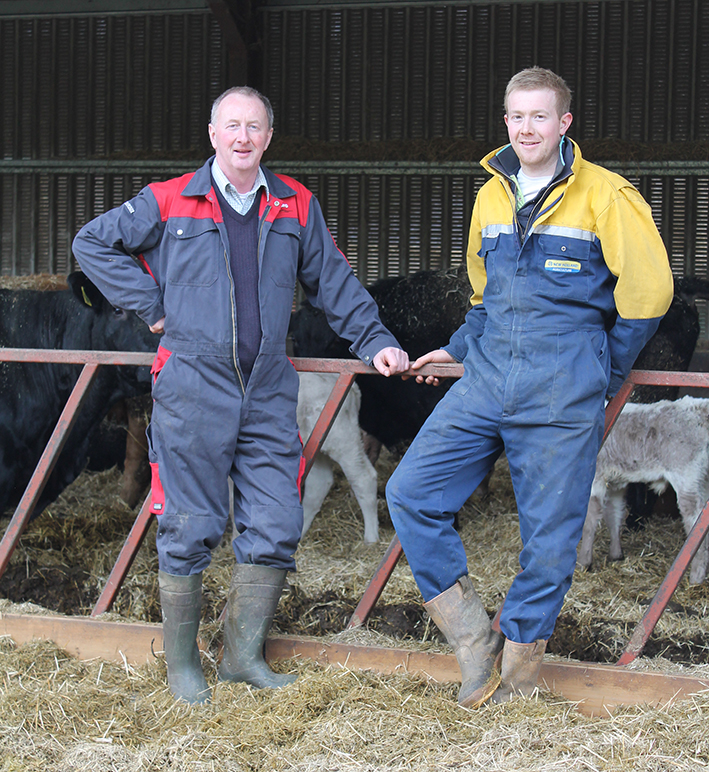 The Charolais is still the number one choice for the Aberdeenshire store ring and for over 20 years, John Gordon, Wellheads has been selling Charolais cross yearling stores at a premium. With a reputation for well framed stores, there is a ready market for his stock.

Wellheads, Huntly is one of the best known upland stock farms in the North-east of Scotland. The farm’s reputation for producing quality sheep and cattle made it a key attraction as host of Scotsheep in 2006 and Wellheads regularly hosts visits from farmers from home and abroad.

Calves born in the spring of 2015 were sold on February 19 at Thainstone Centre, Inverurie where a pen of seven steers secured the top price, realising 284p/kg, with steers averaging 440kg and heifers 420kg.

“Our feedback from buyers is the fact that they have been coming back for a number of years to buy our stores. We did have one buyer who didn’t get this year because they were too expensive, a reflection of the demand for this type of cattle.

My market is the store cattle buyer at Thainstone, who is looking for cattle, well grown for their age and carrying a moderate bit of condition ready to move on to more  concentrated cereal feed for the finisher to put flesh on them, taking them to 700kg liveweight or 400kg deadweight.

The Charolais breed is ideally suited as you can get them to a good weight for age at a year old.” says John who for a number of years now has been achieving his target weights of 440kg for steers and 420kg for heifers.

In comparison to some other breeds, the Charolais will maximise its potential at a younger age and heifers at Wellheads have been fed separately from steers for a number of years. Diets are  home-mixed using pit silage, Prograin-treated bruised barley, draff and a mineralised protein concentrate, Rumitech 35 + Yea-Sacc with a 16% protein ration for growing heifers and 14% protein ration for growing steers.

This flexible system, using home-grown materials and draff from local distilleries allows diets to be adjusted easily to suit the gender, age and weight.

David Mackenzie, Harbro who formulates the diets for Wellheads, advocates the use of a low starch creep feed for calves to avoid early deposition of fat and that yearlings should be fed a reasonably high level of protein, to promote frame development and lean growth.

“This higher protein and lower starch level is particularly important for heifers who are predisposed to laying down fat. This facilitates the development of a good, strong frame, ready for fleshing out. ” says David Mackenzie.

Bearing in mind the recent weight restrictions imposed by beef processors, the combination of the Charolais’ growth potential with the Wellheads’ Limousin cross cows, produces an  animal that can easily be finished to the desired weight, with muscle in all the right places and desired correct fat cover.

“These cows are predominantly ¾ Limousin crosses and with the growth of the Charolais, produces an animal which will mature at 700kg. The first Charolais came to Wellheads in 1971 and we have been using them ever since.” says John.

Not producing an excessively large animal is also dependent on cow size with the average cow at Wellheads weighing in at 680kg. These cows are better suited for the job, are nicely shaped, without being too extreme or muscly, and are ‘more easily kept’, i.e. eating less than a 750kg cow.

John is careful where he buys his replacement heifers, purchasing them locally from BVD accredited herds, to maintain his own herd health which is also accredited for BVD.

“There is the perception that using a Charolais bull can lead to difficulties in calving but I believe that it is down to cow management, having them fit, not fat. It is also down to careful bull selection, matching the bull’s growth potential to the cow size. I’m not buying an extreme bull, but selecting one that is well shaped and fleshy.”

John has a number of Charolais bulls including sires from Elrick, Blelack and Kinclune. When selecting new bloodlines, he pays attention to the calving figures stating that he doesn’t mind calving a few cows but he is looking for sensible mid-range figures.

Along with genetics and nutrition, management is equally important to maximise performance.

John’s starting point for managing the herd is at the point of weaning, taking the opportunity to get cow condition right, either to add a bit of condition or to thin them down a bit.

The autumn calvers (120) are weaned on August 1 and moved onto bare pasture with access to straw and Harbro Super Suckler SEC buckets. As they move closer to calving, cows are moved onto a straw diet and taken inside to ease management.

Bulling starts on November 10 by which time, the cows will have been housed for a few days and are fed on a TMR of silage, draff, straw, Prograin treated barley and minerals. From that point, calves have access to Beefstock from a creep feeder.

At the end of bulling which runs for nine weeks, cows and calves are moved from the straw courts to slats until they are turned out to grass in mid-May.

Earlier calving, fitter cows are turned out until the weather turns poor. The outside cows can afford to lose a bit of condition to get them in a better state for calving. Leaner and older cows are kept inside and looked after a bit better to hold their condition.

Weaned calves are split and are fed on a TMR of straw, silage, draff, Prograin treated barley and Rumitech 35 + Yea-Sacc.

In the period up to the end of December, steers are fed 3kg bruised barley per head per day with heifers receiving 2kg per head per day, with the diet being adjusted as the cattle grow.

“Over the last 20 years, we have made no major changes to what we do, more fine-tuning of nutrition, bull selection and cow management because there is always something you can learn; every day is a school day.

We are acutely aware of ‘Eurocracy’ and farm support and the worry it is to every business but we are constantly looking at ways to improve our system.

The Charolais has done us well over the last 20 to 30 years and I’m sure will continue to do so in the future.”

Fourth generation of Gordon family since 1879 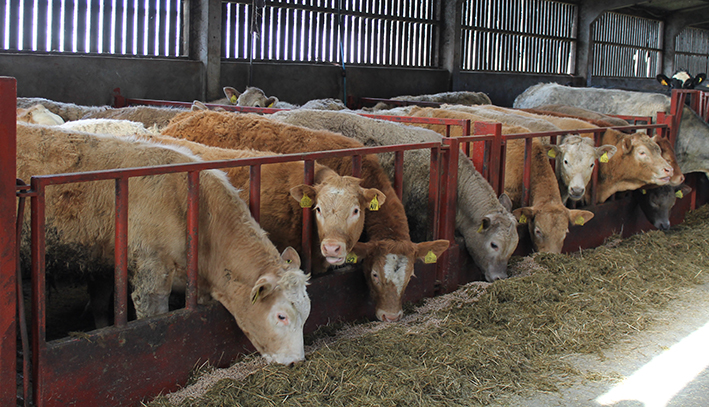 Charolais to 9,000gns at Welshpool » « Much Improved Charolais Sale at Holsworthy