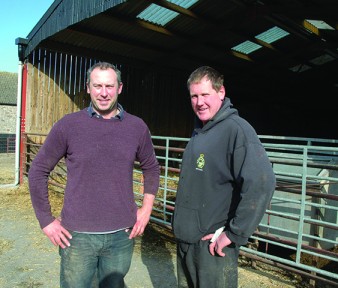 Making a simple change of terminal sire and introducing Charolais is making a significant contribution towards improving output from a portion of the Davies family’s suckler herd.

Charolais cross bulls compared with the unit’s other Continental cross bulls finished one month earlier making feed cost savings of £45 a head; they weighing an average 8% heavier consequently their sale value was £110 a head higher.

The Charolais cross heifers achieved target finishing weights 2.76 months earlier than the remainder and subsequently achieved feed cost savings of approximately £120 a head. These heifers also killed out in a higher specification.

The bulls were group housed and fed the same diet – see figure 2, similarly the crop of heifers was run as one group.

“Our objective is to maximise output per cow and produce the best possible finished animal in the easiest to manage system,” Phil explains. “We thought we could push the herd a bit more and aware of Charolais and its ability to leave animals with better weight for age, in 2012 we decided to invest in a bull. He was fresh blood and we thought he would suit our Continental cross cows – those we didn’t need for breeding replacements.

“This bull soon proved his worth, so the following year we secured a second Charolais bull. Both were selected for shape, they were not too heavily boned and most importantly they hadn’t been stuffed, they were naturally reared.”

Beef rearing and finishing is complementary to Upper Court’s arable enterprise. “We have a certain amount of land which we cannot use for anything but grazing, we are not fans of sheep, the beef muck is complimentary and we are prepared to take the volatile beef market in our stride,” Tom explains. “We are resigned to living with TB, consequently we run a closed herd and finish the entire crop of calves. We achieve a huge degree of self-sufficiency using home grown cereals, forage and straw.

“We are focused on getting the most out of each animal, and are also keen to implement the latest tools, information and advice along with better genetics, nutrition and management. For example, we are improving our grazing by introducing a reseeding programme with modern varieties in a seven to 10 year rotation.”

The Davies introduced independent nutritionist, David Hendy to formulate new diets which have helped to considerably step up performance – a home mix creep fed to the spring born calves from 16 weeks of age through to housing in early November; a bull finishing diet and a third diet fed in the final 10 to 12 weeks of finishing to the heifers.

Mr Hendy explains the critical point with the calf creep and bull beef cereal mixes is to maximise digestible fibre levels whilst capitalizing on performance and intake and therefore feed conversion ratio, (FCR). Optimum daily intake and the very positive FCRs have been ensured by Neutral Detergent Fibre (NDF) being as close or over 20% and including high fibre feeds such as whole oats in the calf mix and an appropriate balance of barley and wheat in the bull mix, and with up to 5% inclusion of molasses.

Tom says: “We believe in growing the calves as fast as we can pre weaning because that’s when their feed conversion is at its best – it’s the cheapest time to feed them. That’s why the creep diet is really important.

“Following on, we were struggling to get the bulls to target weight and with enough cover within 16 months whilst feeding a traditional forage based TMR, whereas nowadays, since introducing a cereal based diet formulated to specific specification, they are finishing to target weight at 14 months. The new regime is proving to be much more cost effective. We’re also tweaking the diet to ensure the bulls finish within ABP’s maximum 420kg deadweight to avoid penalties.

“The heifers continue to be housed throughout the finishing period; feeding a homegrown forage TMR is proving to be the most cost effective and efficient.”

Tom adds: “We will shortly be introducing a crush with weigh scales which together with EID will provide us with an opportunity to regularly record each animal, identify any slack in the system and fine tune accordingly.” 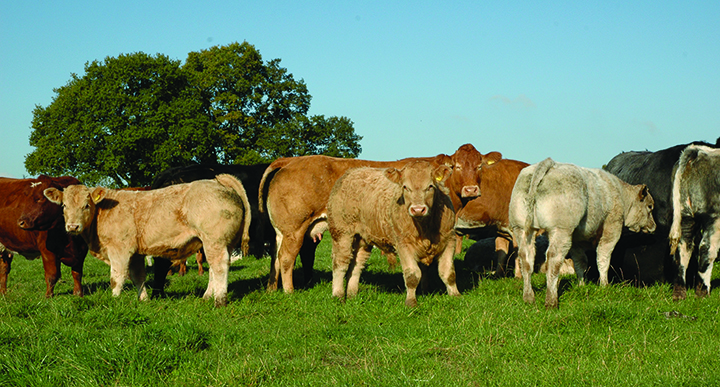