Maerdy genetics from one of the principal Welsh Charolais herds are predicted to be in high demand when the entire portion of two/ three year old heifers come under the hammer at Carlisle on Friday 20 November. The production sale will comprise 64 heifers. 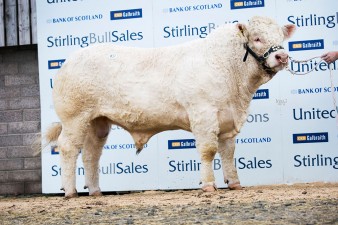 The Maerdy herd, owned and bred by Esmor Evans of Mold, Flintshire, now runs at 160 cows after being established in 1974. Esmor said: “We chose to develop a herd of Charolais as its was and still is the dominant beef breed – offering the best growth rates for age and a carcass to suit commercial purposes.”

The sale offers breeders an unrivalled opportunity to add leading dam lines to their herds, as Esmor explained: “As our main cattleman has left us, we’ve made the decision to reduce the number of breeding females and having a complete and genuine sale of all two to three year old heifers seemed the most honest way to go about it. We have been very selective over the years and would happily breed from any of the heifers on offer. They have not been pushed due to the short notice of the sale but will be all the better for that for the prospective buyers.”

Maerdy is well known across the UK with an outstanding pedigree in both the show and sale rings. “For me the highlight has to be setting a new breed record price of 56,000gns for Maerdy Director in 1989 at Perth bull sales, a record that stood for over 20 years. That was a huge amount of money at the time and I was very proud to maintain that record for so long.” Maerdy genetics continue to be in demand with the 17 month old Maerdy Jerusalem TI+73 SRI +72 realising 28,000gns at last month’s Stirling bull sales. Esmor continued: “In the show ring we’ve been lucky enough to win interbreeds at the Royal Show and Royal Welsh Show, as well as many other breed and interbreed titles nationwide including nine Perth and Stirling champions starting with Maerdy Victorious in 1985.”