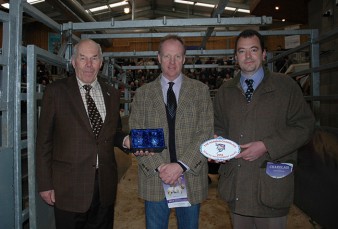 Alasdair Houston’s Gretna Green, Dumfriesshire based Gretnahouse Charolais herd has been recognised with the Harman Charolais Genetic Improvement Award 2014 for making the greatest genetic progress both in Scotland and within the entire British Charolais Herdbook during the last 12 months.

Herd progress was measured by the highest improvement in the Self Replacing Index (SRI) for the calves born in 2012, and recorded over the 2012/2013 recording years. During that period, the 60 cow Gretnahouse herd SRI increased by +16.2 to an average SRI +54.2.

“I’m delighted to receive this award,” Alastair comments. “We have all seen a lot of debate over recent months on the subject of EBVs. My position is simple, relying blindly on EBVs would be as daft as relying blindly on the satnav whilst driving off a cliff – it doesn’t always get it right. We select using a combination of eye and knowledge of pedigrees. However, science does have a valuable role to play in modern beef breeding, it always has, and in my herd I find that EBVs are a useful tool; we would be nuts not to use them. Wesley Equinox who is within the breed’s top 5% for both Calving Ease Direct and Gestation Length EBVs, is our main herd sire, he is doing a fantastic job at Gretnahouse and is responsible for a large part of the improvement in our herd’s figures. Equinox’s progeny reflect his EBV data in that they are proving to be very easy calving with short gestation and good growth performance. That’s what modern British Charolais is all about.”

Ben Harman commented: “The winners of this year’s awards have once again embraced the demand from our customers – suckled calf producers, for cattle that the Breedplan tool kit enables us to identify. They are breeding bulls which deliver progeny that are easier to calve combined with unbeatable growth potential – the breed’s hallmark trait sought after by the finishers who are receiving their just rewards for Charolais cross cattle. Steers for example, are currently averaging £125 a head over all other breeds according to recent analysis.”