Charolais secured the supreme championship and picked up a fistful of red tickets at Premier Meat Exhibition’s carcase awards staged at Scotbeef on Saturday 23 November and organised by the Scottish National Fat Stock Club. 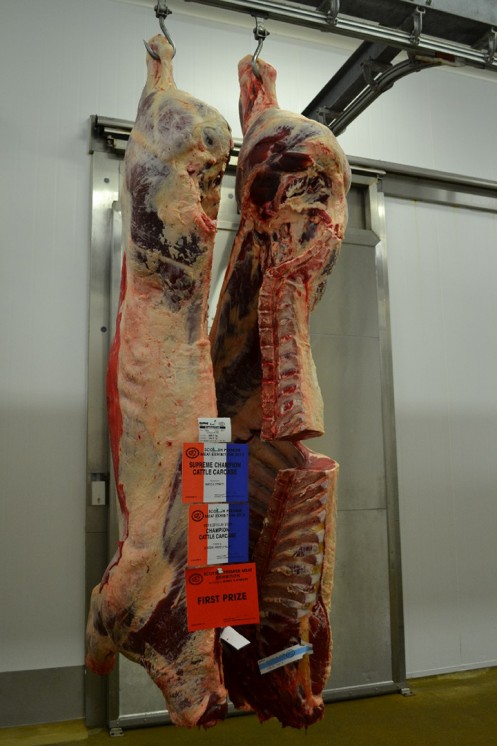 The winning carcase was a Charolais cross heifer from Wilson Peters, Crieff. She weighed in at 384kg, graded U +4L and killed out at 63.5%.

The popular Young Livestock Producers (YLP) classes were cleaned up by Charolais cross entries. The overall champion was a Charolais cross steer from Isla King, Crossrigg, Hutton with an entry kiling out at 415.8kg, U +3 and 65.2%.

The YLP entry awarded the Premio Speciale Italiani prize for the carcase best suited to the Italian market went to James Young, Girvan Mains with his Charolais cross heifer killing out at 360.9kg, U +3 and 63.8%

Heading one of the heifer classes was a Charolais cross killing out at 402kg, –U 4L and 62.1 KO% from James Hunter, Luckenburn.

Earlier in the week the cattle had been judged in the ring at Caledonian Marts, Stirling. John Thompson, Smallburn, Longhorsley headed a heifer class with a Charolais cross which went on to kill out at 389.2kg, U+3 and 65.1%, whilst the best beef bred prime cow award went to a Charolais cross from Emslie Partners, Little Barras, Laurencekirk. She killed out at 531kg, E3 and 62.8%.