Charolais met a solid demand with the top 6,100gns bid going to a heifer while bulls peaked at 4,700gns in Dungannon on Friday 1 November at the breed’s NI Club show and sale.

“The day’s trends echo the fact that Charolais remains the top terminal beef sire in NI, as commercial men continue to witness the higher values and faster growth of Charolais cross cattle than any other breed, combined with modern British Charolais improved calving genetics. Premiums achieved at this autumn’s sales of store and suckled calves reflect just that,” commented the society’s David Benson. 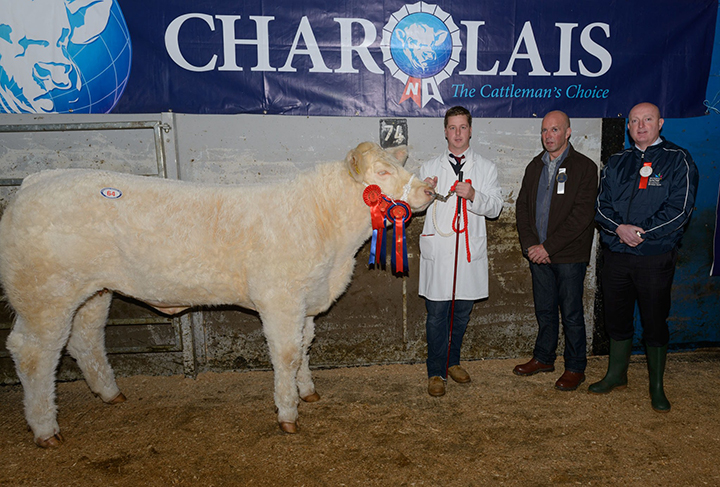 Sale leader at 6,100gns was Corrick Honey TI +26, SRI +25, a 19 month old heifer by the 55,000gns Thrunton Voldemort and out of a Coolnaslee bred dam. Bred and exhibited by Cecil McIlwaine, Newtownstewart, Tyrone, she was awarded the overall supreme and champion female titles before selling to Robin and Agnes Todd, Banbridge, Co Down. 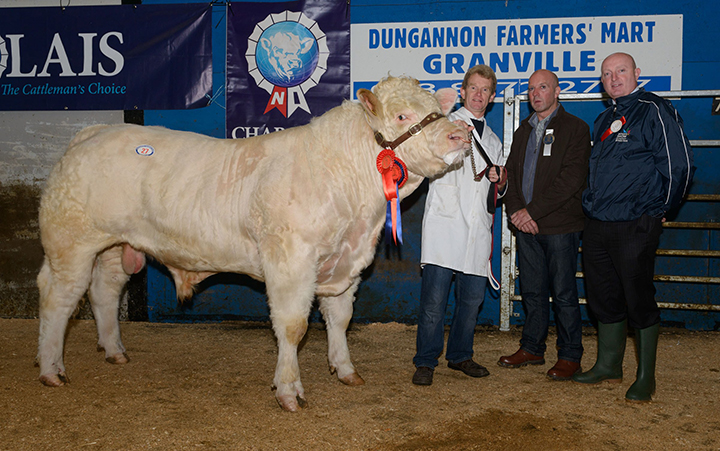 Heading the bulls at 4,700gns was the junior male champion, Parkview Hustler from Stephen Heenan, Downpatrick, Down to an auctioneers client. An 18 month old by the 55,000gns Sportsmans Columbo, he was out of a homebred dam going back to Doonally New. 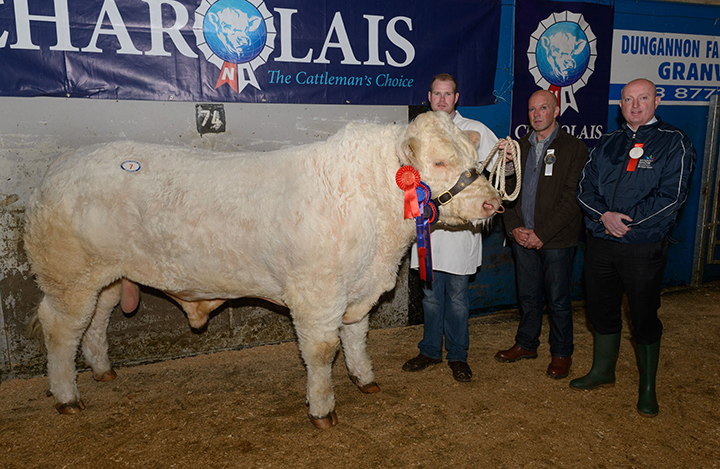 A bid of 4,000gns secured the 19 month old Bushmills Harley for Eric Lindsay, Strabane, Tyrone. Bred and exhibited by Victor Chestnutt, Bushmills, Antrim, he was by Lissadoair Eden, out of a homebred dam and earlier in the day was awarded the male championship. The same vendor offered Bushmills Houdini, another 19 month old Eden son and out of a homebred dam for 3,400gns to WE Burrows, Ballynahinch. 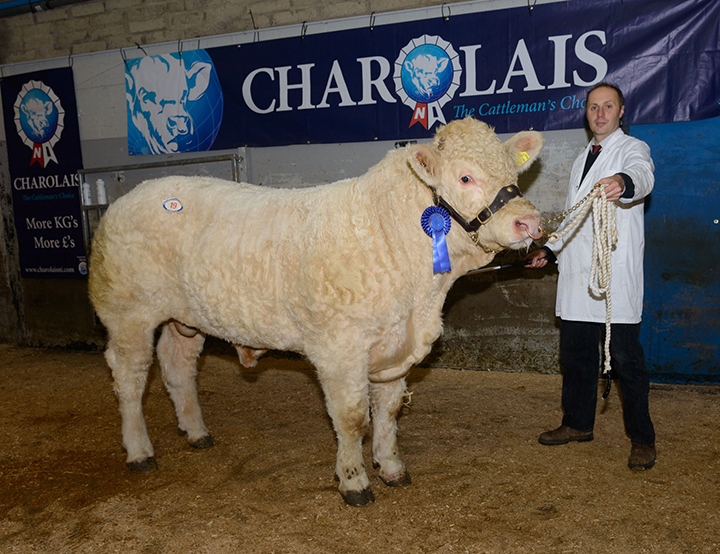 Three entries shared a 3,800gns bid. First to go was Altnaveigh Hawkwing, a 19 month old from S and R Thompson, Newry, County Down to John McBride, Plumbridge, Tyrone. Sired by Thrunton Voldemort, he was out of a homebred dam by the 25,000gns Maerdy Impeccable. Another 19 month old from the Thompsons, this time Altnaveigh Harbour by Bova Sylvain made 2,900gns to J Kelly, Downpatrick,Co Down. 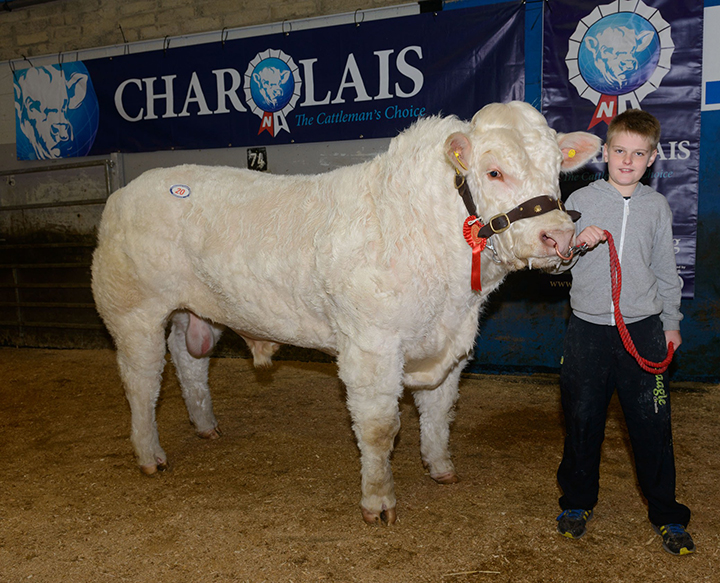 Rossavalley Hill, the next entry in the ring sold for 3,800gns to Owen McDevitt, Limavady, Derry. Bred and exhibited by P Quigley, Enniskillen, Fermanagh, the first prize Hill was an 18 month old by Sportsmans Columbo and out of a Devenish bred dam. 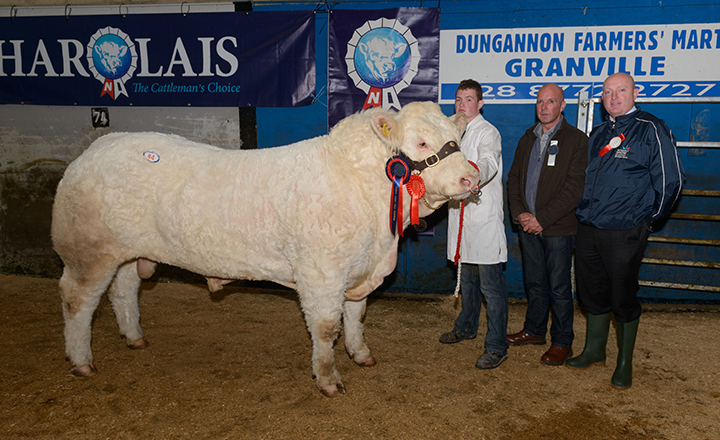 The final 3,8000gns call was made by Edward Martin, Downpatrick, Co Down for Ballyoak Hercules TI +24, SRI +29, a first prize 15 month old Burradon Talisman son, and out of a Killadeas dam from S and A McKenna, Clogher, Tyrone.

John Erskine, Killylea, Armagh offered his highest entry at 3,500gns to Noel Rutherford, Hillsborough, Co Down. The 18 month old Dartonhall Harvey was by Corrie Alan and out of a homebred dam by the 25,000gns Goldies Unbeatable.

The day’s second 3,500gns call was made by Cyril Brown, Newtownbutler, Fermanagh for Corcreevy Hamlet, a 16 month old by the 30,000gns Balmyle Bollinger and out of a Balmyle bred dam from Desmond Orr, Fivemiletown, Tyrone.

A bid of 3,200gns secured Innisrush Harry from J Whyte and Sons, Portglenone, Antrim to James MacArthur, Limavady. A 21 month old, he was by the 22,000gns Balthayock Diplomat and out of a Balmyle bred dam going back to Dingle Hofmeister.

Kilgort Hercules, a 16 month old by Tonaghmore Augusto and out of a Toberlane bred dam from A O’Kane, Ballykelly, Derry made 3,200gns to Adrian Richardson, Lisnaskea, Fermanagh. 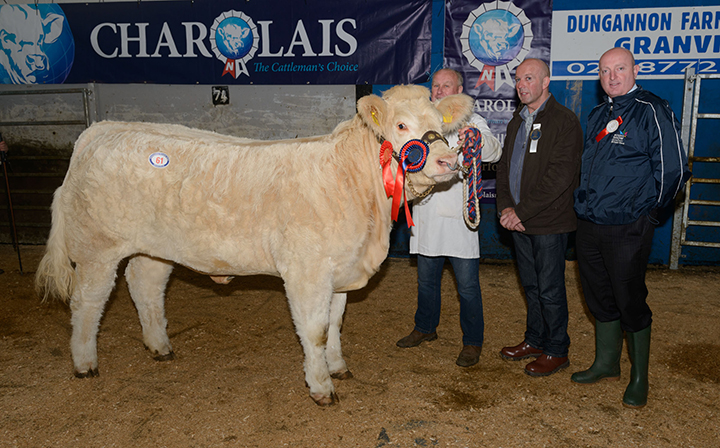 In the female section, Mr Veitch’s 20 month old heifer, Drumlone Helga TI +31, SRI +29 attracted the second highest call of 3,300gns from C and V Boyd, Drumquin, Tyrone. An Anneskeagh Sandman daughter and out of a Thrunton bred dam, earlier in the day she secured the reserve female title.

Last in the catalogue but not least was Palace Helena, a 15 month old maiden from Malachy Connolly, Ballynahinch, Down at 3,200gns to FG McGarrigle, Belleek, Fermanagh. A Doon Ultimate daughter, she was out of a homebred dam by Fury Action.

Two year old twin heifers by Sportsmans Columbo and out of a homebred Moorlough dam going back to Derryharney Outstanding were in the money for James McBride, Strabane, Tyrone. First to go was Moorlough Grace TI +25, SRI +27 at 2,700gns to Niall Daly, Omagh, Tyrone followed by Moorlough Gorgie TI +29, SRI +32 at 2,500gns to Owen Kerrigan, Donemana, Tyrone.

A second 2,500gns call was made by Andrew Hillan, Broughshane, Antrim for Lisnadill Hettie, a 17 month old Thrunton Unstopable daughter and out of a homebred dam from George King, Lisnadill, Armagh. 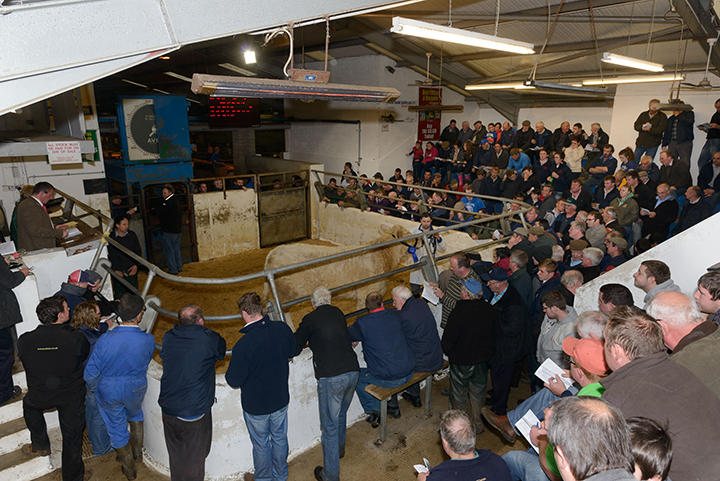