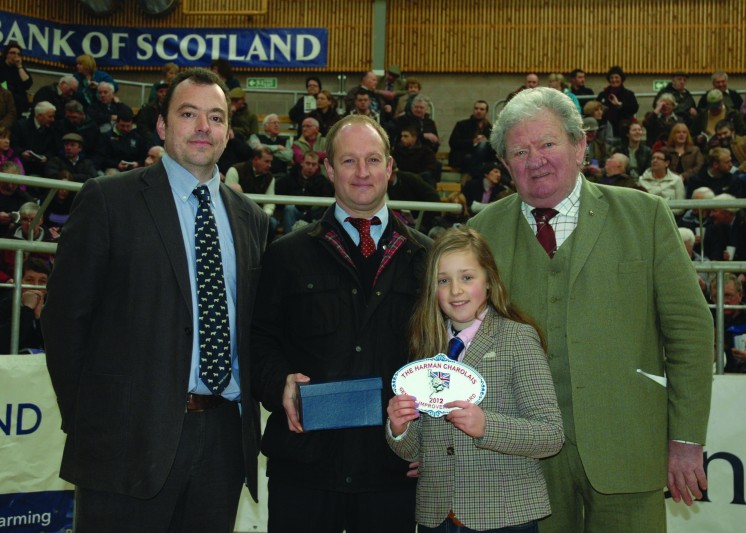 Herefordshire based Charolais breeder, Jeremy Price, of Staunton-on-Wye, has been recognised for his 15 cow Oakchurch pedigree herd making the greatest genetic progress in England and overall winner across the United Kingdom during the last 12 months with the Harman Charolais Genetic Improvement Award 2013.

Herd progress was measured by the greatest improvement in the Self Replacing Index (SRI) for the calves born in 2011, and recorded over the 2011/2012 recording years. All Breedplan recording society members with a minimum recorded 10 calves were eligible to enter. During the 12 months, the Oakchurch herd SRI has increased from an average SRI +29.9 to SRI +61.

“I’m really pleased to win this award not only for England but overall. The reason for such a massive leap in our herd’s genetic improvement lies solely in our stock bull Blelack Digger, who is leaving lively calves on the ground with a shorter gestation length, require no assistance at calving and have an exceptional daily liveweight gain.” Jeremy continued: “As a herd that is aimed at producing high quality pedigree bulls which meet with the demands of both breeders and commercial producers alike, we’re thrilled with the impact Digger has had on his progeny and look forward to seeing the continued effects of his influence on overall herd SRI.” Purchased in 2006, Blelack Digger TI +93, SRI +87 is one of the highest pointed British Charolais bulls in the herd book with an exceptional calving ease estimated breeding value (EBV) of +20.4.

Ben Harman commented: “The winners of this year’s awards have embraced the demand from our customers – the suckled calf producers – for the cattle that the Breedplan tool kit enables us to identify. They are breeding bulls that deliver progeny that are easier to calve combined with unimpeached growth potential – the breed’s hallmark trait cherished by the finishers. The result – Charolais cross cattle are rewarded by premiums, an average £125 a head over all other breeds according to recent analysis.”