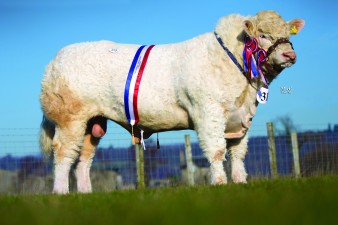 Charolais bulls met an exceptional demand driven by the commercial sector in Stirling on Tuesday 19 February where an electric atmosphere prevailed throughout at the breed’s official spring sale. Bidding peaked at 28,000gns, 27 lots traded at five figure sums and 174 lots sold to average £6,948, a figure representing 81% clearance leaving Charolais to once again take the lead at the spring multi-beef breed sales and grossing over £1.2 million in total. A further 11 lots were later sold via the auctioneers outside the ring bringing the total clearance to 86%.

“The day’s consistent trade firmly reflected breeders’ ability to offer modern British Charolais bulls that meet with commercial producers two main requirements – they’re leaving progeny with a shorter gestation that are more easily calved and without sacrificing growth and eye muscle area,” commented society chairman, Alasdair Houston after the five hour stint. “It’s been a tough 12 months for livestock farmers, and when times are hard, these commercial men are fully aware that Charolais calves are commanding premiums in the store ring, and an increasing number are seeking a slice of that action.”

Veteran breeder, James Jeffrey, Kersknowe added: “This fixture resulted in the strongest commercial trade I’ve even seen in 40 years, a trend that truly reflects the marketplace and demand for cost efficient performing cattle.”

Sale leader at 28,000gns was Elgin Glenlivet TI +53, SRI +52, a 22 month old by the homebred Elgin Davinci who goes back to Harestone Tyrol and out of Corrie Debbie, a member of their 50 cow herd. Bred and exhibited by the Milne family Roy and Kirsty and their sons James, Matthew and Sam, Lhanbryde, Elgin, he was secured in a three way split between Drew and Bob Adam, Newhouse of Glamis, Forfar. Bill Bruce, Balmyle, Meigle and David and Nick Walter, Balthayock, Perth to run over a combined 150 cows between the three herds. “We each thought Glenlivet to be the best bull in the market by a mile with size, correctness, breeding and figures to match,” commented Bob Adam.

Twenty four hours earlier, judge Charlie Boden had awarded Glenlivet the senior and overall supreme championships. “Quite simply Glenlivet stood out from the rest. He was a good upstanding bull, he was good through the middle, with a good loin, a good back end, good locomotion and great presence as soon as he came in to the ring,” said Mr Boden after the five hour stint and finding ‘ tremendous consistency all the way through the 21 classes’. 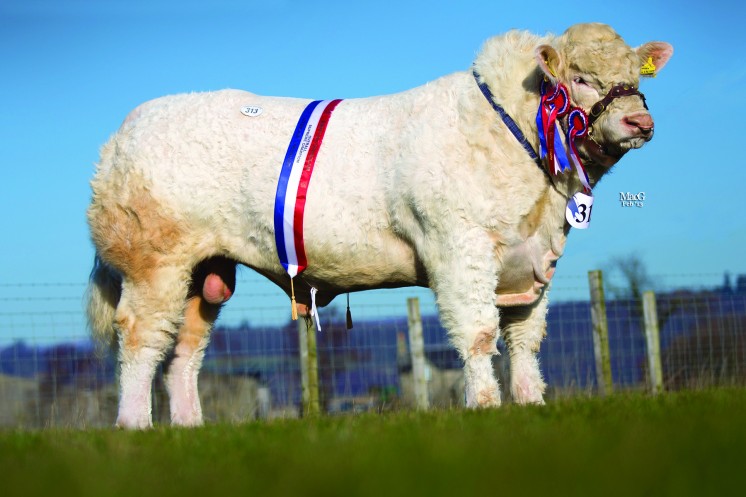 Glenlivet was no stranger to the ring having been much admired on the 2012 show circuit where he secured the Royal Highland interbreed Beef Breeder championship and eventually the champion of Scottish champions at Keith. The Stirling title was a fitting finale for the Milnes – their first ever in almost 40 years of breeding pedigree Charolais. “We’ve gradually built up the herd since we established it in 1975, and now the boys have taken it to the next level; winning the title is a great accolade for them,” said Roy Milne. 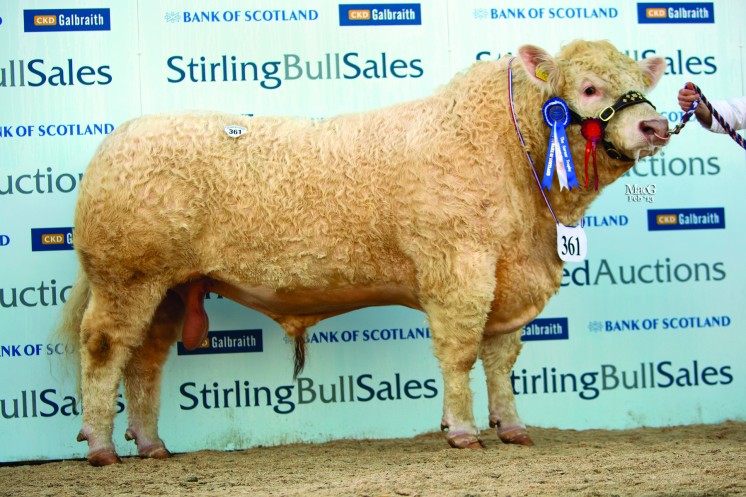 Next at 26,000gns was the first prize winner, Burradon Garibaldi TI +45, SRI +49, a 21 month old from Chris Curry, Thropton, Morpeth and secured in a two way split to run between 300 cows with Neil and Stuart Barclay’s Harestone herd, Insch and the Campbell family’s, Thrunton herd, Alnwick. Sired by the 12,000gns Gwenog Banjo, Garibaldi was out of Burradon Peach, a Killadeas Jack daughter, who at 13 years is hailed to be the most consistent breeding female in his 30 cow herd.

Mr Curry’s success didn’t stop there. He offered two more Banjo sons, who together with Garibaldi stood in reserve place in the group of three and sold to average £19,666. “We’re into Banjo’s third crop of calves and they’re by far the best, they were easy to calve and from day one they just ran away,” he said. 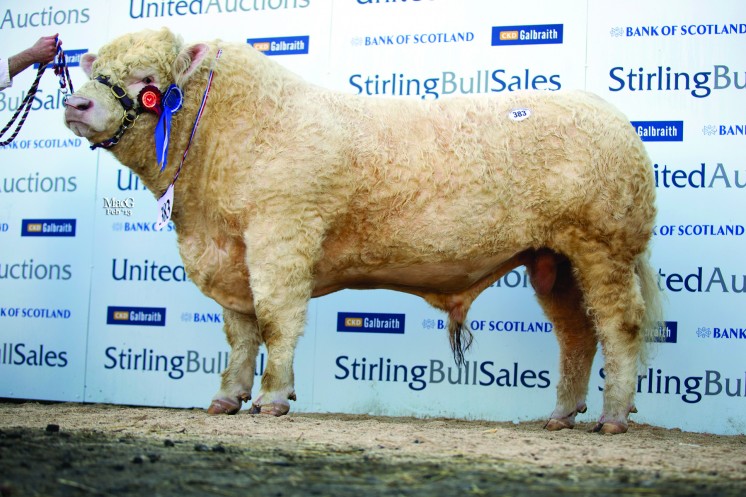 Burradon Goldenballs TI +40, SRI +41, another first prize 21 month old was secured for 22,000gns in a split bid from the Billy and Sarah Turner, Skelton on Ure, Ripon and the Blyth family, Elwick Hartlepool who admired his ‘power and strength’. The third Banjo son, Burradon Goodfellow TI +33, SRI +29 a 20 month old out of a  homebred dam going back to Elrick Samson made 11,000gns to J Wilson and Sons, Newry, Country Down.Flintshire vet, Esmor Evans’ string of entries was led at 20,000gns by Maerdy Grenadier TI +46, SRI +40 by Maerdy Dynamite and out of a homebred dam going back to Maerdy Naser. A first prize winner, he was no stranger to the ring having already secured the breed, junior interbreed and reserve overall interbreed at the Royal Welsh. Grenadier was secured in a two way split between Jim Muirhead, Letham Grange, Arbroath and David and Nick Walter. The Walters more than recouped their earlier two investments with the proceeds of sons by the 8,000gns Swalesmoor Cracker. Balthayock Gladiator TI +81, SRI +77, a 21 month old out of a homebred dam going back to Penfold Seaanchor made 17,000gns to Alasdair Houston, Gretna Green, while a pair of 20 month old twins by Cracker and out of a homebred dam by the 8,000gns Balmyle Thunderbird attracted interest from the commercial sector. First to go at 10,500gns wasBalthayock Guardsman TI +83, SRI +77 to A and O Rodger, Duns, while Balthayock Grenadier TI +83, SRI +77 made 13,000gns to Lour Farms, Ladenford, Forfar.A bid of 15,000gns secured Dundas Godfather TI +52, SRI +41 for J Hepburn, Hawick. Sired by the 15,000gns Maerdy Uniroyal and out of a homebred Kilboy Peregrine dam, he was bred and exhibited by mother and son team, Jessie and Brian Gilchrist, Crawford, Biggar who were enjoying their best ever week in 15 years of breeding Charolais. Not only did they achieve one of their highest prices, but they also claimed with Godfather the reserve senior and overall reserve championships. “We’re simply delighted,” said Brian who runs the eight cow Dundas herd with his cousin, Colin Wight’s Carwood herd and is head shepherd to his uncles’ Midlock flocks.Two sons by 12,500gns Perth senior champion Goldies Banker, were in the money for Jimmy Wilson, Mintlaw, Peterhead. First at 14,000gns was Ugie Goldcup TI +44, SRI +41, a 20 month old out of a homebred dam by the 28,000gns Farleycopse Turbo. The buyer was Colin Wight, Carwood, Biggar. A bid of 12,000gns secured Ugie Goldnuget TI +46, SRI +47 for Clark Farms, Crossford, Carluke. A 21 month old he was out of a Maerdy Oxytone sired dam. 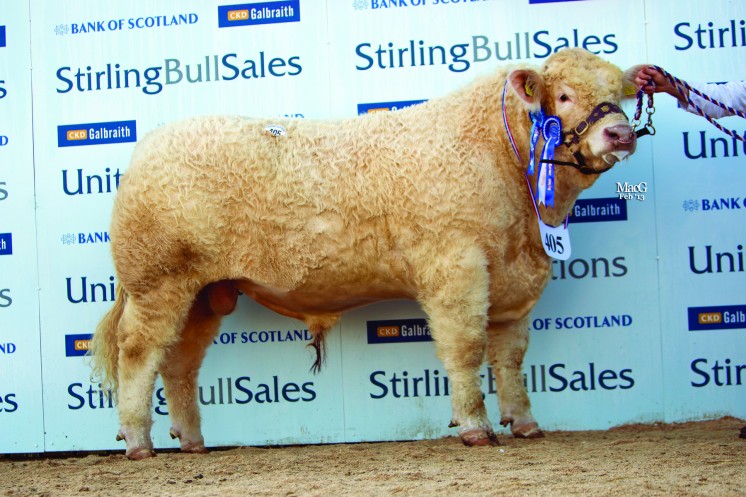 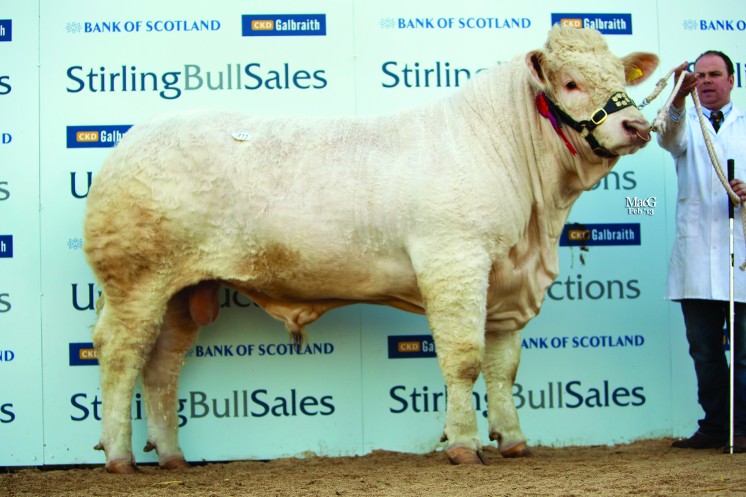 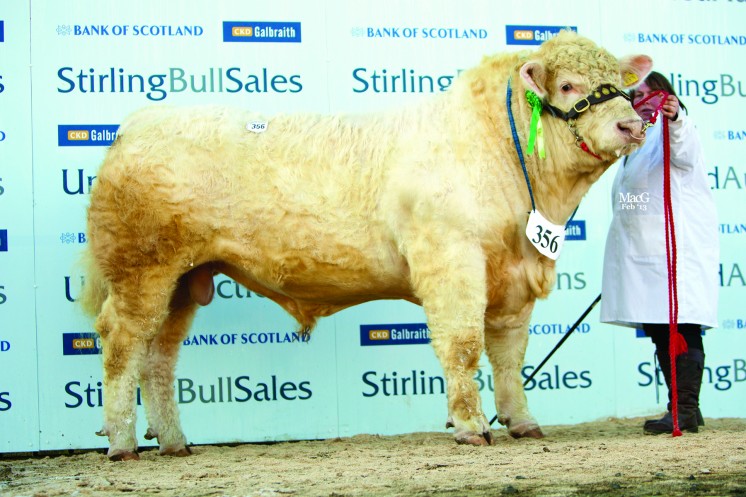 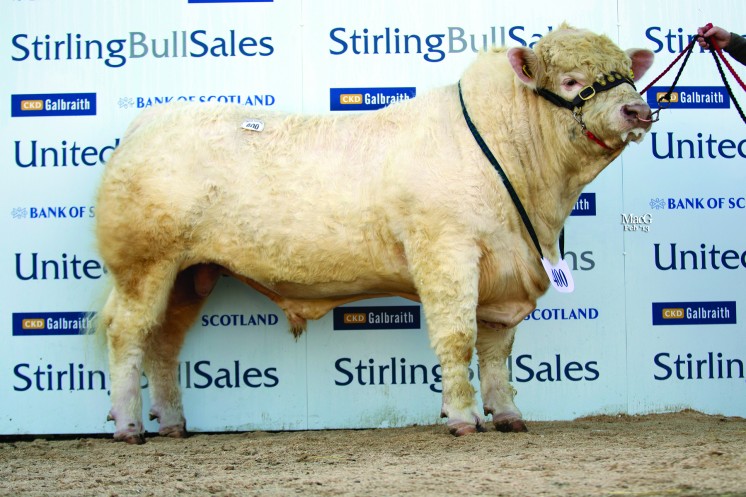 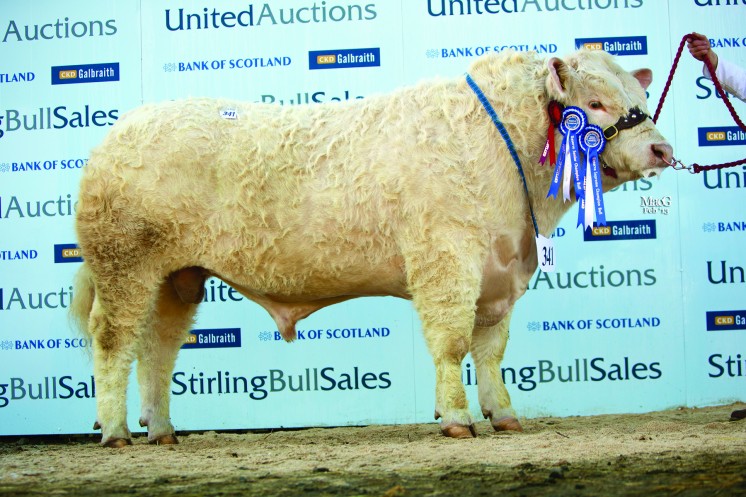 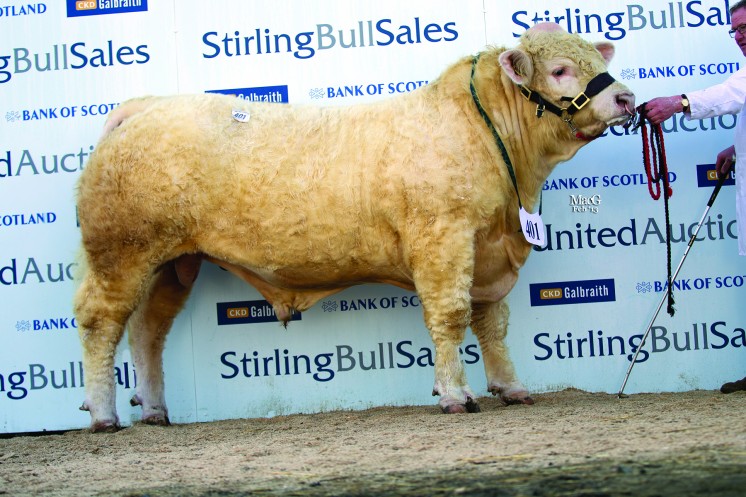 The Campbell family – father Colin, sons, Ian and John and their sons, Bruce, Andrew and Edward were once again in the limelight taking two of the six top award winning slots, the best group of three with sons by their 26,000gns senior stock bull Balmyle Dickler, and they achieved total clearance with their string of 14 entries. 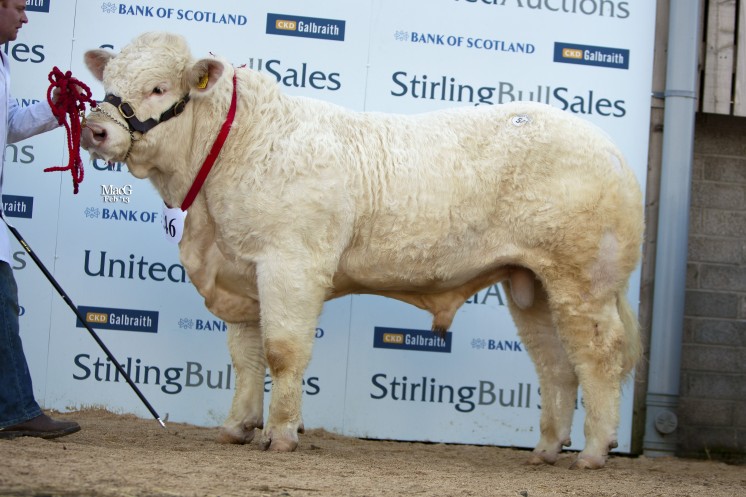 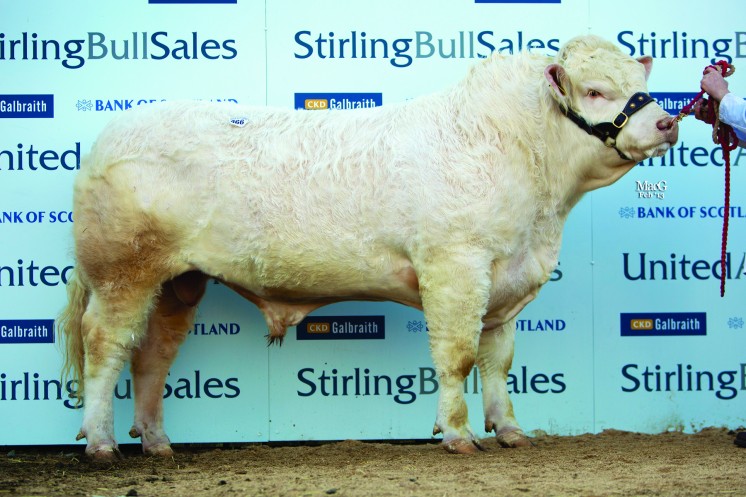 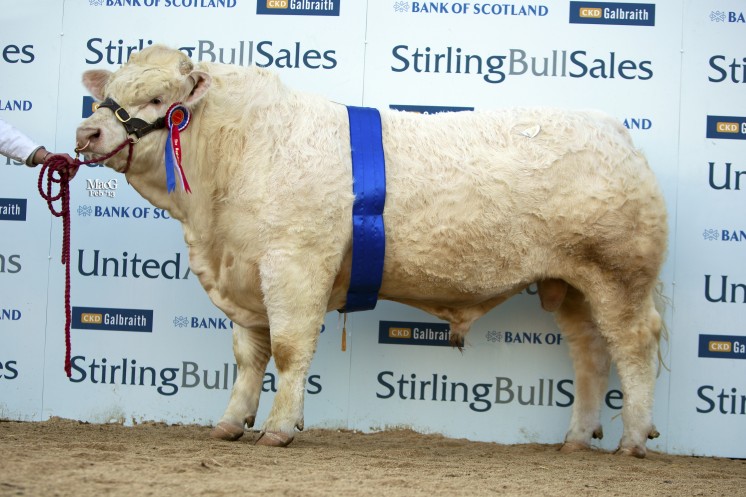 Their highest 12,000gns price tag went to the intermediate reserve champion, Thrunton Guardsman TI +65, SRI +57, an 18 month old he was and out of a homebred Thrunton Tranqulity dam who had bred two Perth supremos and who goes back to the 25,000gns Mowbraypark Orlando. The buyers were Jim Innes and Sons, Huntly who were returning to use Charolais over their suckler herds. The Innes also paid 8,500gns for the 15 month old Newhouse Bigal sired Liscorran Gemt TI +42, SRI +30 from S McKenna Augher, County Tyrone.

Next at 11,000gns was Thrunton Goldnugget TI +59, SRI +51, a 20 month old first prize winner by Dickler and out of another homebred dam going back to Orlando. The buyer was Lour Farms, Forfar. The 18 month old Thrunton Goldeneye TI +69, SRI +63, by Dickler and out of a homebred dam by the 20,000gns Moncur General made 10,000gns to David and Louise Barker, Nuthampstead, Royston, while the junior champion, Thrunton Goshawk TI +56, SRI +46 made 9,000gns to Neil and Stuart Barclay, Harestone, Insch. A 17 month old by Dickler, he was out of a homebred dam by Burradon Talisman. Later in the day, the Campbells offered a draft of heifers led at 4,500gns by Thrunton Flair TI +48, SRI +38, a rising three year old heifer to James Nesbit, Mauchline, Ayr. She was by the 22,000gns Newhouse Bigal and out of a Burradon Talisman daughter. 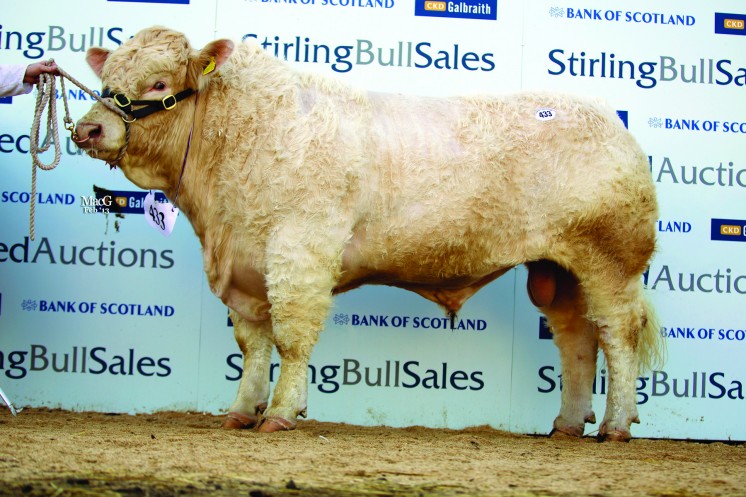 Loganbar Goran TI +49, SRI +44, a first class winner from Murray Lyle, Midcambushinnie, Dunblane sold for 11,500gns and travelled to Dorset with Jane Haw to join Mr and Mrs Andrew White’s Balbithan herd, Worth Matravers. The 19 month old Goran was by Balmyle Addition and out of a homebred Caithness Torpedo dam. 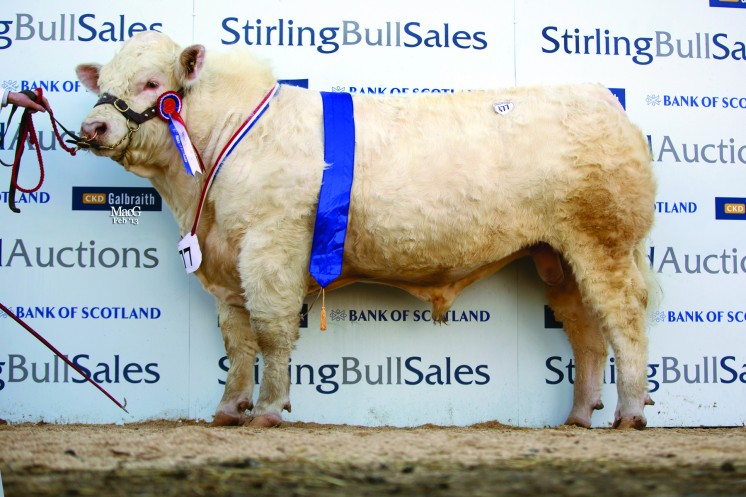 Father and son team, John and Raymond Irvine, Toumintoul, Ballindalloch repeated their success of 12 months earlier by taking the intermediate championship, this time with Inverlochy Gurkha TI +54, SRI +63, an 18 month old by the 30,000gns Balmyle Bollinger and out of a homebred Inverlochy Resolve dam from their 50 cow herd. Gurkha who paved his success after taking the Forfar Stars of the Future championship was knocked down sold for 11,000gns to the National Cattle Breeding Centre, County Meath. 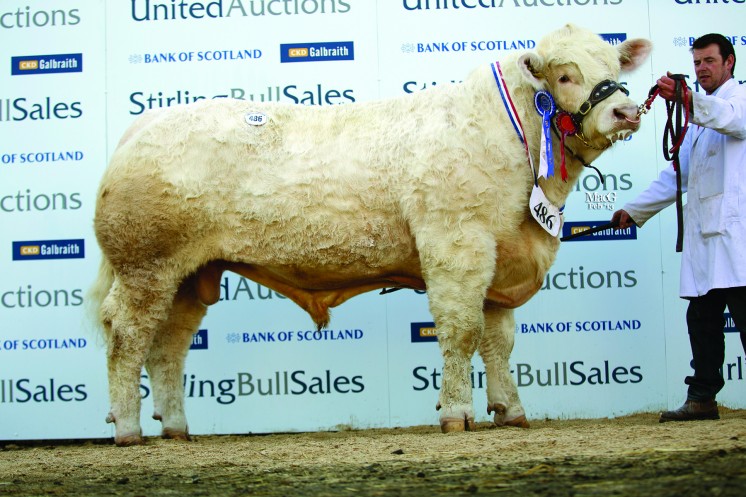 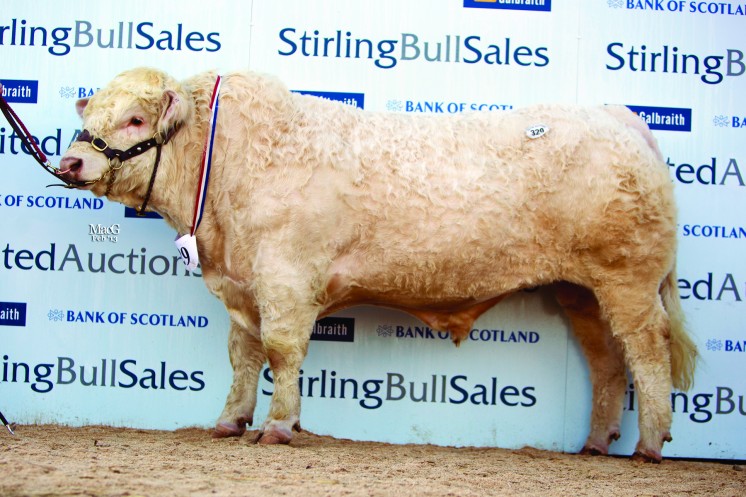 The Irvine’s success didn’t stop there. They were also rewarded with the reserve junior title with Inverlochy Glory TI +35, SRI +42, a same way bred 18 month old selling for 10,000gns to Neil and Stuart Barclay. Earlier in the day the Irvines also took a second 11,000gns bid, this time for their first class winner, Inverlochy Gallant TI +50, SRI +51, a 20 month old Lochend Apache son. He went to join one of Cumbria’s largest suckler herds at Greystoke Castle Farms, Greystoke, Penrith. 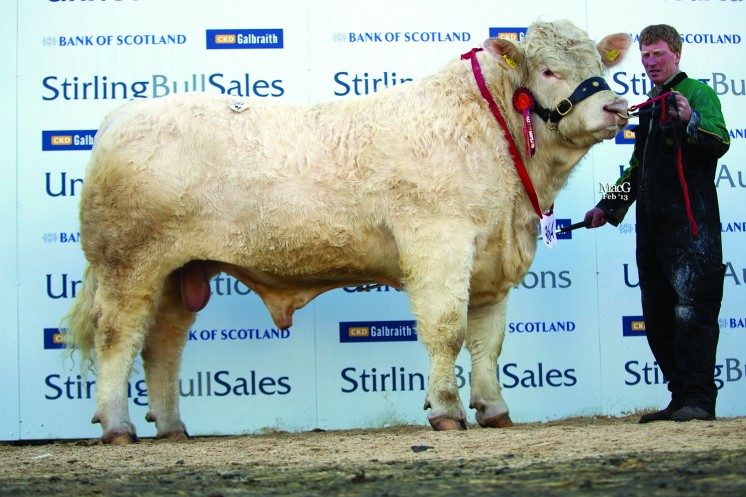 The Irvines invested some of their taking in Blelack Giggsey TI +49, SRI +48 at 11,000gns and heading a string of entries from the Massie father and son team, Neil and Graeme, Dinnet, Aboyne. This first class prize winner was a Ugie Diamond son and out of a Balthayock Lombardo dam. 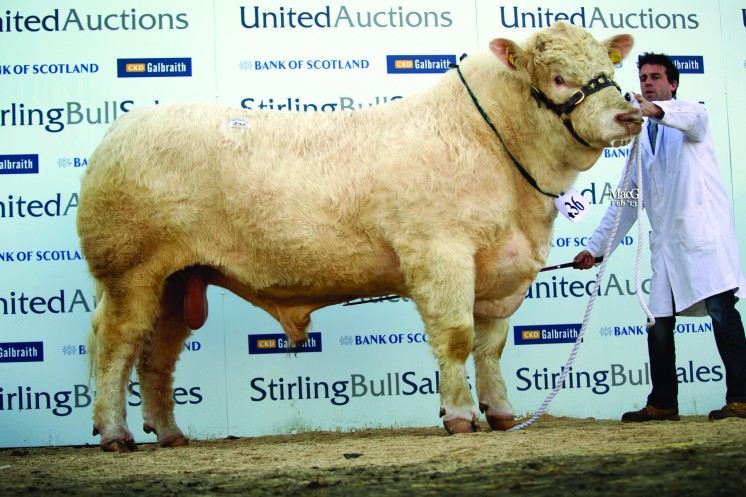 Alsnow Genereux TI +51, SRI +49, an 18 month old by the homebred Alsnow Eddie going back to Blelack Roger and out of a Givendale bred dam from Alan Lawson, Hallington, Newcastle returned to Tynedale with Lewis Forster, Hexham for 11,000gns. 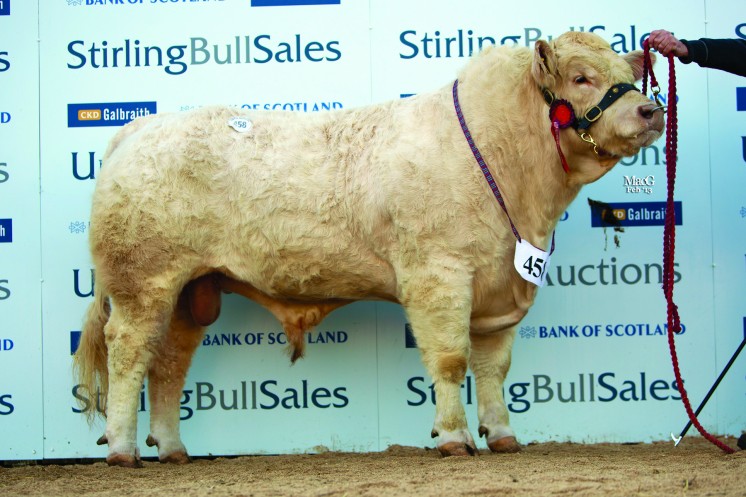 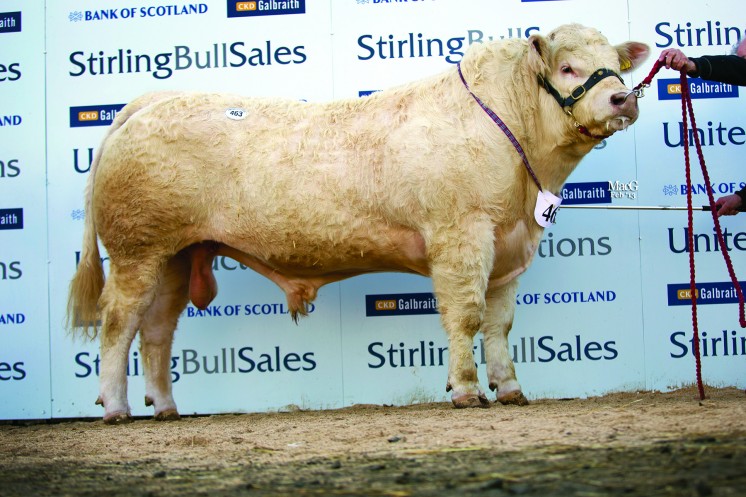 A consignment of Northern Ireland bred bulls from eight different vendors was headed by entries from Wil Short, Omagh with Corrie Alan sons. His leader at 11,000gns was Woodpark Golddust TI +43, SRI +48, a 19 month old out of a Doonally Olmeto sired homebred dam. He went home with Dunbeath Farms, Dunbeath, Caithness. Minutes later, his Woodpark Granite TI +39, SRI +41, an 18 month old attracted 10,500gns from A Paton, Straiton, Maybole. Next at 10,000gns were Woodpark Gladstone TI +40, SRI +49, and an 18 month old to the Adie Farm Partnership, Edgerton, and Inverness. 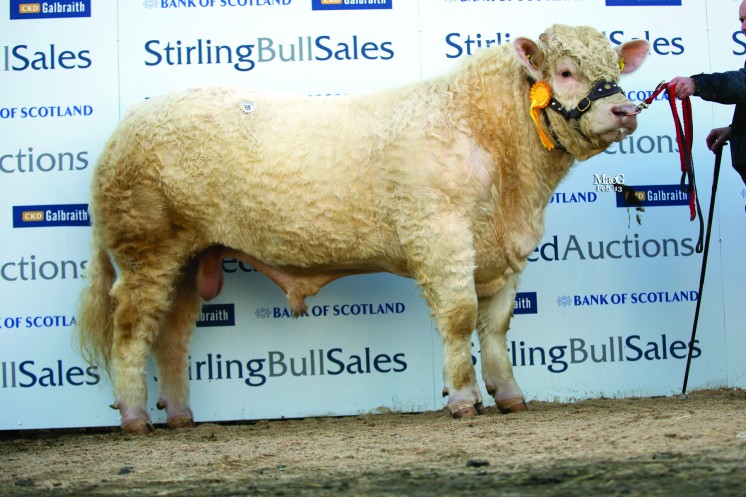 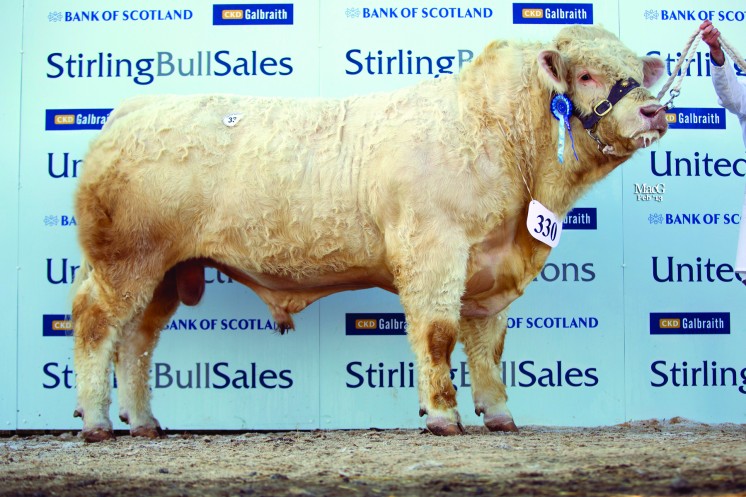 Glenericht Gucci TI +28, SRI +27, a 22 month old by the 28,000gns Goldies Champion from WK and P Drysdale, Blairgowrie attracted a 10,000gns split bid from Messrs Durno and Sons, Glenlivet, Ballindalloch and the Barclays, Insch. The Barclays continued their spend at 10,000gns with Allanfauld Glenturret TI +31, SRI +36, a 20 month old by Allandfauld Defender and out of a Gretnahouse Noel sired dam from father and son team, Archie and John MacGregor, Kilsyth, Glasgow. 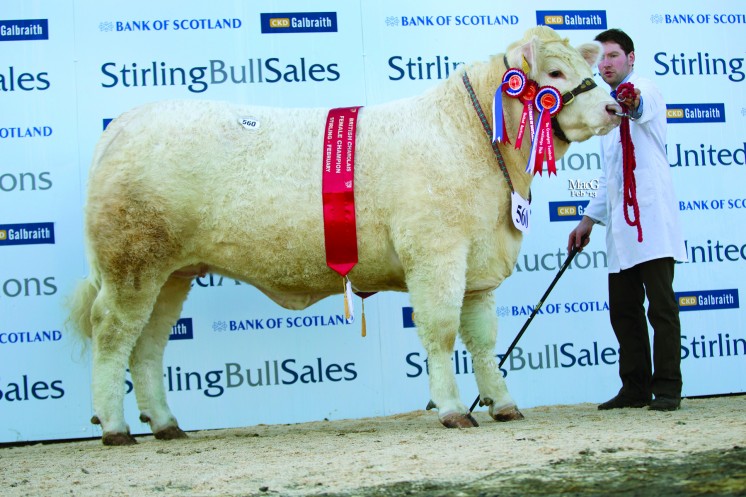 The MacGregors led the female trade at 5,000gns with their champion, Allanfauld Geranium TI +53, SRI +48, a two year old heifer by Elgin Davinci and sold in calf to Woodpark Elgin to Messrs MacGillvray, Glastullich, Ross-shire. Geranium was overall junior breed champion at the Royal Highland on another outing.