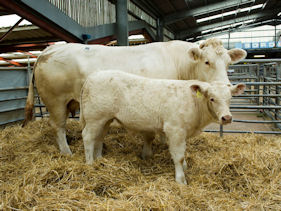 Charolais met a ready demand selling to a top of 6,700gns at Carlisle on Friday 24 August when entries from three Charolais herds came under the hammer.

Next came the four year old Logan Dubacilla and her bull calf Logan Georgie at 6,300gns. Dubacilla, by Logan Amazon, goes back to the 14,000gns Killadeas Jack and sold for 2,800gns to A and J Clark, Stranraer, Dumfriesshire, whilst her bull calf, Geordie, by Ramses, went for 3,500gns to A McCornick, Dumfries, Dumfriesshire.

The three year old heifer Logan Elegant, by Amazon, went for a call of 5,000gns to D Bloomfield, Woodbridge, Suffolk.

Logan Silk, an 11 year old by Killadeas Jack sold for 4,600gns to G G and H E Graham, Abergavenny, Gwent, with her bull calf Logan Galloway, by Equity at foot.

Logan Berry, a six year old by Sparticus daughter, and her 10 month old heifer calf Logan Ginty, sired by Equity, were knocked down for 4,200gns. Berry was purchased by J Watson, Berwick-upon-Tweed, Northumberland for 2,800gns and Ginty went home with Messrs Nicholas and Heath, Chester, Cheshire at 1,400gns. The same buyers also went to 2,500gns for the leading entry from a draft from Mornity Farms, Blairgowrie, Perthshire. Mornity Fawn was a 21 month old maiden heifer by Blelack Challenger.

Topping the Mowbraypark herd reduction from M V and M E Atkinson, Ripon, North Yorkshire, was Mowbraypark Fleur at 2,800gns. This two year old heifer by Fairway Bruce was in calf to Klibreck Ecosse and sold to A Slack, Appleby, Cumbria. Fleur made up the reserve interbreed pairs champion at the Great Yorkshire Show earlier in the year.

Following closely was Mowbraypark Vermouth at 2,700gns. This seven year old cow by Mowbraypark Paramount and with four month old bull calf Mowbraypark Harvey by Ecosse at foot sold to P Walker, Cockermouth, Cumbria. Vermouth had been running back with Ecosse prior to the sale.

A bid of 2,600gns claimed Bassingbourn Diversion, by Alwent Ulysses and out of Mowbraypark Overpass. This one went home with P and V Vasey, Carlisle, Cumbria and was in calf to Ecosse.