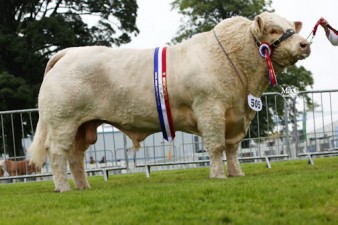 Three year old Balmyle Eclipse, by the 26,000gns Sackville Adonis and out of a cow going back to the 28,000gns Brampton Nacodar, took home the breed championship. This one was bred and exhibited by W P Bruce Ltd, Meigle, Perthshire and was retained as the herd’s stock bull in 2010.

Edenhurst Cognac, jointly owned and exhibited by Messrs L Clarke, Lurgan, County Armagh and R A Milne, Elgin, Morayshire, secured the reserve breed title in his first outing. This five year old by Oldstone Egbert and out of a Dingle Hofmeister-sired dam was bred by P Vasey, Carlisle, Cumbria.

Best female & best opposite sex to champion was awarded to Balmaud Davina from M Bruce and Partners Ltd, Ellon, Aberdeenshire, a three year old by the 11,000gns Maerdy Tank and out of a home-bred dam. Davina was bred by W and G Strachan, Mill of Balmaud, Banffshire.

Elrick Fiona, a two year old by the 12,000gns Coolaslee Adversary and out of a home-bred cow took the reserve female spot. This one was owned by W K and P Drysdale, Blairgowrie, Perthshire and bred by M J Massie, Ellon, Aberdeenshire

Allanfauld Geranium won the junior female and overall junior championships. Geranium, a 15 month old by the £20,000 Elgin Davinci and out of a Harestone Tadorne-sired dam, was bred and exhibited by A Macgregor, Kilsyth, Glasgow.

Claiming the Beef Breeder championship was Elgin Glenlevit, a 14 month old by Elgin Davinci and out of Corrie Debbie from R A Milne, Elgin, Morayshire. Charolais dominated the interbreed class that took into account genetic potential as well as appearance with Blackford Gladiator from A Macpherson, Croy, Inverness-shire also taking reserve place for Charolais. Gladiator was a 13 month old son of the 22,000gns Newhouse Bigal and out of a home-bred dam.

Young Charolais enthusiasts in the winnings 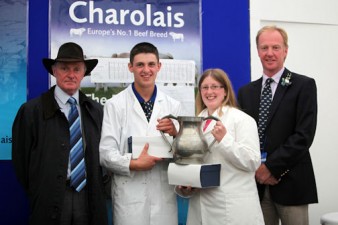 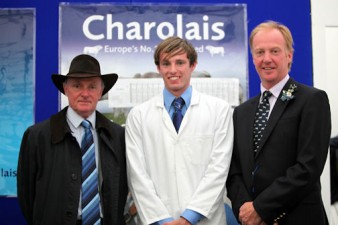 Young Charolais enthusiasts from all parts of the UK travelled to the Royal Highland Show where the breed society held its young stock judging finals on Friday 22 June, kindly sponsored by the DNA testing company, Weatherbys, Ireland.

Topping the senior section and winning the overall award was 20 year old Scott Smith from the South West region. Scott, from the Liskeard-based Colfrey herd, scored 145 out of 150 and won an accompanying trip to Moulins Show in France. Second placed Philip Johnston, from Northern Ireland, also scored an impressive 145 points and was only placed second after both leading competitors gave reasons on the Yearling Bull class to the Master Judge Alasdair Houston and Steward Iain Millar. Both of whom commented that is was a close called choice. In third place was Gary Wright from Scotland with 143 points.

The intermediate section was won by Border region’s Stuart Hird, aged 17 from the Cumbrian Bluegate herd with 143 points. Second place was awarded to Adam Johnston from Northern Ireland and third went to Wales’ Cennydd Owen Jones. Stuart also made up half of the Fairway Trophy winning team alongside Border region’s Anita Jackson with a combined score of 283. Northern Ireland’s Philip Johnston and Nicky Hughes came in second and the South West’s team of Michelle Hanson and overall winner Scott Smith were a close third.

Unfortunately a scoring error on the day prevented Stuart being recognised as the class winner and the Society would like to express its most sincere apologies both to Stuart and the rest of the competitors in the 14 to 17 year old class. 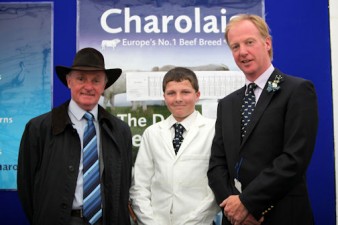 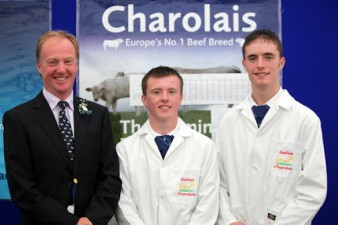 Thirteen year old Donald Maclean from the Eastleigh based Mortimers Charolais herd achieved the top spot in the junior 8 to 13 year old section with 134 points, beating off Rachel Bell from the Borders region and Toby Ranson from the South East.

Master judge, Alasdair Houston of the Gretnahouse herd, Gretna Green commented: “It was a real pleasure to see our young enthusiasts and some of our keenest breeders of the future from all over the UK taking part in the national finals. There were three challenging classes to judge and all entrants approached them very professionally and demonstrated such a very high standard and level of genuine enthusiasm which bodes well for the future of the Charolais breed.”

Weatherby’s John Flynn added: “We were absolutely delighted to be able to sponsor this event for the second year running. It’s a fantastic event to be involved with and support as it’s so important for the industry to engage the breeders of the future.”