Charolais led with an exceptional trade at the Royal Northern Spring Show, at Aberdeen and Northern Marts’ Thainstone Centre, Inverurie on Wednesday 29 February where two all-breed centre records were established – bulls sold to a new top of 16,500gns and 18 lots averaged £7,460.

“Trade was on fire throughout the 60 minute sale reflecting the unsurprising resurgence in demand for Charolais bulls,” commented the society’s David Benson. “This demand was fuelled by commercial men confident that Charolais will leave fast growing calves with excellent conformation which has led them to command a 10% premium in the store ring, according to AHDB data.” 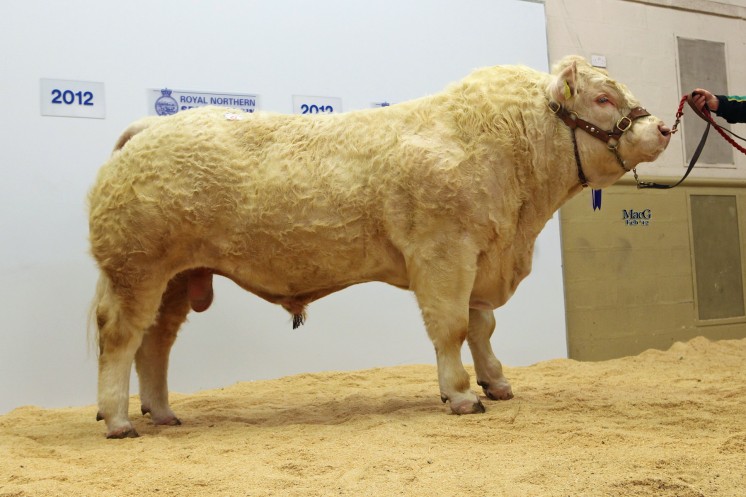 Sale leader at 16,500gns was Kinclune Frater, a 20 month old by the 20,000gns Perth supremo, Thrunton Crownprince and out of a homebred dam from his 50 cow pedigree herd by Derryharney Peter. Bred and exhibited by John Wilson, Glenkindie, Alford he was knocked down sold to Philip Simmers, Backmuir Trading, Keith. Mr Simmers secured another two Crownprice sons – he paid 13,000gns for the 20 month old Kinclune Freeman and 7,200gns for the first entry in the catalogue, Kinclune Forman, a rising two year old, out of a homebred dam by the 10,000gns Maerdy Rumbull.

John Wilson enjoyed his best ever day in Inverurie in 35 years of exhibiting at the event with a total of nine bulls selling to average £8,633. His next best at 9,500gns was Kinclune Fantastic, a 19 month old by the 7,000gns Maerdy Boom and out of a homebred cow going back to Killadeas Legend. The buyer was near neighbour, George Wilson and Son, Glenkindie, Alford.

The day’s second highest call of 14,000gns went to Elgin Findlay TI +42, SRI +34, a 20 month old from the Milne family, Llanbryde, Elgin. An Elgin Davinci son and out of a Gower Versace sired dam, the buyer was J Baxter, Gamrie, Banff.

Next at 7,200gns was the interbreed supreme champion, Harestone Ferrari TI +27, +SRI 26, a 22 month old by Glencoe Conrad and out of a homebred cow by Maerdy Impeccable. Bred and exhibited by father and son team, Neil and Stuart Barclay, Crathes, Banchory, he was knocked down sold to C Smith, Lumphanan, Banchory. Harestone Foreman TI +51, SRI +43, another 22 month old by Harestone Tyrol from the same breeders made 5,800gns to T and I Alexander, Lyth, Wick.

Elrick Falcon TI +40, SRI +38, a 22 month old from Mike Massie, Auchnagatt, Ellon made 7,000gns to A Brown, Midmar, Inverurie. Sired by the 12,000gns Coolnaslee Adversary, he was out of a homebred dam going back to Blelack Roger. Elrick Fabian TI +34, SRI +32, another same age and same way bred entry from Mike Massie commanded a 6,800gns bid from Graeme Leggat, New Pitsligo, Fraserburgh.

Blelack Felix TI +41, SRI 25, a rising two year old entry from Neil and Graeme Massie, Dinnett, Aboyne made 5,000gns to A and J Wilson, Culsalmond, Insch. Sired by the 12,000gns Maerdy Dublin, he was out of a homebred dam by the 25,000gns Perth supremo, Thrunton Socrates.