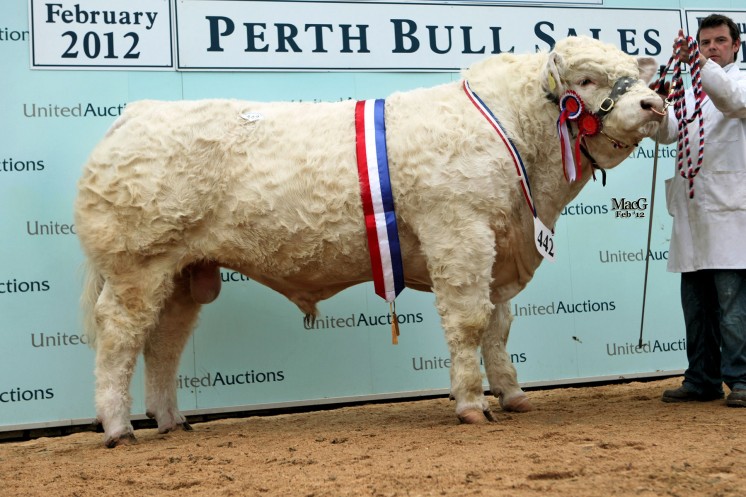 Charolais bulls met an exceptional demand driven by the commercial sector in Stirling on Tuesday 21 February at the breed’s official spring sale where bidding peaked at 25,000gns, two new centre all breeds records were smashed with 34 lots trading at five figure sums and 168 lots selling to average £7,653, a figure representing 83% clearance leaving Charolais to once again take the lead at the spring multi-beef breed sales. A further seven bulls sold outside the ring resulting in the sale grossing over £1.3 million in total.

“The day’s consistent trade, from beginning to end, firmly reflected commercial producers’ demand for Charolais culminating in two new Stirling records and endorsing the breed’s continuing leading role in the beef sector, a fitting start to our golden anniversary year,” commented society chairman, Martin Donaghy after the five hour stint. “Twelve month old Charolais crosses last year achieved a 10% premium in the store ring over all over Continental crosses according to official AHDB market intelligence data, a trend confirming that both growth is king and customer is king.”

Sale leader at 25,000gns was Inverlochy Ferdie TI +40, SRI +47, an 18 month old out of a homebred dam by the noted Inverlochy Resolve and a son of the 30,000gns Balmyle Bollinger, sire of the record breaking 70,000gns Barnsford Ferny. Bred and exhibited by father and son team, John and Raymond Irvine, Toumintoul, Ballindalloch, Ferdie sold to Neil Barclay and his son, Stuart, Insch to run with their 150 cow Harestone herd. “This bull is the one to take forward our herd,” commented Neil. “He has muscle and scale combined with strength and power.” Meanwhile the Barclays virtually recouped their investment having sold three entries earlier in the day including their leader at 11,500gns Harestone Figaro TI +31, SRI +35, a Balmyle Addition son, to George Wordie, Glass, Huntly.

Twenty four hours earlier, Inverlochy Ferdie had been much admired by the judge, Irish Charolais Society president, Martin Ryan who placed him intermediate and overall reserve supreme champion after deliberating with his stable mate Inverlochy Fencer TI +44, SRI +56, a 17 month old, again by Bollinger who he awarded the junior and overall supreme championship. The pair stood in exactly the same slots on their only other outing at Forfar’s Stars of the Future Show three months ago.

“I have never seen two such perfect bulls; they had it all when it came to demonstrating the high value cuts yet still retaining functionality and good locomotion,” said Martyn Ryan. “However it was Fencer’s additional length which gave him the edge.” He made 20,000gns and went to join John Jeffrey’s 60 cow Kerseknowe herd based at Kelso. “Fencer is very correct, he has stretch, fleshing and very good figures to match,” he said.

The Irvines success didn’t stop with the top two places; they also claimed the reserve intermediate title with the 18 month old Conval Frank TI+55, SRI +53, jointly owned with near neighbour, John Gauld. Sired by the 4,000gns Lochend Apache, he was out of a homebred dam going back to Mortimers and was knocked down sold for 13,000gns to NI breeder, George Henderson, Bushmills who later recouped his spend when he sold Sandelford Fabregas TI + 42, SRI +39, a 16 month old Goldies Usher son for 12,000gns to Messrs Strawhorn and Son, Lockerbie

After 30 years of persistence, this week brought it’s just rewards for the Irvines – 2005 was the closest they came to securing the Perth supreme title with two senior awards made to sons by their Inverlochy Resolve. However to take three out of the six top slots was the double icing on the cake. “I was aware we had some quality bulls lined up, however the final action in the ring was a completely surreal experience and it happened at lightning speed,” commented Raymond. Gilding the lily was the fact the Irvines then went on to achieve a new record Charolais herd average of £14,595 for five lots.

The day’s second highest call of 22,000gns set the tone within the fixture’s first few minutes The senior champion, Blelack Forester TI +48, SRI +38, a rising two year old by the 14,000gns Maerdy Dublin and out of a homebred dam by the supreme Perth champion, Cargriff Victorious was bred and exhibited by father and son team, Neil and Graeme Massie, Aboyne, and sold in a three way split to Perthshire breeders Bill Bruce, Balmyle and David Walter, Balthayock and Drew and Bob Adam, Newhouse, Glamis.

The Massies went on to average £9,533 with a total of nine entries sold including Blelack Foster TI +56, SRI +56 at 13,000gns to Messrs Davies and Sons, Llangammarch Wells, Powys. Foster was a 21 month old by Swalesmoor Bayonet and out of a homebred dam by the 25,000gns Perth champion, Thrunton Socrates. Minutes earlier, the Massies sold for 12,500gns Blelack Foxhunter TI+65, SRI +63, another same age and same way bred entry. The buyer was Messrs Fife, Elsick Estate, Stonehaven.

Blelack Fantastic, the highest performance recorded entry in the catalogue at TI +82, SRI +72 was among eight entries bid to 12,000gns each. A son of the 15,000gns Goldies Dynamite, he was out of a homebred dam by the 25,000gns Perth champion, Thrunton Socrates and he went home with commercial producers, Messrs Adams and Son, Wigtown, Newton Stewart.

The day’s second 20,000gns call was made by Peter Donger, Foxley, Towcester for Maerdy Flambeau TI+24, SRI+15 from Flintshire vet, Esmor Evans, Mold. This first prize 16 month old was by T-Unisson and out of a homebred dam by Maerdy Sinndar. “This bull was well grown for his age, he was long, clean and full of breed character,” said Mr Donger. Flambeau among the string of 11 bulls from the same breeder along with another class winner, Maerdy Fiend TI+27, SRI +33, a 13 month old Victorieux and out of a Grangwood sired homebred dam. He made 12,000gns to Gilbert Crawford, Maghera, County Derry.

Next at 18,000gns was the 18 month old class winner, Thrunton Fairfax TI+64, SRI +52 by the 22,000gns Newhouse Bigal and out of a homebred dam by Maerdy Location. Bred and exhibited by the Thrunton, Alnwick based Campbell family, Ian and John and their father, Colin, he sold to Ben Harman, Chesham who deemed him as the complete package. “Fairfax had a wonderful damline, a tremendous top line and a terrific set of figures for the key performance traits.” Earlier on Mr Harman had achieved 12,000gns for his sole entry from Smallburn Farm, Elgin. His 19 month old Chesham Fiji TI +49, SRI +46 was bred from homebred lines going back to the 30,000gns Thrunton Voltage and Moynton Legrand.

The Campbells sold a string of 12 entries to average £9,316 including Thrunton Figaro TI +41, SRI +29, a 20 month old Newhouse Bigal son, and out of a homebred dam by Burradon Talisman from their 130 cow herd. Figaro was bid to 13,500gns by Messrs Watkins, Cold Brook, Abergavenny. Next at 13,000gns was the same way bred 18 month old Thrunton Fireball TI +51, SRI +38 who was knocked down sold to Messrs Prentice and Son, Castle Douglas.

A bid of 12,000gns from Messrs McQuade, Virginia, County Cavan was made for the 20 month old class winner, Thrunton Fraser TI +30, SRI +31 by Talisman and out of a homebred dam by the 25,000gns Perth supremo, Mowbraypark Orlando. The 17 month old Thrunton Frederick TI +57, SRI +41, another Bigal son and out of a Solwayfirth Union sired homebred dam sold for 10,000gns to Messrs Leiper, Ponteland, Newcastle.

Two entries shared a 16,000gns bid. First to go was Anside Foreman TI +35, SRI +40, a 20 month old who headed up his class for Martyn Irvine, Drummuir, Keith. A Balmyle Bollinger son, he was out of a Fairway Vandieman sired Moyness bred dam from his three cow herd and went to join Kevin Thomas’ Moelfre herd, Capel Iwan, Newcastle Emlyn.

The second 16,000gns price tag went to Woodpark Flashman TI +52, SRI +47, an 18 month old Corrie Alan son and out of a Doonally sired homebred dam. Bred and exhibited by Will Short, Beragh, Omagh, he went home with A and MP Owen, Pentre Foelas, Betwys-y-Coed.

The 17 month old Balthayock Fearless, another bull within the breed’s top 1% with a TI +63 and SRI +60, was secured for 14,000gns by Messrs Keay and Son, Kirriemuir, Angus. Bred and exhibited by David Walter and his son, Nick, Balthayock, Perth, Fearless was by Adonis and out of a homebred dam going back to Mortimers Roselier.

Cumbria breeders, W Richardson and Sons, Mealbank, Kendal offered their sole entry, Laverock Fabio for 14,000gns to a two way split to Drew and Bob Adam, Newhouse, Glamis and the Campbell family, Thrunton, Alnwick. This 21 month old class winner was by Corrie Alan and out of a homebred dam.

Colin Wight, Biggar offered his sole entry at 13,000gns to Messrs McGibbon, Alyth, Blairgowrie. Carwood Frosty TI+53, SRI +37 was a 21 month old by Maerdy Uniroyal and out of a homebred dam going back to Criffel Vainqueur

Class winner, Allanfauld Fastrack TI +48, SRI +41, a 21 month old by Elgin Davinci and out of a homebred cow by Harestone Tadorne was secured from Archie MacGregor, Kilsyth for 12,000gns to Messrs Abel, Llanidbeg, Powys.

Another 21 month old class winner attracted a 12,000gns call, this time Glenericht Fearless TI +23, SRI +29 from Messrs Hamilton, Thornhill. Bred and exhibited by WK and P Drysdale, Blairgowrie, he was a Balnuith Valour son and out of a homebred dam going back to Seaville lines.

At 12,000gns each, Michael Massie, Auchnagatt, Ellon offered a brace of 18 month olds by Maerdy Dublin and out of homebred dams by Blelack Roger. Elrick Fable TI +41, SRI +37 went to Messrs Smellie and Partners, Peebles, while Elrick Frenchman TI +53, SRI +51 was secured in a split between Jim Muirhead, Letham Grange, Arbroath and Mornity Farms, Alyth, Blairgowrie.

Leading the trade at 11,500gns for Hamish Goldie, Ruthwell, Dumfries was Goldies Falcon TI +47, SRI +51, a 20 month old Goldies Champion son and out of a homebred dam going back to Dingle Hofmeister. The buyers were was Messrs Jones and Son, Dryslwyn, Carmarthen.

Hamish Goldie sold his string of 10 bulls to average £7,854 including two 19 month olds at 10,000gns each. Goldies Floyd TI +42, SRI +37, a Goldies Uppermost son and out of a Balthayock Ulex sired homebred dam was knocked down sold to Messrs Provan, Douglas, Lanark. Class winner, Goldies Fenwick TI+17, SRI +21, by the 25,000gns Thrunton Camelot and out of a Ravensworth sired homebred dam went home with Messrs Hunter, Culsalmond, Insch.

Towards the end of the day, Hamish Goldie traded his reserve junior champion, Goldies Fellow TI +32, SRI +34 at 9,500gns to Messrs Forbes and Sons, Nairn. A 15 month old, Fellow was by the 38,000gns Goldies Champion and out of a dam going back to the 25,000gns Perth champion, Goldies Unbeatable.

Neil and Judith Murray, Scone offered their first of two entries at 10,000gns to Stewart of Kininmonth, Cupar. Class winner, Forfar Fraser TI +27, SRI +9 was a rising two year old by the 24,000gns Mowbraypark Torpedo and out of a Brampton Orlan sired homebred dam.

The sole collective female forward was bid to a top of 2,800gns by Messrs Meikle, Jackton, East Kilbride for Westcarse Fifi TI +20, SRI +18, a two year heifer from John Christie, Stirling. A Kersknowe Clansman daughter she was out of a homebred dam going back to Lochnagar Imperator.

Edward Clayhills-Henderson’s Claymore dispersal was headed at 2,000gns twice. First to go was Claymore Blanche TI +49, SRI +47, a six year old by Bassingbourn Ralph and out of a Balthayock sired dam. The buyer was Messrs Jamieson and Son, Slains, Ellon. Minutes later, Messrs Smith and Son, Beith, Ayr paid 2,000gns for Claymore Frostbite, a 10 month old bull by Thrunton Baron and out of a Moyness Vivacious sired homebred dam.