Demand was high for Charolais bulls in Stirling on Monday 2 May. Bidding peaked at 9,000gns and 31 lots sold to an average of £4275. 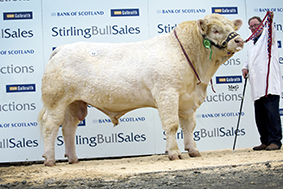 The Walters went on to sell another Ugie Echo son, the 16 month old Balthayock James TI +54 SRI +60 who sold in a 4,500gns deal to the Aitken brothers, Linlithgow, West Lothian. 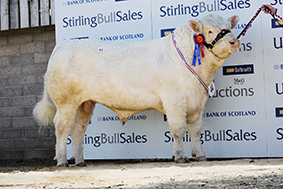 The reserve champion Lakelady Jelle was next to sell for Katreen Millar, Port of Menteith, Stirlingshire. The June 2014-born Jelle by the 10,000gns Mortimers Echo and out of the homebred Lakelady Elle who has previously sold sons to 9000gns was snapped up by C Thomson, Midmar, Aberdeenshire for 7,200gns. 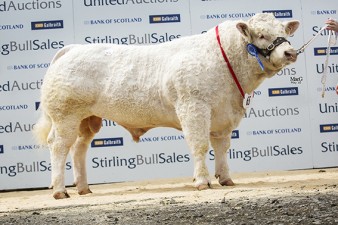 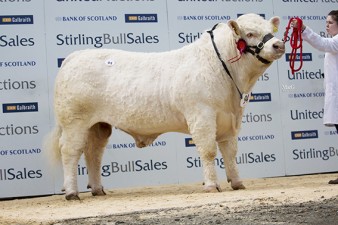 The second to sell at a 7,000gns price tag was the 16 month old Panmure Lincoln TI +50 SRI +50 who won his class in the show and has previously been awarded the Stars of the Future Calf Show reserve junior male. George Russell, Denny, Stirlingshire forked out the cash for this son of the 10,500gns Carlisle intermediate male champion Thrunton Firecracker to breeders and exhibitors JM Cant & Partners, Arbitlot, Angus. 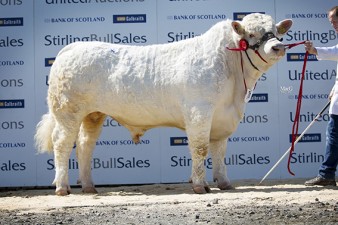 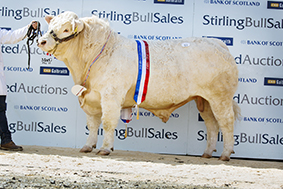 Earlier in the day Mr Muir purchased the Champion Falleninch Julius from Andrew Hornall, Stirling, Stirlingshire for 5,000gns. The August 2014-born Julius is sired by Dereskit Fernando and out of Falleninch Anna going back to Mortimers Tebay. 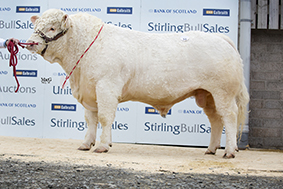 At 5,200gns Messrs Kelsall and Marsden, Preston, Lancashire were the next to sell. The April 2014-born Bleasdale Justice sired by Vexour Freddy was purchased by Nether Balfour Farms Park, Banchory, Aberdeenshire.

JHC Campbell and Sons, Alnwick, Northumberland was the exhibitor of the next lot Thrunton Jerome sired by the homebred Thrunton Gladiator. KM Fraser, Newburgh, Fife were the puchasers of this 22 month old at 4,800gns.

Another to sell for the Campbell’ was their class winner Thrunton Jordon, a 21 month old son of the 19,000gns Corrie Alan who sold for 4,000gns when clapped down to Woodmill Farms, Auchtermuchty, Fife.

Richard and Carol Rettie, Alloa, Clackmannanshire sold the next two lots both by the popular sire Blelack Digger. Firstly at 4,200gns was the 16 month old Retties Johnniewalker TI +66 SRI +60 who caught the eye of M Dykes, Kilmarnock, Ayrshire and earlier in the day OFJW Leitch, Taynuilt, Argyll purchased the 18 month old Retties Jagerbomb TI +63 SRI +57 from the same vendors at 4,000gns.

The final lot to bring 4,000gns was the March 2014-born Kersknowe Juggler, a son of the 20,000gns Stirling supreme champion and Stars of the Future senior interbreed champion Inverlochy Fencer from James Jeffrey, Kelso, Roxburgshire. The man behind the money on this one was K Spence, Lockerbie, Dumfriesshire. 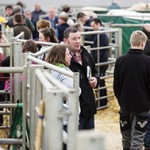 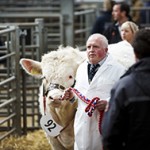 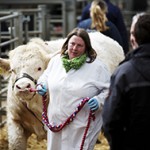 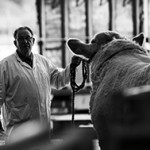 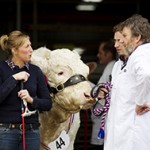 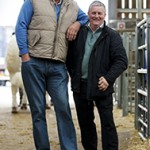