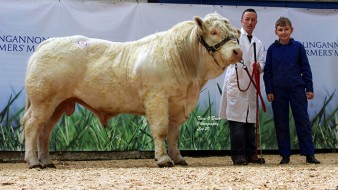 The 24 lots were topped by an entry from M Surphlis, Ballyhullagh, Co Fermanagh. Waterview Jupiter an 18 month old son of the French imported Pirate was purchased by A Stevenson, Ballymoney, Co Antrim. 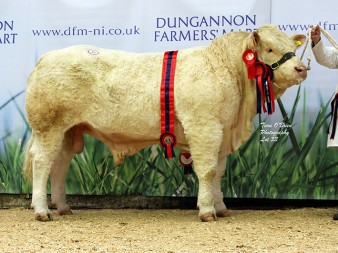 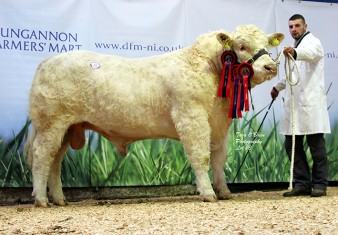 Earlier in the sale Mr Crawford bagged 3,700gns for the reserve supreme and senior male champion Coolnaslee Jim. The November 2014-born Jim sired by the 12,000gns Maerdy Fiend went home with F and A King to Warrenpoint, Co Down. 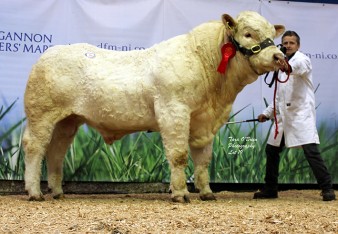 At the same price of 3,000gns Trevor Phair, Bellanaleck, Co Fermanagh was next to sell his yellow ticket winner Brogher Jack TI +48 SRI +51. James McKee, Kilkeel, Co Down was the man behind the money on this 16 month old son of Vexour Freddy.

The third lot to sell for 3,000gns was the reserve senior male championship from Stuart and David Bothwell, Ballina Mallard, Co Fermanagh with the December 2014-born Killadeas Joe. Gwenog Braveheart is the sire of this lad and his homebred dam Killadeas Gail goes back to the 16,000gns Blackford Dynamite, he journeys on to work at Newtownbutler, Co Fermanagh with Cyril Brown.

The first lot of the day was knocked down at 2,900gns to the new owner J Kane, Aghalee, Co Antrim. The April 2014-born Royaldowns Jetstream TI +58 SRI +58 shown by Mervyn McKeown, Crossgar, Co Down is a son of Alwent Goldbar.

Following on at 2,800gns was Kilturk Lucas from Patrick Grue, Kilturk, Co Fermanagh. This Cottage Devon sired lad was the youngest bull at the sale at 12 months and went home to Newtownhamilton, Co Armagh with Melvyn Watt. 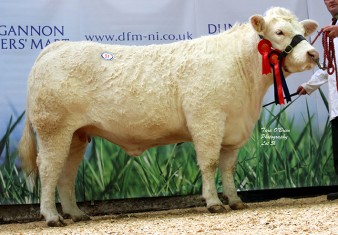 In the female section Stuart and David Bothwell exhibited the Female Champion which was the first to sell at 2,500gns. Killadeas Isla is a daughter of the 16,000gns Blackford Dynamite while her dam is the Oldstone Egbert-sired Killadeas Alpine. JP McCooey, Keady, Co Armagh was the man behind the money on this November 2013-born in-calf heifer. 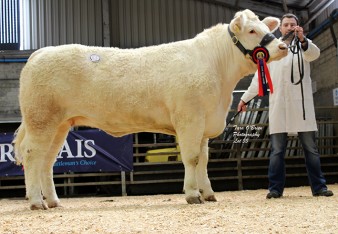 Jetset sets the pace at Stirling » « Charolais to 9,000gns at Welshpool