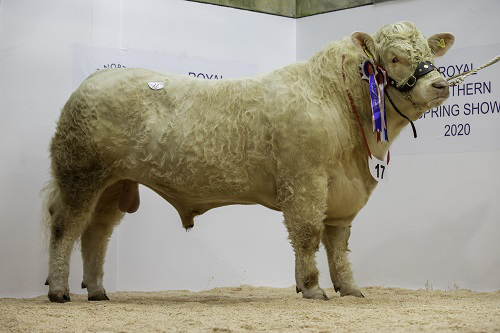 Charolais trade was led by a strong commercial interest at the Aberdeen and Northern Marts multibreed Spring show on Wednesday 26 February, where Charolais averages climbed by £481.25 from last year to £4,943.75 for the 12 bulls sold and bidding peaked at 6,800gns.

The supreme and breed champion was the top selling Charolais of the day, at 6,800gns. Bonnykelly Officer, a 20 month-old bull by the 10,000gns Carlisle reserve intermediate champion Gretnahouse Ivory, exhibited by Robert Leggat, New Pitsligo, Aberdeenshire, was snapped up by PAK Junor, Dores, Inverness-shire. His dam Bonnykelly Fern is sired by the 9,000gns New Deer show champion Newhouse Challanger.

Moments later the hammer came down at 6,200gns when A Anderson, Banchory, Aberdeenshire, raised his hand for the yellow ticket winner Lettoch Oxford. Out of the 14,000gns Highland show reserve male champion Goldies Banker daughter Ugie Giselda, and sired by the 11,000gns Stirling senior champion Balthayock Imperial, this June 2018-born lad was bred and exhibited by Colin Stuart, Ballindalloch, Banffshire.

Just behind, at 6,000gns, was another from the same home. Also placing third in his class at the pre-sale show, the 20 month-old Lettoch Oscar, who is also by Imperial but this time bred out of the Killadeas Dwane-sired Lettoch Jemima, was the pick of AW McArthur, Balfron, Glasgow.

Robert Leggat, New Pitsligo, Aberdeenshire, was another vendor in the money when his blue ticket winner and 19 month-old Bonnykelly Oliver, was knocked down at 5,500gns to Messrs Macivo, Thurso, Caithness-shire. The sire here is the 10,000gns Carlisle reserve intermediate champion Gretnahouse Ivory, and his dam Bonnykelly Fiona goes back to the 9,000gns New Deer show champion Newhouse Challanger.

The next highest priced at 5,000gns also came from Robert Leggat. Bonnykelly Orlando, a May 2018-born bull out of Bonnykelly Erin, a daughter of the 10,000gns Maerdy Rumbull is another sired by Gretnahouse Ivory. He goes on to work in Banchory, Aberdeenshire for C Smith.

Following on at 4,800gns when he caught the eyes of J and E Finnie, Newseat of Balthangie, Cuminestown, was another entry from the aforementioned Colin Stuart, who sold a total of three to average £5,590. Balthayock Imperial is the sire of the June 2018-born Lettoch Occasion and he is out of the Killadeas Dwane daughter Lettoch Little.

Two bulls then came under the hammer for 4,000gns, with the first being Auchincrieve Oblivion, a bull by Blelack Jeffrey, whose dam Auchincrieve Gaga is sired by the French-born Sang-D’or. J Baxter, Gamrie, Banffshire, was the man with his hand in the air as the hammer came down on this 23 month-old entry from Charles McCombie, Huntly, Aberdeenshire.

The other to match the 4,000gns price was the April 2018-born Kinclune Observer who stood second in his class earlier in the day for breeders and exhibitors John Wilson and Sons, Glenkindie, Aberdeenshire. Observer is sired by the 12,000gns Stirling supreme champion Goldies Ivan and his dam Kinclune Inga goes back to the 20,000gns Perth supreme champion Thrunton Crownprince. He stays local going home to Aboyne, Aberdeenshire, with new owner AJ Blackhall.

The only Charolais female forward was the June 2018-born Lettoch Oasis from Colin Stuart. A daughter of the 11,000gns Stirling senior champion Balthayock Imperial and out of Blelack Fleur, a Swalesmoor Bayonet daughter who was purchased at the Blelack dispersal sale in 2016, Oasis sold to C Smith, Strichen, Aberdeenshire, for 1,850gns.