Charolais sold the most bulls, had the highest average and best clearance rate of the spring round of the Stirling bull sales. There were 121 bulls sold representing an 83.5% clearance, with bull sales topping at 13,000gns and averaging £6,063. The heifer prices peaked at 5,800gns, while the dispersal of the Alsnow herd saw prices of up to 8,500gns for cows and calves.

Chief Executive of the Charolais Society peter Phythain commented that he was “Absolutely delighted with the sale, despite all of the doom and gloom in the industry at the moment and the uncertainty over Brexit, Charolais once again proved to be the sire in most demand”.

The top priced bull was the class winning Thrunton Nugget, a May 2017 born son of the homebred pairing Thrunton Gladiator and Thrunton Hoopla, who goes back to Thrunton Doubletop. He was offered for sale by JHC Campbell & Sons and purchased by Kevin Thomas, Newcastle Emlyn, Carmarthenshire for 13,000gns. 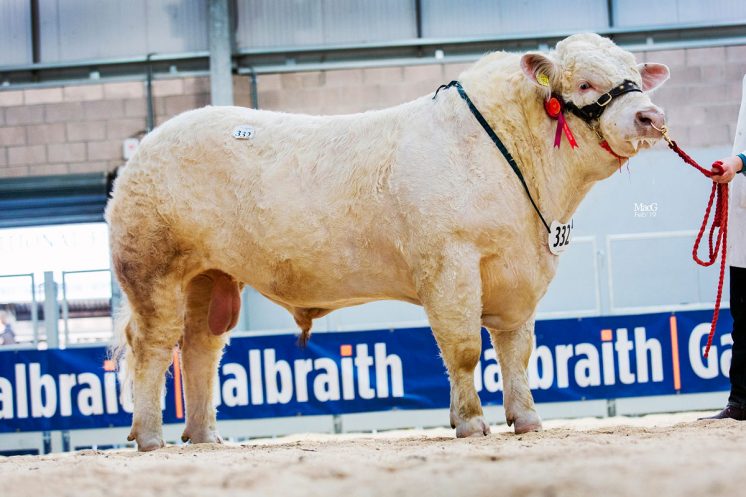 The Campbell family went on sell a total of four bulls to average £9896.25 and their next highest priced at 10,000gns was the 16 month old Thrunton Nike, who is also sired by Thrunton Gladiator but this time out of the 22,000gns Newhouse Bigal daughter Thrunton Exquisite and purchased by AJ Maclean, Scarinish, Isle of Tiree. 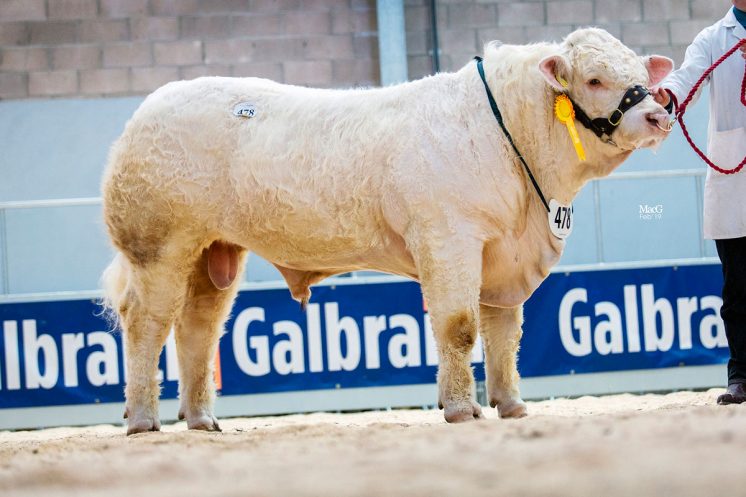 The Campbell’s other top seller Thrunton Nighthawk was snapped up by JW Hogg, Grifford, East Lothian, for 8,500gns. Nighthawk is a September 2017 born son of the 28,000gns Maerdy Jerusalem and Thrunton Gitane, a 20,000gns Perth supreme champion Moncur General daughter. 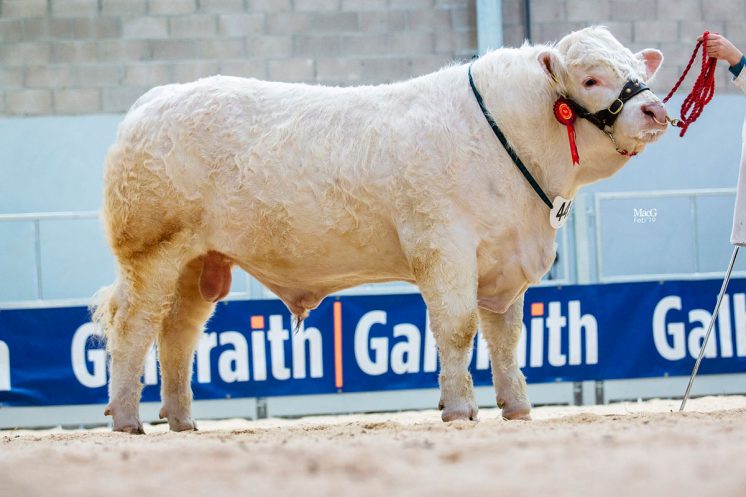 The presale senior champion was next in the trade stakes at 12,000gns. Inverlochy Nelson, a 21 month old, who was bred and exhibited by father and son team John and Raymond Irvine, Tomintoul, Banffshire, is sired by the Highland show supreme champion and Irish-born Kilbline 1 Instigator and out of Inverlochy Gypsum, a daughter of the Black Isle Show champion Lochend Apache. He goes on to work in Crawford, Lanarkshire, for Mr and Mrs JJ Wight. 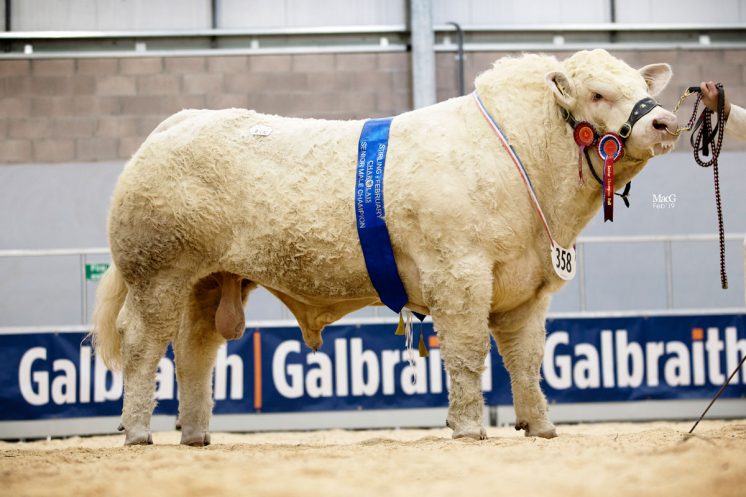 A trio of lots went under the hammer for the 11,000gns and the first was an entry from Alasdair Houston, Gretna Green, Dumfries-shire who caught the eye of T Smith and Son, Alford, Aberdeenshire, when he was tapped out first in his class at Monday’s pre-sale show. Gretnahouse Neverland, a June 2017 born son of Westcarse Jimmy, who has sired over 40 progeny in the herd since his purchase in 2016, is out of the Gretnahouse Ultimate daughter, Gretnahouse Daisy. 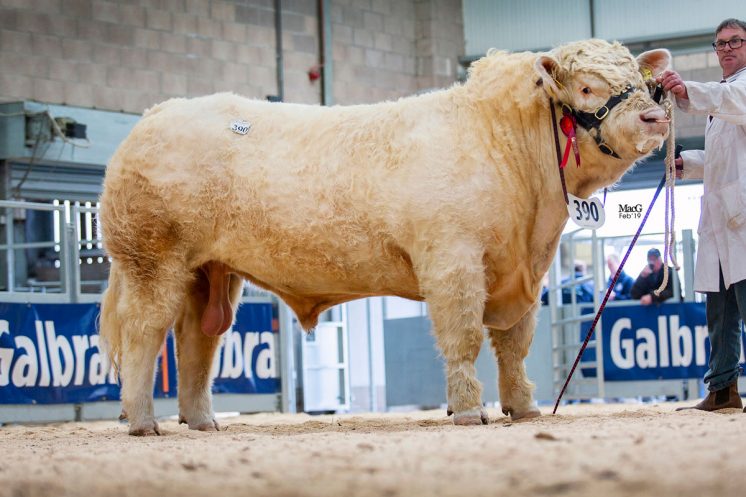 Mr Houston went on to sell another three bulls and averaged £8269 for the lot, with his next highest priced, the yellow ticket winner and June 2017 born Gretnahouse Nylon, also sired by Westcarse Jimmy and selling to H MacDonald, Advie, Morayshire for 8,500gns. He is bred out of Stobarts Fabulous, a 13,000gns Woodpark Bishop daughter. 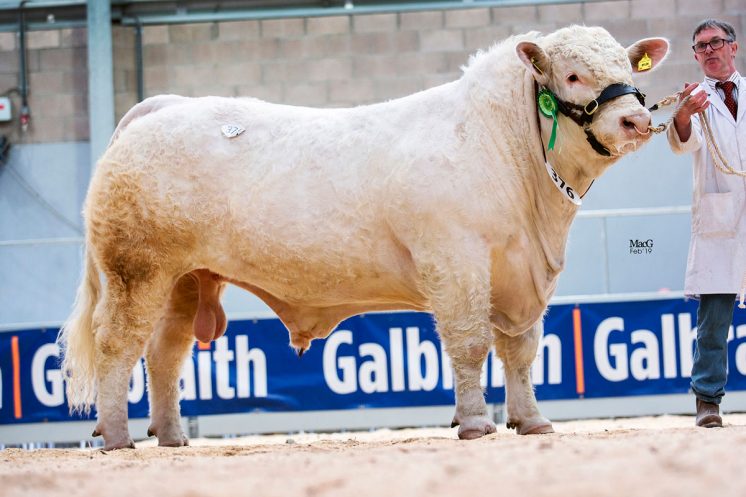 Matching the 11,000gns price tag and this time selling to JG Wilson, Glenkindie, Aberdeenshire, was the 18 month old Harestone Nighthawk who had also secured a red ticket at the previous day’s show. His dam is Harestone Brigette who goes back to the Royal Highland show supreme champion Harestone Ronsard, he is sired by the 12,000gns Balmyle Addition and was bred and exhibited by R and N Barclay, Insch, Aberdeenshire. 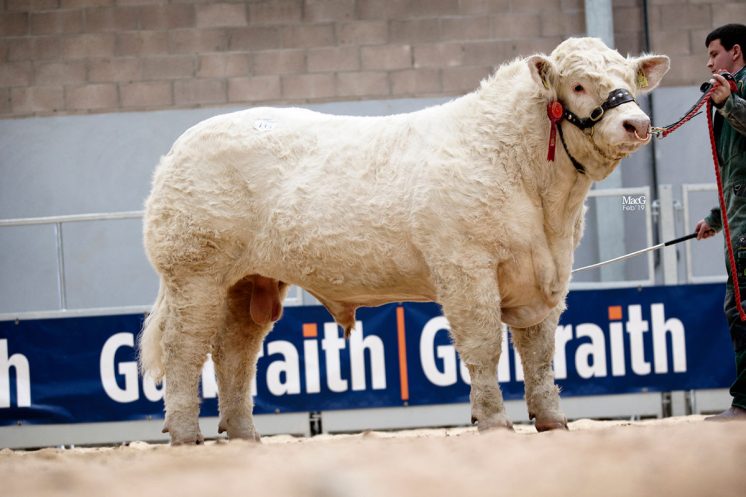 Goldies Navigation was another pre-sale show class winner purchased for 11,000gns, this time offered for sale by Hamish Goldie, Ruthwell, Dumfries-shire. An 18 month old son of the 15,000gns herd sire Gretnahouse Heman, who has bred over 120 progeny into the herd, Navigation is out of Goldies Hazel, a 12,000gns Goldies Elation daughter. GA Mackie, Rescobie, Angus, was the purchaser. 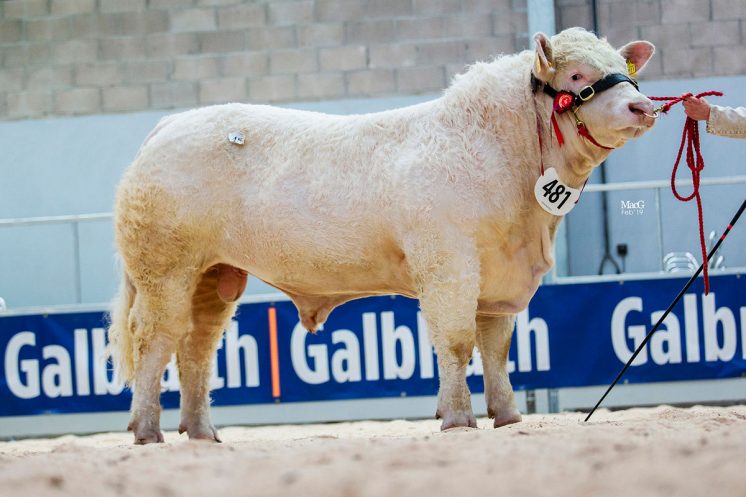 Up next and knocked down at 10,500gns was the blue ticket winner and September 2017 born Killadeas Noah from Stuart and David Bothwell, Ballina Mallard, co Fermanagh. Purchased by J Warnock, Broughton, Lanarkshire, he is sired by Blelack Blackberet and his dam is Killadeas Hazeline, a daughter of the 16,000gns Stirling supreme champion Blackford Dynamite. 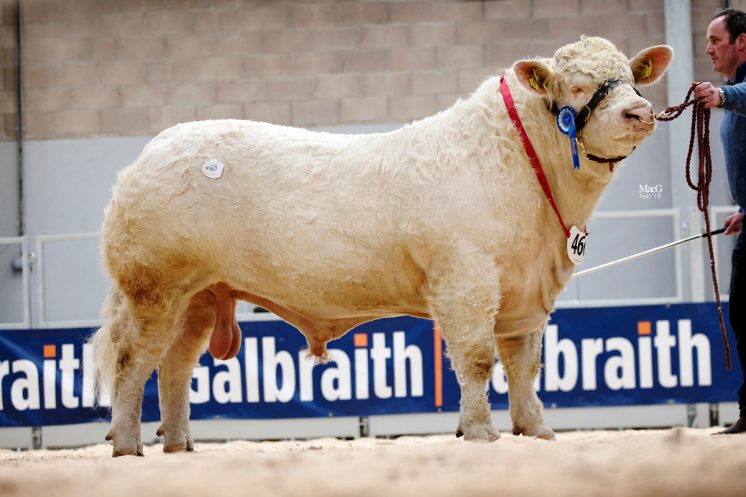 The aforementioned Hamish Goldie, who sold a total of 13 to average £7083, was the first to sell one of five 9,500gns priced lots, also sired by Gretnahouse Heman. This one was knocked down sold to A and J Wilson, Culsalmond, Aberdeenshire who bid off the competition to secure the class winning Goldies Nugget, a 20 month old out of Blelack Blackberet daughter Goldies Gilly. 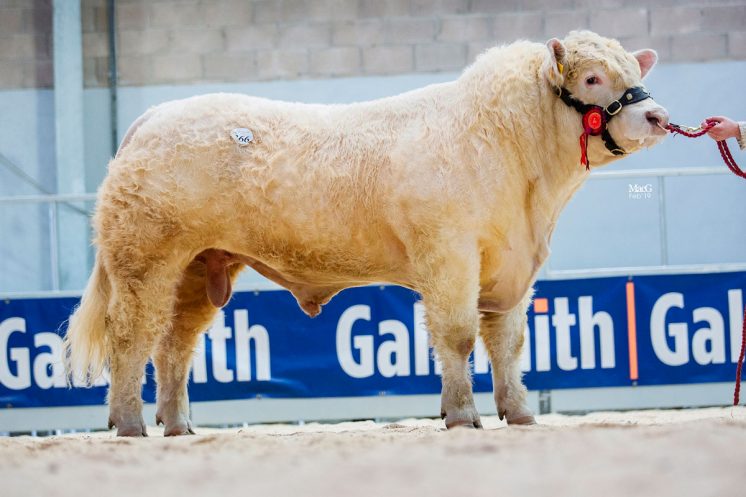 Mr Goldie went on to sell another 9,500gns lot, the 15 month old Goldies Noelle. This time sired by the homebred Goldies Formidable and out of another Blackberet daughter – Goldies Eclair, he was purchased by Adrian Ivory, Meigle, Perthshire. 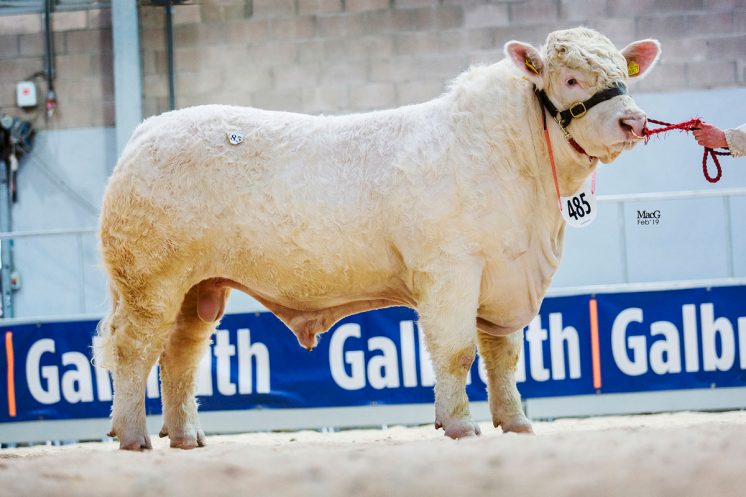 The next 9,500gns lot was one of 17 bulls presented by Major Walter, Balthayock, Perthshire, which averaged £6850. Balthayock Nominee who was purchased by CD Timm, Appleton Roebuck, Yorkshire. Sired by the homebred and 64 time father Balthayock Impression, the June 2017 born Nominee is out of Balthayock Japonica who goes back to Barbican Lancer. 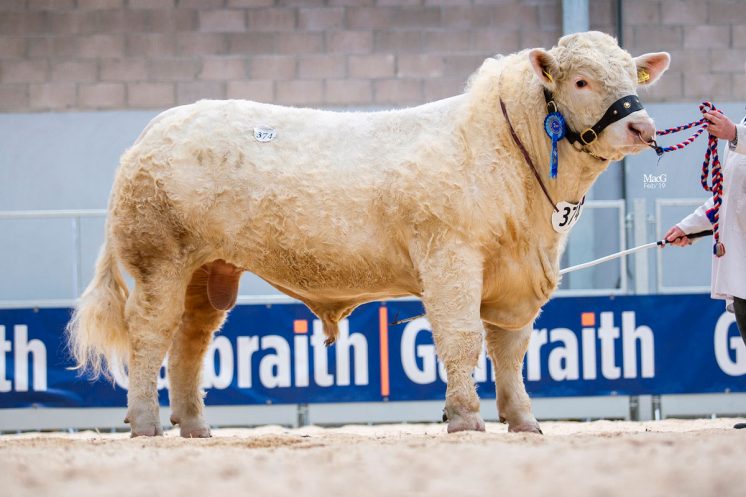 The reserve supreme and intermediate champion was also offered for sale by the Major. Balthayock Nanook, a 19 month old son of Highland show champion Balthayock Imp who has previously sold sons to 19,000gns and Barbican Lancer daughter Balthayock Gemma, goes on to work in Dundee for WJ Millar of Tealing, who purchased him for 9,500gns. 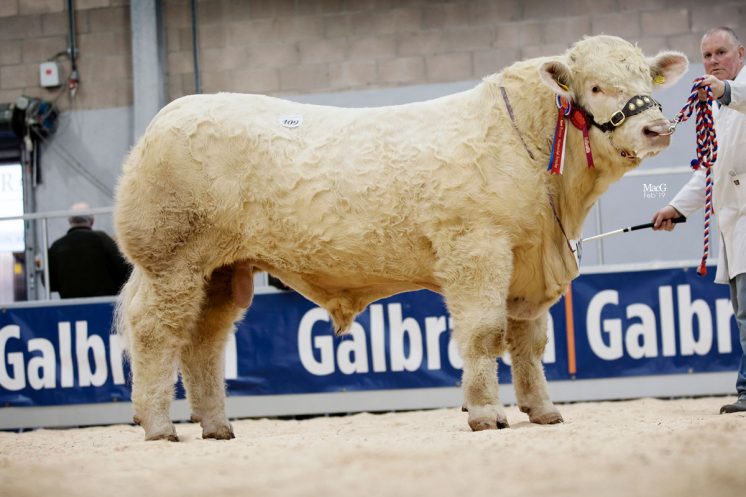 The Major’s other two top priced lots both commanded bids of 8,500gns, the first being a May 2017 born blue ticket winner who was purchased by CA Smith, Tarland, Aberdeenshire. Balthayock Newton is again sired by Balthayock Imp but this time out of Balthayock Heloise who goes back to Swalesmoor Cracker. The second was the June 2017 born Balthayock Nuffield, out of another Cracker daughter – Balthayock Heroine, he is sired by the Royal Welsh show and 20,000gns Maerdy Grenadier and sold to Shanry Farms, Rait, Perthshire. 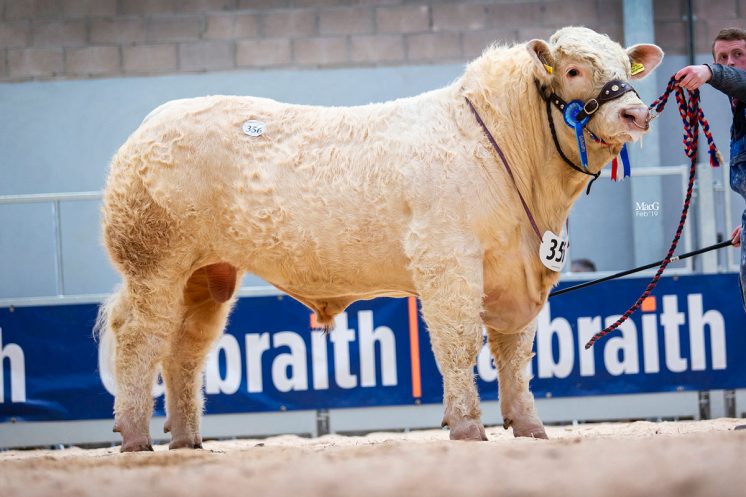 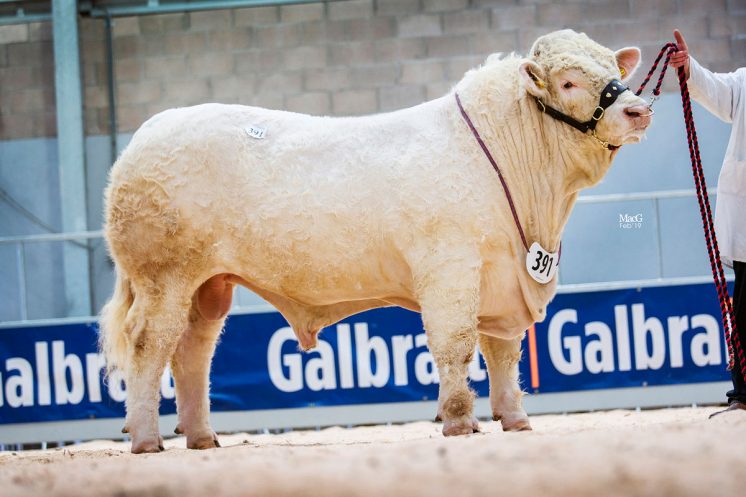 The last 9,500gns bull was Woodpark Neptune, an 18 month old by the Irish-bred Deeside Guillver who has gone on to add 94 progeny to the British herd book. His dam Woodpark Izzy is in turn sired by the 19,000gns Perth reserve junior champion Corrie Alan and he came all the way from Beragh, Co Tyrone with breeder and exhibitor Will Short to go home with D Munro, Kingussie, Inverness-shire. 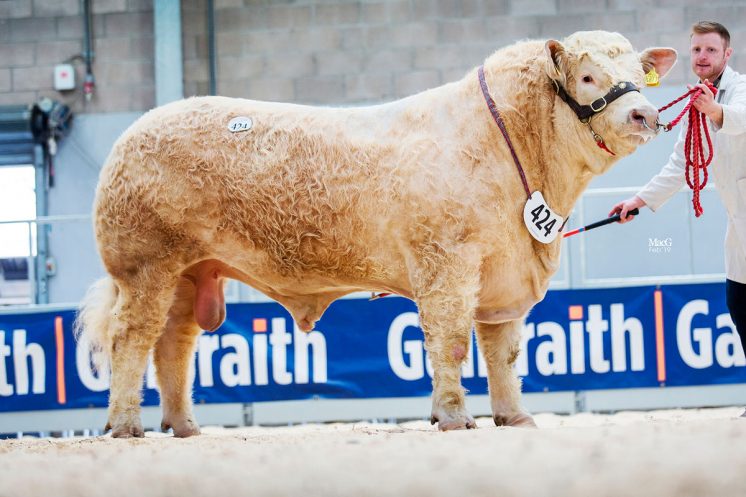 Main sale females topped at 5,800gns for the twelve month old Formakin Opal from the McMurrich Partnership, Causewayhead, Stirlingshire. Sired by the French-bred Hercule and out of the Balthayock Matthew daughter and Stars of the Future class winner Formakin Licorice, she was purchased by the Rettie partnership.

Hamish Goldie also had heifers for sale, the highest priced of which made 4,500gns when she was purchased by DP Daniel, Maxworthy, Cornwall, who also went on to buy another of Mr Goldies lots for 3,800gns. The 23 month old Goldies Nell was the first, a Blelack Blackberet daughter out of Goldies Lynn, who in turn is sired by the 15,000gns Gretnahouse Heman. Which was followed by the female champion Goldies Nina who is a March 2017 born daughter of the 14,000gns Goldies Joss and Goldies Jollygood. 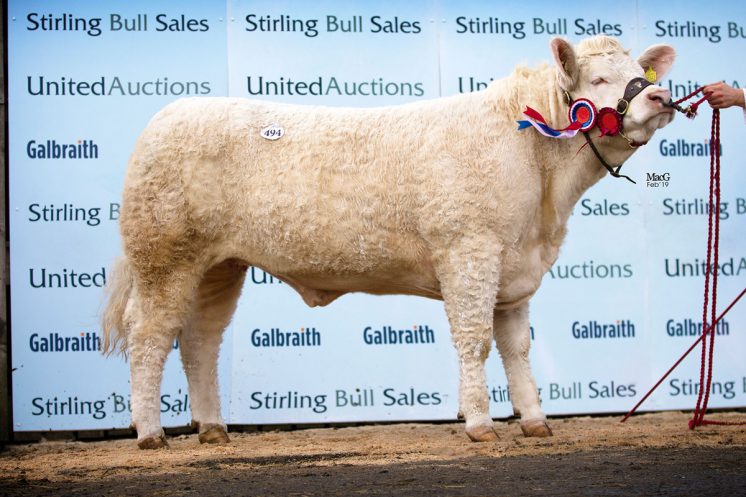 The sale featured the dispersal of the Alsnow herd of Alan R Lawson & Son whose females sold to a top price of 8,500gns for Alsnow Enchantress and her female calf at foot Alsnow Olwen. Enchantress has produced two RHS class winning daughters and is sired by Blelack Roger, while her dam is Alsnow Victoria who goes back to the 25,000gns Perth supreme champion Thrunton Socrates. Her daughter five month old Olwen is sired by Blelack Immaculate and the set were purchased by the above mentioned N and R Barclay, who went on to purchase another of the Lawson family’s lots.

Their next highest priced lot sold in a two-way split at a total of 6,800gns, with the 2014 born cow Alsnow Jazzygirl heading on to Hexham, Northumberland with G Grieve, while her April 2018 born bull calf Alsnow Oscar was sold to FR Walton, Morpeth, Northumberland. The triple calving Jazzygirl is a daughter of the 10,000gns Puntabrava Federico and out of a Blelack Roger daughter Alsnow Dixie and Oscar is sired by Alsnow Hurricane.

Just behind at 6,500gns was the cow and seven month old bull calf outfit Alsnow Hanna and Alsnow Oak. NA Wattie was the purchaser of the pair and takes them home to his Aberdeenshire unit. Hannah, a 2012 lass by the 16,000gns Stirling junior champion Clyth Diplomat is out of the aforementioned Enchantress and her son is sired by Cottage Devon. 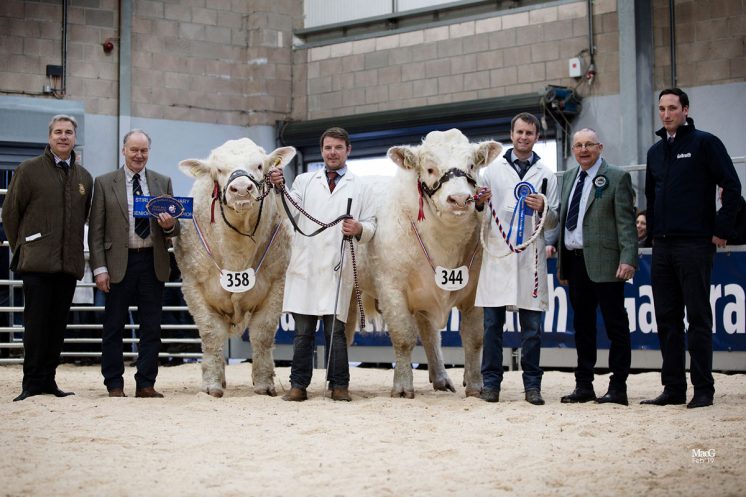 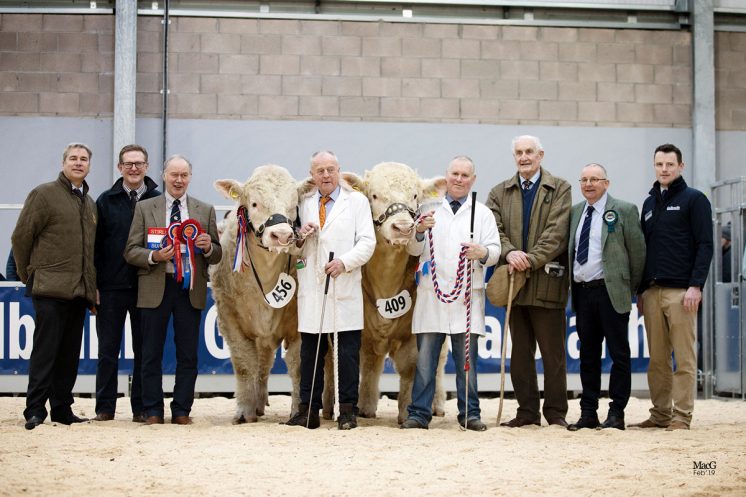 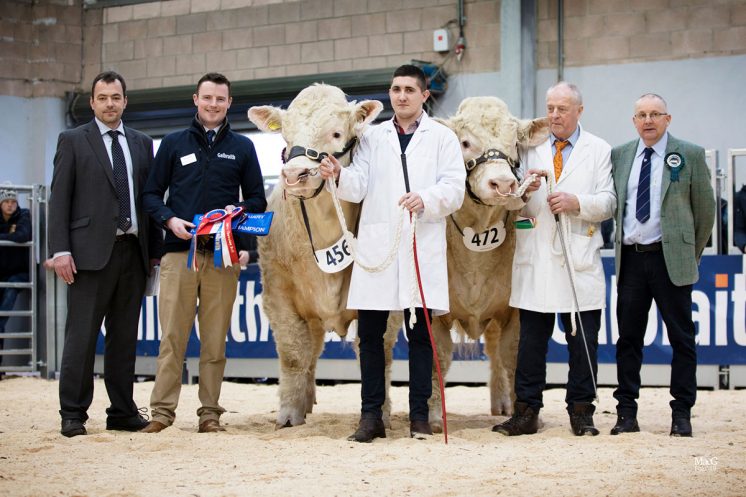 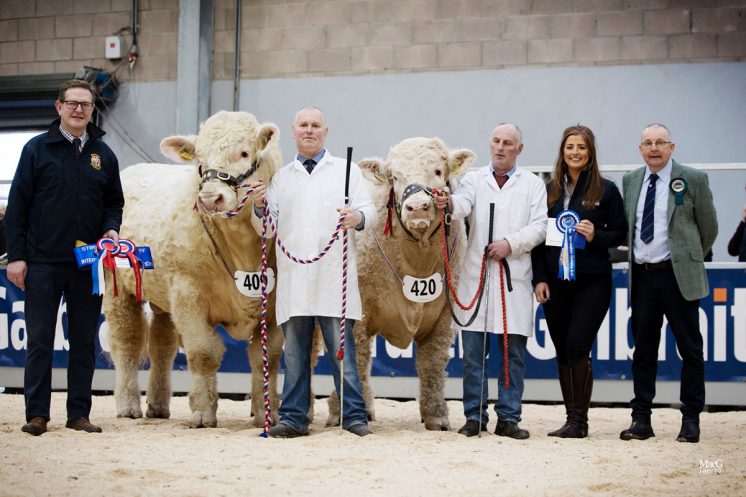 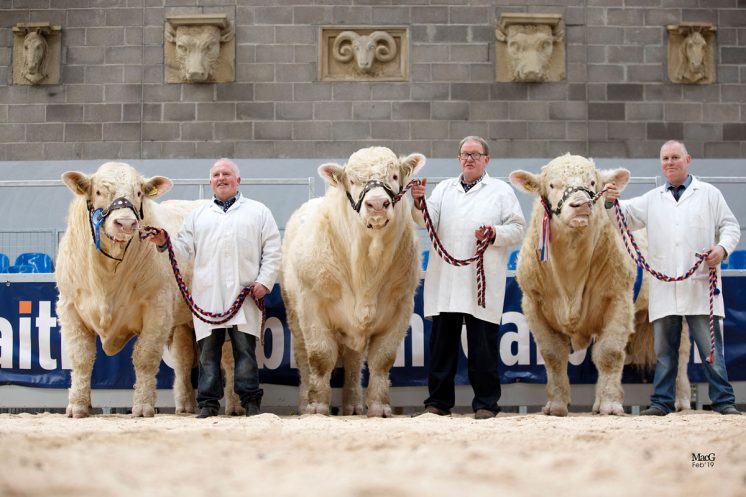 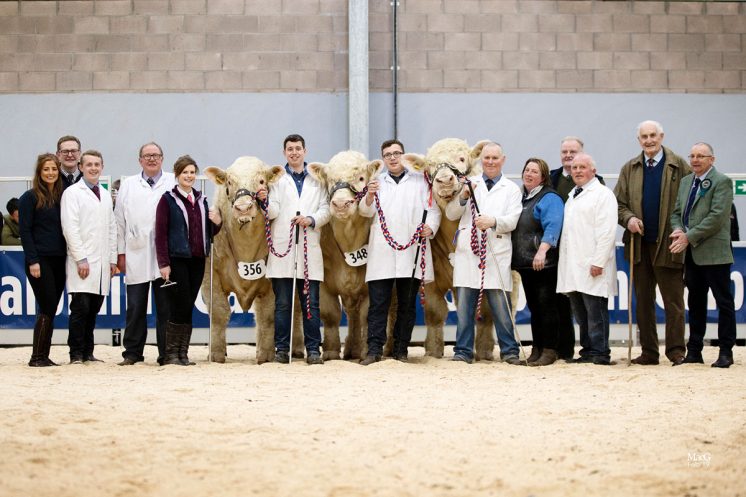 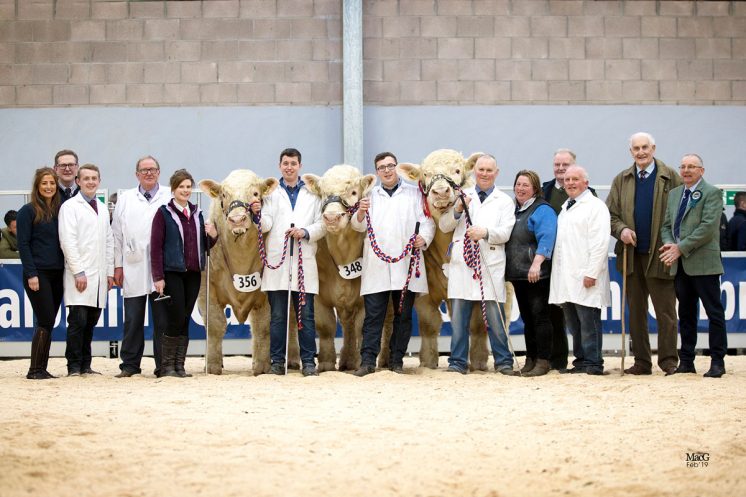