The ring was packed to the rafters at Swatragh Mart, for the inaugural Northern Ireland Charolais club sale evening on Friday 1 June, where 11 bulls sold to an average of £2,711 and a clearance of 79%. 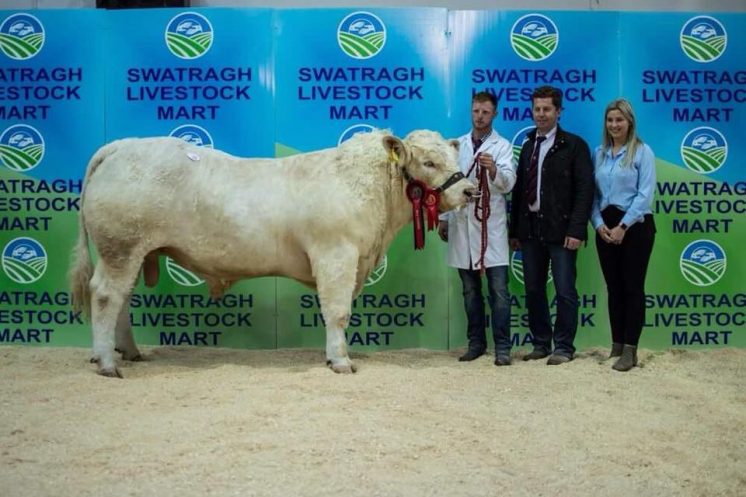 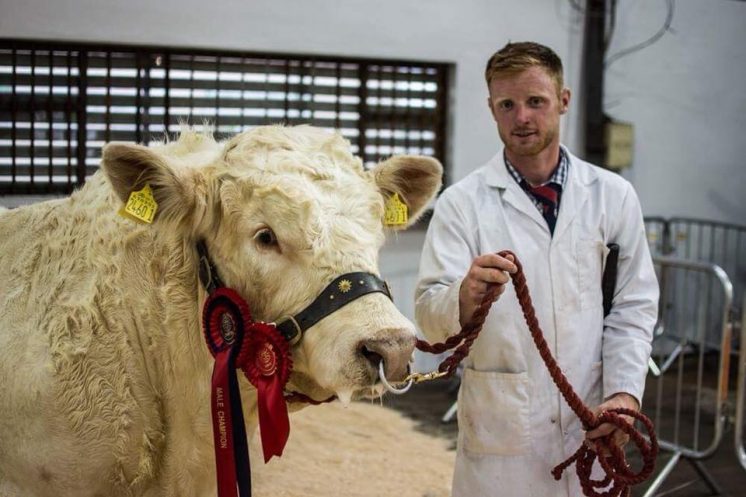 Leading the bull bids at 4,000gns was the pre-sale show supreme and male champion from Will Short, Beragh, Co Tyrone. Champion Woodpark Magnum, who is a 16-month-old son of Deeside Gulliver and the homebred 19,000gns Doune and Dunblane champion Corrie Alan-sired Woodpark Hattie, was purchased by Noel McIlwaine, Plumbridge, Co Tyrone.

Securing 2,900gns for breeder and exhibitors Michael and Gerard McShane, Articarvin, Co Tyrone, was the 17-month-old Altnaderog Nero. Nero, who is out of the southern Irish-bred dam Deeleview Isabelle, who goes back to Pirate, and is sired by the 12,000gns Maerdy Fiend went on to Ballynahinch, Co Down, to work for Mervin Murphy.

Next to go, this time consigned by Harold Stubbs and Alan Burleigh, Crummy, Co Fermanagh, was Melvin Nathan, who earlier in the day had been tapped out third in his class by judge Gary Henderson. This 15-month-old, sired by Whitecliffe James and out of the Dartonhall Givenchy daughter Melvin Janet, was knocked down sold for 2,700gns to JP and James McKeagney, Maghera, Co Derry. 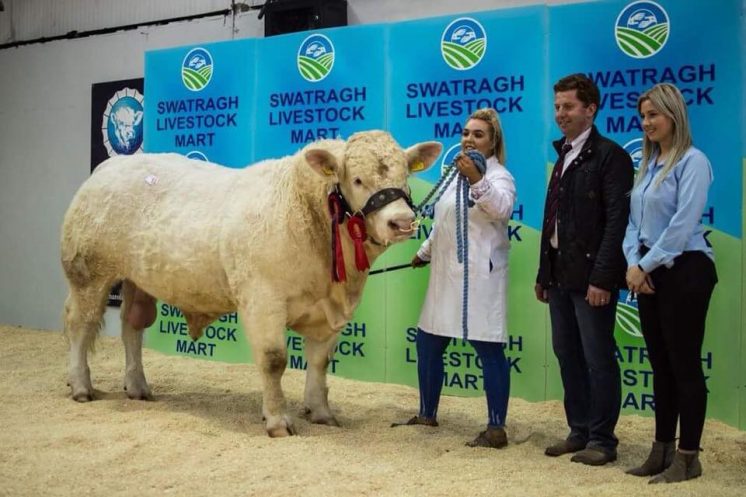 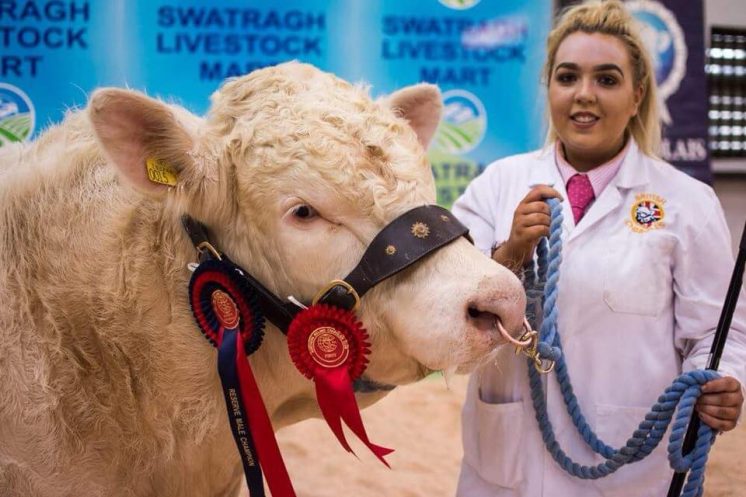 The very next lot to sell was the reserve supreme and reserve male champion Lurgancot Narcos who was purchased by David Thompson, Goshaden, Co Derry at 2,600gns. Rory McKeever, Kilmore, Co Armagh was the consigner of the February 2017-born Narcos, who is bred out of the Cottage Devon-sired Lurgancot Helga and by the 25,000gns Stirling intermediate champion Inverlochy Ferdie.

Next in the trade stakes was a blue-ticket winner and 16-month-old from the aforementioned Will Short, who is again sired by Deeside Gulliver but this time out of Annagh Connie, another Corrie Alan daughter. Woodpark Maverick sold to Michael McNally, Portadown, Co Armagh for 2,400gns.

Just behind at 2,300gns was the class winner Fury Nevada. Sired by the Irish-bred Crossmolina Euro and bred out of the 18,000gns Perth intermediate champion Fury Action daughter Fury Diamond, the March 2017-born Nevada was bred and exhibited by Pat Hackett, Clogher, Co Tyrone and purchased by Alan Farlow, Garvagh, Co Derry.

Just a few lots earlier, a 16-month-old entry from Kenneth Veitch, Lisbellaw, Co Fermanagh, was sold in a 2,200gns deal to Eamon Caldwell, Claudy, Co Derry. Drumlone Nobleman, who placed second in his class at the pre-sale show is a son of the Southern Irish-bred Goldstar Gentleman and the Texan-sired Drumlone Isla.

A trio of bulls were knocked down at 2,000gns a piece with the first coming from Mervyn McKeown, Crossgar, Co Down. Royaldowns Mercedes is sired by Rowandale Dancer who has bred over 30 progeny into the herd since 2016, while his dam is Royaldowns Daisy, a Allanfauld Velocity daughter and the 19-month-old caught the eye of William McCann, Ballymena, Co Antrim.

Also commanding a 2,000gns bid and from the same home, but this time from Richard Fulton, Dungiven, Co Derry, was the very next lot, Royaldowns Mascott. The October 2016-born
Mascott boasts an impressive pedigree being sired by the proven easy calving and short gestation Blelack Digger, while his dam is Royaldowns Icemaiden, a daughter of the 55,000gns Royal Show supreme champion Thrunton Voldemort. 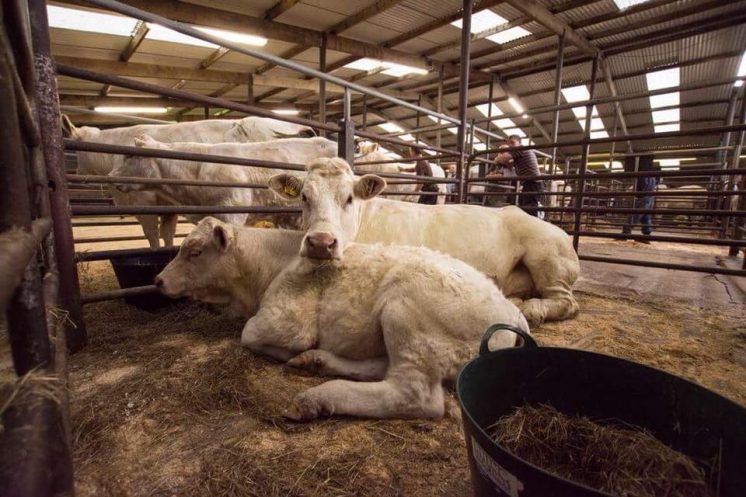 Two sets of cows and calves were exhibited by James McGuigan, Maghera, Co Derry and the first set was purchased for a total of 4,160gns by Jonathan Crawford, Maghera, Co Derry. Mother, Carnview Henrietta ET, a five-year-old daughter of the 55,000gns Balmoral Interbreed champion Sportsmans Columbo and the 10,800gns Beechdale Uplift-sired Coolnaslee Antonia, was purchased along with her six-month-old bull calf Carnview Noah, who is sired by Whitecliffe James.

Mr McGuigan’s other cow and calf outfit were sold as a spilt lot. The six-year-old Carnview Honey ET, who is bred the same way as Henrietta, secured 1,200gns from Patsy Bradley, Maghera, Co Derry, and her six-month-old bull calf Carnview Nobby, who is sired by Davally Illusion, was purchased for 800gns by B McKeever, Kilmore, Co Armagh.

The top priced heifer at 1,365gns was the day’s reserve female champion Royaldowns Missy, another by the aforementioned Blelack Digger, she is out of Royaldowns Jenna who in turn is sired by the 25,000gns Stirling intermediate champion Inverlochy Ferdie. The 19-month-old Missy was bred and exhibited by Mervyn McKeown, Crossgar, Co Down and moves down to the South with purchaser Anthony Rabbett, Muff, Co Dongal. 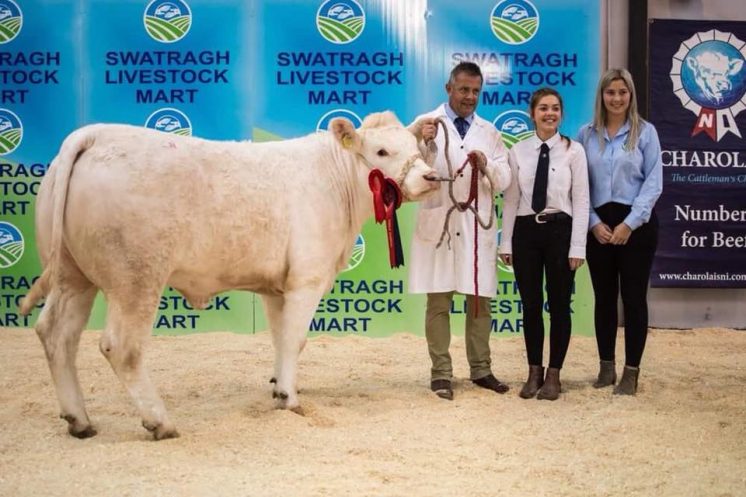 The only other heifer on offer was another from Mervyn McKeown who had been crowned female champion in the pre-sale show and this time purchased by Michael J Quinn, Dunamore for 1,200gns. Royaldowns Millie, is a June 2016-born daughter of Rowandale Dancer and the Omagh Show champion Roundhill Ohoh-sired Royaldowns Carolanhe.