Leading the bids at 13,000gns was a yellow ticket winner from Bill Bruce, Meigle, Perthshire, who also had the day’s leading average of £10,150 for his three bulls. The 13-month-old Balmyle Neptune, who is sired by the 28,000gns Perth supreme champion Brampton Nacodar and out of Balmyle Image, who goes back to the 22,000gns Balthayock Diplomat, was purchased by Will Palmer and Son, Truro, Cornwall. 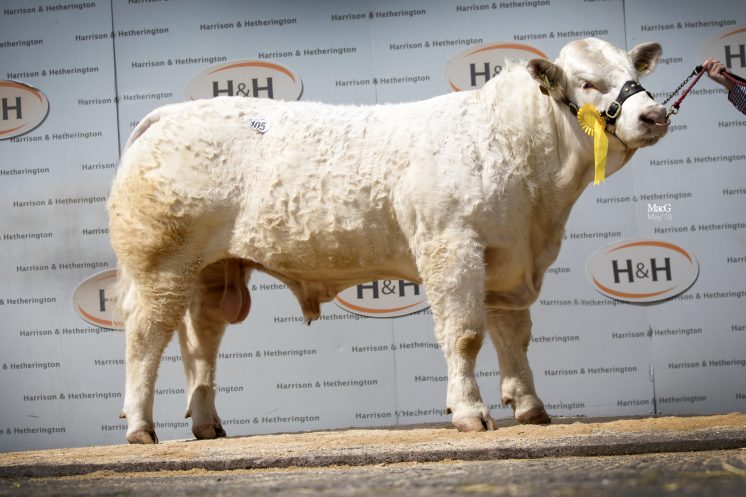 Mr Bruce’s other top price offering was the February 2017-born Balmyle Nugget who had been tapped out first in his class at the pre-sale show and took the fancy of Mark Ross who paid 11,000gns to take him home to Gorebridge, Midlothian. Nugget’s dam Balmyle Juliet is a daughter of the 20,000gns Perth reserve junior champion Balmyle Magnate, while his sire is the 31,000gns Carlisle supreme champion Whitecliffe Highlight. 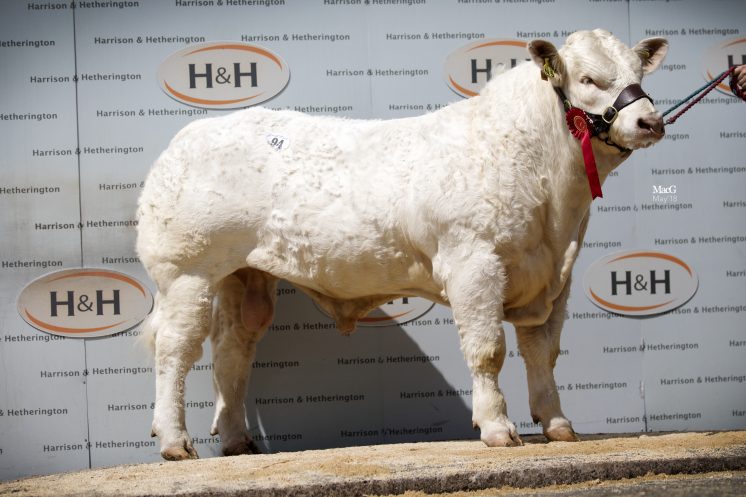 A trio of bulls sold for the next highest price of 10,000gns and the first was the class winner Elgin Marvel, a son of the 14,000gns Westcarse Houdini and the 15,000gns Royal Highland Show reserve supreme champion Edenhurst Cognac-sired Elgin Isobelle. The 18-month-old Marvel was purchased by AJ MacGregor, Lockerbie, Dumfries-shire and offered for sale by breeders Roy and Matthew Milne, Lhanbryde, Elgin. 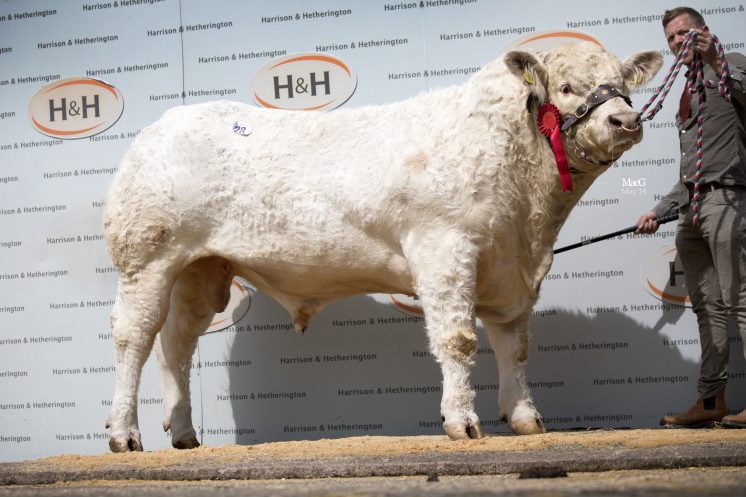 The second to sell at the 10,000gns price tag was the reserve supreme and intermediate champion from Archie Macgregor (Allanfauld) Ltd, Kilsyth, Glasgow. Allanfauld Napoleon, who was awarded reserve champion at Stars of the Future Calf Show in November, is a January 2017-born son of the 30,000gns Dingle Hofmeister and out of the home-bred Allanfauld Empress, a daughter of the French-bred Harestone Tyrol. DG McKenzie were the successful bidders and take him home to their Aberdeenshire-based unit. 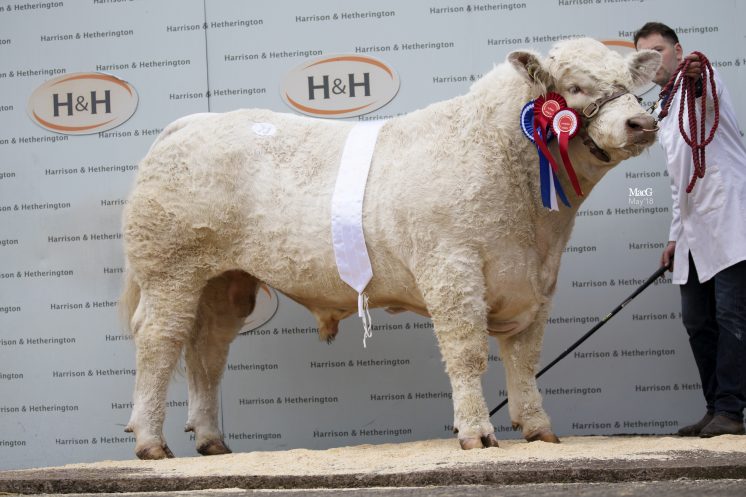 Charles McCombie, Huntly, Aberdeenshire, was the next to purchase a 10,000gns lot. Mornity Nimbus, a 13-month-old from Jack Nicoll Farms Limited, Alyth, Perthshire, is by the 14,000gns Westcarse Houdini and his dam is the Balnuith Universe-sired Mornity Dilly. 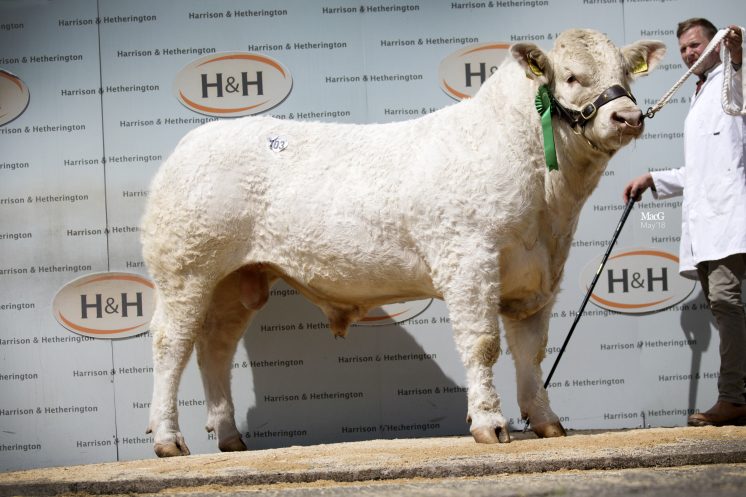 The blue-ticket winner Caylers Merlin, was the first of three to be knocked down at 9,000gns. The Barker family, Caylers Charolais, Nuthampstead, Hertfordshire, were the consigners of the December 2016-born Merlin, whose breeding includes the 12,000gns Maerdy Fiend and Caylers Juniper, a 10,000gns Thrunton Goldeneye daughter. J Nelson, Castle Douglas, Kirkcudbrightshire, was the successful bidder. 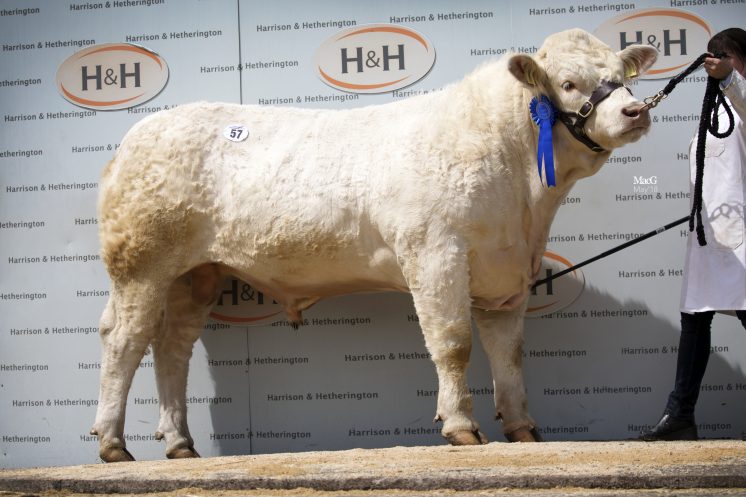 The Barker family had another successful day on the back of their solid trade at Welshpool a fortnight ago and this time traded five lots which averaged £5,775. Their other top priced lot was purchased by J Brown, Kirkgunzeon, Dumfries-shire for 6,000gns. Caylers Nelson, a 13-month-old is sired by the Irish-born Rosanne Jupiter and out of Caylers Gytha who goes back to Thrunton Dominator.

The next 9,000gns lot was presented by Jonathan Watson & Co, Bowsden, Northumberland, who also had a good day selling a total of three to average £6,755. Tweeddale Nenuphar who stood second in his class at the previous day’s show is out of the Tattenhall Impeccable daughter Lakenheath Ellen and is sired by the 14,000gns Stirling reserve junior champion Goldies Decider. The 16-month-old Nenuphar, was purchased by A Wallace and Co, Newton Stewart, Wigtownshire. 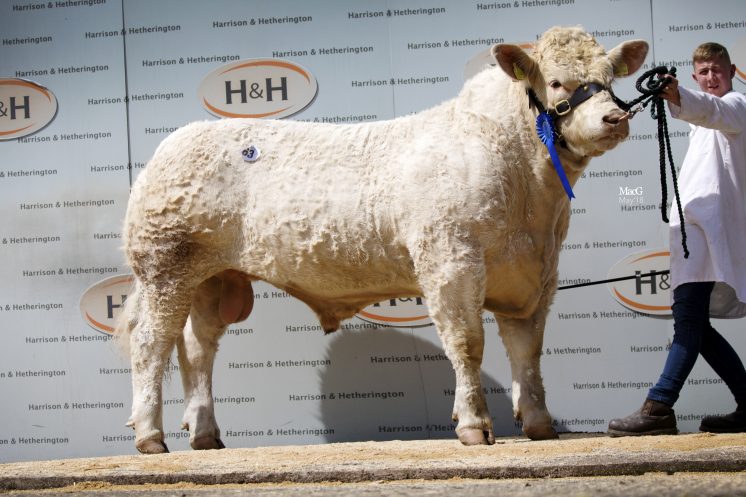 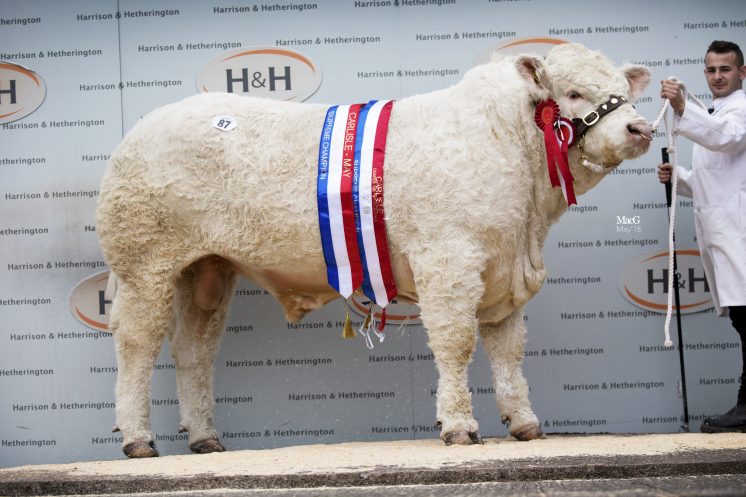 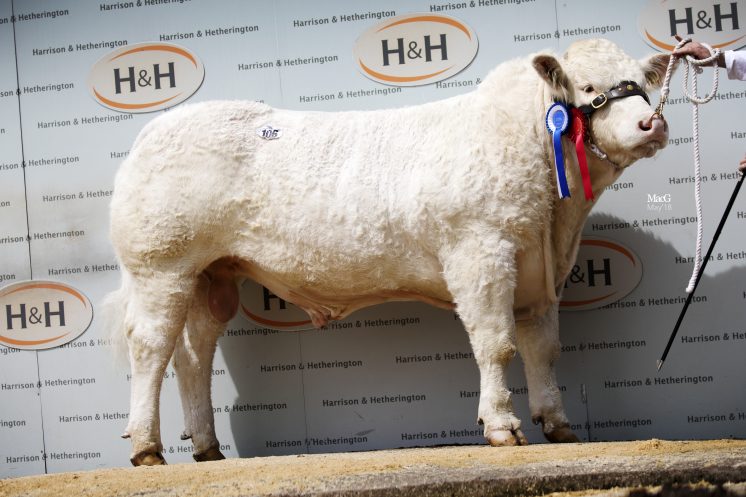 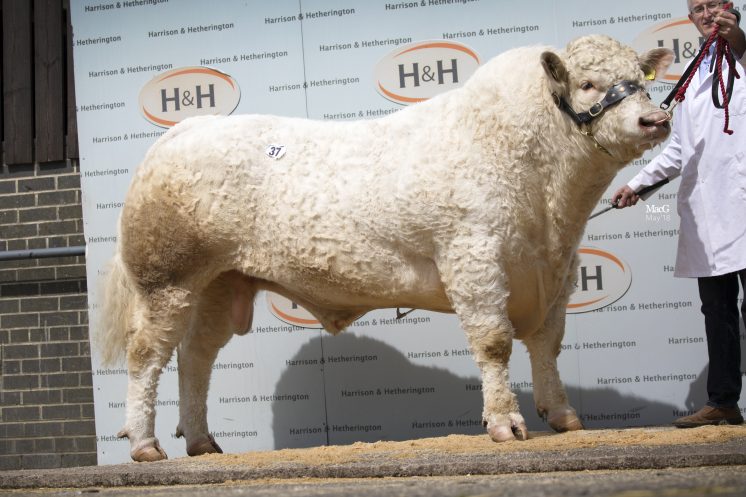 Two animals sold for the next highest price of 7,000gns and the first was another from Mr Houston. Gretnahouse Major, who is sired by the 17,000gns Balthayock Gladiator who also bred the 25,000gns Gretnahouse Lord, placed second in his class at the pre-sale show. His dam Gretnahouse Hayesse is a Wesley Equinox daughter and the November 2016-born Major was purchased by A Smellie, Peebles, Roxburghshire. 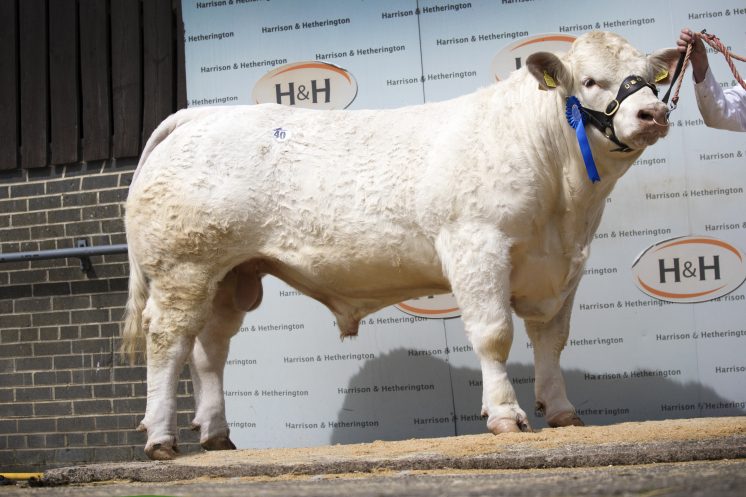 Another to bring 7,000gns when chapped down to George and Sheena Coghill, Birsay, Orkney was Ian and Dorothy Goldie’s reserve senior champion and July 2016-born Solwayfirth Mailman from Cummertrees, Dumfries-shire. Solwayfirth Hannibal is the sire here and his dam Solwayfirth Foxy is by the aforementioned Dingle Hofmeister. 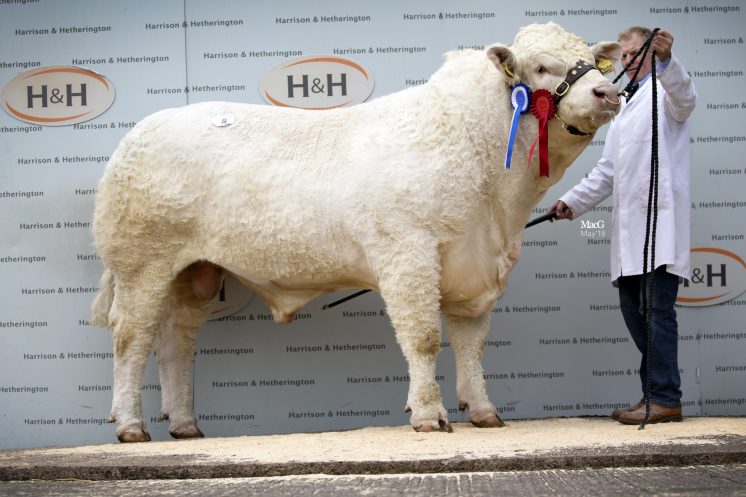 The Goldies went on to sell three more and averaged £5,381 for the bunch. Their other top priced lot was the November 2016-born class winner Solwayfirth Milo, a son of home-bred couple Solwayfirth Javelin and Solwayfirth Jaylo, who was purchased by the Clints Farming Partnership, Heriot, Midlothian for 6,000gns. 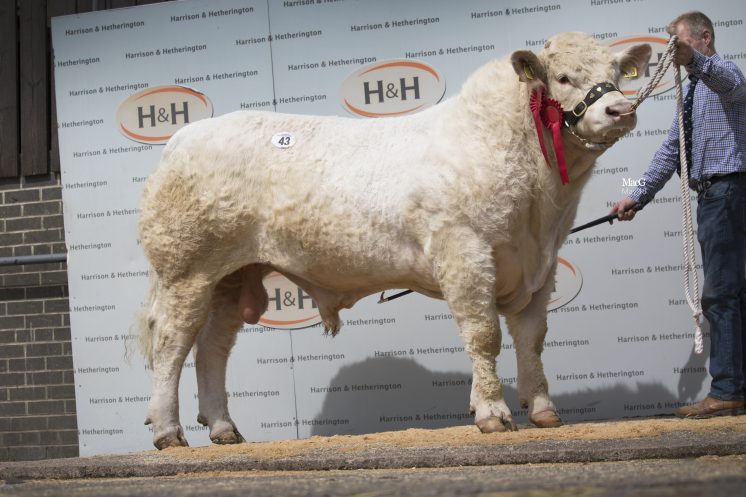 Another from Northumberland breeders Jonathan and Jane Watson was next highest priced at 6,500gns. This time bred out of Blelack Digger daughter Tweeddale Icecream and sired by Balthayock Darcy, the 17-month-old Tweeddale Manwell goes home to work in Crocketford, Dumfries-shire, for the Glenkiln Farm Partnership.

The star of the female section was the 15-month-old Crookdake Nightingale from David and Sharon Miller, Waveton, Cumbria, who not only secured the top price of 4,000gns but was also crowned female champion. Nightingale is by the French-bred Vald’or-Ra and out of Crookdake Diamond, herself sired by the 25,000gns Perth supreme champion and Royal Highland show junior champion Goldies Unbeatable. She was knocked down to Pembrokeshire breeders DR and RL Bowen of Molleston who went on to purchase two more female lots. 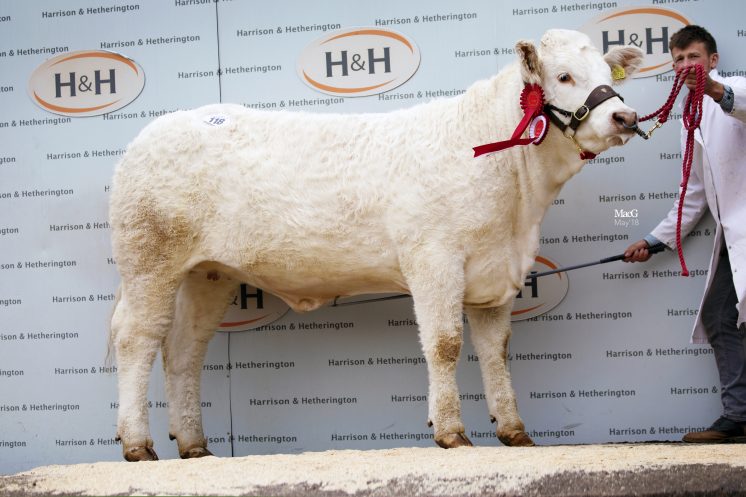 Their next purchase at 2,900gns was the reserve female champion Holtstead Misshalfpenny, whose dam is the 15,000gns Carlisle supreme champion Burradon Talisman daughter Holtstead Halfpenny and she is sired by Wesley Equinox. The 27-month-old Misshalfpenny was bred and consigned by Fred, June and Emma Andrews, Holmfirth, Yorkshire.

One of Hamish Goldie’s females, Goldies Melissa also caught the eye of the Bowen family. Balthayock Influence is the sire of this 24-month-old and her dam Goldies Angelina goes back to the above-mentioned Goldies Unbeatable.

Also amongst the top priced females at 3,000gns was another entry from the Watson family of Bowsden, Northumberland. Tweeddale Missholly, a 16-month-old by Tweeddale Justthejob and out of the Blelack Blackberet-sired Tweeddale Jemdeholly was purchased by Tom Story, Canonbie, Dumfries-shire. 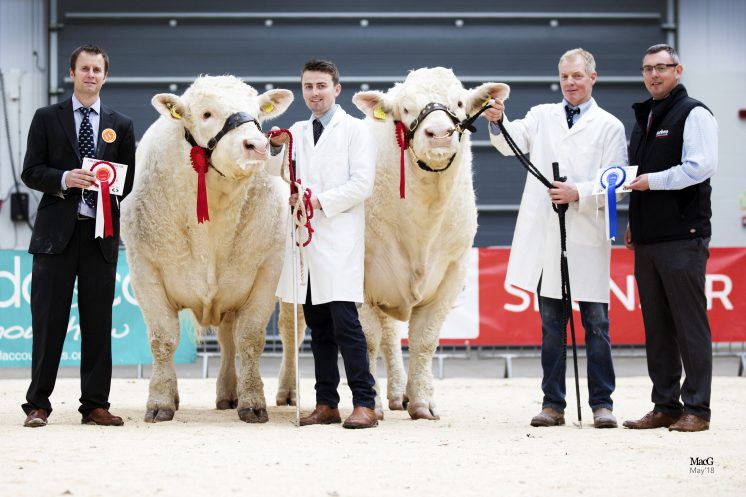 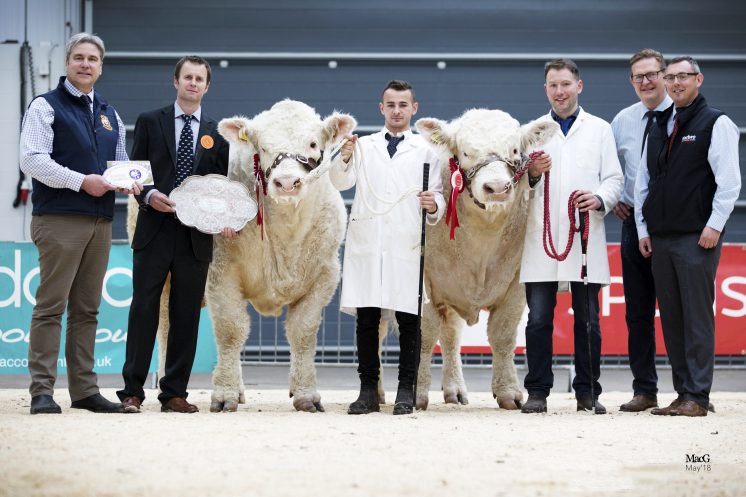 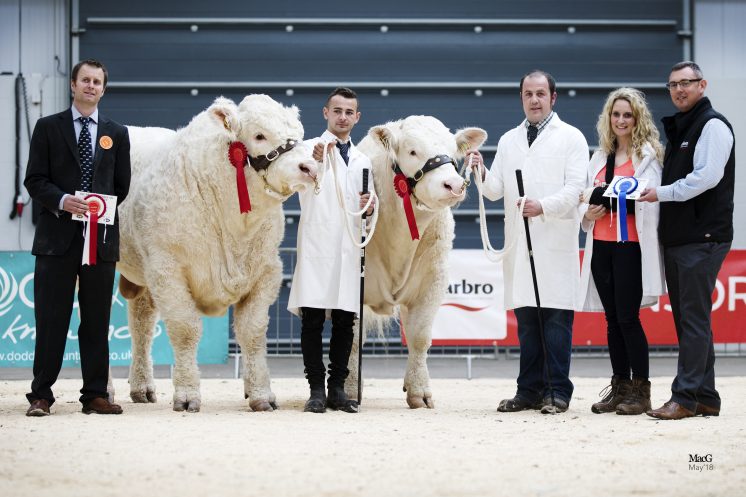 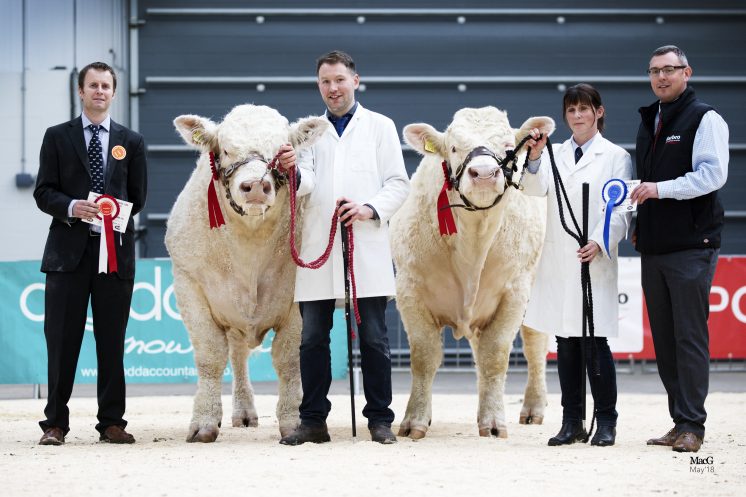 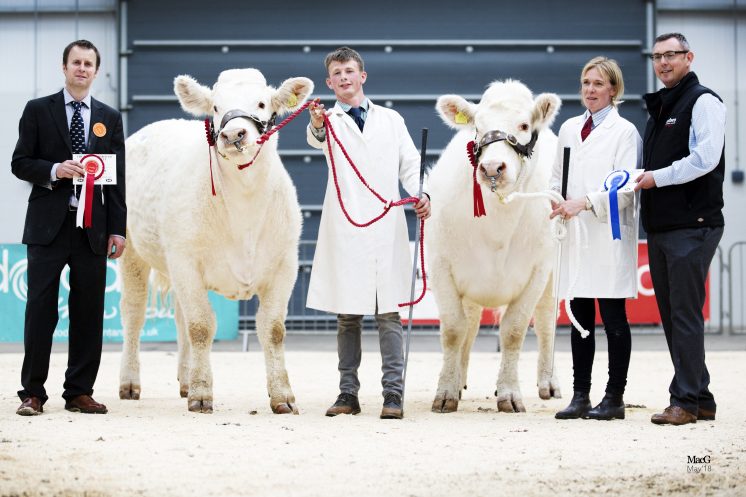