There was great trade for Charolais at the Northern Ireland Charolais Club sale at Dungannon on Friday 16 March. The sale which had been postponed due to the bad weather at the beginning of the month, saw an 86% clearance, a 9% increase on last year. The 38 bulls averaged £3,285 which was up from last year’s equivalent by £367 for five more sold. 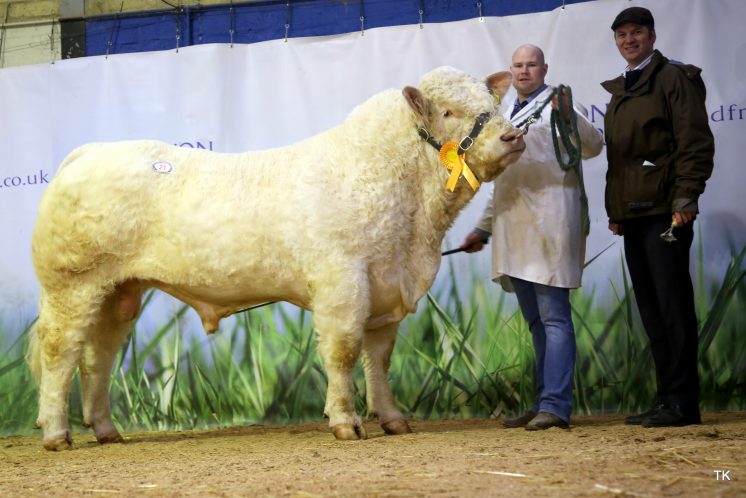 Leading the pack at 5,600gns and 5,000gns respectively were a couple of crackers from Jonathan Crawford, Maghera, Co Derry. The first Coolnaslee Manager, had been tapped out third in his class at the pre-sale show and caught the eye of O Jeffers, Cookstown, Co Tyrone. The August 2016-born Manager is sired by the 10,000gns Carlisle supreme champion Ratoary Ferguson, while his dam is the 30,000gns Dingle Hofmeister daughter Edenhurst Hrh, who was purchased from the Edenhurst dispersal in October 2015 for 8,000gns. 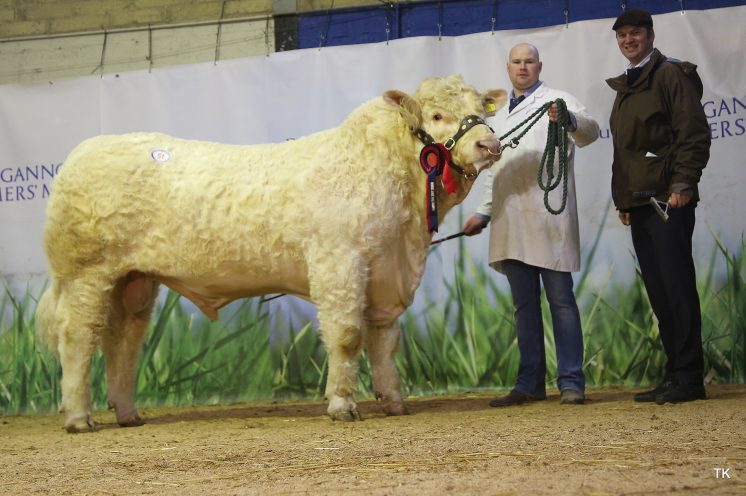 Two bulls secured a price of 4,800gns a piece and both came from Harold Stubbs & Alan Burleigh, Crummy, Co Fermanagh, who went on to sell a total of four to average £4,252.50. First up was the reserve supreme and reserve senior champion Derryharney Mustang, a 19-month-old who was the first to be purchased by the pre-sale judge Terry Coghill, on behalf of Mr Patterson, Feltigar, Orkney. The breeding here includes the 10,000gns Perth supreme champion Thrunton Bonjovi and the Balmoral Show supreme champion Goldies Carnival daughter Derryharney Hazel. 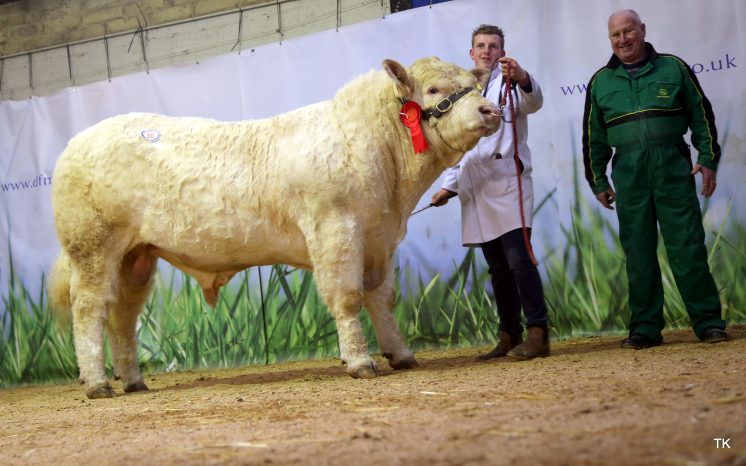 The next Stubbs and Burleigh consignment which also secured a 4,800gns bid was the class winning, September 2016-born Derryharney Muncher. Muncher who is sired by the proven high performing, short gestation and easy calving Blelack Digger is out of Derryharney Jazzystar, who in turn is sired by the Fintona male champion Derryharney Happyharry. He heads on to Stranocum, Co Antrim, to work for John McHenry.

J Smith, Randalstown, Co Antrim, was the next to snap up one of the Stubbs and Burleigh lots. The 18-month old Derryharney Mrmotivator, a son of the 22,000gns Newhouse Bigal and Thrunton Bonjovi daughter Derryharney Ipad, secured a bid of 3,600gns.

Selling in a 4,400gns deal to ED Sherrard, Belfast, Co Down, was a blue ticket winner from Will Short, Beragh, Co Tyrone. Woodpark Mcbeth is a November 2016-born son of the 14,000gns Goldies Usher
and Woodpark Idele, a daughter of the 9,500gns Stirling reserve senior champion Woodpark Gregg. 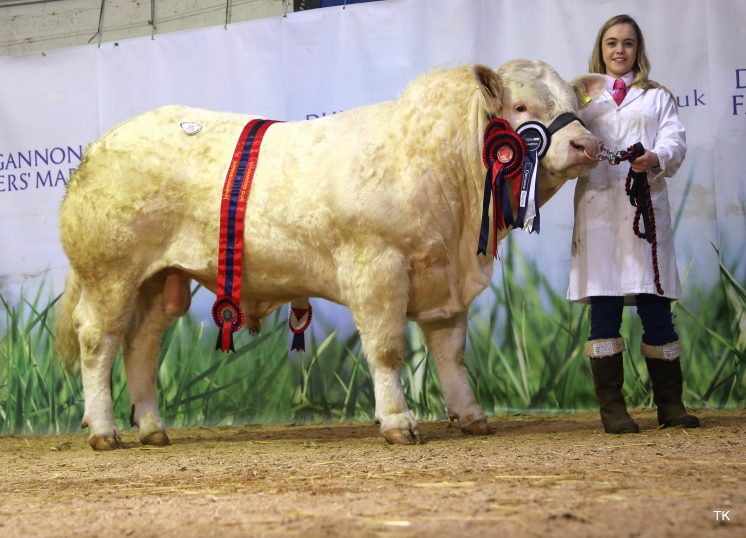 After his earlier purchase of the reserve champion, pre-sale show Judge Terry Coghill was again prepared to back up his judgement when he purchased the supreme champion Carrgene Muckian on behalf of Mr Featter, Westray, Orkney. An August 2016-born son of the Irish-bred Crossmolina Euro and the homebred Carrgene Gemma, a Major daughter, Muckian had also been awarded the overall male championship and senior male champion rosettes earlier in the day and secured a 4,200gns bid for breeder and consigner Eugene Muckian, Silverbridge, Co Down.

Next in the trade stakes at 3,700gns was the 16-month-old Dartonhall Milan, who is sired by the 12,000gns Maerdy Fiend. An entry from John Erskine, Killylea, Co Armagh, Milan’s dam is the 7,000gns Stirling female champion Vexour Galina, who goes back to the 30,000gns Dingle Hofmeister, he was purchased by J Martin, Staramore, Co Armagh.

Just behind at 3,600gns was an entry from Balfour Brothers, Bellanaleck, Co Fermanagh, who was purchased by ST Scott, Enniskillen, Co Fermanagh. The October 2016-born Clonatrig Max is sired by Doonally New and out of Blelack Digger daughter Clonatrig Ida. 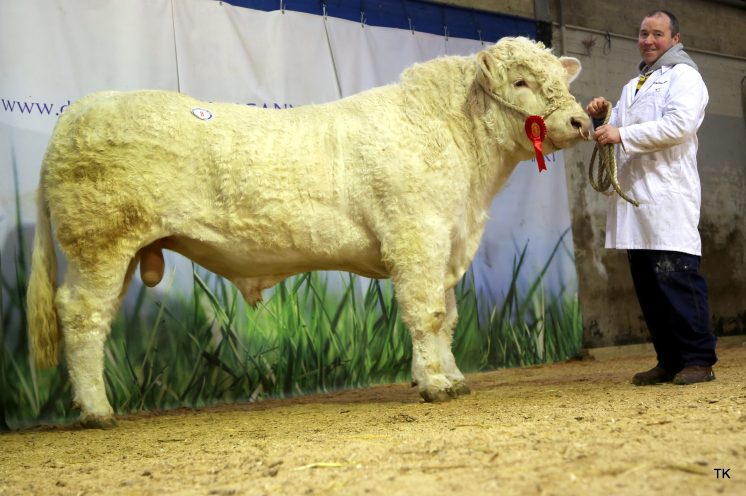 Two bulls were knocked down at 3,500gns a piece with the first coming from Vincent Cunningham, Dromore, Co Down. Class winner Cunnsallagh Macduff is by the well-known AI sire Indurain, while the dam is Cunnsallagh Edna, a cow by the Balmoral Show M&S Beef interbreed winner Sandelford Bergkamp. The 20-month-old Macduff goes home to work in Stewartstown, Co Tyrone for K Watters.

Matching the 3,500gns price tag was the September 2016-born Killadeas Magna, who was tapped out second in his class, for breeders and exhibitors Stuart and David Bothwell, Ballina Mallard, Co Fermanagh. A Hillan, Broughshane, Co Antrim, was the man who forked out the cash for this son of the 16,000gns Stirling supreme champion Blackford Dynamite and Killadeas Bea, a daughter of the Omagh Show supreme champion and Royal Ulster Show reserve supreme champion Derrygiff Mills.

Following on at 3,400gns was Moorlough Marco. G Cutler of Florencecourt, was the successful bidder of this yellow-ticket winner and took him home to his Co Fermanagh-based unit. This 15-month-old lad from John McBride, Strabane, Co Tyrone, is by the 10,000gns Portadown supreme champion Moorlough Palo, while the dam is the Doonally New-sired Moorlough Hannah.

Another from John McBride was the first to secure the next highest price of 3,200gns. Moorlough Mecca, a 16-month-old, sired by the 12,000gns Maerdy Fiend and out of Moorlough Isla, who goes back to the 16,000gns Stirling junior champion and Caithness Show supreme champion Clyth Diplomat, was purchased by George Ewart, Killylea, Co Armagh.

The second to be knocked down at 3,200gns was a yellow-ticket winning entry from the aforementioned Will Short. Woodpark Minstrel, a 21-month-old who was purchased by S Campbell, Bellaghy, Co Derry, is a 2007-born son of the 19,000gns Doune and Dunblane champion Corrie Alan bred out of Woodpark Guinevere, a Begonia daughter.

A trio of bulls sold for the next highest price of 3,100gns and the first was Tullyconnaught Mel. The breeding here includes the 18,000gns Thrunton Fairfax on to the home-bred Tullyconnaught Daisy, who goes back to the 15,000gns Carlisle supreme champion Burradon Talisman. The September 2016-born Mel was another purchased by judge Terry Coghill, this time for Mr Ritch, Sandwick, Orkney from Mr James Pyers, Corbet, Co Down.

Another to secure 3,100gns when knocked down to Michael Quinn, Cookstown, Co Tyrone, was the 16-month-old Glenramble Mark, an entry from Thomas O’Neill, Claudy, Co Derry. Mark is sired by the 12,000gns Carlisle reserve senior champion Wesley Equinox, while the dam is the Dromiskin Viceroy-sired Glenramble Honey.

Another trio secured matching price tags, this time at 3,000gns a piece. Derryharney Murray from the above-mentioned Harold Stubbs and grandson Alan Burleigh was the first, and was purchased by G Campbell, Dungannon, Co Tyrone. Murray is bred from Thrunton Bonjovi daughter Derryharney Imlucky, sired by Goldies Eddy and was 17-month-old on the day of sale.

The second 3,000gns bull was the October 2016-born Drumacritten Marcus, who goes home to work in Downpatrick, Co Down, for his new owner C Montgomery. Marcus is sired by the 16,000gns Stirling junior champion and Caithness Show supreme champion Clyth Diplomat, is out of Drumacritten Angel, a Lisnalurg Ignot daughter and secured a yellow rosette for vendor George Nelson, Rosslea, Co Fermanagh.

Matching the 3,000gns price tag was a class winner from the O’Kane Bros of Lower Ovill, Co Derry. Ovill Mahon who is a 16-month-old lad out of the 55,000gns Balmoral Show interbreed champion Sportsmans Columbo daughter Ovill Gwynne, and sired by the home-bred Ovill Instant went home with an undisclosed bidder. 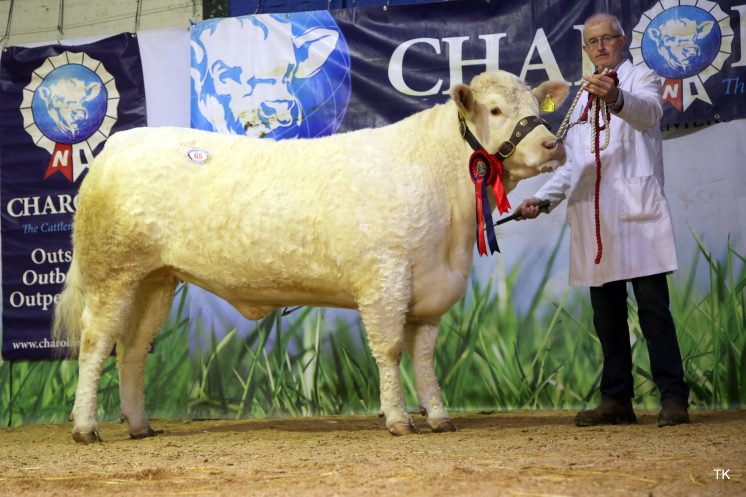 The female section was topped by the female champion at 3,100gns. The 21-month-old Brogher Mygirl from Mr T Phair, Bellanaleck, Co Fermanagh was purchased by Andrew Dunne, Kinawley, Co Fermanagh, for his 2014-established Charolais herd. Mygirl is another sired by Blelack Digger and out of the Lyonsdemesne Tzar daughter Brogher Fancygirl. 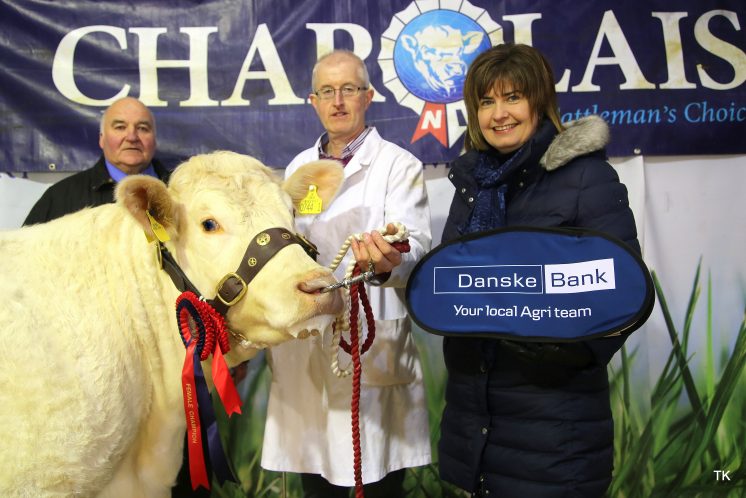 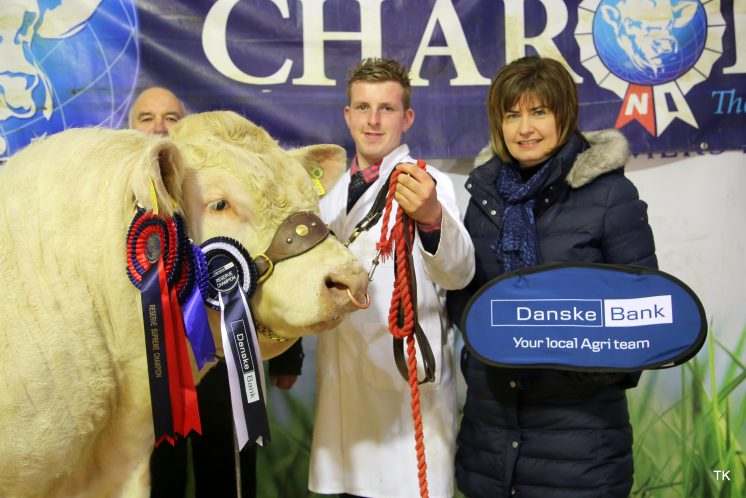