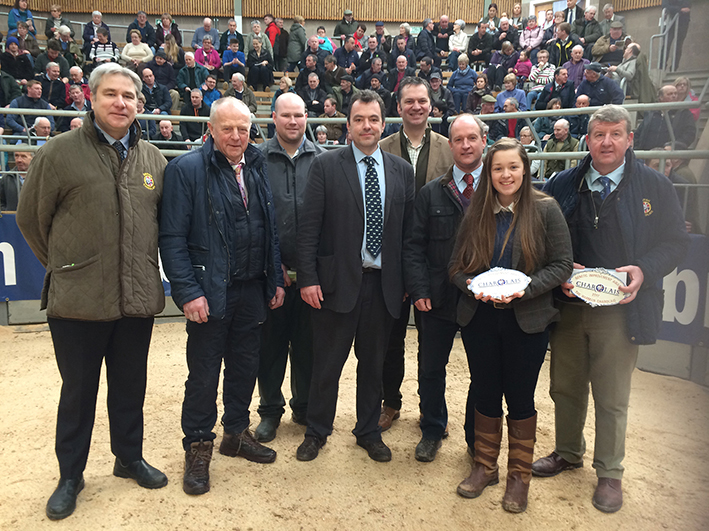 The Harman awards were Presented by Society Vice-chairman and award founder Ben Harman at the Stirling sale on Tuesday 20th February, who commented “The Self Replacing Index (SRI) is one of the key measures of genetic progress in British Charolais Cattle, and the Harman awards recognise those herds with the greatest % age improvement in SRI over the previous 12-month period.  I am delighted that such well-established herds have won the awards in each region this year, between them, the four herds boast 131 years of experience breeding British Charolais.  This demonstrates that the inclusion of performance data can enhance even the most experienced breeders’ businesses.”

“The requirement for accurately recorded performance data is driven by our customers, the commercial beef producers, who recognise the extra value of Charolais sired cattle in the store markets and abattoirs the length and breadth of the UK.  Breedplan performance data helps our customers identify the type of Charolais which best suit their needs, this data combined with visual assessment of potential bulls ensures that the crossing men can choose bulls which will give them the maximum return for their enterprises. This in turn ensures that those customers will return time and again to buy Charolais which have been proven in study after study to outperform all other breeds as a terminal sire.” 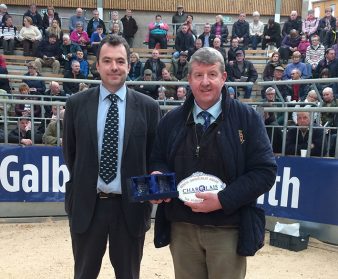 The overall and Scottish regional winner was the 20-cow-strong, Stirling based Falleninch herd of Andrew Hornall, which showed an improvement of +9.8 on SRI in the past 12 months, ending the year on an average of +41.

The Falleninch herd, which was established in 1973, joined the Breedplan scheme when it was adopted by the society in 2007, recognising the importance recording would have to the improvement of the herd.

Andrew, a 3rd generation Charolais breeder who farms 300 acres of permanent grass across two holdings, grazes 250 commercial cattle per year on a New Zealand-style grass grazing system and the high-quality beef produced supplies his Falleninch Farm butchery business. His main focus is on strong maternal traits which ensures that his Falleninch Herd is a regular and successful exhibitor at shows and sales.

Andrew said “I am really pleased to be awarded the top spot in this great competition, which through its selection process helps to enhance the integrity of the Charolais breed. Our purchase of Fairway Jefferson has helped us achieve our improvement this year and our customers seem to think so to, as his first son sold for 12,000gns at Stirling last week.” 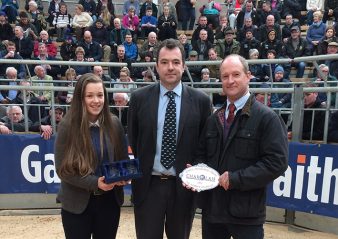 Runners-up were the English regional winners Jeremy, Ala Price, Mia and Ryan Price with a yearly SRI Improvement of +9.3 and a total average of +59 for their Herefordshire herd. The Price’s Oakchurch herd is comprised of 20 cows with females kept as replacements and bulls sold for breeding.

In order to monitor performance, Jeremy started recording as soon as he set up the herd. He says “I find if you enter accurate data, you get useful information back. People always want an idea of what they are buying, and performance recording really helps with that.”

Mr Price focuses on growth rates and says that calving ease is essential with the commercial producer in mind. He says “We aim for cows that give birth unassisted, have a short gestation period, do not suffer losses and produce calves with good growth rates and conformation. At the same time, we are also aiming for a bit more fat depth.” 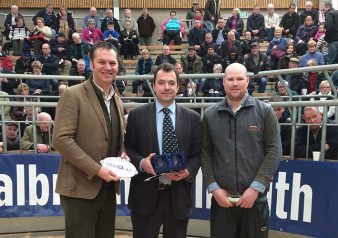 Heading up the Northern Ireland pack was the Coolnaslee herd of Jonathan Crawford, whose father the late Gilbert Crawford established the Charolais herd in 1993. Managed by Stuart Wilson the Maghera-based unit has shown a twelve-month improvement of +8.2 and their total average is +39.7.

Also joining Breedplan in 2007 Gilbert, who was always keeping an eye out for new opportunities to develop his herd, knew how to push the boundaries, with others benefiting from his experience and also working to keep pace and move with the times.

Jonathan is keen to keep moving with the herds progress and commented “I am very proud to accept this award on behalf of our herd. Breedplan is a great system and it shows our buyers just what their getting when the purchase a Coolnaslee bull. The purchase of the Stirling reserve champion Balthayock Justice has really made a difference to our calving ease figures. He now has 50 progeny on the ground and a calving ease score of +23.4 which puts him in the top 1% for the breed.” 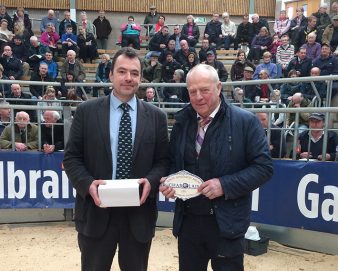 A SRI Improvement of +7.1 and a total average of +39.9 saw Esmor Evans’ Flintshire-based Maerdy herd awarded winners of the Welsh region. The 1973 established herd who recently announced the £25,000 sale of the 18-month-old Maerdy Morwr, also joined Breedplan early on and has moved from strength to strength with their 140-cow pedigree herd based on a 1000ft hill farm.

Esmor said “We have been striving for an improvement in the calving figures which are important to us as breeders and also to our customers, both pedigree and commercial. The influence of Blelack Fabulous, whose four son’s averaged just over £11,000 at Stirling, has help us achieve this improvement in calving ease and his progeny are also scanning well with good muscle area. Our other stock bull, the French-bred Maerdy Gouverneur has also proved to be a very good calver and six of the eight bulls we sold last week were by these two influential sires”.