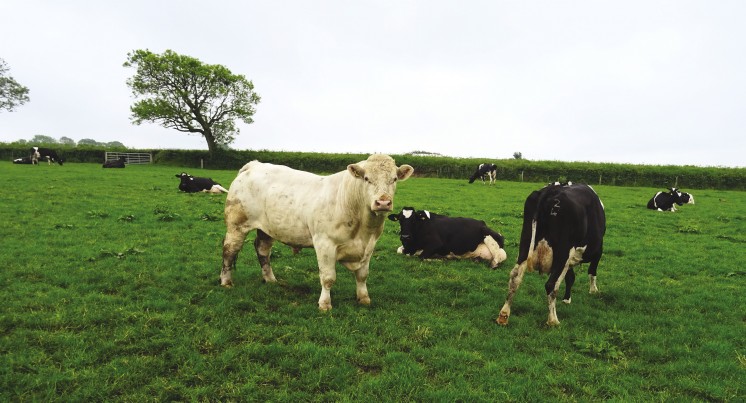 For more than 30 years Clifthayne Farm at Yarcombe, straddling the counties of Devon and Somerset on the edge of the Blackdown Hills, has been supporting a flying herd of milkers that thrive on the lush grassland that hasn’t seen any artificial fertiliser applied for more than half of that time.

The 430 Holstein Friesian cows graze for as much as the year as possible, with free access to grass or maize silage, and a top-up 20% cake fed to those giving more than 15 litres a day in the parlour. Soya and molasses are added to the mixer wagon before the silage is tipped into double-sided feed troughs in the yard.

But the real financial success of this herd comes from the decision to run 10 pedigree Charolais bulls with the cows – with the natural service resulting in top quality heifer and bull calves that top the sale prices on a regular basis at local Sedgemoor market.

“When my milk price hit rock bottom, at 20ppl, it was the value of the calves that saved me,” says farmer Steve Turner. “It’s probably unusual to use natural service on a herd of this size, but it works perfectly for us.”

Steve and his business partner Diana Turner switched from Simmental to Charolais bulls some years back, and is keen to point out that they’re an ideal cross for the large-framed and lean dairy cows he buys.   “I found the Simmental to have a difficult temperament, so moved to the Charolais, and certainly haven’t been disappointed. They have great temperaments and do a great job, returning me excellent market prices.”

He says he selects a bull with good hind conformation, good feet, a smaller head and smaller shoulder for ease of calving. “The Charolais bull has changed a lot over the past 10 years, and today is a more compact animal, with lighter bone, but one that still retains a great meat to bone ratio. Dairy farmers need to look at them as a way of improving overall farm returns – they grow so fast and efficiently and they’re in big demand at market.”

He admits they still carry a bit of ‘stigma’ for difficult calving’s, but maintains that has never been an issue at Clifthayne Farm, and says they no longer deserve this ‘tag’.   “Last year I had just three caesareans, and none were due to calving difficulties… all three were because of a twisted uterus.”

He says the calves are big, but maintains you need the popular big Holstein Friesian to serve, and adds that correct management of the dry cow is crucial – ensuring she doesn’t get too fat is key.

The calves are kept on their mothers for the first four weeks, to give them the best start, and then go to market. He sells about 300 a year, five or six a week, and regularly tops the market, with his bull calves currently selling for up to £480-£500 a head, and the heifers going to £360-£380.

“A lot of dairy producers just want their calves gone, but if you use a Charolais bull you have a calf worth really good money that can add to your bottom line. Mine is a simple system and works well, and it’s always good to have a second source of income.”

Steve took over the 350-acre all grass farm when his father died, and while cow numbers were as high as 630 at one stage, he has found his current numbers fit his system well. All milk goes to Dairy Crest at Davidstow, for Cathedral City cheese and a baby formula contract.

The cows are milked through a 36:36 side-by-side parlour, and average yields are around 8000 litres/cow. “My yields are gradually increasing, as I buy heifers with better genetics. But it’s a low cost system, with all the cattle, apart from the dry cows, kept in one group and grazed rotationally around 10 large fields that surround the farm.

“I aim to get them out in the spring as early as possible, and keep them out as late as possible into the winter. All-year-round they have an option to come inside at night.”

Grass grows well at Clifthayne Farm, and for 15 years no artificial fertiliser has been added to the fields. Instead he puts his slurry through a separator and uses a contractor to inject it into the soil. The solids left behind are applied on to local land he rents for growing maize, or given to local farmers who grow maize on his behalf.

“There’s a bit of competition now from AD plants, but there’s plenty of maize grown locally and quite a few people around here have gone out of milk production, so that’s taken up the slack.

“Luckily, I have a lot of clamp space here, I’ve only just started on last year’s maize silage, and always aim to have six months feed in stock so I can buy at the most competitive prices. I don’t want to be dependent on price, so having the stock is like having an insurance policy.”

Steve aims to pay between £400 and £450/acre for standing maize, then sends in a contractor to cut, cart and ensile it.

His herd replacement rate is around 20% a year, with heifers again selected by him and bought at Sedgemoor market. He hasn’t got the buildings to rear his own replacements, and pays around £1200 a head for good second-quality heifers. “I can never afford the best!”

Charolais calves provide him with extra income throughout the year, and he says two calves, plus a barren cow, cover the cost of each new heifer he brings into the herd. “I try to keep the age of the milking herd quite young, and weed out for age, mastitis, bad feet or failure to get into calf. But I would never cull a good cow because she was old.”

Key to his natural service is the involvement of a vet who’s able to do good pregnancy testing. Steve’s vet visits the farm every two weeks and checks every cow that has calved in the last four or five months, providing calving dates for his records.

“I source most of my Charolais bulls from the market too,” he says, “occasionally buying one privately.  I think if I worked out the equivalent AI cost I would find natural service a more cost-efficient option.”

This system allows Steve to start at 4am and be finished by 8am, giving him time during the day to enjoy other activities. Son Deane works on the farm, alongside daughter Christina, who milks a couple of times a week, and daughter Rosie who helps with the paperwork. A local girl Kate also helps out with the milking.

“I’m really happy with the way things are going,” he says. “I’m amazed there are not more Charolais bulls being used on dairy cows today – farmers need to look at how the breed has changed. At Sedgemoor there are often only 20 or so Charolais cross calves available, and five or six are mine. They always go for the best prices, and are in big demand.”

Finally, he says that were he to change anything on the farm he would need to employ more labour – perhaps up to two extra staff – and that would have a significant effect on his bottom line.

“You can always make a simple job complicated if you want to…” he adds. 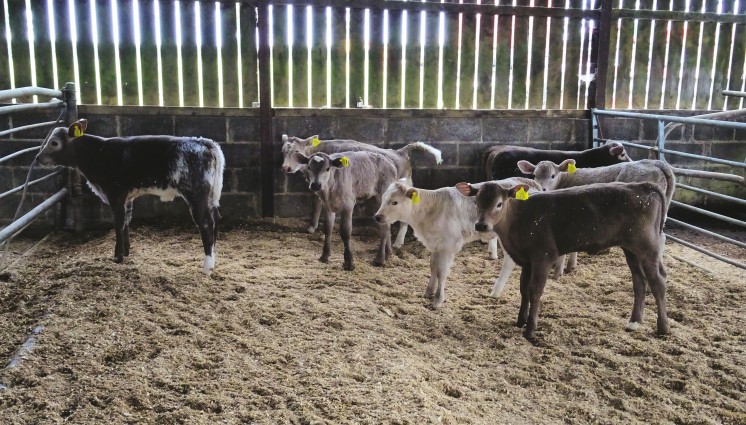 A group of Charolais calves, four weeks old, ready to go to market