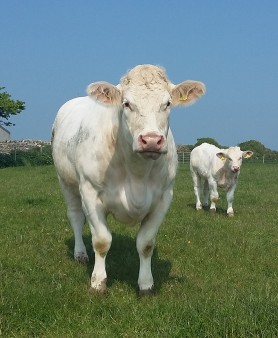 It was a cracking day on Saturday 28 May for the South West Charolais Youth qualifier held at Compact Farm, Worth Matravers, Dorset by kind invitation of Andrew and Beth White and hosted by regional co-ordinator Jane Haw.

The Balbithan herd was established in 1988 and has gone from strength to strength with their animals becoming regular fixtures at many shows across the South West. Just last year the herd can boast breed championship awards at the National, Royal Berkshire, Devon County, Rutland County and Bath and West Shows as well as being awarded the female championship at the Royal Cornwall and the Reserve Supreme championship at the Newbury Show. In 2002 Balbithan Nadia was the Interbreed Champion at the Royal Show and their highest priced bull Balbithan Vespasian sold for 26,000gns at Perth in February of the same year and has gone on to produce over 100 progeny in the joint purchasers herds alone. Most of the bulls are sold from the farm gate and the White family has 30 Charolais cows calving in the spring as well as a 150 strong suckler herd from which they finish their Charolais sired store cattle.

The afternoon began with a talk from the master judge Graham Fishlock who explained the type of Charolais he would be looking for and the attributes of one of the Balbithan cow and calf outfits and then the competitors had a chance to look over the three classes and make their choices. While the scoring took place there was a very informative presentation on embryo transplantation by vet Andre Northey from Synergy Farm Health before Jane took us on a tour of the Charolais cattle. We were treated to a lovely feast including homemade cakes before the presentations.

The winners and runners up of each of the three age groups go forward to the Charolais Youth stockjudging final at the Livestock Event, NEC on the 6th July. The highest score of the day came from junior section winner Emily Mitchell with an impressive 142 points and runner up Nikki Stacey was close behind. In the Intermediate section sisters Georgia and Caitlin Dyer scored 137 and 128 points respectively and the senior section was headed up by Amy Wylde on 126 marks and George Nancekivell with a score of 121.

The South West club and the British Charolais Cattle Society would like to thank the White family for their excellent hospitability, regional co-ordinator Jane Haw for organising the day, Vet Andre Northey and master judge Graham Fishlock. 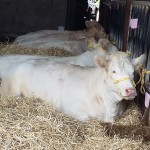 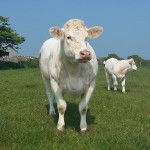 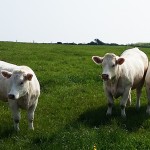 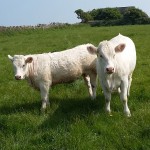 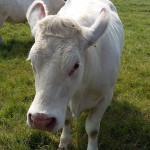