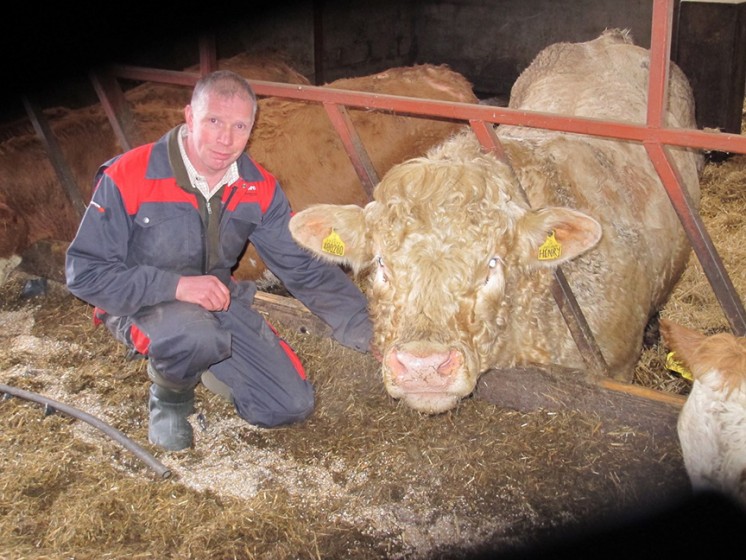 Charolais has been the terminal sire at Cairncoullie for over 30 years, and without question will continue that role in future regardless of processors’ new weight limits. “We run a high input, high output unit, and our priority is to maximise the number of kilos per cow as quickly and efficiently as possible,” Callum Keir explains.

“Charolais with its unbeatable weight for age is vital to doing that job together with detailed management and accompanying nutrition which is resulting in our cattle already arriving within processors new specification.

“All Charolais cross steers and a portion of the heifers are sold deadweight, some butcher type heifers are traded liveweight at Thainstone mart where they frequently are found within the day’s top prices.”

Genetics: “The selection process is initially based on kill sheet observations,” Callum explains. “For example, if a portion of same sired calves were failing to grade within the grid specification, then we would look for a new bull with in a bigger muscle area. We also go for longer type Charolais bulls and they must be reared on forage and fibre based diets. The latest additions were sourced from the Thurso herd.”

Nutrition: “Diets are all home mixed using the same basic ingredients – home-grown forage and cereals combined with cost effective bought in blends. The key is formulating diets specific to age, weight and gender, consequently they are easier to manage in groups and offer flexibility to vary starch and protein levels at key stages of development,” says Callum. “Harbro’s David MacKenzie manages the diets and calls in on a regular basis to monitor the farm’s data.” The diets feature the following

Management: “We try to pay attention to detail at every turn and manage the herd by a health plan, testing and vaccinating for infections, ensuring cows energy requirements are met and by knowing their mineral status . They calve down fit not fat and are literally able to calve themselves which is really important since I’m totally responsible for all the stock work. We give the heifers the best chance possible by running them in a separate group until second calving.

“Grampian Super Suckler Minerals have been used for a number of years which have been balanced to make up for shortfalls in local trace element deficiencies which ensure we have productive cows and healthy new born calves that are able to reach their potential. We also feed Omega 25 at 150g per head which is a high fish oil product to ensure cows come into heat quicker.

Callum is also focused on young bull management. “Charolais bulls are purchased at 14 to 16 months; in their first working year we introduce them to the same number of cows as age in months, for example 20 cows at 20 months of age. We find this regime helps to extend their working life to eight to nine years.”

He adds: “We’re continually looking at ways to improve herd efficiency. For example, shortening the grazing season and introducing the steers to ad lib barley three months earlier not only helped us to achieve target deadweight sooner, but resulted in freeing up more quality grass for lamb finishing and reducing fertiliser requirements.”