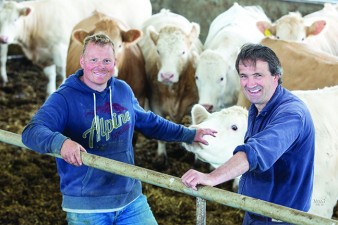 “The Charolais calves are 50kg deadweight heavier than the Simmental calves at the same age and consistently make £200 a head more both in the conventional and organic systems.”

Since purchasing its first Charolais bull in 1988, the cattle enterprise at CG Greig (Farms) Ltd in Cupar, Fife, has expanded and evolved into a system that best suits its surroundings – but throughout that time, the firm’s choice of terminal sire has remained unchanged.

That, according to farm manager of 30 years, Pat Lambert, is down to the Charolais breed’s unrivaled ability to produce the highest weights for age – exactly what is needed in this large-scale beef finishing unit.

“The farm was originally all arable, and when we decided to introduce cattle back in the late 1980s, we started with Limousin and Simmental cross cows and bought the Charolais bull Ploughfield Custer, with the intention of breeding big calves to sell as stores,” explained Pat, adding that the cow herd numbers gradually increased as the business bought up more land.

“Our policy changed when the BSE crisis hit in 1996, at which point we decided to become a self contained unit, breeding our own replacement females and finishing all the calves ourselves. We used an Angus bull on the Simmental cows and kept the heifers to add to the herd. We continued to build the herd up that way, criss-crossing the Angus and Simmentals for the females and always using a Charolais as a terminal sire,” he added.

The business of CG Greig(Farms) now owns 2000 acres and rents further ground on a variety of agreements, with the cow herd numbers sitting at 500 sucklers, and the arable side extending to 1250 acres of cereals, 250 acres of vegetables and 200 acres of seed potatoes. Pat is also in charge of the separate business, Mosszone Ltd, a 400-acre organic unit based at Balcanquhal Farm with 220 suckler cows. Within the cattle enterprise, he oversees a staff of two cattlemen at CG Greig and one at Mosszone. 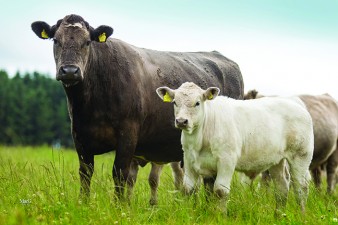 A typical suckler cow with a high performance Charolais calf

Concerns in recent years that the suckler females were becoming too large and expensive to maintain and losing some of their milk and hardiness, prompted the decision to invest in a herd of pure Luing cows two years ago – 50 spring calvers, and 20 autumn calvers which are crossed with the Simmental. The Sim-Luings will then be crossed with the Angus bull and the heifers from that mix also kept as replacements for the suckler herd.

“The Luings are smaller, hardier and easier kept, with plenty milk, and we like the easy fleshing abilities of the Angus, so this will hopefully be a good mix as a suckler female, and a good cross with the Charolais sire,” said Pat.

Currently, the majority of the herd (325) calves in the spring, with 225 of those calving to the Charolais, while the remaining 175 are autumn calvers. The target is then to wean to spring calves at around 210 days (seven months old), at an average weight of 325kg. Spring born Charolais calves are kept entire, while autumn-born ones are castrated.

Meanwhile, the autumn steers and heifers are weaned at 270 days, weighing up to 400kg. Replacement heifers for the spring herd are mainly taken from the autumn lot, aiming to have their first calf at 30 months and vice versa. 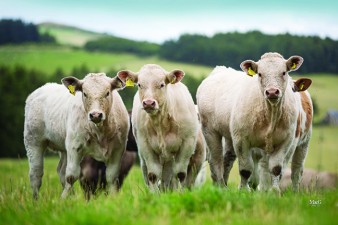 The quality of the Charolais calves speak for themselves

“The spring cows don’t receive any concentrates at all, just silage, wholecrop and straw, and the autumn calvers are supplemented with fodder beet along with higher levels of wholecrop,” said Pat.
Spring-born bulls are finished at 14-15-months-old, with the last batch of 63 selling through McIntosh Donald at 695kg liveweight (402kg d/w), and leveling at £1486 per head (370p per kg). The last lot of spring-born heifers to go were finished at 553 days old (18.4 months), weighing 366.5kg d/w and made an average £1373/head.

“The Charolais calves are 50kg deadweight heavier than the Simmental calves at the same age, and consistently make £200 a head more both in conventional and organic systems. There’s no question of using any other breed as our main terminal sire, but we don’t have the type of ground that will stand big Charolais type cows, so we need to use other breeds for the replacement females,” said Pat.
The cows are all serviced naturally, with the spring calvers running in six groups with Charolais bulls, and the autumn herd in two or three groups. Bulls run with the cows for a strict 63-day period, with the spring calving beginning mid-March and the autumn in mid-September. 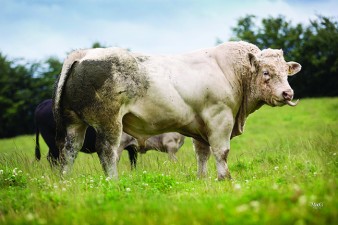 A further five bulls are needed for the organic Mosszone herd, where the cows are predominantly Angus crosses, and all calve from the beginning of April to the Charolais. Those calves are finished at 18-19-months off grass and hoppers, and go directly to Dovecote Park, where they receive a premium price for their organic status. Last year’s steers were finished at 590 days old, weighing 384kg d/w and sold to average £1736, while the heifers, finished at 556 days and 378kg d/w, levelled at £1707.

Working on this large scale, it is vital that the bulls can be relied upon to perform to their best ability. Some 12 Charolais are needed at any one time and Pat says he now prefers to buy them at 13-15-months old.

“We’re looking for naturally fleshing, long bulls that aren’t extreme, and ideally we buy them younger before they’ve had the chance to be pushed too hard, as that way they tend to last longer.

“There’s no point in increasingly chasing high muscularity, when that’s not actually what the market wants – we should be concentrating on the cattle within the breed that can achieve better performance with fewer inputs.”

Pat pays attention to figures, but doesn’t rely solely on them, instead, a main priority is a clean health status. One bull that has performed particularly well over recent years is Hindstones Cruiser, bought in 2008 without any figures – Pat says he has bred consistently good, big fleshy calves that regularly achieve E grades due to their length and power.

“The Charolais breed has continued to improve over the past 20 years or so, especially with ease of calving, and I think people now understand the importance of a short gestation length. But the cows have to be in the right condition too, and that’s up to us commercial breeders. 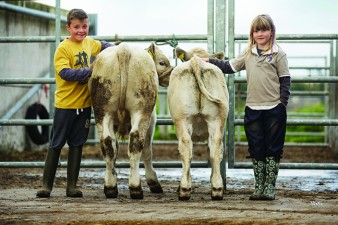 “I do think that it’s vital to concentrate on easy-fleshing traits though. With abattoirs now putting maximum weight limits on calves, there’s no point in keeping chasing growth – we need cattle that have consistently good tops and loins; able to breed calves with natural vigour that can be finished easier, off less.

‘That’s even more important now, with the changes in the subsidy system – cattle have to be able to stand on their own merits and be able to make a profit. For the beef industry to work for everyone, we need a better dissemination of information down the line, and pedigree breeders need to be a part of that,” added Pat.