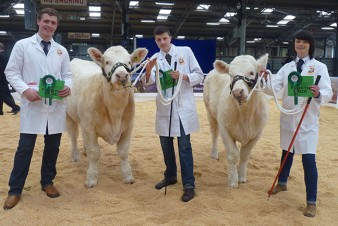 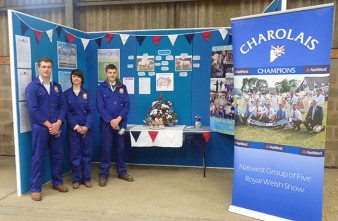 The Charolais team did the Society proud by being placed fourth in the inaugural National Young Show Stars Competition which was held at the Three Counties Showground on 1 and 2 April.

The team comprised Will Tucker of Horton, Swansea, Anwen Jones from Pencader, Carmarthenshire and Donald Maclean of Eastleigh Hampshire.

The competitors and cattle arrived on the Wednesday afternoon and the first order of business was for them to build and arrange the stand with materials that they had prepared in advance, this included a thank you to the sponsors, fun quiz, a beautiful flower display and some delicious cupcakes. 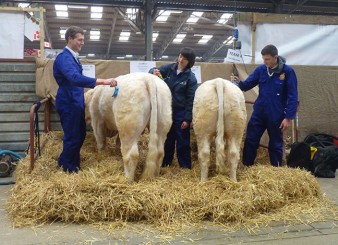 Once the stand was prepared and the cattle settled it was time for the stock judging competition. Anwen and the other reason givers had first opportunity to view the cattle which were to be judged in a slightly different way from conventional competition. There were six cattle and the competitors had to discard two and place only the best four. Will and Donald had a chance to see the cattle close up along with the other competitors whilst Anwen gave her reasons. When all the scores had been handed in and the reasons had been heard the judge Hertfordshire-based Bridget Borlase of the Sacombe Simmental herd explained how and why she had placed the cattle. The teams returned to check their cattle before the evening’s entertainment commenced which included a hog roast and disco.

First thing Thursday morning the Charolais team got to work preparing the two heifers which were kindly supplied by Mortimers Farms Ltd. Their clipping and presentation techniques were judged by Stockport-based Nairn Wyllie, stockman for Boden and Davies Charolais and Limousin Sportsmans herd and Robert Clarke, stock manager for Shadwell Estate’s Aberdeen-Angus herd, Suffolk. The team scored top marks in this section of the competition. 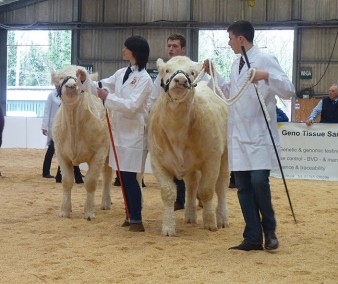 After being allowed four hours to prepare their cattle there was a short break for lunch before they began their final preparations for the show ring. Anwen and Donald led the heifers and Will was interviewed. The Charolais team scored highly for their parading, ring etiquette and oral presentation skills which were also judged by Bridget Borlase.

Four groups were judged in the ring before all twenty teams were called back with their cattle for the final presentation. The Charolais team were placed fourth with a score of 844 out of a possible 1000 which was an impressive result when considering they were only 29 points short of the competition winners.

The Society would like to thank Will, Anwen and Donald for all their efforts and the impeccable way that they represented the Society at the competition, Mortimers Farms Ltd for providing two excellent heifers and Charlie Maclean for accompanying the cattle and supporting the team. We are already planning for next year’s competition. 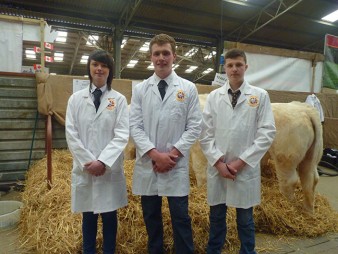