Johnathan Watson with the Tweeddale Herd

The Tweeddale herd, owned by Brian Redhead and Jonathan Watson, of Berwick-upon-Tweed, Northumberland, has been recognised by EBLEX as the Most Improved Herd of Charolais cattle in England for 2014.

The award is presented by the EBLEX Beef Better Returns Programme (BRP) to the performance-recorded herd that shows the greatest genetic gain for commercial characteristics over a 12-month period. There is a separate award for each of 10 UK breeds.

Bowsden Moor, on the doorstep of the Northumberland National Park and the Scottish border, is a 600-acre livestock farm. It is home to two pedigree flocks and three pedigree herds, with a total of 300 sheep and 160 cows respectively. They provide their own winter forage and 35 acres of winter barley is grown for home use.

Third-generation farmer Jonathan Watson runs Bowsden Moor in partnership with his uncle Brian Redhead. Their focus is on producing quality pedigree livestock to suit the commercial needs of today’s modern farmer, with animals that are born easily with good growth rates to promote efficient production systems.
Entering the pedigree market thirty years ago with the needs of the commercial buyer in mind, they have developed well-established pedigree flocks of Brijon Suffolks and Brijon Texels, providing around 80 shearling rams sold through Kelso each year.

The 100-strong Tweeddale Limousins herd was established in 1998 and their herd of 40 Tweeddale British Blue cows was founded seven years ago.

Establishing an easy-calving Charolais herd
Around six years ago, Jonathan and Brian started to become aware of the increasing popularity of the Charolais breed, particularly among commercial producers, whose interest was piqued due to the breed’s focus on calving ease.

Their own interest in the breed started to develop and, in 2012, satisfied that they wanted to establish their own pedigree herd, they purchased 12 cows privately; ten with calves at foot, and two in-calf females. They added another four cows later that year from the Rumsden herd, two in-calf heifers from the Holtstead herd and seven heifers from the Barrance herd to form the foundation 25 cows. They concentrated on the visual appearance of the cows, selecting females with correct breed type, a large frame, good locomotion and style.

Being well-acquainted with pedigree herd production and having listened to buyers over the years, they already believed performance recording was a useful tool to develop a herd’s genetic potential. Therefore a keen focus on figures, concentrating on particular traits, was essential when it came to purchasing their bull. Their focus was on cattle with superior Estimated Breeding Values (EBVs) for calving ease and milk, combined with good 200- and 400-Day Weight EBVs. These traits help to predict a bull’s genetic potential to produce calves born easily which will develop and grow quickly.

In June 2012 they purchased Blelack Blackberet, a proven six-year-old stock bull, owned by the Goldie family, who had already sold around 40 sons from him. Blelack Black Beret shows exceptional EBVs for Direct Calving Ease, being in the top one per cent of the breed, and 200, 400 and 600-Day Weight EBVs all in the top 10 per cent of the breed. At the same time, they purchased a heifer, “Goldies Gleam”, her brother being a top bull on an AI stud.

Jonathan and Brian have a group of 40 recipient cows for use within their extensive flushing programmes involving each of these pedigree herds, around half of which will carry Charolais embryos.

To date they have had two crops of calves from Blackberet and recently sold their first bull sired by him, aged 13 months. Tweeddale Invincible had a Terminal Index and Calving Ease EBV in the top 10 per cent of the breed. As is the case with Blelack Blackberet, the calving ease is coupled with good growth rates, with a 400-Day Weight EBV in the top 1 per cent of the breed. At the Carlisle society sale, Tweeddale Invincible made 7500gns. Their initial intention in establishing the Charolais herd being realised, this young bull was a small, easily-born calf himself, and demonstrated a daily liveweight gain of 2.02kg.
They have done extensive embryo work with Goldies Gleam and Lakenheath Eugenie each having ten calves on the ground, all showing great promise. Two of the Eugenie x Blackberet heifers have since been introduced into the flushing programme

Annual production system
The Tweeddale herd has three main calving blocks, providing a year-round supply of pedigree bulls from their Limousin and Charolais herds. These bulls are aged 14 to 16 months old, with around 60 per cent being sold through the Carlisle and Sterling society sales, and 40 per cent sold directly from the farm.
Their British Blues tend to calve between April and July and are sold through the main society sale in May when they are approaching two years old.

Cows are housed over winter and, for ease of management, all calving is done indoors. Calves are creep fed from four months of age and weaned at around six months old. A month after weaning, they select which animals to retain for their own replacements or to sell for breeding. Heifers are separated from bull calves and reared on a forage diet. They will be 30 months old at first calving.

While building up numbers, they have retained up to 70 per cent of the females produced. Now they can start to be more selective about which females to retain and use estimated breeding values (EBVs) to concentrate on growth traits, milk and calving figures, as well as overall index to ensure the herd is progressive. Combined with performance, females must have a large frame with good locomotion and breed type. Temperament is also important, as they want quiet, steady, unstressed animals.

All male calves remain entire, anything not making the grade will be housed on an intensive ration to finish at 13 months of age, with the aim to provide a 400kg, U or E-grade carcase.

Bull calves are housed for winter on a growing ration. Those destined for October or February sales will be turned out to grass in April and brought back in for a couple of months in advance of sale.
“Blelack Blackberet is working tremendously well and we are really pleased with his progeny to date,” said Jonathan.
“Buying a proven bull with exceptional breeding values for calving and growth traits is boosting overall index figures in our progeny. He has certainly contributed to achieving this early award from EBLEX, but there is still plenty of work to do!
“Blackberet has a good breed character; his calves are born small with no muscle, but they grow like mushrooms and pile on the muscle!”

Bulls selected for artificial insemination or flushing programmes are chosen to compliment Blackberet. They focus on increasing eye muscle in the herd by choosing sires within the top one per cent for the breed, while retaining the easy calving trait. These daughters are to be bred back to Beret.

Marketing their stock
The Tweeddale herd frequently attend the Royal Highland, Great Yorkshire and Royal Welsh shows, as well as the Livestock Event at Birmingham.

“Selling pedigree cattle is the main part of our business and the main reason for showing is to provide a shop window from which to advertise our stock,” said Jonathan.

They aim to sell 20 Charolais bulls a year; the embryo work allows them to concentrate on their top breeding cows to produce as many calves from them as possible each year.

The majority of Tweeddale Charolais are sold to the commercial market, with a great emphasis put on EBVs and index through the sales. The society is fully behind performance recording and all bulls sold through their sales are now presented with their ultrasound scanning information and at least two weights alongside them.

Jonathan and Brian have a good reputation and the Tweeddale, Brijon and Bowsden Moor prefixes are well-known to other pedigree and commercial producers. Together they look forward to taking their Charolais herd forward and watching it develop over the forthcoming years. 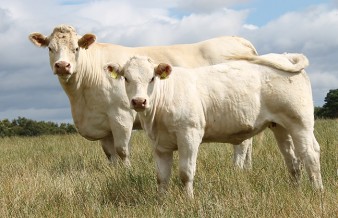 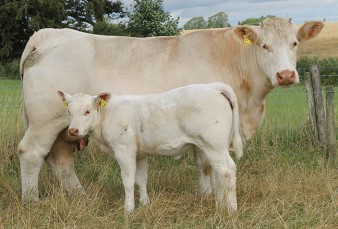