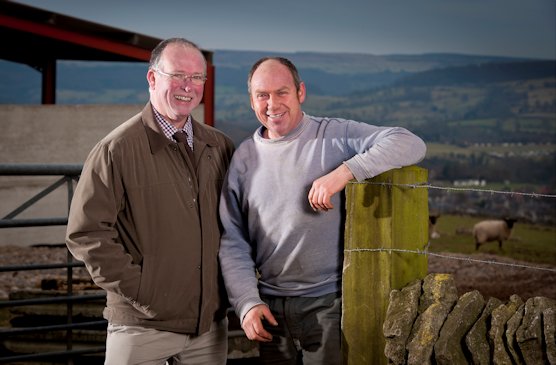 Farmers Weekly/Harper Adams Beef Focus farmer Simon Frost at Hopping Farm in the Derbyshire dales manages a herd 130 Spring calving Limousin x Holstein-Friesian cows that are put to high index Charolais bulls. Simon focusses on using bulls which are easy calving with below average birth weights and have high growth rates and eye muscle area EBVs. These types of bulls are termed ‘curve benders’ and can be found in all breeds.

Simon’s calves are weaned in October and intensively finished on a 16% CP home mix and ad lib big bale silage. The home mix which consists of rolled barley, oats, hipro soya, linseed and minerals is initially fed at 1.5kg per day. By 4 weeks the home mix is increased to 4kg, with 6kg by 6 weeks then 8kg by week 8 and remains at this level through to slaughter. On arrival the calves are offered top quality 1st cut grass silage but by week 8 is replaced by mature 2nd cut silage with higher fibre to complement the high home mix feed rate.

The following is an analysis of the performance of bull calves born in 2011 sired by 3 different bulls used in the herd in 2010.

Shown in table 2 are the EBVs and Terminal Indexes for Littlebovey Altra, Balthayock Clifford and Swalesmoor Duke compared the breed average for 2011 born bull calves.