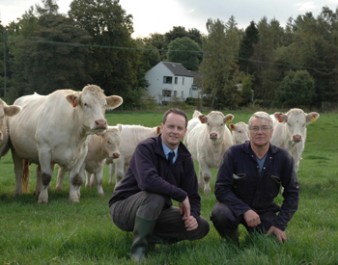 Pure Charolais steers are consistently demonstrating performance that exceeds their Charolais cross counterparts and subsequently, achieving the highest gross return according to the third set of interim results from a trial at SAC Bush commissioned by the British Charolais Cattle Society.

The purebreds supported average daily liveweight gains of 1.37kg and the majority graded in the U bracket and fat class 3 or 4L, making them eligible for a premium market.

The trial which was primarily designed by BCCS to investigate the role of purebred Charolais as a potential suckler damline in the UK, is mirroring the role played by the breed in its native France where the suckler population amounts to approximately two million purebred Charolais cows. A sub herd of 30 commercial purebred Charolais heifers was established four years ago within SAC’s 200 cow spring calving herd on its Easter Howgate LFA unit. The heifers were sourced from several herds as functionally sound for commercial breeding purposes.

Apart from focusing on the purebred commercial Charolais heifers which have demonstrated that they can calve down at an average two years with minimal assistance, the trial is investigating the pure Charolais male calves, a by-product from the trial. These were steers and introduced to an intensive finishing system post weaning at seven to eight months to determine level of performance.

“The latest trial results reflect the pure Charolais steers’ ability to maximise market potential for both weight and grades, and they are encouraging when taking into account their sire was selected for his maternal ability,” explains SAC’s beef specialist, Gavin Hill. “The pure Charolais and Charolais cross steers recorded an identical lifetime daily live weight gain of 1.30kg. See Table 1. A very similar trend was reported in the crop of steers 12 months earlier.

“However, the pure Charolais steers were grown on to heavier weights at slaughter without putting down unwanted fat levels,” he reports. “In fact they produced superior carcase grades over the Charolais cross steers with more than 70% of pure Charolais steers grading U 4L or better.” See Table 2. “That extra weight, plus superior conformation enabled them to achieve the highest average gross return of £795 a head.”

Overall, these findings reinforce the trial’s previous results, and conclude that under the new payment regime, purebred Charolais will suit the market place with their ability to finish at optimum weight at an early age.” explains Mr Hill. “In addition, we reared these cattle to match a specific target market where substantial premiums are paid for U3, U4L and R3 Grade cattle.”

He comments: “It is vital that we target the right market for our cattle today. Processors vary often in specification and weight they are looking for, therefore producers need to be aware of who wants what and match it accordingly. While we grew the pure Charolais on for a little longer for additional weight, our stockman had the skill to identify exactly they were ready to be drawn to achieve the best carcase grades. However as with many other pure breeds there is vital importance in developing and identifying those bulls with good maternal lines which will breed suitable replacements for the herd while also producing finishing cattle that will suit the market place in the future on an economic basis.”

BCCS’ David Benson comments: “The latest SAC results confirm that the real value of Charolais has so far, without a doubt, been under estimated in the UK. While an increasing number of commercial producers are realising the breed’s value as a terminal sire and its ability to demonstrate growth is king, the role of the pure Charolais role within the suckler herd is now being proven in the SAC trial. Once again, purebred Charolais steers have delivered equal if not higher performance and subsequently higher returns than Charolais crosses, findings which need to be seriously taken on board by dedicated suckler producers who are currently reassessing their businesses to find the most cost effective system in the run up to 2012.” He adds: “They must also remember that the cows themselves are also scheduled to eventually command premiums in the cull marketplace.”