Hundreds of suppliers to one of Scotland’s major processors are reaping the benefits of finishing Charolais cross cattle within the specification and to target weight faster than any other Continental cross cattle. They are also measuring and monitoring their performance against the company’s monitoring programme which in turn is enabling them to make more informed management decisions. Doug Stephen, manager of Crichie Farms and the Watson family, of Darnford are among them.

The bottom line: Charolais crosses are worth an additional income of over £125 a head more than all other finished cattle 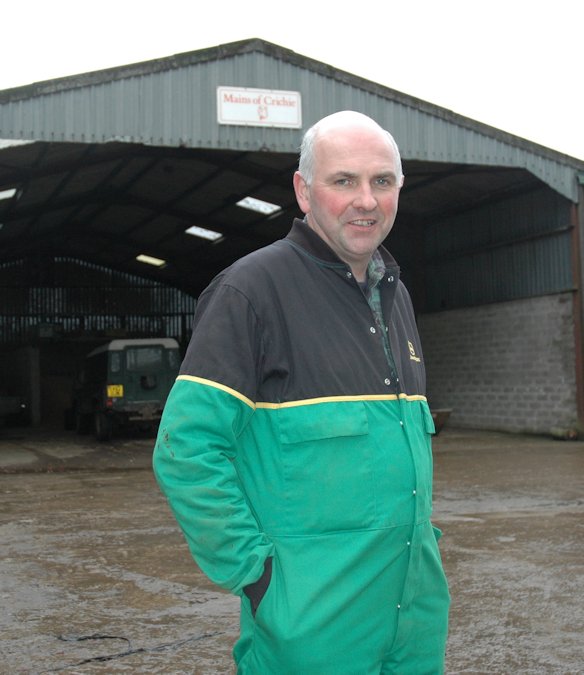 Doug Stephen says both Charolais cross bulls and heifers are finishing on average three weeks earlier than his other continental crosses, which brings obvious savings to the feed and straw bill – an average of over £73 per head together with fixed costs including labour which is a scarce resource. Furthermore, 92% of the Charolais cross bulls are meeting the processor’s specification compared with 70% of the others.

Doug manages Crichie Farms, Stuartfield, Mintlaw, single handed. The 1,000 acre mixed unit owned by Geordie Burnett Stuart, carries a 150 cow spring calving suckler herd on 300 LFA acres, while 450 acres of lowland is in cropping and the remainder woodland. “We attempt to maximise the number of kilos produced per acre from home grown resources, and we aim to be efficient as possible which means the fewer days the cattle are on the farm the better.”

Apart from heifers retained for replacement purposes, Crichie’s entire crop of calves are taken through to finishing and sold to McIntosh Donald which offers support with its Qboxanalysis. The monitoring programme provides producers with comparative information on the on-farm performance of their own individual animals against the rest of the company’s kill, and ultimately enables them to make better on-farm management decisions.

Crichie’s Charolais cross bulls are currently finishing at an average 380kg at 14 months, 21 days earlier than the unit’s other Continental crosses, while same age Charolais cross heifers fed an identical intensive diet are reaching 300kg target weight. This performance reflects similar levels achieved by over 58,000 head of bulls incorporated in to the Qboxanalysis. See table 1.

At Crichie Farms, the Qboxanalysis data is examined after each kill. “We look forward to seeing how the first pick of bulls of the season has performed and if the changes we’ve made during the cycle have impacted on their performance,” says Doug. “For example, we’ve selected naturally grown Charolais bulls on conformation for over 25 years, however more recently we’ve started to use Breedplan data as an extra tool taking in EBVs for calving ease and growth rate. The latest bull we purchased is consistently delivering easily calved calves with faster growth rates and fewer days to finish, whilst 75% of his bulls and one third of the heifers are grading within the U specification.”

Nutrition has also come under the microscope. “While we were relatively satisfied with performance, after looking at the Qboxanalysis, we believed our cattle had the potential to be taken to the next level, so our Harbro nutritionist, David Mackenzie formulated a series of higher energy rations based on homegrown barley.”

Creep offered from mid-August comprises 8.71%DM, 12.9MJ/kg ME and 18.5% CP. Calves are weaned in late October at an average 300kg, housed and introduced to a grower diet with a similar dry matter and energy specification, CP is reduced to 16.6% and added to barley straw, wheat dark grains and minerals. The same diet is tweaked and CP reduced further to 14.7% for the final 90 days of finishing.

“The change in diet spec has resulted in a massive improvement in performance; for example the bulls average DLG has improved by 10% to 1.52kg, consequently days to finishing has been reduced by 5%,” he says adding: “At the end of the day we’re paid on weight and it has to be produced efficiently. Our enterprise is delivering with a powerful combination of Charolais genetics and a mainly home-grown diet, and our processor’s monitoring programme is helping us to keep on track.” 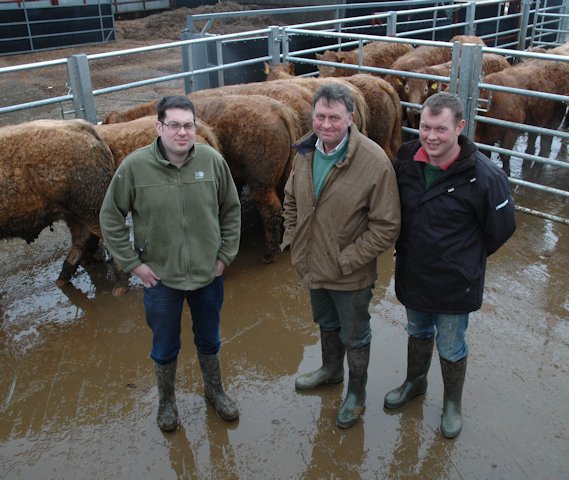 The Watson family, Peter, and his sons, Adam and David report both their Charolais cross Salers steers and heifers are finishing at average heavier weights and faster than McIntosh Donald’s kill of all other Continental crosses. “Our steers have that performance edge worth £249 a head and the females, £557, figures which we can’t deny we’re pleased about, yet we believe our cattle have the genetic potential for even better performance,” says Adam. “However there is always room for herd improvement.”

The Watsons manage Darnford, Durris, Banchory, a 1,500 mixed acre tenanted unit, the majority of which is in the SDA and carrying a 400 cow split calving Continental cross suckler herd which is gradually being replaced by Salers. “This is an extensive unit and every suckler has to justify her existence. Consequently we focus on maximising the number of kilos produced per cow from home grown resources; we produce high quality finished cattle whilst trading the pick of the crop through the Thainstone store ring and they invariably end up within the day’s top 10% of prices.”

Apart from heifers retained for replacement purposes, the rest of the Darnford calf crop are taken through to target finishing weight and sold to McIntosh Donald. Darnford’s Charolais cross steers are currently finishing at an average 400kg at 644 days, a heavier weight and nearly12 weeks faster than the Charolais crosses incorporated in to the Qboxanalysis and almost 14 weeks earlier than the 346,000 head of all other steers. See table 1. Similar trends are demonstrated by the heifers finishing on a similar regime at 352kg at an average 583 days.

“The Qboxanalysis figures are literally the proof of the pudding and we look at them after every kill. They help us to measure up how we are doing against the rest of the abattoir’s throughput and reveal areas where we can improve,” says Mr Watson. “For example, we are keeping an eye on the steers; we believe they have real potential to step up performance.”

He adds: “Our beef enterprise and its performance is a moving target. Since 2008 we have focused on replacing a mixed Continental cross herd with Salers noted for their ease of calving and which we put to high index Charolais bulls. EID tagging every animal, weighing the finishing cattle on a monthly basis and using Qboxanalysis for benchmarking purposes is enabling us to measure and monitor performance and indicate the opportunities for improved management. There is always room to improve herd efficiency.”

Charolais crosses which make up almost 25% of McIntosh Donald’s total kill. They finished at an average 352kgs within 682 days, 22 days earlier and 14kg heavier than the remainder – a mix of Continental cross and native breeds. Those performance benefits delivered by the Charolais crosses are estimated to leave an additional income of more than £125 a head over the remainder, when taking in the current 365p/kg average market price (R4L) and 350p/day costs. See table 1.

McIntosh Donald’s Murray Gibb explains: “The Qboxanalysis system is providing our suppliers with a quick, easy to access and highly accurate analysis of each animal’s classification for benchmarking purposes, both within their herd and as a performance guide against others.

“The feedback also enables them to make more informed decision on their beef enterprise’s management practices. Farmers are encouraged to weigh their animals at a younger age, and thereafter more frequently, batch them according to weights rather than age and select more carefully those ready for slaughter. Suckler producers may need to select more carefully their terminal sires while finishers need to review their feeding diets to achieve better weight gain and earlier finishing.”