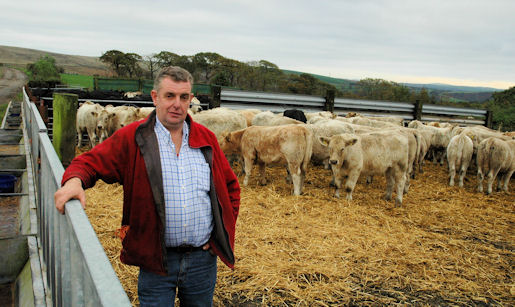 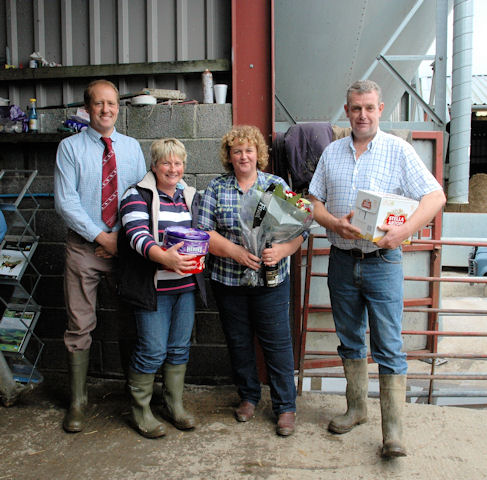 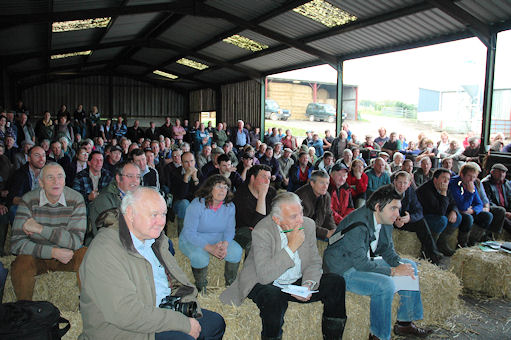 Two hundred commercial beef producers travelled from throughout Wales and beyond to find out more at an open day hosted by Alun and Wendy Jacob and their family at Twlly y Gwyddil, Craig Cefn Parc, Swansea on 13 October and organised by HCC.

Alun and Wendy are winners of the inaugural HCC Welsh Charolais Suckler Herd of the Year, an award that was made on attention to the herd’s genetics, management, health status and marketing.

“We focus on breeding and rearing a medium sized cow put to a carefully selected high genetic merit bull to produce a high quality calf off marginal land,” commented Alun. “We sell all our Charolais cross suckled calves straight off their dams at six months and averaging 350kg target or 1.5kg DLG, through Sennybridge Auction and at Brecon and Radnor Suckled Calf Rearers’ annual sales. The system works well for us, the calves find themselves within the day’s top 10% of average prices and the same buyers keep on coming back.”

“This year, we’ve had so much grass the calves have been reluctant to eat the creep we offer in the final few weeks they’re here, so they’ve not quite made the 350kg target.”

Their 250 cow suckler split calving herd is run on 1,000 SDA tenanted acres plus accompanying hill rights and crossed with high EBV performance Breedplan recorded Charolais sires. To achieve a tight calving pattern, bulls are run with the cows for just 10 weeks and then pulled away.

The couple’s next step is moving towards breeding a closed herd of Angus cross and bigger Simmental Angus cross cows specifically bred to suit Twlly y Gwyddil, for example the 120 spring calving cows are out wintered on the hill and never housed.

The Jacobs are firm believers in measuring and monitoring. Each calf, its sire and dam recorded for ease of calving and new born vigour, after which its performance is tracked: weighing at 100 days ensures it is on a suitable trend to reach target weaning weight, and again at weaning to help appraise the calf’s sire. The target is for steer calves to average 1.5kg DLG at weaning at just over six months of age, and heifers an average 1.4kg DLG.

The Jacobs became convinced that the use of Breedplan data was a genuine tool to help in choice of sire after introducing a team of Charolais bulls specifically selected within the breed’s top 10% for performance EBVs, left calves achieving an average 350kg target at weaning, compared with 300kg by calves sired by a bull with breed average EBVs. That extra 50kg per calf, when multiplied up over 180 calves sold off the farm annually, amounts to approximately nine tonnes of additional beef.

Postscript: The Jacob’s first entry of Charolais cross calves sold through Radnor Suckled Calf Rearers’ Sennybridge centre on 18 October. They weighed an average 312kg to average £850 a head or 272/kg. 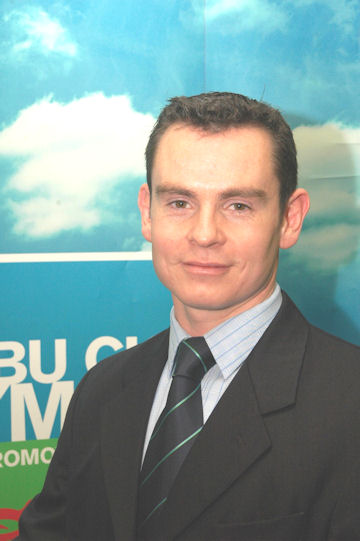 Some cattle will perform better than others quite simply because of their genetic potential, writes Hybu Cig Cymru/Meat Promotion Wales’ Dewi Hughes. The advantage of using high genetic merit bulls has been clearly demonstrated by HCC which collected the weights of 8,400 cattle as part of its Welsh Beef Quality Improvement Project.

Suckled calves by bulls that were in the top 10% of their respective breed’s performance figures gained an extra 0.25kg per day over their lifetime compared to calves from all other bulls. Add together that improved performance and it equates to 137kg over an 18 month period, the difference between profit and loss.

Regardless of whether you are selling suckled calves, stores or finished cattle, weight undisputedly pays, so it makes sense to manage your cattle to grow well and achieve heavy weights at sale. Taking time out to put them over the scales to measure and monitor their performance to determine if they are achieving their genetic potential is time well spent and will pay dividends later on, as will investing in a high genetic merit bull in the first instance.

The weights collected by HCC from 8,400 cattle showed a massive variation between the lowest 20% performing animals who achieved an average 0.65kg daily liveweight gain (DLG) from birth to finishing while the top 20% gained an average 1.25kg DLG. This huge variation highlights the importance of knowing the performance of your cattle so that you can manage them appropriately to achieve your targets. Setting a target selling or finishing weight is a good way of managing your growing or finishing cattle, but it is only useful if accompanied by targets for liveweight gain. For example, to achieve a finished weight of 650kg, assuming 35kg birth weight, at 18 months an animal should be gaining an average 1.12kg per day from birth. 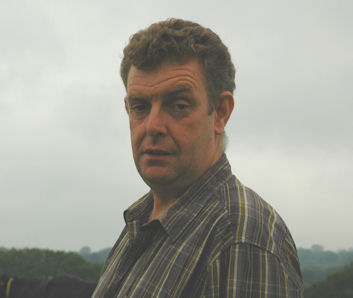 Alun and Wendy Jacob are among those suckled calf producers who are realising the benefits of using high genetic merit performance recorded bulls and making sure their progeny are on track. Their team of three Charolais bulls which qualified for WBQIP funding being within the breed’s top 10% for performance EBVs, are currently leaving steer calves averaging 1.5kg DLG at weaning at just over six months of age, while the heifers are averaging 1.4kg DLG. In comparison, steers by one of their previous bulls which scored around the breed’s average for performance EBVs averaged 1.1kg DLG, and heifers achieved a figure just slightly less.

“The performance difference between the two sets of calves reared in exactly the same management system is quite striking,” comments Alun. “The calves by the high EBV bulls are averaging a target 350kg at weaning, compared with 300kg for those by the average bull. That extra 50kg per calf, when multiplied up over 180 calves sold off the farm annually, amounts to approximately nine tonnes of additional beef, which to us represents a substantial sum.”

The Jacobs manage a relatively extensive operation at Twlly y Gwyddil, a 700 acre SDA unit with accompanying hill rights based at Craig Cefn Parc, Swansea. The tenanted farm carries 200 suckler cows plus replacement heifers, together with a complementary flock of 1,100 ewes. “We started farming here from scratch 20 years ago, we gradually stepped up cow numbers stabilising at the current herd size, and our objective has always been to maximise output per cow from very limited resources,” he explains.

Careful choice of terminal sire has been one straight forward route to achieving the Jacob’s goal. “He’s half the herd and can be easily manipulated. We have used Charolais for the last 20 years because of its ability to leave calves with weight for age, they grow uniformally, they are easy to batch up for market in groups of 20 like peas in a pod, and buyers seems to like them,” he says.

“As far as dam line is concerned, we’ve developed a closed herd of Angus cross and slightly bigger Simmental Angus cross which are suited to this farm. For example, our 120 spring calving cows have to have the ability to out winter on the hill, they’re never housed.” Calves are sold straight off their dams at six months and averaging a target 350kgs, through Sennybridge Auction and at Brecon and Radnor Suckled Calf Rearers’ annual sales, and they usually find their way into the day’s top 10% of prices. “They sell to repeat buyers and we always make a point of talking to these finishers to find out how well our calves performed and eventually killed out.”

The Jacobs became familiar with using EBVs in their terminal sire selection process when they began to use AI in an attempt to choose more accurately bulls with high scores for growth rate, muscle depth and ease of calving. They also carefully selected for milkiness and growth in maternal sires destined for using over 10% of the herd which is used for breeding heifer replacements.

“We found these high EBV bulls were consistently leaving high performance calves, a trend that made us realise the data was accurate and worked,” Wendy explains. “In the last five years, we’ve gone on to prove using EBV performance data and it has become second nature to our decision making. Compared with average bulls, those within the Charolais breed’s top 10% are consistently delivering an extra 50kg growth by weaning and the calves have better conformation.”

The couple record each calf, its sire and dam, ease of calving and new born vigour, after which its performance is carefully monitored. “We weigh every calf at 100 days to give an indication of performance and to make sure it is on a suitable trend to reach target weaning weight. We weigh again at weaning to help us appraise the calf’s sire, to see if it is delivering the performance we targeted,” she says.

Alun adds: “We’ve started to talk to finishers about the potential of our calves by high EBV performance recorded bulls and how they can be differentiated from others. We want them to be able to explore the whole picture, make more informed decisions on our purchases to select the cattle with the highest potential performance and in turn, the highest margins.” 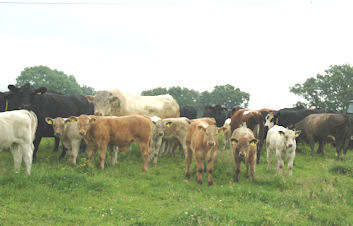