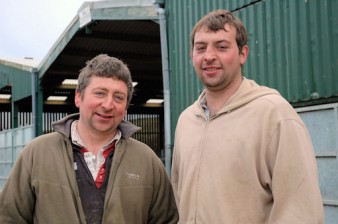 Introducing a Charolais cross bull beef finishing system to a traditional hill suckler unit and feeding a home grown diet is helping James and Alec Cowan to exploit their own resources, maximise their business’s profitability and achieve a more environmentally sustainable farming system.

“We’re achieving 94% calves reared from cows put to the bull, and within a couple of years, we’ve doubled meat output from male calves, reduced feed and eliminated straw costs, and improved gross margin by over 30% to £432 per cow,” James explains. “Furthermore, while the system is more intensive, we’re aware that finishing bulls is more efficient and is enabling us to sequestrate less carbon and reduce the farm’s carbon foot print to 14kg C/kg of beef produced. The last crop of Charolais cross bulls reached 420kg target deadweight at 14 months 15 days, killed out at 63% and graded U2, 3.”

The Cowan’s were among the four finalists of the Welsh Charolais Region Hybu Cig Cymru (HCC) suckler herd of the year. Judge, SAC beef specialist Ian Pritchard commended their system saying: “Their motivation was obvious. Farming on a larger scale and with more beef cows was their driver, but they also recognised that the expansion has to be approached in an efficient manner using the latest technology and advice. Their commitment to furthering their knowledge is evident through their participation in the HCC demonstration farm. The use of high EBV bulls, health planning, reducing reliance on bought-in feed and adding value by finishing home-bred stock are all commendable.”

The brothers, who farm in partnership with their father, John are huge enthusiasts. They manage a 70 cow spring calving suckler herd which is scheduled to double in size in the next three years, while maintaining a complementary flock of 300 breeding ewes at Blaencwmpridd, Synod Inn, Llandysul, a 175 acre unit with a further 180 acres of rented land, all of which is SDA.

“We are dedicated to livestock farming and we are proud to be producers of top quality food. Once we are committed to a decision, we pay enormous attention to detail; we put down the throttle and give it the beans,” says Alec. Their business objectives are clearly defined – to maximise profits enabling them to take up opportunities, cut out their HGV driving and contracting and work full time on the farm.

Furthermore, agreeing to sign up as one of a network of Farming Connect demonstration farms supported by Hybu Cig Cymru – Meat Promotion Wales in 2009, has enabled the Cowans to finely tune their technical objectives. “We’re focused on maximising output from our own resources and carefully purchased inputs, including striving to be self-sufficient in livestock feed – we’re there with energy with homegrown barley and high sugar grasses, but not quite with protein. At the same time we want to maintain a mixed livestock system and we plan to expand the area farmed.

“Sheep tend to be the more popular enterprise in this area, however we are more biased to beef – we’re natural cattle farmers, we enjoy the challenge, and decided to move in to bull finishing which overcomes marketplace variables and enables us to reduce the risk of being shut down in an area rife with TB,” he explains. “We wanted to produce weight and the only way to do it efficiently and profitably was to swap our Continental bulls for Charolais put across all the cows which are maintained in condition score 2.5 throughout the year. Nothing beats Charolais crosses’ weight for age – there’s an average 50kg differential by weaning at six months for starters; they also demonstrate good conformation and quiet temperament.” Bulls are carefully selected within the breed’s top 10% for 400 day weight and calving ease EBVs.

Introducing Charolais as the herd’s terminal sire has also brought benefits for the heifers. “We are selling them in the store ring at 11 months at an average 440kg, 60kg heavier than our previous Continental crosses, and in future, we’re planning to finish them at 380kg to 400kg within 20 months,” says Alec.

The bulls are introduced to creep at three months to exploit growth rate while FCR is most efficient. Weaning is at seven months and an average 350kg. Plans are to improve that figure by introducing creep from day one. Between six and 10 months they achieve 1.9kg DLG from a TMR grower diet comprising 80% homegrown rolled barley, red clover grass silage and 18% CP, while the TMR finisher diet is tweaked to 90% rolled barley, straw and 14% CP to achieve 1.5kg DLG. Growth rates are monitored by weighing each individual monthly.

A total of 30 acres of cereals have been introduced to a seven year rotation along with a kale rape hybrid for grazing and 65 acres of clover rich grassland for clamp silage. “Swapping a proprietary blend for the TMR has reduced the finishing diet cost by almost 40% to £107/t or 1.8p/MJ and a similar amount the grower diet,” James explains. “Homegrown forage has also helped us to reduce the total cost of keeping a cow and calf to weaning by almost 15% to £1.42/day.”

Exploiting genetic potential doesn’t stop with the livestock. The Cowans are keen to maximise crop yields and are implementing best husbandry practices to achieve 4t/acre barley grown at 1,000’. “We are very open to introducing advice and new technology, however we always follow the recommendations. For example, we’re implementing a heifer replacement plan featuring an AI programme using female sexed semen from Angus and Simmental bulls selected with high EBVs for milk and ease of calving. I had training on heat detection and AI techniques before starting to serve our heifers, and we’re achieving 71% conception to first service,” says James. “The programme is speeding up our expansion plans and enabling us to breed quality replacements. Eventually we’ll close the herd down.”

The Cowans have adopted a Farm Health Plan working closely with their vet, Angus Wise who carries out several visits during the year to help monitor target areas. “Together we take a very proactive approach, for example we vaccinate against BVD and Lepto and visit the abattoir to examine all our cull cows’ main organs. The attention to detail pays off and we’re able to minimise the bills.”

He adds: “We optimistic for the future beef market considering the expanding affluent world population. We’re adopting an efficiency improvement programme now so that when the market does improve, then we will be ready to pull in the cream.”